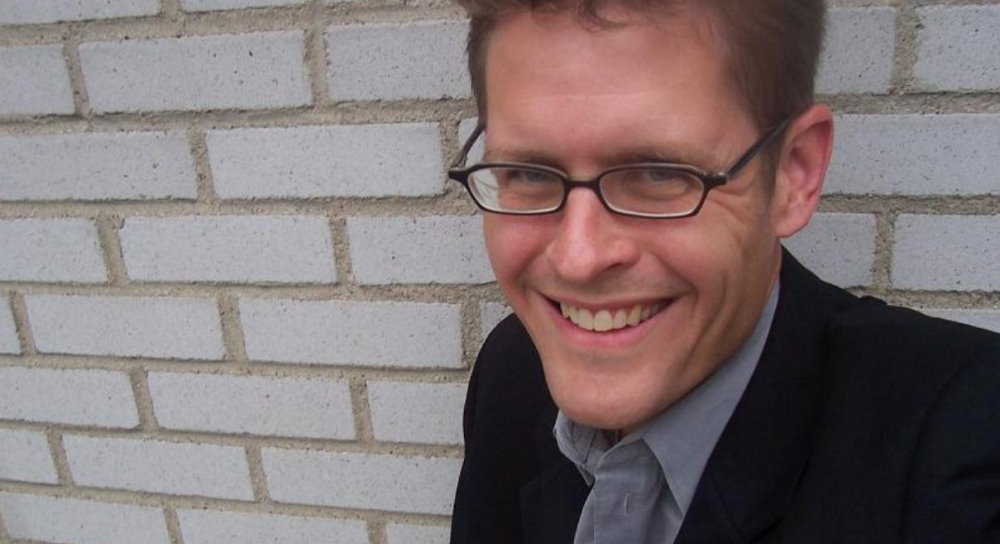 Between 1999 and 2009 Lightsabre.co.uk brought news, fanfic, podcasts and much, much more to the masses. Our one hundred and forty-sixth guest was the co-author of the Essential Atlas and numerous other Star Wars publications – Dan Wallace.

Lightsabre – Welcome back to Lightsabre. It’s been 3 years since you were last here and a lot has happened. What have you been working on since we last spoke.

DW – Three years? You’re kidding! The last three years have been pretty busy – lots of new work including The Atlas, the Complete Star Wars Encyclopedia, the Galaxy at War Campaign Guide, and the second edition of the DC Comics Encyclopedia.

Lightsabre – The Essential Atlas with Jason Fry is one of the most eagerly awaited books to come out in a long time, mapping the Star Wars galaxy from the Core to the Outer Rim and everywhere in between. What sparked the initial idea that lead all the way to having the book in your hands? DW – Simply that Jason and I have been Star Wars geography geeks from way back. We met as members of the America Online Star Wars community back in 1994, when you had to pay for AOL by the hour and it cost precious, precious money in order to monopolize your telephone line and argue over how many fingers Ewoks had. But Jason struck me as a really smart, acerbic guy, and sometime after I released my Star Wars Planets Guide v. 1.0 into the file libraries he shared with me an Excel database he’d been keeping that was basically the same thing – a fan listing of all the planets and systems in the films and Expanded Universe. We kept up correspondence after I started writing for Lucasfilm, including a stint as an advisor for the New Jedi Order map. Those experiences prepared both of us for The Atlas pitch process, and it was Jason who really took the lead in making sure this was a project that Del Rey and Lucasfilm couldn’t refuse.

Lightsabre – The book took a solid 3 years to research and compile. Being a fan from way back and having compiled your own Planets Guide back in the mid 1990’s (the layout of which Lightsabre used as the basis for its own Setnin sector Guides), knowing the scale of the task you and Jason were undertaking did you really imagine it would be as huge a task as it ended up being?

DW – Every task seems smaller than you think at the outset. I don’t think I really anticipated the challenges of making simple maps. Most of the work I’d done previously with the New Jedi Order consisted of me sketching things on a piece of paper. The Atlas maps, because we were doing them collaboratively and in succession, required me to undertake a crash course in Photoshop layers. A second challenge came when new information threatened to derail what we’d already done. The Old Republic MMO was one such project. Another one was the Lost Tribe of the Sith ebooks. 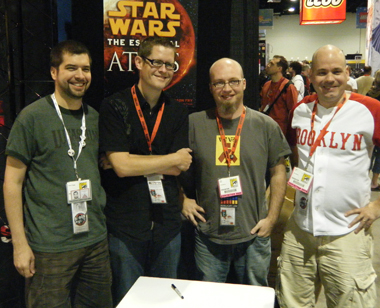 Lightsabre – Working your way through the book, how did you lay it out and plan it? Being such a gargantuan task, did you decide which worlds would be in there and start that way, or did it have to be more fluid given the constant additions to the Holocron that re happening with the comics, books and TV shows?

DW – I think we decided on the planet line-up as early as the outline stage. The overall structure didn’t change much. It was the details that changed, such as how to incorporate The Clone Wars television show (which took a looser approach to continuity) and how to deal with new revelations like those in the MMO.

Lightsabre – There must be an aspect of the book which really strikes geek gold in your Star Wars heart. What would that be?

DW – Loved the chance to detail the Twenty Wonders of the Galaxy. This is something I’ve wanted to do since working on the roleplaying book Geonosis and the Outer Rim Worlds, where I described the Tract of Makem Te (a gigantic field of marble squares many times the size of Texas) as one of the Wonders of the Galaxy. The Atlas provided a slightly self-indulgent opportunity to explain all of them, and also to get two great illustrations from Chris Trevas. As can probably be gleaned from the entries, I worked off the classical Ten Wonders of the Ancient World for inspiration, creating Star Wars analogues for the Colossus of Rhodes and the Hanging Gardens of Babylon. Blame too many hours playing Sid Meier’s Civilization.

Lightsabre – The illustrations by Chris Trevas, Ian Fullwood, Modi and Chris Reiff are absolutely stunning and elevate the book from what could have been a collection of dry maps and sta rcharts into a real event for Star Wars readers. What collaborations were there between you, Jason and the artist team? 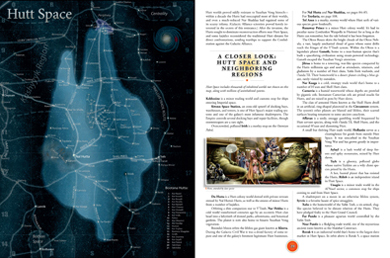 DW – Modi was the first one on board. As a fan, he had created some fantastic (and fantastically-accurate) maps, so we brought him on board initially as a consultant and then as a full member of the creative team. Chris Reiff came on board to help share the map load, and Chris Trevas came on board to do the portraits and action scenes. Everybody did a stunning job. With Modi and Chris Reiff we had more technical conversations, along the lines of “this planet needs to go here,” and with Chris Trevas we gave him some guidelines on what we wanted the illustrations to look like and he took it from there. I don’t think there was a single Trevas illustration that we were disappointed in or needed to redo.

Lightsabre – As mentioned, Star Wars is an ongoing and ever expanding universe. Given that the Tomart guide never continued due to continual additions to the collecting world, what are your future plans for The Atlas? Will it eventually become an online venture, or will we be lucky enough to see additions, modules or even complete updates of The Atlas?

DW – We have our own little corner of the official site carved out especially for The Atlas. If you visit the Atlas page online you can see all the extras we’ve assembled so far, including a complete series of endnotes, a behind-the-scenes article, an online-exclusive Sector Map, and an online copy of The Atlas appendix which lists all 4400 known systems in the Star Wars galaxy. The advantage of the online appendix is that we can fix mistakes on the fly.

I don’t think The Atlas will be online-only in the immediate future. The book is lovingly designed as a book. It’s got a larger trim size, high-quality paper, crisp full-color reproduction – it’s just a gorgeous thing to hold in your hands and leaf through, and we can’t recreate that tactile experience online. But the online medium can do things that the print medium can’t, namely fix mistakes easily. Look for us to explain errors online and answer reader questions, as well as provide any updates that we simply couldn’t fit into the book due to deadlines. Lightsabre – Would you ever envisage a scenario where fan fiction locales could be worked into the official fabric of the Star Wars Galaxy?

DW – I’m a big fan of fan fiction, but the only kicker is that it’s tough to put it into an official capacity without the right context. The “What’s the Story” contest that used to be up on the official site was a fun way to officialize fan creations. Without that officialization we wouldn’t be able to add fan fiction content wholesale. The closest might be to include a reference or two as a tribute or in-joke.

Lightsabre – A book like this has so many uses for Star Wars fans, primarily for roleplayers. Are there any crossover plans for The Atlas to become part of the Wizards of the Coast line, perhaps as a companion guide.

DW – That’s a good idea. No direct plans, but you’re right that we really tried to make this book feel like a roleplaying guide, in the sense that the old West End Games sourcebooks used to provide reams of data about planets, species, vehicles, weapons, and more. Both Jason and I are big fans of roleplaying materials (even if neither of us is a big RPG-er) and it was foremost in our minds to create something worthy of that milieu. I’ve continued working for Wizards of the Coast in the meantime, with Galaxy at War out now and a sourcebook on the Unknown Regions due out next year. 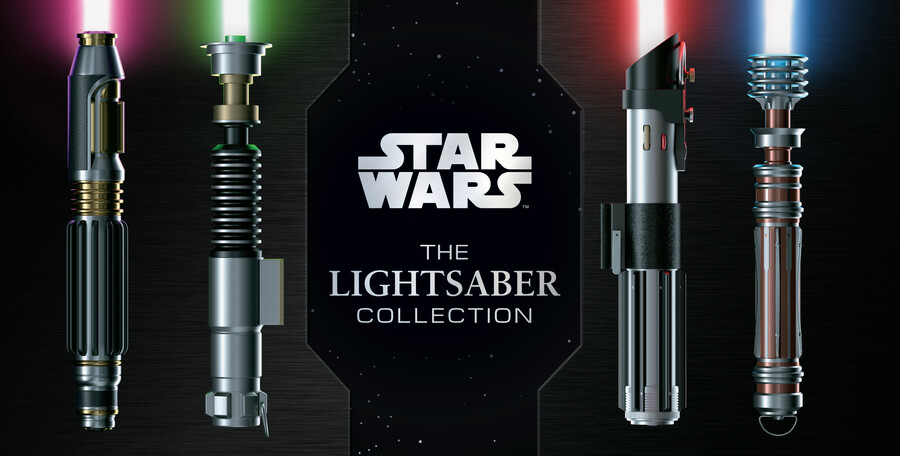 Lightsabre – You must be bushed after 36 months on the project. When did you know it was time to say ‘enough!’ and send it to the presses?

DW – When the deadline arrived! The book got pushed back once or twice, and every time Jason and I breathed a sigh of relief because it gave us more time to finish what we needed to finish. But eventually, our editor told us that this time the deadline was real, no foolin’, and we just had to let things go. Any after-the-fact additions or corrections will probably go up on the Atlas page online.

Lightsabre – What has the feedback been from within Lucasbooks? Leland Chee must have had a field day with this cornucopia of information?

DW – The feedback has been really positive, and everybody at Lucasfilm has been great. I can’t imagine how much info Leland has had to incorporate into the Holocron. I doubt it’s been a picnic for the folks at Wookieepedia either.

Lightsabre – What’s next for you after The Atlas?

DW – I’m in the middle of a really fun Star Wars project at the moment. It won’t be out until 2010, but it should provide a very interesting look at the Jedi.

Lightsabre – Thanks for being our guest again on Lightsabre. One final question. A secret cabal of Star Trek fans usher you into a room at a convention and offer you untold riches to include Vulcan, Andoria and Ferenginar on the next Atlas. Do you:

DW – I take the money, but insist on payment only in gold-pressed latinum. Naturally, since latinum cannot be replicated the Trekkies will have to withdraw their offer and will have no choice but to offer the money to my bearded duplicate from the Mirror Universe instead.

This interview was originally posted on lightsabre.co.uk on 27th September 2009.