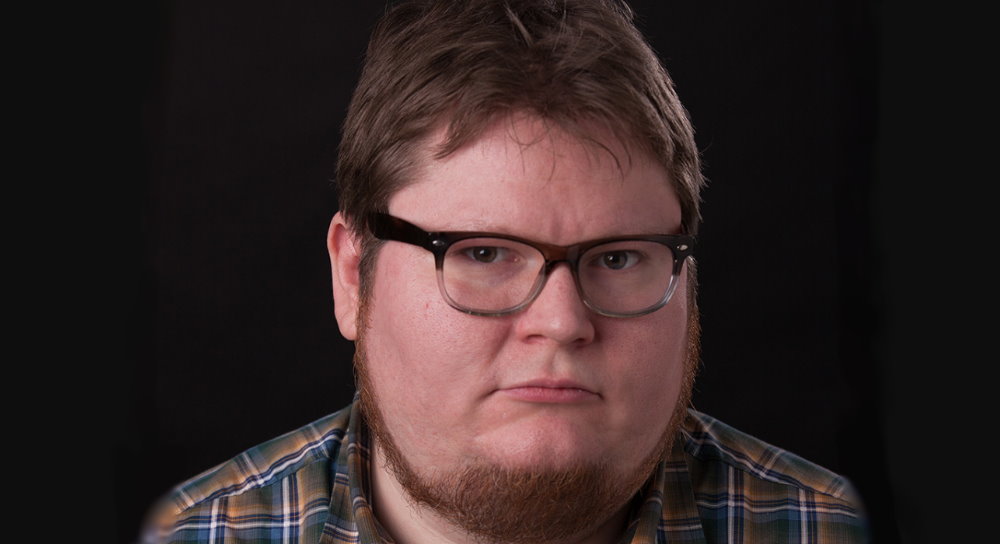 Between 1999 and 2009 Lightsabre.co.uk brought news, fanfic, podcasts and much, much more to the masses. Our fiftieth guest was at the forefront of one of the longest-running  fan sites, and the first one to have its own domain name: JediNet  – Jim Fisher.

A – Thanks, I’ve been a fan of Lightsabre since I found out it existed, it’s good to sit down and share some thoughts.

Q – Star Wars has had a profound effect on all of us – it’s why we’re here talking about it, but what was it that started you off on your Star Wars journey?

A – Heir to the Empire.  Well, it sort of restarted the journey.  I had loved Star Wars growing up, seeing it on VHS, but I had kind of drifted away as I got older.  Heir to the Empire came out when I was in middle school – 1992?  I was 12 then.  I think I read it a bit later, around ‘93 or ‘94.  It got me interested in seeing the movies again — I had been playing X-Wing on the PC at that time too. 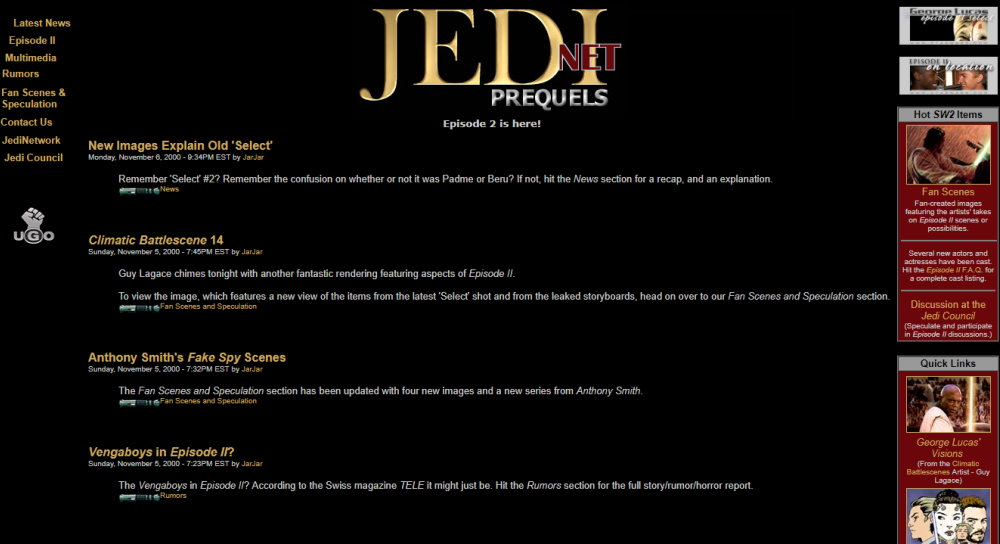 The Zahn Trilogy was something I really embraced and I found an online community by way of CompuServe — this was before regular ‘net access was commonplace, most people used AOL, CompuServe or Prodigy to get online.  I met some great people over their, and a few of us started up a fanzine called Echo Station. Lee Brown, who you may remember from NewsDroid.com, was the driving force behind the fanzine. We started that in ‘96 or so — by that time I also had a web account and was running a Star Wars Humor archive as well as The Wedge Antilles Home Page… and maybe even a book listing?  It’s been ten years, things get blurry. Lee left Echo in ‘98 over creative differences and I followed shortly afterwards. The Wedge page turned into rebelpilots.com in 1999, which was hosted on JediNet’s server. That site was up until the end of 2001.

Q – JediNet was started many moons ago and is acknowledged as one of the original fan sites.  How has it been taking over such an established and well-known site and moving it forward into the 21st century?

A – Well, some more background – I left the Star Wars community in late 2001. I had lost interest and needed to concentrate on college – not classes, obviously, but having a good time and enjoying life.

I kind of got interested in coming back to Star Wars in 2004. I signed up for an account over at T-bone’s Galactic Senate message boards and started getting a feel for the community. It had definitely changed in 3 years, but I was amazed to see some familiar faces from the old JediNet chat server.

I am always someone who needs to have some sort of creative outlet, and I thought it was time to apply that once again to Star Wars, so I started tossing around ideas for a new project. Nothing stuck, unfortunately, but in August of that year I got a message letting me know that John Benson, who had run JediNet since its inception in 1996, was shutting the site down.  I sent John a message letting him know I’d be willing to take over and we made the transition that September.

I immediately did my best to shake things up, giving the site its current design which I love, but in all honesty a couple staff members hated. My goal was, with Revenge of the Sith coming out in 2005, to make the site the best resource for news on the film and events surrounding it. I think I did a pretty good job, but honestly my interest in Star Wars begin to fall off a bit after the release of the film. Now we’re almost a year past the release of the film, there isn’t a lot of Star Wars news coming out, JediNet’s traffic is decreasing and I’m spending very little time on the site. That’s very typical for me and projects I work on, but I will always post an interesting bit of news if I see one.  I never wanted JediNet to regurgitate material on StarWars.com or report completely tangential Star Wars news like “Jake Lloyd in Jingle all the Way 2: Jingle Harder” like you see TF.N doing all the time, so we don’t update as often. 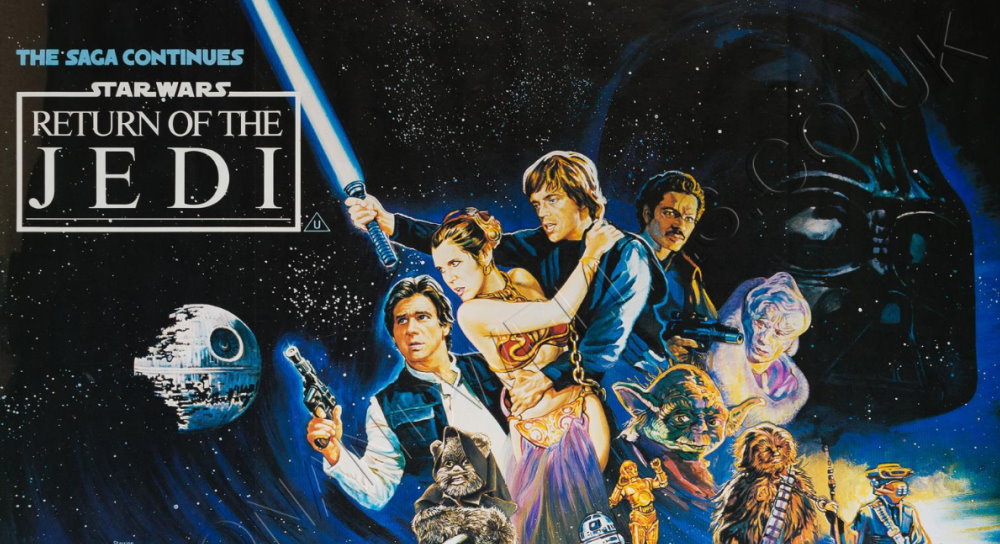 Q – Which of the six episodes stands out as your favourite?

A – Oh wow. The standard answer was always Empire. I’ve actually learned to appreciate Return of the Jedi more and more over the years. It lingers a bit too long on the Jabba act, but it’s my favorite to watch at this point.

Q – What is it like to be involved with such an integral part of the Star Wars phenomenon?

A–   I don’t think I’ve been involved in anything integral. Web sites are fun, and its’ nice to do something for the community, but when you compare me to a gaffer on one of the movies… the gaffer is more integral.

Q – As a fellow fan you must have many golden Star Wars memories.  Tell us about some of them.

A –   Trudging through the mud in Denver in ‘99 comes to mind immediately.  DragonCon 2000 was a blast, but Celebration 3 had the best memories. I got to meet and spend a lot of time with old “online friends” that I’d known, in some cases, for years. Enough alcohol to make things fun, but not so much that I was laying down on a bed rapping and making snow angels. So yeah, the conventions are the best memories, without a doubt. 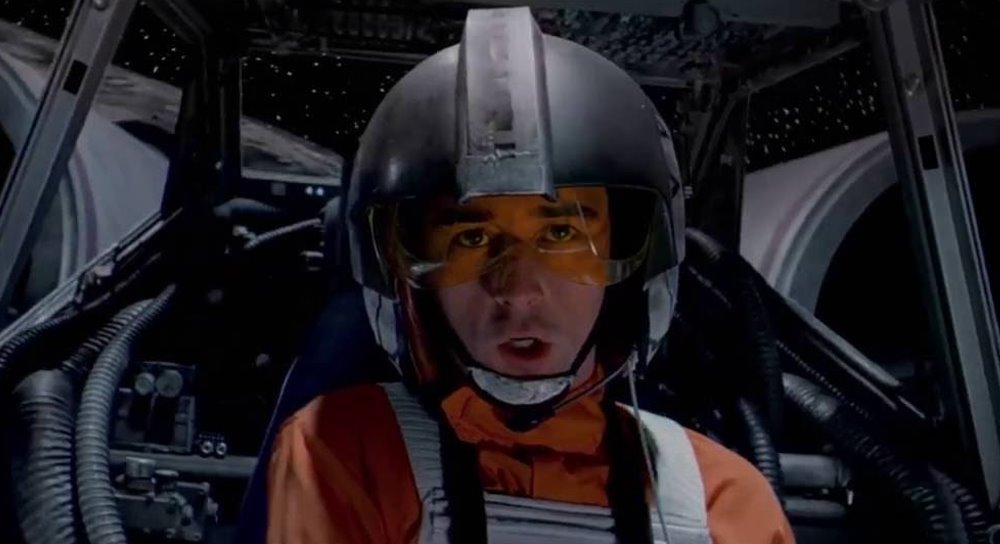 Q – Which of the Star Wars characters is the closest to you?

Q – What would you change about Star Wars if you could go back in time and make alterations?

A – Not a thing. The films are Lucas’s to do with as he pleases. I’m not happy with changes made in ‘97 and ‘04, but I’ve got the original versions of the films to keep me happy. As a filmmaker, Lucas should be allowed to make his own decisions and his own mistakes — I’m not arrogant to the point where I think I can do a better job than he did, which is what fan alterations are really about when you get down to it.

Q – JediNet places much emphasis on the collecting side of Star Wars.  As a fan and collector what sparks your imagination the most?

A – I’m not much of a collector, personally. Shada runs our collecting section and she does a great job. I bought my first Star Wars toy in a couple years the other week — a Darth Vader that transforms into a TIE Fighter. It’s the coolest thing ever, and will be until I buy a new Star Wars toy.

Q – JediNet has also spoken to some prominent members of the Star Wars saga.  Which interviews have been the most enjoyable?

A – I had the pleasure of interviewing Gil Taylor last year. Gil was the cinematographer on A New Hope. He also worked with such directors as Stanley Kubrick (Dr. Strangelove), Alfred Hitchcock (Frenzy) and Roman Polanski (Repulsion). As a cinephile and someone who aspires to make films it really made me happy to be able to talk to a great cinematographer who had worked with some of the greatest directors of the last century. 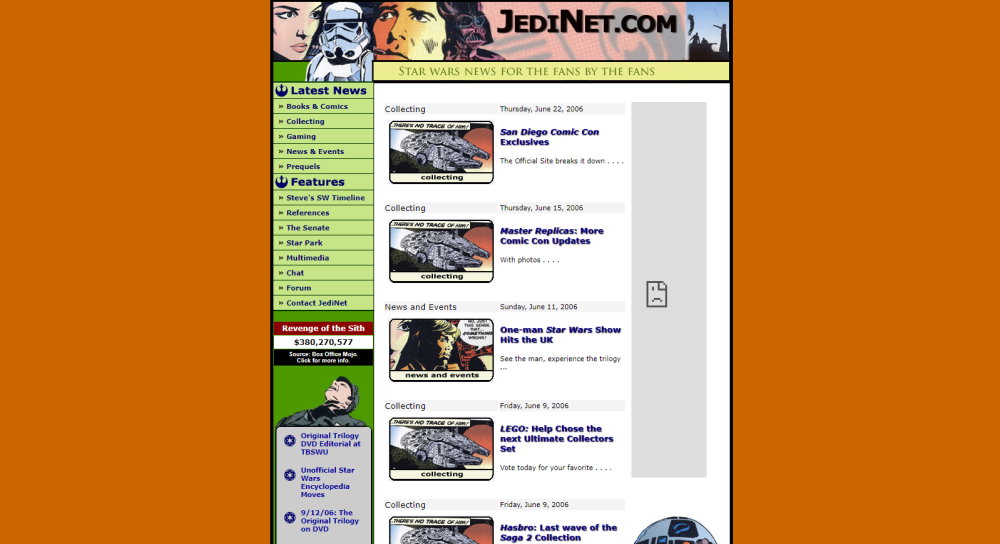 Q – Now that Revenge of the Sith has been released, where do you think Lucas will take us next on our trip through the Star Wars galaxy?

A –  TV, no?  That’s what I’ve heard.  I’m kind of in Star Wars hibernation mode until that happens. I picked up the new Outbound Flight book and am having a hard time getting into it — I plan on finishing it, but it may end being one of those books I put down halfway through and don’t pick up for another month or three.

Q – What do you foresee for yourself and JediNet in the future?

A – Hanging around until the TV show starts up and then making an impression again. In the meantime, I’m going to give myself a shameless plug. Go to www.downeffect.com and take a look at my last two movie projects, one of which is available as a free download optimized for the iPod.

Q – A quick question about our site, Lightsabre.  Any comments?

A – Great site — I’ve always enjoyed the interviews and I’m glad to see that you guys are keeping it going.

Q – It’s been a great interview, and thanks for being our guest on Lightsabre.  Just one final question.  Luke, and Chewie are sent on a mission to Las Vegas and are given a budget of $1000 to spend on their trip.  What would the three of them spend their cash on?

A – Drugs and hookers?  No, that’s not appropriate?  How about just drugs?  We could call it “Fear and Loathing in Las Vegas.”  That’s been done?  Oh well…

This interview was originally posted on lightsabre.co.uk on 13th August 2006.