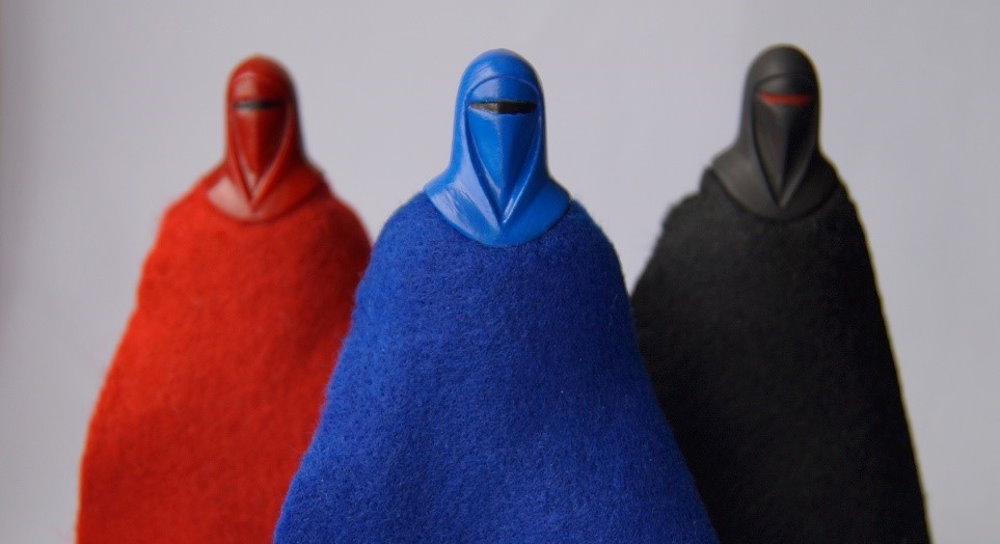 I’ve always enjoyed Star Wars conceptual armour designs and their evolutionary developments from one episode to the next, such as the Royal to Imperial Guards or Clone to Stormtroopers.

Throughout the prequel trilogy, each episode presented Royal Guard design changes but with one constant, their resplendent Royal Blue robes. Although retrospective, when we reach the original trilogy finale, Return of the Jedi, we are treated to their full transition from blue Royal Guard to red Imperial Guard. Their evolution continue in the Expanded Universe but in canon we witnessed a new style in the sequel trilogy The Last Jedi’s Praetorian Guards. 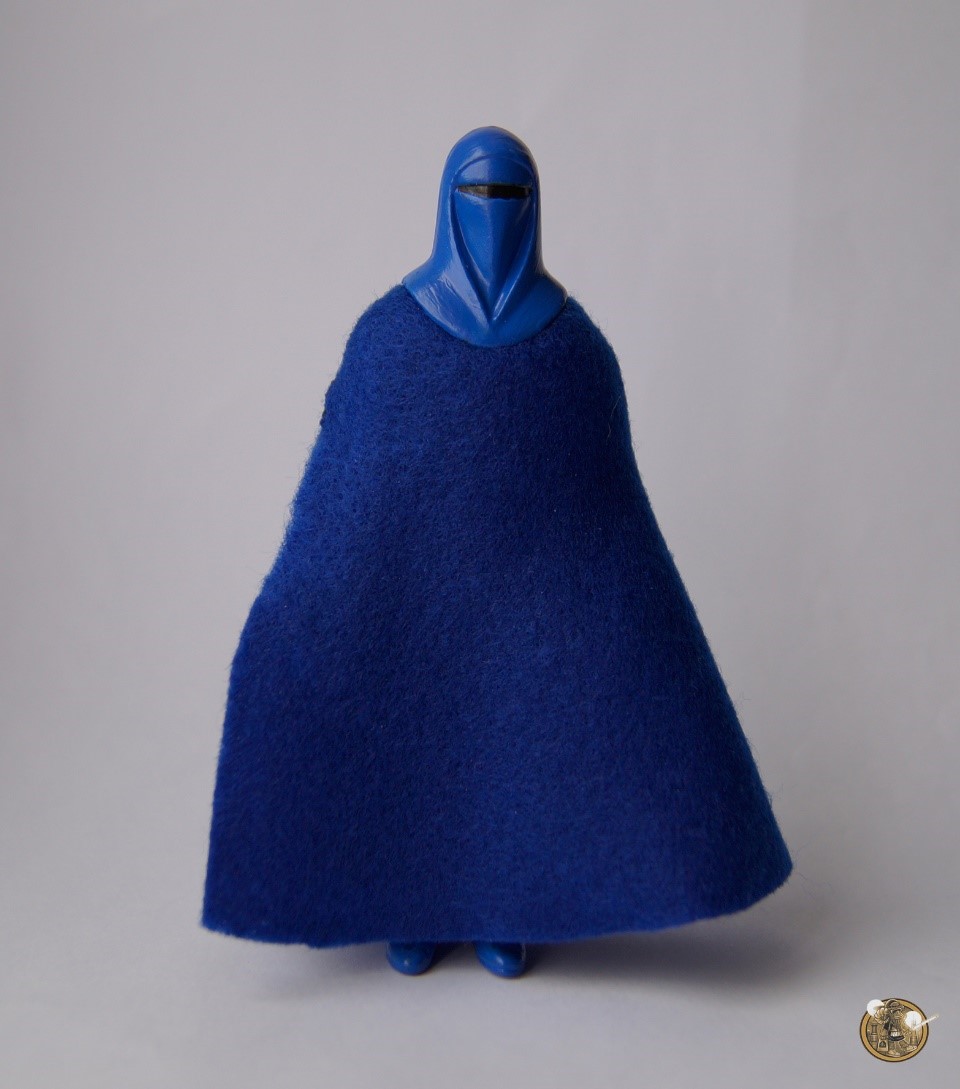 I envisioned a creating a concept custom representing the final evolutionary cycle from Royal to Imperial Guard.

Following my previous Fantha Tracks article using four of my vintage fodder Imperial Guards, two for restoration with the other two used to create vintage Shadow Imperial Guards, luckily I found another helmet and torso, which was going to form the base for this custom project.

I ordered some Royal Blue felt sheets and while awaiting their arrival I worked on preparing the figure. As with my other figures, this figure was missing both inner and outer capes and snapped neck joint. I fashioned a new neck peg using plastic modelling rods. Using my trusty pin drill to bore holes into the torso mirroring this alignment for the helmet.

The figure rested for a few days until the felt material arrived. I wanted to make sure that the colour suited my purposes, which doesn’t always work out when comparing with a picture sample. Thankfully this felt was just right for this project.

This mail call sparked an energetic couple of hours from parts to completed project.

Using the re-usable templates I developed from Toy Polloi’s free downloadable Imperial Guard cape templates, I cut the inner and outer capes. The inner cape’s neck hole was made using my leather belt punch. I matched the colours to a thread then set about stitching both before turning inside out.

Moving onto the figure, unfortunately I didn’t have a shade of blue acrylic which matched what I required. I did however have a dark blue gloss acrylic and a white matt acrylic. I used a mixing jar and added some of the blue with some drops of white regularly mixing and adding more white until I reached the colour I wanted. Now I had a good supply of the colour I wanted with the added benefit of the gloss being tempered by the matt pigment. For me, this was perfect as I wanted a subtle sheen for the helmet. I don’t like using straight gloss paint as I find the shine over bearing unless tempering with a matt varnish. 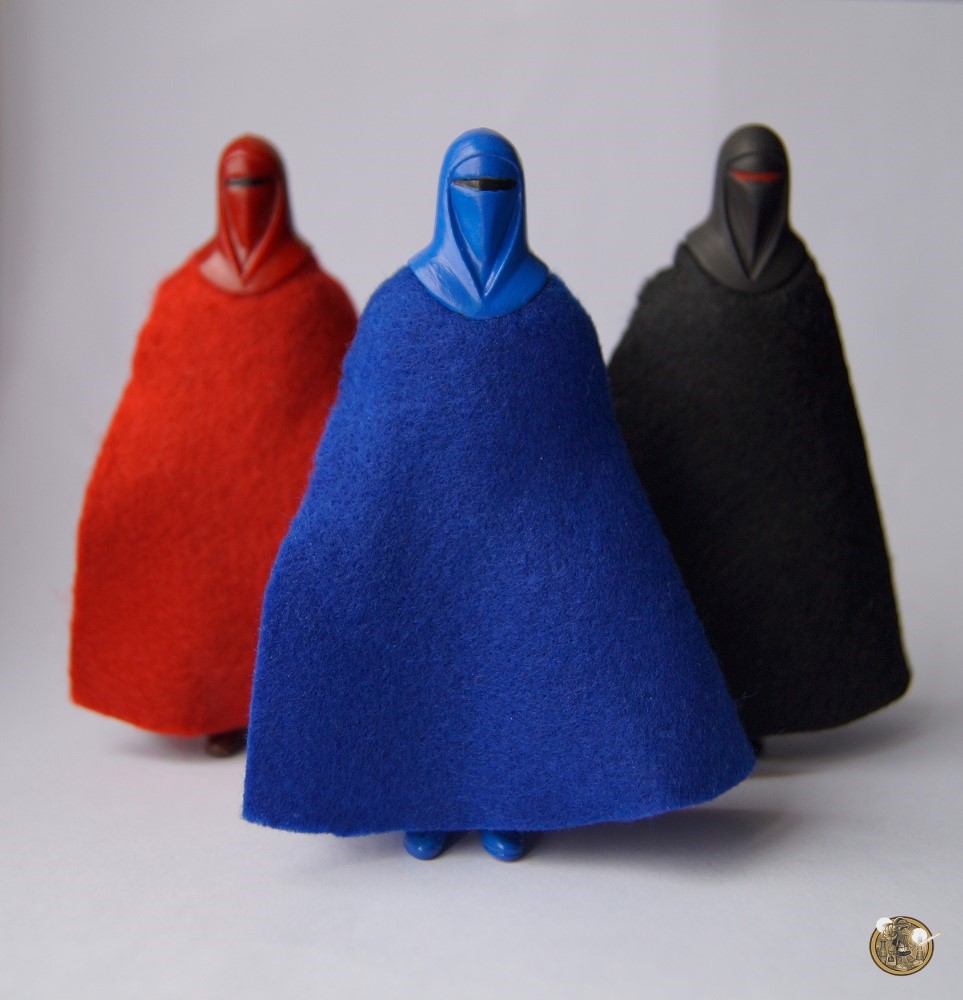 A good couple of coats were carefully applied to the figure with a little matt black acrylic paint used for his visor, as he was missing some paint with the red bursting through.

When dried, which didn’t take too long, the figure was fed into the inner cape feet first. The plastic rods were then tipped with super-glue before slotting into the prepared neck holes. The inner cape was looped over the shoulders with the neck hole fitting around the new neck pegs. This was followed by the over cape and with both capes in the right position, some super-glue was added to the rod tips before sending the helmet home and holding everything in place.

I’m really happy with the look of this new custom figure and with pre-prepared paint and felt material left over, I hope to create another as I prefer these figures in pairs. My challenge now is to source another suitable Imperial Guard as I won’t commit to custom projects on vintage figures unless the figure is well beaten.

I have included a picture encompassing both this and my previous custom project. The display features three vintage Imperial Guards, featuring left to right: Restored Guard, Evolution Royal to Imperial Guard and Shadow Imperial Guard.