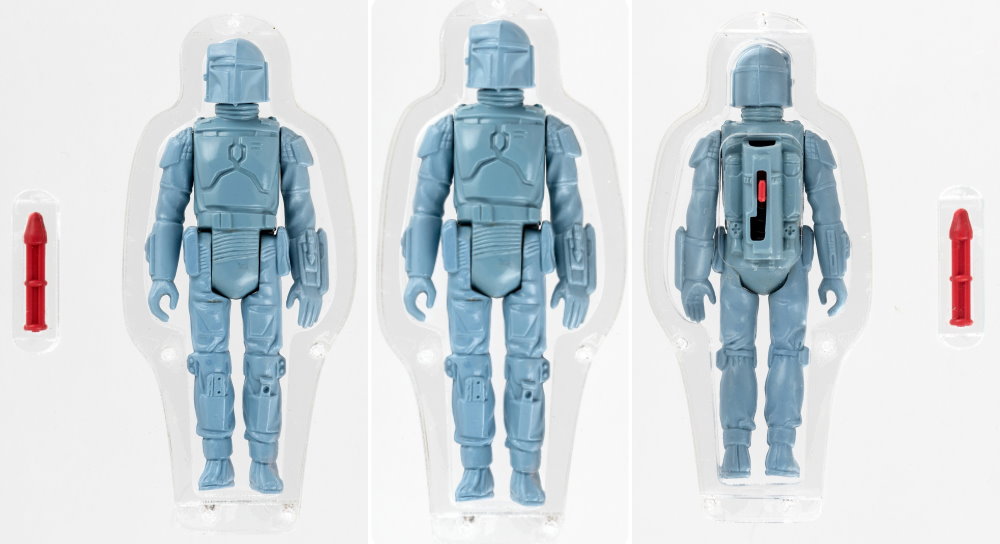 Remember when your folks told you to stop playing with toys, and then dumped them in a box and gave them away to the kid down the street? That didn’t happen to me, but it did happen to some kids, and the news that Star Wars toys can hold and increase in value to a crazy amount might just make them regret it. That said, an L-slot Boba Fett wouldn’t be in many kids collections, and that’s why this beautiful example sold at a York County auction last week for 112,926.

The 3.75 inch action figure was a prototype, which was expected to be released as part of Kenner’s licensed toy line for the 1980 release of the Star Wars sequel “The Empire Strikes Back,” Hake’s officials said.

And Hake’s brought us this interesting news regarding a future auction.

It’s no secret that Star Wars fans regard the Rocket-Firing Boba Fett as a holy grail and countless collectors remember sending away for this fabled figure only to be disappointed upon receipt of the production figure, which no longer featured the advertised rocket-firing capability.

This storied remembrance, combined with the limited availability of genuine prototype action figures has resulted in quite the bounty on everyone’s favorite bounty hunter. Hake’s set an auction house record for Star Wars toys when we sold an AFA 85 L-Slot prototype in our March 2018 auction for $86,383. We just broke that record, with a different AFA 85 L-Slot prototype selling for $112,926.

As tantalizing as that is, we are very excited to announce an item in our upcoming Fall auction – an AFA 85+ graded example of the even rarer J-Slot Rocket-Firing Boba Fett prototype. Time will only tell where bidding will end on that piece.

So there’s a J-slot coming up for auction soon, and there’s no telling how high that even rarer item will go, so stay tuned.

The Mandalorian: How Pedro Pascal’s character differs from Boba Fett

D23 Expo: Will Boba Fett be in The Mandalorian? “Boba Fett is not” says Jon Favreau