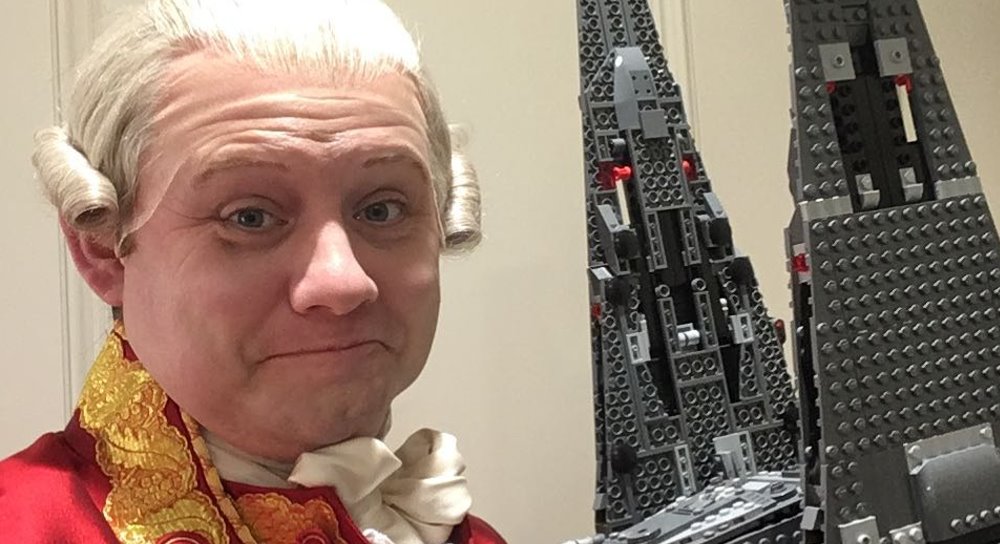 Prince William and Prince Harry weren’t the only British Royalty on the The Last Jedi set. Their 4x great-grandfather, King George III, was there too. Kind of.

Okay, I’m the first to admit that headline and intro was a tad clickbaity but I hope after reading this The Last Jedi related article You’ll be back, time will tell, You’ll remember that I served you well, Oceans rise, Empires fall, We have seen each other through it all, And when push comes to shove, I will send a fully armed battalion to remind you of my love! Da da da dat da dat da da….

Sorry, I’m getting carried away and ahead of myself. You see I was fortunate enough to experience the London West End production of Hamilton on January 11th (Alexander Hamilton’s birthday) and met several of the cast afterwards at the stage door. One of those cast members who kindly stopped by to say hello to fans and sign programmes was Michael Jibson who plays King George III in the blockbuster hip-hop musical created by Lin-Manuel Miranda, who also co-created Jabba Flow with J.J. Abrams for The Force Awakens.

After meeting Michael I wanted to thank him and the rest of the cast and crew on Instagram for an incredible Hamilton performance. That’s when I discovered fandoms had collided without me realising it and that Michael had played Kylo Ren’s command shuttle pilot, Lieutenant Jober Tavsen, in The Last Jedi.

I’m a sticker in a @starwars sticker book! #bucketlist

I’ve seen The Last Jedi five times now in the cinema and on every occasion Michael’s memorable reply to Kylo/Ben after he force pushes Hux to the shuttle floor got laughs from the audience, much like his King George III role and songs bring levity to Hamilton.

What does King George III do during the show? Build the ship I pilot in #thelastjedi! Built this over 3 and a 1/2 shows! #KG3 #KylosShuttlePilot @hamiltonwestend @starwars @lego #starwarslego

As you can see by his Instagram posts Michael not only enjoyed his role in The Last Jedi but he also likes to geek out building Star Wars Lego during his down time when his character is not required on the Hamilton stage.

So if you’re young scrappy and hungry, don’t want to feel helpless like you’re running out of time, raise a glass to freedom and be in the room where it happens to see Michael and Peggy perform in Hamilton, wise up and click boom the source link below for more info to get the job done and take a shot at purchasing a ticket if you’re willing to wait for it because history has its eyes on you. (sorry not sorry)