On July 20th 2019 famed Manchester venue ‘The Deaf Institute‘ will host a special music and comedy night for fans of Star Wars, Back to the Future, Marvel, Ghostbusters and other popular franchises, as geek-centric band Blues Harvest will be performing classic movie soundtracks alongside special guests Pop-up Puppet Cinema with their ‘Back to the Future’ puppet show. 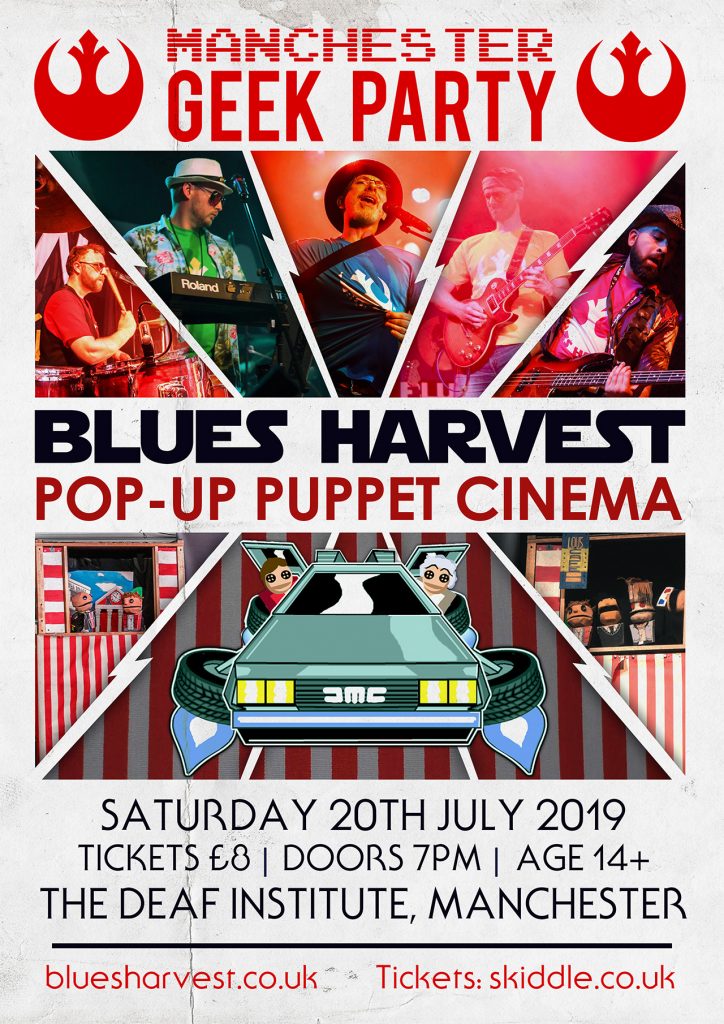 Taking their name from the working title of Return of the Jedi, Blues Harvest are the UK’s most in-demand band for comic conventions across the UK and beyond.  Fronted by comic book illustrator and writer Nick Brokenshire (Star Wars Adventures / IDW / Dark Horse / 2000AD) the band perform songs featured in hit movies such as Guardians of the Galaxy, Back to the Future, Thor: Ragnarok and Ghostbusters, as well as their own Star Wars parodies featuring original arrangements of the iconic John Williams score.

They have performed shows at the National Space Centre, Disneyland Paris, Star Wars Celebration Chicago and recently were joined on stage by special guest Ray Parker Jr for a show-stopping rendition of his hit ‘Ghostbusters’.  The band even counts Luke Skywalker himself a fan, as actor Mark Hamill described one of their Star Wars songs (Tatooine Sunset) as “Magnificent! I now declare THIS as my official, unofficial Luke theme song!”

The night will open with special guests Pop-up Puppet Cinema who are bringing their adaptation of Back to the Future to Manchester.  Imagine the Muppets taking on Hollywood, Pop-up Puppet Cinema take their favourite movies and retell them using puppets.  The hilarious troupe was described by Starburst magazine as “Crowd pleasing, slick, and above all extremely funny” whilst RAD Screenings describe them as “Truly original and utterly hilarious!”

So whether you’re a Rebel, Avenger, Ghostbuster, Time Traveller or Jedi you’re destined to have a great time with Blues Harvest and Pop-up Puppet Cinema at their Manchester Geek Party on July 20th.  Wear your favourite nerd t-shirt or cosplay as your favourite character and geek out with the best entertainment this side of Mos Eisley!

Made In Space (Live) by Blues Harvest, out now on Spotify

WORLD PREMIER: The opening track from the new Blues Harvest album ‘Made In Space’