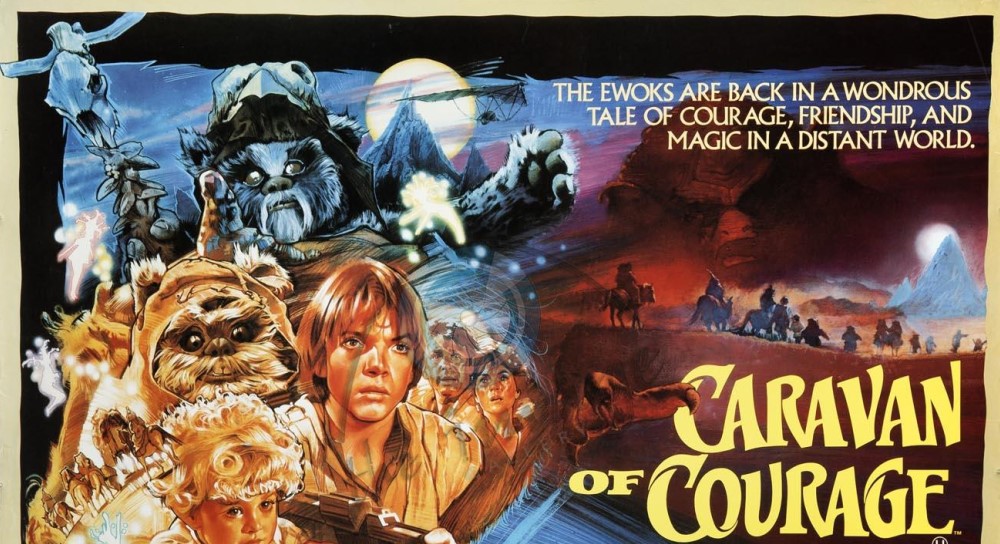 Caravan of Courage – aka The Ewok Adventure – is 33 years old today. Premiering on ABC as its movie of the week on the 25th November 1984, its a film that’s often struggled to find a place in the wider story. Was it set before Return of the Jedi, or after?  Does it even matter? Caravan has more of a fairy tale feel than any other Star Wars story, and if a mother wookiee was to ever read a bedtime tale to her sleepy child, this would probably be it.

Here’s what four members of Fantha Tracks think of the film. Let us know what you think in the comments below.

I understand that Caravan of Courage: an Ewok Adventure was originally supposed to be a short 30 minute TV special but ultimately was fleshed out to be a full film. This would make sense as it feels like 30 mins of plot crammed into over an hour and a half of film. On the positive side the production levels are quite high, considering, and any chance to see Warwick Davis as Wicket is worth the price of admission.

Upon re-watching there were many things that surprised me.

• The moon of Endor sure looks different with its wide-open spaces.
• Ewoks know lots about drugs and seem to now have magical powers!
• Is this the first Star Wars film to use hand-held shaky cam to show action and danger?
• is “Ooooooooh Fitch” an Ewok expletive?

This film won’t make it on to my annual watch list (Holiday Special I am looking at you) however, watching it from a production values view point alone made me glad I revisited.
Quick bit of personal trivia – I was sold my copy of Caravan of Courage by a rather special vendor. I was persuaded to buy it by none other than Warwick Davis himself!

What is a Caravan of Courage? Is it a six-berth holiday home on wheels with 20 people crammed inside being towed along by an Austin Princess at 70mph on a pot-holed British motorway? No. It’s worse. It’s much, much worse.

By the time the Ewoks made it to their own movie I was 14 years old. My attention had very much turned from a love of Star Wars, to an interest in the opposite sex.

I used to collect Return of the Jedi Weekly, and just prior to Christmas 1984 the front cover had a still from the movie. I was not impressed. To this day I have never seen the film all the way through. I have seen enough to form an opinion.

Had there been a more tangible spin-off following Return of the Jedi, who knows, maybe I would have stuck with the saga. However, I have to say the dreadful Caravan of Courage – probably more than any other factor – forced me into a five year hiatus.

It’s probably difficult for some of the younger generation to imagine, but there was a time when Star Wars all but disappeared. On the basis of not just one, but two Ewok movies, I can see why.

Thank goodness for Timothy Zahn. His Thrawn trilogy at the beginning of the 1990’s is attributed to Star Wars renaissance.

So please Disney, no Porg the movie. You have been warned!

Three years ago, writing over at StarWars.com, I took at look at Caravan of Courage on it’s 30th anniversary, and here I am, three years later and now writing at Fantha Tracks, looking once again at The Ewok Adventure.

For me, Caravan is very closely tied to Return of the Jedi. Not in terms of quality – the two films are light years apart, in budget, scope and ambition. No, as fans of the time, we knew that George Lucas was beginning to ease away from the GFFA. We had an animated Ewoks series, the fantastic fun of Droids, the ongoing first run of Marvel’s Star Wars title, the final tri-logo waves of Kenner’s figures and not much else. A live action return to the forest moon of Endor was irresistible.

Now, let’s not get carried away. Jedi was ILM’s magnum opus, their graduate thesis as Dennis Muren put it at the time. Caravan was a made-for-TV movie that, while nailing the title of the most watched TV film of the year with 65 million viewers and nabbing two Emmys, couldn’t have been further away from the grand opera of Jedi if it tried.

It cost $3 million – a big budget for a TV movie at that time – but despite that its visuals were a world away from how we’d seen Endor presented on the big screen adventures. Ewok lived on the ground as opposed to in the trees. Caravan of Courage saw the most obvious example thus far of earth-creatures being seen in the Star Wars galaxy. Rabbits and ponies joined lizards and snakes from Empire in an age well before crystal foxes, porg-puffins and Loth-wolves brought the GFFA closer to earth than ever.

And it featured the directorial return of George Lucas, as Eric Walker told me back in 2014 for the 2015 Star Wars Insider Special Edition.

“George Lucas came on board [to direct] one week of pick-up shots. I actually have the first day reshoot call sheet that lists him as the director, for which I understand a production assistant got into trouble, as it was taken off the second day’s call sheet. So the actual comeback into directing by George Lucas was not on Episode I but on Caravan of Courage.”

It’s easy to look back with derision and scorn – there’s no doubt that if Caravan was made today then its visuals would be infinitely better, the stakes higher, the opportunities to tie it into the greater story wider – but for me, Caravan occupies a special moment in the history of the Star Wars story, so for that reason I’ll always have a soft spot for it.

Caravan of Courage is an enjoyable film for children but unfortunately a little slow and unpolished for adults. It has the essential elements for a Ewok film but fails in certain areas. It looks rather messy compared to other Lucas productions and the narrator is distracting and makes it sound more like a documentary than a film.

On the other hand it sets itself apart from the other Star Wars films feeling more like a fantasy film rather than a science fiction film. Having some fairly good special effects and interesting creatures for what was a made for TV movie at the time.

Unfortunately adults are more likely to see its bad points rather than enjoy it for the fun parts.