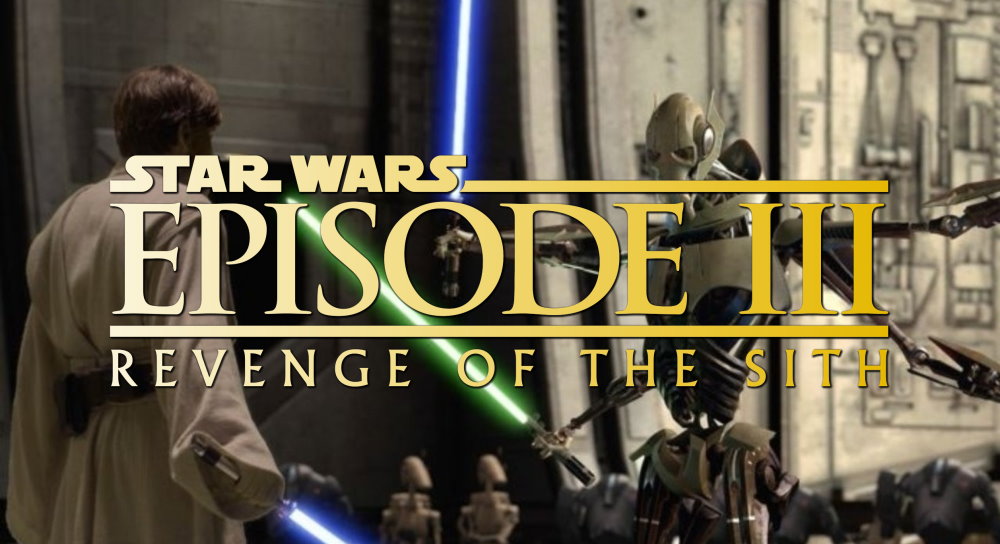 This year is also the 15th anniversary of Revenge Of The Sith, and like with previous anniversaries, Fantha Tracks will be covering this movie with a couple of articles. From behind the scenes to source and merchandise, we go in-depth to hopefully show you the movie in ways you have never seen it before.

Episode III, Revenge Of The Sith is by necessity a movie that was all about closure and ending all the running storylines. However despite of that new characters were still introduced. In this month’s article, and the one next month, we will be looking at these newly introduced characters. Starting with the new villain of the story.

An undated story notes page reveals that Lucas had pretty much planned the opening of the movie pretty much the same as we saw it in the end. Dooku was to die at the beginning by Anakin after being urged on by Palpatine, and there was a new enemy: a General Grievous. Obi-Wan was to fight him and win, but the evil General Grievous was to escape.

At the November 8, 2002 art department meeting, something which Lucas held every Friday during the first years of a production, General Grievous was mentioned for the first time to the concept artists as the new villain for the movie which they had to design. Grievous had to be scary and ageless, as old people are scary to Lucas. Lucas did not mind if the villain was male or female or a droid or some kind of alien. The General was going to have English speaking dialogue, but other than that Lucas left it up to imagination for the concept artists. All that he wanted was the next iconic villain after Darth Maul, Jango Fett and Darth Vader.

For the first few weeks and designs, he was not happy however and even mentions that while the General could be part droid, he has to be distinct from Darth Vader. This offhand comment was the first time that production learned that Vader was even going to be in the movie.

It was Warren Fu who ultimately cracked the design for the droid general, which you can see in the image attached to this article. His first sketch was a quick one made on the morning of the November 22 meeting, but it was the one that caught Lucas’s eyes the moment he walked into the room and saw it. When Fu mentioned that the eyes could be organic the hybrid droid and alien cyborg came together in the brain of Lucas. As Lucas remarked at the end of that meeting “The stuff was great guys. I just have to figure out the movie to go with It.”, Lucas is famously slow in writing scripts and by this point had not yet written much. He struggled to connect the dots between Episode III and A New Hope and still manage to close every storyline satisfyingly.

A December 6 sketch shows Grievous flanked for the first time by two droid bodyguards. In the months to follow it was Robert Barnes who further developed the General, adding the only biological parts of Grievous as: eyes, brain, spinal cord and “perhaps a plastic sac for all his organs.”

During the December 13, 2002 art department meeting Lucas mentions for the first time that Grievous was to die after a big fight with Obi-Wan on Utapau – which is a weird alternate spelling on the name Utapau that existed since the 70ies as it was the original name for Tatooine. Lucas was also considering to add a dragon-droid chase, using the concepts of a dragon lizard that Anakin was suppose to ride in the movie. The need for a vehicle for Grievous leads into a new assignment for the design team. The Boga and Grievous chase scene was eventually storyboarded as an animatic by none other than Steven Spielberg. His version ended up as an extra deleted scene for the movie on most home releases. 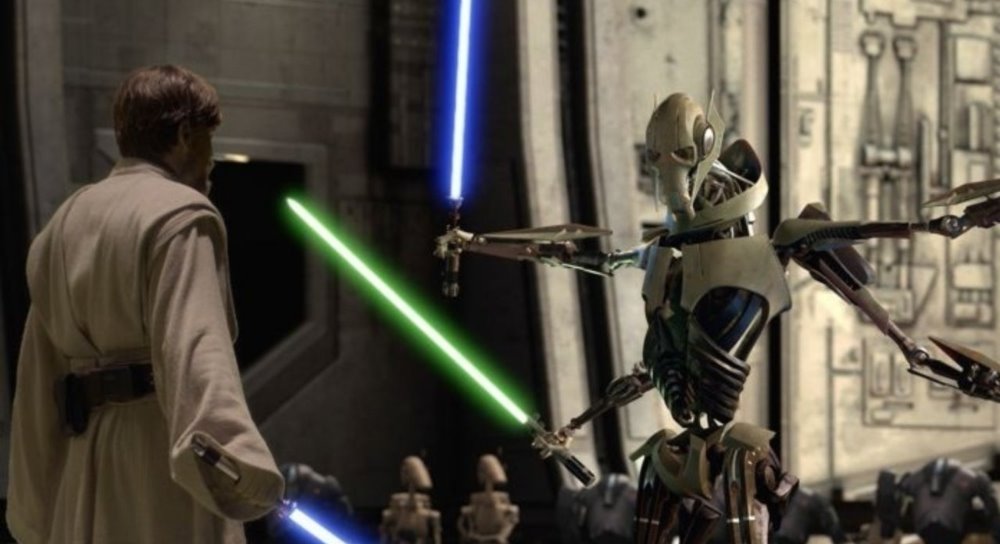 The main difference for General Grievous in the Rough Draft (January 31, 2003) versus what we would end up seeing in the movie was that Obi-Wan gets captured at the elevator, but Anakin escaped. Obi-Wan then fights Grievous alone while Anakin kills Dooku. Most of story is thus pretty much nailed down for the General, with only details to be filled in with the later script drafts.

One such add is the how Grievous escapes from his fight with Obi-Wan: he could breathe in space (a suggestion made by Ryan Church). The First Draft (April 13, 2003) implements that change, as well as Grievous killing Shaak Ti in front of Obi-Wan before their duel as the Separatist ship falls into orbit. Other additions from the First Draft are: Grievous reveals on Utapau that he can fight with lightsabers and has four arms. His death by Obi-Wan using a blaster to shoot at the organ sac is also added. Lucas wanted in the end an alien who was mostly a droid to echo what Anakin was to become as more machine then man. And while it was clear from the start that these designs meant that the General had to be a digital creation, certain live-action elements were needed. Most of these are obviously for the fight sequences with Obi-Wan and for those it was up to stunt man and fight coordinator Kyle Rowling to don a green or a blue suit and fight with Ewan McGregor. By that time Rowling was no stranger to lightsaber fighting as he was already the stunt double for Christopher Lee and Samuel L Jackson in Attack Of The Clones (which he was again for Revenge Of The Sith), and he also played the Jedi Joclad Danva during the Geonosis Arena fight. 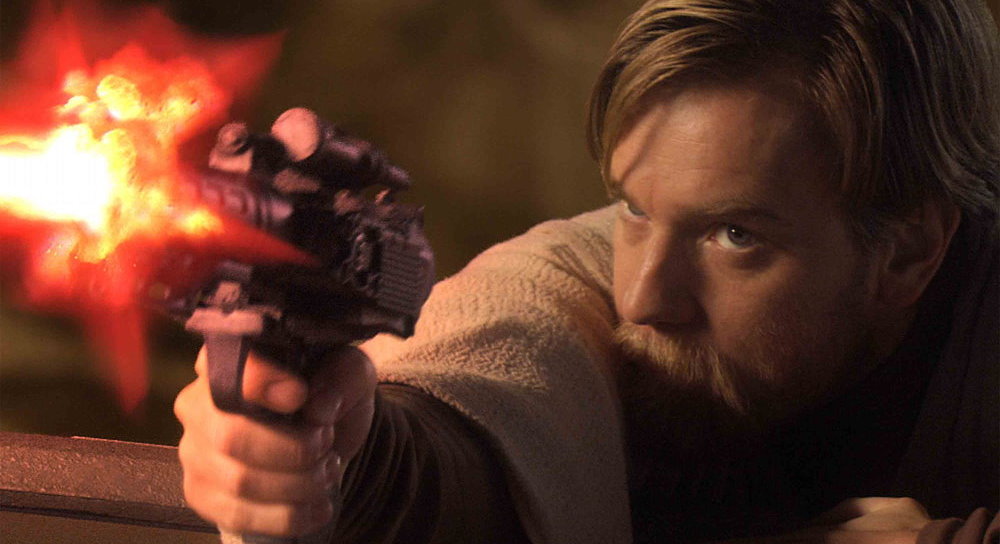 The voice actor that we all know and associate with the role is Matthew Wood and we all heard the tale how he anonymously send in an audition tape and did not expected to become the voice. And we know that George Lucas, on a day that he felt particularly sick, coughed in the microphone which was also used for Grievous. But what perhaps is lesser known is that producer Rick McCallum had originally suggested, and even approached Gary Oldman for the role! Unfortunately, or not as we still love what Wood did with the voice, the veteran actor declined.

Join us next time for another article to celebrate Revenge Of The Sith’s 15th Anniversary!

Star Wars: Squadrons - PlayStation 4
$19.99
Buy on Amazon This is a paid link. Learn More. Clicking the link may take you to the Amazon store servicing your country Price incl. tax, excl. shipping.  Details correct as at: 2021-05-09

Revenge of the Sith 15th Anniversary: Revenge Of The Sith, the forgotten anniversary

Breaking Down the Duels – Revenge of the Sith

Star Wars: Revenge of the Sith in Under Five Minutes

Galaxy’s Edge: Controversy over a specific word at Disneyland (UPDATED)