NO! No, not Bombad Racer, you mangy kashyyykian moof milkers (paraphrasing MC Chris)! I’m talking about the Original, OG Star Wars racing game, Episode One Racer! Sorry I came across so aggressive, it’s just that this is a game I’m passionate about…. 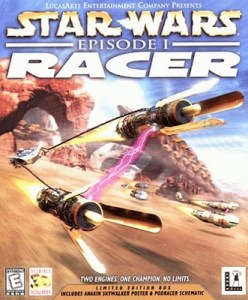 Star Wars Episode 1 Racer first came out in May of 1999 for the PC (the same month as the movie), so I probably got my copy a year or two after that came out, at a Big Warehouse store, on sale. I actually read about the game in PC Gamer at my buddy’s place before I even saw a PC version of it. I loved this game, I would play it all the time. Then, came the time for a new computer, at least twice. By this time, Microsoft Windows had moved on from Windows 95/98. When I wanted to play the game, I was unable to! My high-tech computer was too much power for my Racer CD to handle. It was put into a drawer and kinda forgotten about.

Then GOG.com announced that you could download the game for only $9.99. A trip down memory lane. I just made an eBay sale and had more than enough in my PayPal account, so I figured, why not? I bought it on May 22, 2018, it downloaded the game directly to my computer and IT WORKS! So now I have a version of the game on my computer again, but I have yet to get rid of the original CD I bought some 20 years before and is utterly useless on modern computers.

Ahem…back to the game. There’s an OPENING CRAWL, just like in a real Star Wars movie!

EPISODE I RACER
For generations, the GALACTIC PODRACING
CIRCUIT has thrilled citizens of the Outer
Rim Territories with its fast and dangerous
contests of repulsor and turbine-driven
land vehicles.

Amid the ruffian and racing elite, one
champion stands above the rest. His name
is Sebulba, a cunning and ruthless pilot
who wins by any means necessary.

To challenge him, all the best Podrace
pilots gather on the desert planet Tatooine
for the legendary BOONTA CLASSIC
determined to claim the title of fastest
podracer in the Galaxy…

You can play in a tournament, where you can go to different planets in the pod racing circuit, a single player game, or multiplayer (which I have yet to try). I usually stay in Tournament mode, it takes you to every planet – 8 in all. If you don’t win or come in the top 3, you’re stuck on that planet and that track until you win. You start in Amateur, go through Semipro, then into the Galactic Circuit and the Invitational Circuit. Your opponents get better, faster and meaner. You can always tell what place you’re in and where your fellow racers are on the track. 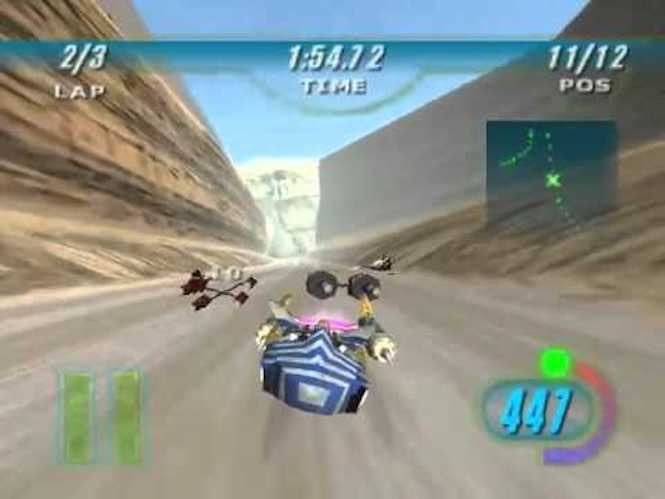 When I pick my racer, I usually stick with Anakin—he has the best stats and I like the look of his pod racer. I keep my pod stock and virtually change nothing. You can upgrade certain parts on your pod racer if you win enough credits racing the circuits. I’m still trying to figure that part out, that section isn’t the most user friendly portion of the game. Your usual problems is trying not to have your engines overheat by pressing the “boost” button all the time, and not to crash into a wall due to the incredible speed of your pod. One good thing about crashing and dying is that the game does it real fast, so if you’re in the lead, you can usually keep it until 2nd place comes to get you. You can also “slide” through turns, which takes a while to get used to, similar to drifting in a real car (or a video game). As you get better, there are track shortcuts you can take to get a better time. One of best things about Racer is that Watto (the actual actor!) sings the Cantina Song while you’re examining the results of your last race.

But to me, it always sounds like this version of Watto. 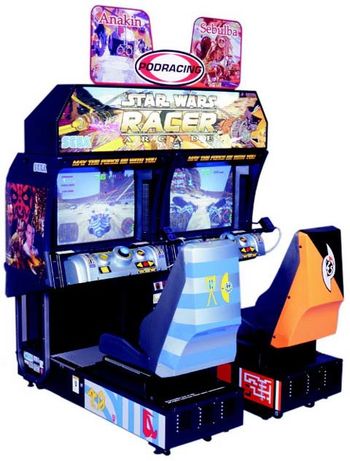 I really like the ice planet but, how can your pod skid across ice when it’s floating above the ground? Each cut scene for a new planet and track has some information about the planet and who’s sponsoring the racer – which I love for some reason. Oh, and apparently Jake Lloyd does his own Anakin voice on this game, so it actually is him screaming right before I crash. Star Wars Episode 1 Racer obviously came out before the casting of Hayden Christensen as an older Anakin and some years before young Jake grew up and became a pod racer of a different kind. Thank goodness there’s no Jar Jar Binks component in this game, but you do get to marvel at the hi-jinks of the pit droids (of which you can win enough credits to purchase one). One thing I’ll never forget is Greg Proops as Fode (one of the two-headed announcer that speaks Basic) telling me “It’s a new lap record!” It seems I got better every time I play the game! 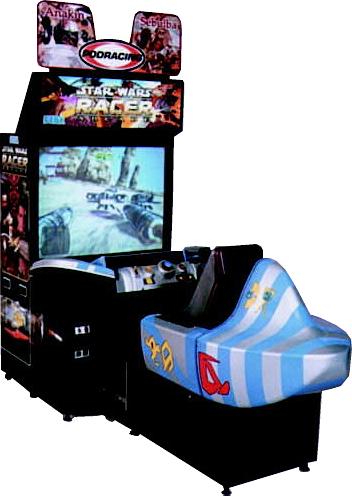 Back in the day, if you wanted to play this game outside the comforts of your home, you had to go to the arcade. And you could have played it in an actual Anakin pod racer cockpit complete with levers and shifters! I still want one for my non-existent game room.

As I said before, this game came out in 1999, the same time Episode One was in the theaters. Let’s think about this for a second—the game is almost 20 years old! The graphics are definitely better left in the past, but the gameplay is still outstanding and a lot of fun. It’s always neat to see a pixelated landscape racing by you in your pod racer. You’re sometimes too busy piloting your pod at breakneck speed to enjoy the scenery. I’m still figuring out the game, I have yet to make it to the end of the Tournament Circuit, and then, finally, I will yell, “Now this is Pod Racing!”

Episode I: Racer returns: New to Switch and PS4 12th May