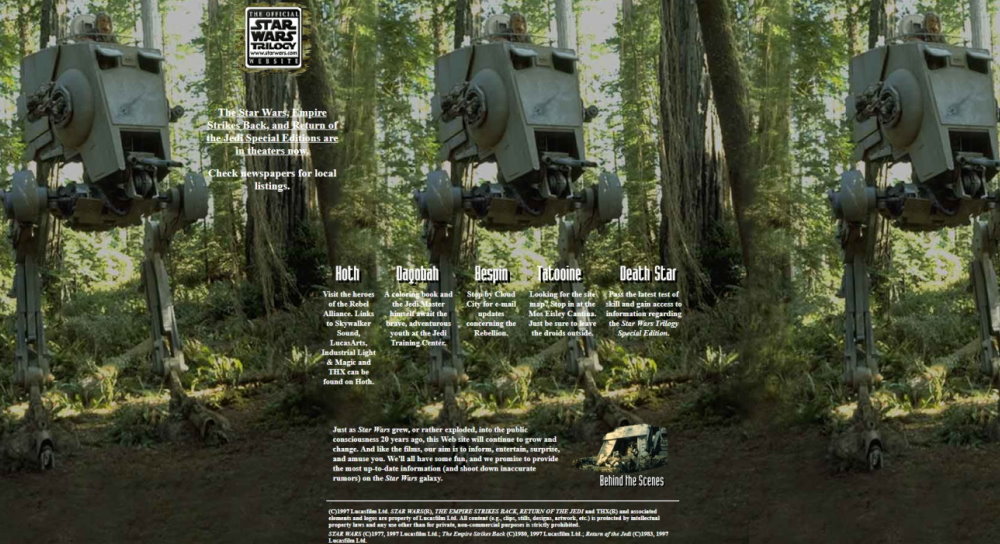 22 years ago today Sergeant Pepper had not only taught the band to play but he’d also got them dialling in to the internet, waiting 30 seconds for each page to load while tying up the telephone and paying by the minute for the privilege. Welcome to 1996, the stone age of the internet, when Instagram, Twitter, Facebook and YouTube were far beyond the technology of the time, and people spent an average of 30 minutes a MONTH browsing the net. Hotmail had just launched, the first instant messenger ICQ wouldn’t arrive until early 1997 and even Winamp and music on the web was still a year away. It was the Jurassic era of the internet, and on 26th November 1996, the official Star Wars website at starwars.com broke out of its shell and took its first steps into a larger world.

Back in those days, daily posting was not a thing. My first sci-fi website back in 1994 got updated once a week at best, a trend that continued until the early 2000’s when Lightsabre began to be updated far more regularly.

Similarly, the official site didn’t see daily updates, instead opting to bring us in-depth and detailed dives into fascinating topics that fans of the time were salivating over. With the special editions coming in fast, fans couldn’t get enough, and soon the site became the Home Page of browsers across the planet.

Here’s how the official site described their MO back in ’96.

We’re starting out modestly, just as George Lucas did 20 years ago with a relatively low-budget space fantasy called Star Wars: A New Hope. Just as Star Wars grew, or rather exploded, in the public consciousness, this web site will continue to grow and change. And like the films, our aim is to inform, entertain, surprise, and amuse you. We’ll all have some fun, and we promise to provide the most up-to-date information (and shoot down inaccurate rumors) on the Star Wars universe.

The original iteration of the official site no longer exists, but thankfully the Internet Archive Wayback Machine keeps track of such important sites. Click here for a look at the official site as it appeared (minus a few images here and there) on 30th December 1996.

To celebrate, check out this article from 2016 looking at the history and development of the official site and many happy returns StarWars.com.

StarWars.com Databank expands with The Rise of Skywalker information

Lessons From The Star Wars Saga: The Power of Faith

Lessons from the Star Wars Saga: The power of compassion

San Diego Comic Con: Where you can find Star Wars at the show