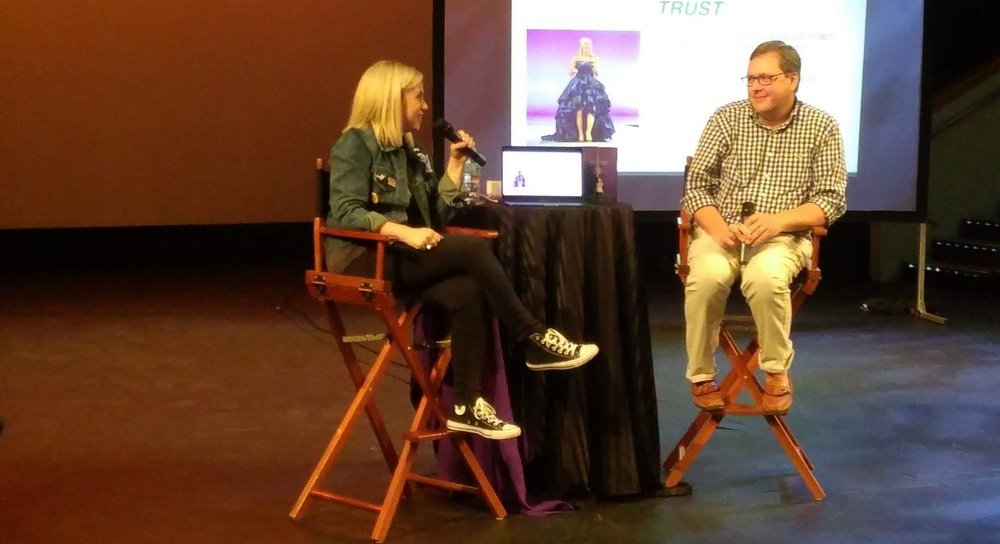 Ashley Eckstein returned home to where her career began at The Orlando Repertory Theatre and Fantha Tracks guest writer Philip Harrison Vazquez was one of the lucky few to get a ticket and hear Ashley give an inspirational talk. Read on to see what an amazing night it was and who he got to meet! 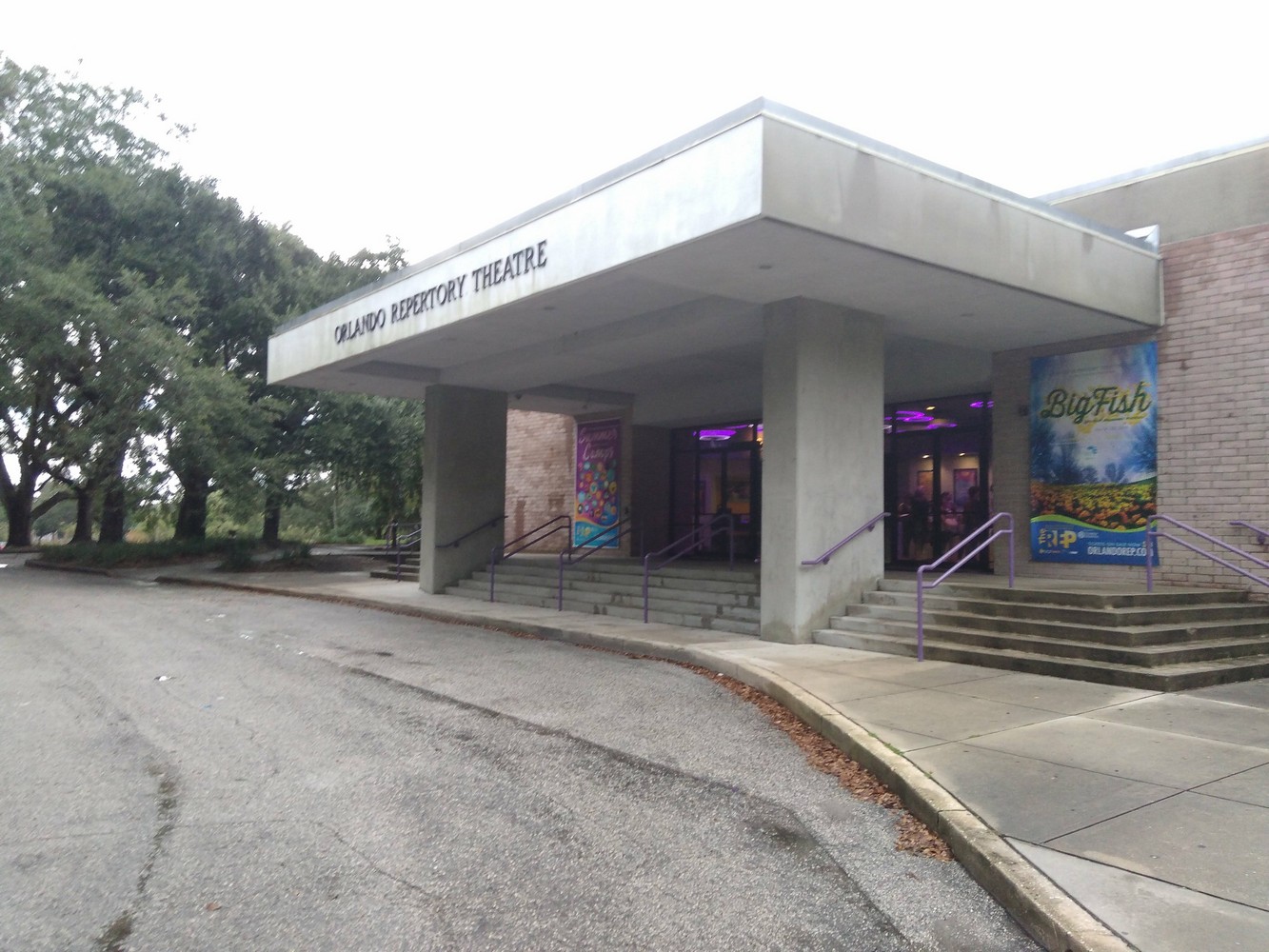 The Orlando Repertory Theatre, simply known as The Rep, is a typical community theater located in a suburb of Orlando. On any other Tuesday night, you’d be correct in assuming the cars parked outside would be for a local performance of The Wizard of Oz, The Sound of Music, or another classic play. But, on July 31, 2018, it was instead filled with Star Wars and other pop culture fans for a special event held by Ashley Eckstein to discuss her recent book, It’s Your Universe: You Have the Power to Make It Happen.

It was slated to start at 6:30PM, and I arrived around 6PM. Once inside, I was greeted with a line of about 100-150 people eagerly awaiting the start of the event. Most were dressed in Her Universe, Ahsoka, or Star Wars clothing. If this was a weekend or holiday, I suspect the crowd would have been larger, but it was a nice change of pace to have a somewhat small group of people there for this unique experience.

The doors opened at approximately 6:30PM and we were led into a rather quaint space with seats on three sides of the room, I would guess it had about 300-500 seats. The entire audience filled just one of those sections, there were no assigned seats, and I was lucky enough to sit in the 2nd row and had a clear view of where Ashley was going to be. I noticed a second seat and was curious who would be the sitting there. Her husband? Someone who works alongside her at Her Universe? Turns, it out was for Jeffrey M. Revels, Artistic Director of The Rep. He introduced himself, set up a laptop hooked up to a projector, and started a video presentation. Sadly, the audio was not coming through properly, but it added a nice levity to the evening. We all laughed at the situation and enjoyed the presentation as best we could.

He then introduced Ashley who entered from behind the curtain and the main event began. She looked around the room, greeting us all as a group, made a point to specify a lot of her family, including her mother, father, sister, nieces, and nephew who were also in attendance. They were seated in the 1st row, just a few seats from my right. Them being there made this feel much more informal, almost like a friends and family get together. Ashley also got excited to see that Cynthia Kirkland was also here. Cynthia recently won Judge’s Choice for her “The Couture of Water” dress at the Her Universe 2018 Fashion show held at San Diego Comic Con, which can be seen at  here .

I was sitting directly behind Cynthia and I noticed she had a sketch pad. I was curious to see if she was perhaps going to be sketching some designs if she was struck by inspiration during the event.

I can’t go into too much detail about what was talked about because Ashley touched on many points, but I’ll do my best and highlight what I can. Ashley focused on her upbringing, getting bit by the acting bug at a very early age, and her parents always encouraging her to pursue her dreams, no matter how “impossible” they might seem. She mentioned how she, at one point, wanted to become a Supreme Court Justice, which was an interesting tidbit of info. She talked about how she encourages everyone to dream, that people can insult you, hurt you, they can strip everything away from you, but they can never take away your ability to dream, only you can do that. She passed out some index cards and pencils to the audience and asked us to write down our dream(s), no matter how impossible they may seem. She told us that you should take one step toward that dream every day, no matter how small that step may be. A lot of the things she talked about are mentioned in the book, but it was great to hear it straight from Ashley herself. At one point her mother got up and talked about a conversation she had with Stacey Moore, Mandy Moore’s mother, about getting Ashley into acting and that she should move to Hollywood to get started.

Ashley shared that she got a lot of rejections over the years, but she pushed through them and eventually landed the role of Ahsoka Tano on Star Wars: The Clone Wars. She also discussed how she always wanted to start a fashion line for girls and women centered around Pop Culture because all of the clothing at the time was geared toward men and boys, despite the fact that females made up almost 50% of the Sci-Fi and pop culture fans. She made it clear that this was Our Universe, and she wanted women to feel more welcome, a sentiment I completely share and, thankfully, is still making traction. Like I mentioned, there was a lot she talked about, but much of it was focused on following your dreams and not letting other people or negative situations deter you from those dreams.

Eventually, it was time for a few audience questions and one person asked how Jodie Whittaker’s appearance at the fashion show came to be.

For those who don’t know, Jodie is the 13th Doctor Who, and the very first female Doctor Who. Before she answered, she explained that the man who asked the question was Preston Mack, the photographer who took photos of Ashley cosplaying as Ahsoka Tano, and that one of the photo is in her book. He semi-jokingly offered to sign anyone’s book if they wanted. To answer his question, Ashley explained that it was planned for Jodie to make an appearance at the fashion show and they decided that Jodie would go out on the catwalk in Her Universe’s Doctor Who outfit at the end of the show under the premise that she was a model that had been inadvertently overlooked, only to lower the hood and have a dramatic reveal.

Someone else asked how to get into voice acting because it is such a difficult industry to get into. Ashley shared that the first step is to get in touch with your local Screen Actors Guild and try to find an agent who can help you submit auditions. Now-a-days you just need to use your smart phone and email your auditions, unlike when she started you had to physically be there and audition in person; it’s much easier now. She also shared that you should call agencies once a week until you get a meeting, because as she said, the squeaky wheel gets the grease. She also said to not call more than once a week so as not to become a nuisance.

She then demonstrated what it is like to record a scene as Ahsoka while being directed by Dave Filoni. For example, Dave once told her that, in this scene, Ahsoka is picked up by a giant bird-like creature, flown over a ravine, dropped, hits the ground, rolls three times,and hits a wall. The result was her standing still in order to ensure that the microphone picks up all the audio, making noises and grunts to go with those actions. It was a real treat to see and hear Ashley in action as Ahsoka Tano and  to get some insight into what it’s like to work with Dave on an episode of Clone Wars! Of course, she talked about the revival of Clone Wars, which was just announced at SDCC, and all of us cheered. As I write this now, I get goosebumps with how excited I am by this news!!! Ashley said she only knows of the 12 episodes that will be premiering on Disney’s new streaming service.

Afterwards, it was time for the meet and greet with Ashley in the lobby. We all lined up and waited our turns. During this time, I went looking for Cynthia, and asked it would be okay if I took her photo for this article. We chatted a bit about what it was like being part of the fashion show and to work with Her Universe/Ashley at the event. After a few minutes, I thanked her and she gave me her contact info. She does some amazing cosplay and fashion work, so check out her instagram.

When I returned to my place in line, I noticed that Preston was right next to me. I asked him if I could take his photo as well and if he would sign the Ahsoka photo page in my book, He was surprised that someone actually wanted his autograph and photo and I half-jokingly said, “Hey, you offered!” His son took a photo of him signing my book and said something along the lines of, “You finally made it to the big time dad!”. You can check out his work here . After waiting about another 45 minutes or so, I got to meet Ashley and chat with her about how I am going to be writing this article and that it was great to meet her again!

Overall, it was a great event, I got to meet a ton of great people, some that were completely unexpected. The presentation Ashley gave was very inspirational and informative and I encourage everyone to get her book. This isn’t just for women, it’s for everyone who wants to make strides in achieving their goals and dreams!

Film and TV Review: The Clone Wars Season 7: Gone With A Trace

The Apprentice Lives: Ahsoka Tano is featured in Starburst Magazine #471

Images From Star Wars: The Clone Wars “Gone With A Trace” Released