It’s the essential magazine for LEGO collectors and builders, and as the 72nd issue of Blocks Magazine arrives in UK shops on 1st October all eyes turn to their special feature focusing on The Mandalorian.

Blocks magazine offers a bounty of exclusive LEGO builds this month, with a special feature focusing on Star Wars: The Mandalorian.

Star Wars is returning to Disney+ with The Mandalorian Season 2, so Blocks magazine Issue 72 celebrates the show with a special build series. The magazine is available now at www.blocksmag.com and arrives in UK shops on October 1. 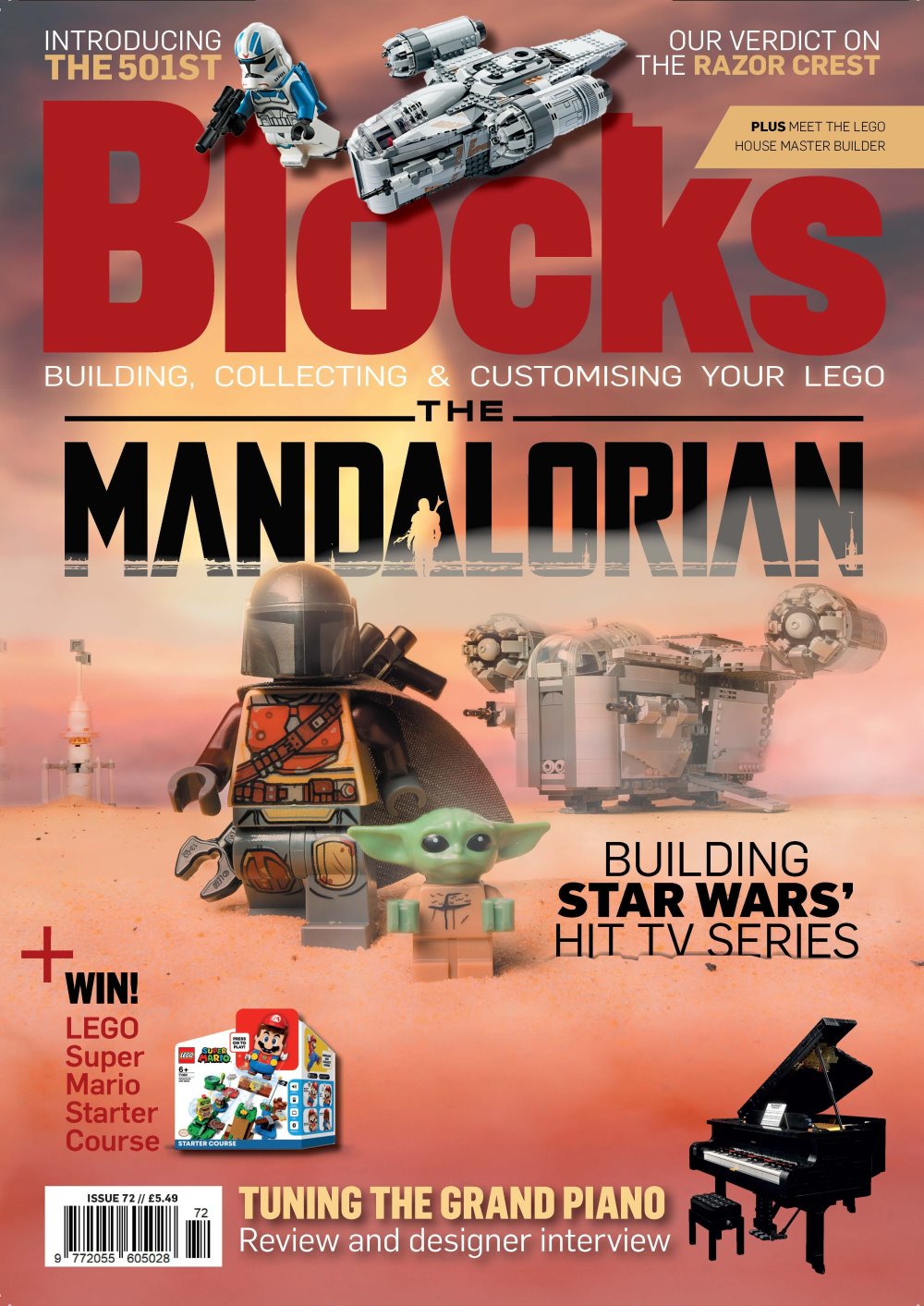 Using the new Razor Crest set as a starting point, a series of beautiful photographs recreate key moments from the show using LEGO bricks. There are also instructions showing how to build a bassinet in scale with the mini LEGO Baby Yoda – ahem, the Child – and a Blurrg that a minifigure can ride.

To mark the release of the 501st Legion Clone Troopers set, Editor Chris Wharfe catches up with the real-life 501st leaders to find out all about the bad guys who do good, and how they went from a fan organisation to appearing on-screen in the Star Wars universe.

Anyone who has visited LEGO House, or watched any of the recent live-streamed tours, will likely be familiar with the destination’s Master Builder, Stuart Harris. Not only did he work with Kjeld Kirk Kristiansen to develop the Home of the Brick, but his LEGO career started as part of the original LEGOLAND Windsor team, and he has been developing attractions and events ever since. He even reveals his personal audio contribution to the Fairy Tale Brook ride…

Blockstalgia takes a look at Town, focusing in on Divers – the first time that real-world underwater exploration was covered by the theme. As well as reviewing specific sets from the 1990s classic, the section includes exclusive building instructions for a whale skeleton as part of a modernised seafloor.

To really show off the Grand Piano, Blocks visits London’s Wigmore Hall to photograph the set and interviews the LEGO Ideas team who took the fan design and turned it into an enormous and functional official set.

History buffs will find plenty to build in this month’s Technique guide, which shows how to build a variety of battering rams – some for minifigures to use themselves and some as part of larger contraptions. Whichever version builders opt for, these knights will be well-equipped to smash into an enemy fortress.

That is just a taste of what fans will find in the magazine’s 116 pages, with this issue also including the top ten LEGO shop sets, a review of Wonder Woman vs Cheetah, instructions to build a Tusken Raider’s Bantha, a look at LEGO Star Wars: The Skywalker Saga and so much more.

Want to win 71360 Adventures with Mario Starter Course? To be entered into the new prize draw and to get Blocks magazine delivered every month – ahead of the shops – visit www.blocksmag.com and check out the money-saving subscription deals available.

Everyone who subscribes to the print edition by November 1 will be in with a chance of winning (existing subscribers will automatically be entered into the prize draw).

Lego Star Wars Skywalker Saga - PlayStation 4 Standard Edition
$59.99
Buy on Amazon This is a paid link. Learn More. Clicking the link may take you to the Amazon store servicing your country Price incl. tax, excl. shipping.  Details correct as at: 2021-07-28