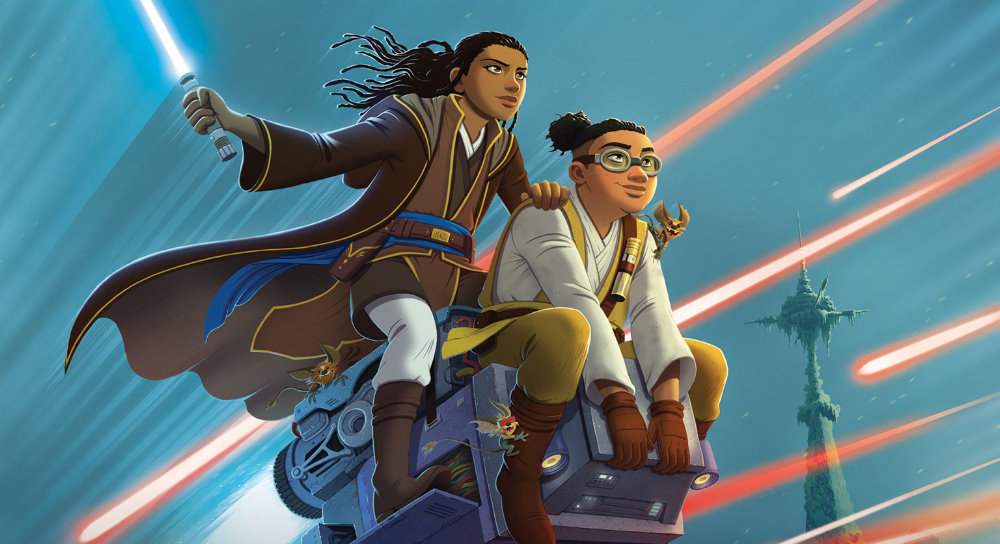 Jedi Master Kantam Sy paced back and forth on the deck of the Star Hopper as PZ1-3 navigated them closer and closer to Trymant IV. Sy was tall and slender, with sharp cheek-bones and an impressive topknot. They seemed older than their actual age, in part because they often walked startlingly slow as a form of meditation. But Lula had seen Master Sy in action, and that gentle easygoing demeanor was nowhere to be seen when lives were on the line.

Lula and Zeen slid into the seats at their stations. It was strange to be the only two young people on the Hopper. The bridge was normally alive with chattering and laughter, Farzala cracking jokes and Qort explaining something complicated while the others gossiped or traded tips. But everyone else was off ﬁghting an army of carnivorous plant creatures called the Drengir, and only Zeen and Lula were left.

Stars shimmered in the darkness outside the transparent dome covering the whole top level of the Hopper. Lula and her friends would sometimes take their sleeping bags up and lie on their backs late at night, watching the galaxy spin past.

“Listen up, listen up,” Master Sy said, already in action mode. “We’ll be landing in a moment. The last time we were here, things were very different, of course. We had some confrontations–”

“And made a new friend!” Sy said, ﬂashing a winning smile at Zeen. “Now we’re here for a very speciﬁc reason, and that’s to follow up on a lead from Jedi Vernestra Rwoh. I’ll let her ﬁll you in.”

The small blue image of a girl not much older than Lula ﬂickered up from the holo. This was Vernestra Rwoh? She had a slender, kind face and long straight hair. She wore the traditional temple robes, both simple and ornate, and stood with her back very straight. But how could she be so young? A prickly ﬂash of emotion rose within Lula, and she tried to push it away. Envy. A very un-Jedi-like feeling indeed. She crinkled her nose with the strain of getting her emotions under control.

Ever since she could remember, Lula Talisola had been determined to be the greatest Jedi of all time. She knew this ambition wasn’t very Jedi-like, either, but she ﬁgured she had time to get that part under control amid all her other training. And anyway, if she trained hard enough and excelled at every possible skill, she wouldn’t have to worry about becoming the best; she just would be the best!

So she studied and trained and meditated, at least twice as much as all the other Padawans she knew. And she stayed at the top of her clan. She ﬁgured she was on track, for the most part. Meeting Zeen, seeing what she could do with the Force, even without training–that had thrown Lula at ﬁrst, sure. But Zeen had quickly become one of her best friends, and Lula found she couldn’t be bothered to wonder how amazing a Jedi Zeen would’ve been if she had been raised in the Jedi Order instead of suppressing her Force sensitivity–not when they were having so much fun together.

But Vernestra had already become a full Knight and she was so young! Who was this girl? A sharp nudge from Zeen ripped Lula from her spiral of overthinking.

“Thinking too hard about something and not paying attention to what’s going on around you!”

Lula was extra annoyed because her friend was right. “How do you know?”

“And so,” Vernestra was explaining, “I looked deeper into the ﬁles from the Trymant IV disaster and discovered the story of your cohort and Zeen Mrala.” She nodded at Zeen, who acknowledged her with a shy wave. “The Nihil raiders you came into contact with might have something to do with the ones I faced on Wevo. From what I understand, their attack on Trymant IV didn’t follow their usual raid patterns.”

An awkward moment passed; the young Jedi looked directly at Zeen. She was waiting for Zeen to say something, Lula realized. But Zeen’s head tendrils pointed directly down, tensed, and her brow was furrowed. The whole mess with Krix and everything that had happened since was too much to get into, especially with a strange Jedi on a ﬂickering hologram.

“Is it, ah, true,” Vernestra said, her voice suddenly gentle and uncertain, “that one of your closest friends ran off with the masked raiders?”

Zeen nodded once, her whole face a frown.

“Yes.” Vernestra looked solemn. “We think he may have had some ancient information that the Nihil were after. . . . Master Yoda went to investigate–we think–”

“Still no word from him?” Lula asked, trying not to sound too worried. Lula thought Master Yoda was the greatest Jedi the galaxy had known, and he’d been with her and the other Padawans for most of their adventures on the Star Hopper. Nothing had felt the same without him around, but she always ﬁgured he’d come back.

“Nothing,” Vernestra said. “But in the meantime we must keep investigating.” She turned to Master Sy and nodded respectfully. “We were hoping you and your Padawans could investigate for us, Master Sy. And with Zeen’s help, maybe you could get some answers from the elders who weren’t taken by the Nihil.”

“I’m sure you already know,” Vernestra said, “that these raiders are ruthless, unpredictable, and extremely dangerous. We don’t think any are still in the Trymant system, but that doesn’t mean they won’t come back.”

“We do know,” Master Sy said, with perhaps an edge of pride in their voice. “My Padawans have already faced them down several times.”

Vernestra nodded at Sy, then turned to Lula and Zeen. “May the Force be with you all.” And she was gone.

“Oh, dear,” PZ1-3 said, and everyone looked over to him. The droid swiveled in his seat and ﬁxed his glowing eyes on Zeen. “We heard reports that the disaster had caused severe damage to the ecology of the planet, but we had no idea of the extent of that disruption.”

“What?” Zeen cried, running to the front viewport. She gasped, one hand on PZ1-3’s shoulder.

Lula was right behind her. Trymant IV had been a lush forest planet, its cities perched amid towering trees and gigantic lakes; whole networks of rivers had stretched across the surface, shimmering blue veins that you could see from kilometers above.

Now it looked like nothing more than a dusty red desert.

Star Wars The High Republic: Race to Crashpoint Tower
$11.99
Buy on Amazon This is a paid link. Learn More. Clicking the link may take you to the Amazon store servicing your country Price incl. tax, excl. shipping.  Details correct as at: 2021-06-19