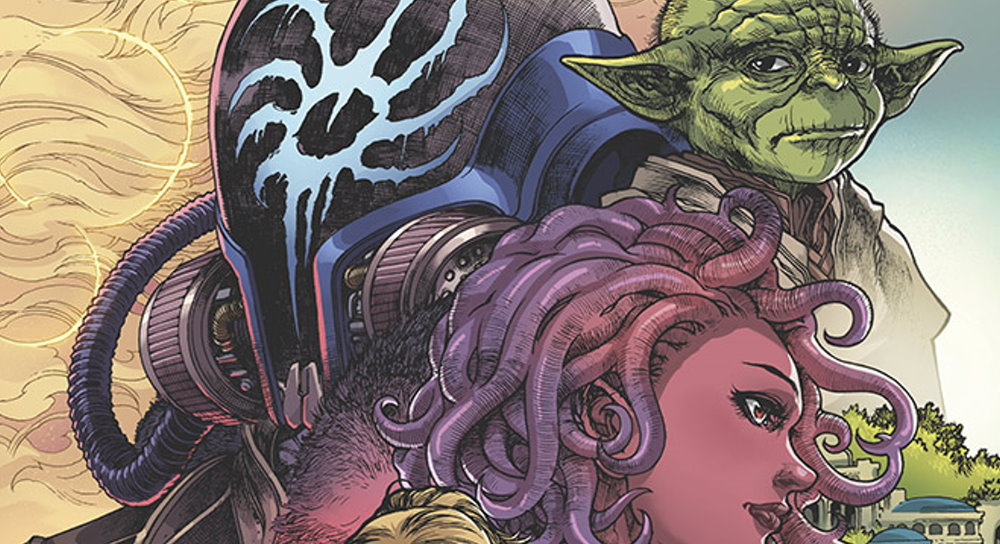 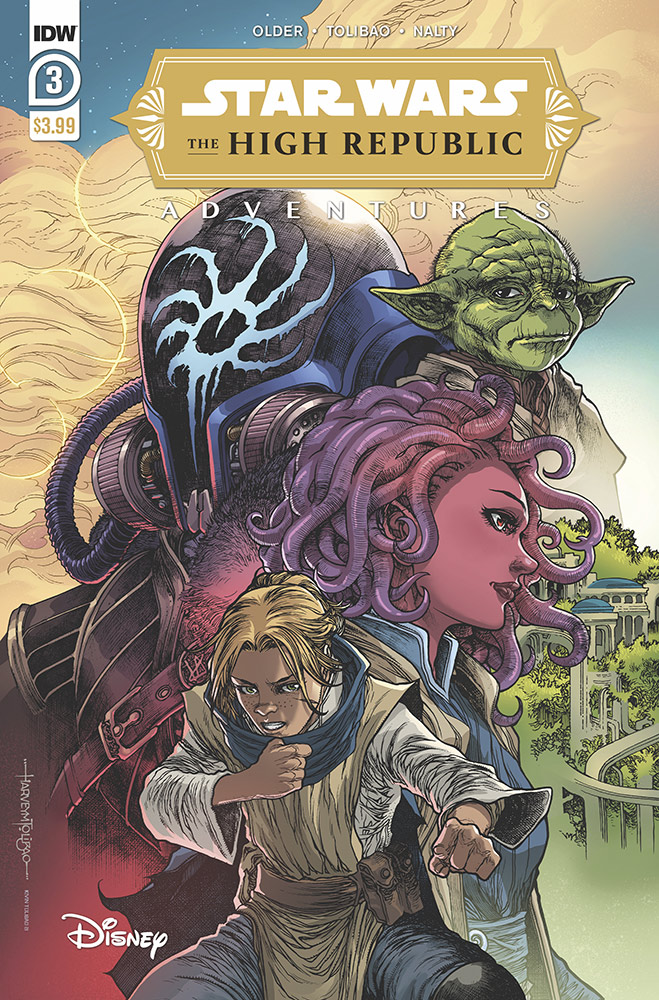 A SHOCKING REVELATION in BRALANAK CITY.

Force-sensitive Mikkian ZEEN MRALA has helped the the PADAWANS of the ”STAR HOPPER” protect the citizens of Trymant IV as thy evacuate following the hyperspace disaster.

But she is separated from her best friend KRIX KAMERAT, who, shocked by Zeen’s new powers, has chosen to leave the planet in the company of the NIHIL….

There have been plenty of comic runs that have come hot out of the gate, then cooled quickly into mediocrity, but thankfully Star Wars: The High Republic Adventures isn’t one of them. Squarely aimed at kids, there’s an energy and vigour about the title that seeps from the pages, fuelled by a pacey, energetic script from D.J. Older and enticing art from Harvey Tolibao. Skewing young it might be, but don’t let that deter more seasoned readers; this really is a satisfying start to a new series of adventures, and issue 3 continues that top tier start.

This issue we focus on the lives of Krix and Zeen. Zeen is now a week into her time aboard Starlight Beacon, training with the Jedi and learning new skills and lessons, while Krix remains in Bralanak City. Drawn to illustrate their distanced conversation, we feel the grime and grit of Krix’s situation juxtaposed with the far more lugubrious surroundings of Starlight Beacon. While Zeen meets new people and experiences new lessons, Krix has far more weighty choices to make. An ancient relic is hidden, and as Elder Tromak takes Krix into his confidence while they are being led towards their certain doom in a fighting arena known as the rink, it’s clear his situation is far more dire than Zeens.

On Starlight Beacon, Zeen is made aware that while she is too old to train as a Jedi, her fate is in her own hands, unlike Krix who not only has to steer the slimetrails of the terrible Bogaranth in the rink but quickly decide what to do when the holoreciever given to him by Yoda is discovered. We switch from Zeen to Krix, Krix to Zeen as her path is made clearer while Krix points the finger to Elder Tromak for owning the holoreciever. His deception is seen through by the Nihil, but reciever means their location is vulnerable and as the issue ends we see both youngsters given tough decisions to make; Zeen to contact Krix to find out what the Nihil know, and Krix to spring a trap for the Jedi. Both are understandably unsure.

As stated, the issue is replate with eye candy, starting with that striking cover, and while the modern phrases are still present, the Oortolan in the Rink brings such a smile that small niggle is easily forgiven. Three really solid issues so far, and here’s hoping we make that four.