Finally, the details on the missing Action Figure variant cover that fans have been demanding are out.  Bossk will be a JTC exclusive cover of issue 33 of the main Star Wars title from Marvel available from April 12th and limited to 3000 copies.   These are solely made available to fans via his website in the same manner as other exclusives have been made.  If you have purchased one before then a pre-sale will occur 24 hours in advance. 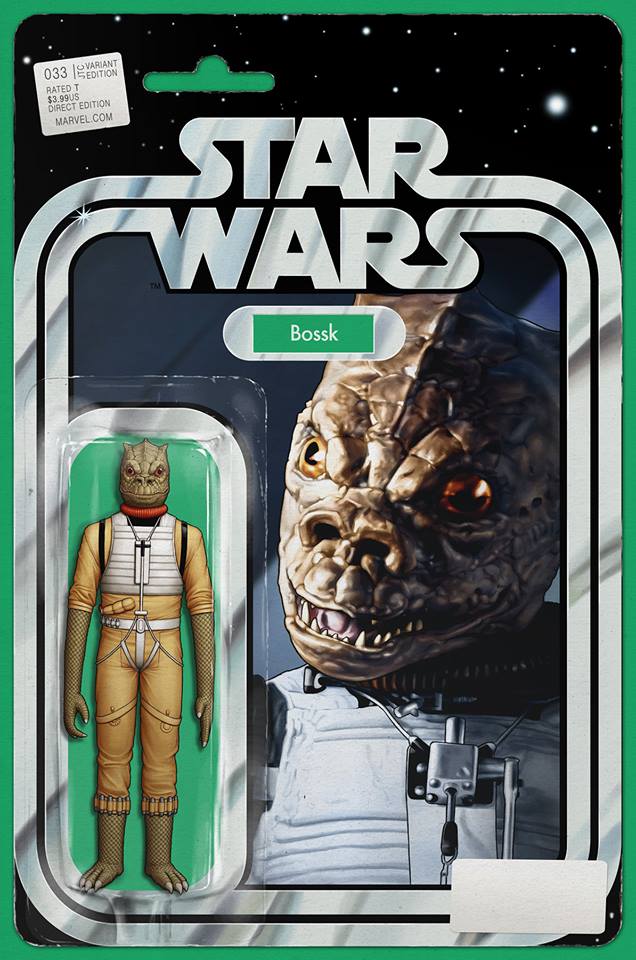 It may seem odd that a variant for issue #33 would be released so late after the initial run but John explains why.

A couple of years past, and I was given an amazing opportunity to request a character that I wanted, within reason. Without hesitation, the first name I mentioned was my main man!

All systems go… but then we got pitched a curve ball. I touched on this during the Luke release, but now I can finally give you the full skinny. The original idea was to do Bossk in Q3, K2-SO in Q4, and then Blue Snaggletooth in Q1 of this year. With the leak of K2 we decided to switch them up. Then with the leak of Blue Snag, we decided to push him back again. AND THEN with the amazing opportunity with Luke for the 40th issue for the 40th anniversary, we decided to push him back AGAIN!

It totally broke my heart to keep pushing him back. This was as close as it’s ever gotten to me considering releasing a 5th book in a year. It has been SO hard to keep my mouth shut, especially now that the Jedi figures have started to come out. Lando Griffen, and all of you who have been asking, I’m supper sorry I had to just play coy. I just didn’t want to spoil him, or rush him so close to Luke. Trust me, this is really cathartic (and my book shelves are going to be really happy) to finally be able to offer the one and the only

John goes onto explain that Bossk has a special place in his heart and has been one of the covers he was hoping to release months ago.

Bossk is one of my favorites. As a kid, he was probably my favorite of the original action figures, and right up there with the Rancor as one of my most cherished childhood toys. When I played as a kid, there was a good chance it was Bossk and the Rancor doing some awesome adventures. I would be willing to bet, that those two got played with more than any toys I’ve ever owned. If Disney & Lucasfilm ever decide they want to do a buddy comedy with Bossk and the Rancor, give me a call; there are thousands of ideas I’ve LITERALLY been playing around with since I was a kid. I love this guy, and it means the world to me to have had the honor to draw him. This was truly one of those times I could feel what it was like to be 5 years old again

As with previous exclusive there are signed copies available so make sure to keep an eye of his facebook page or website to order yours.