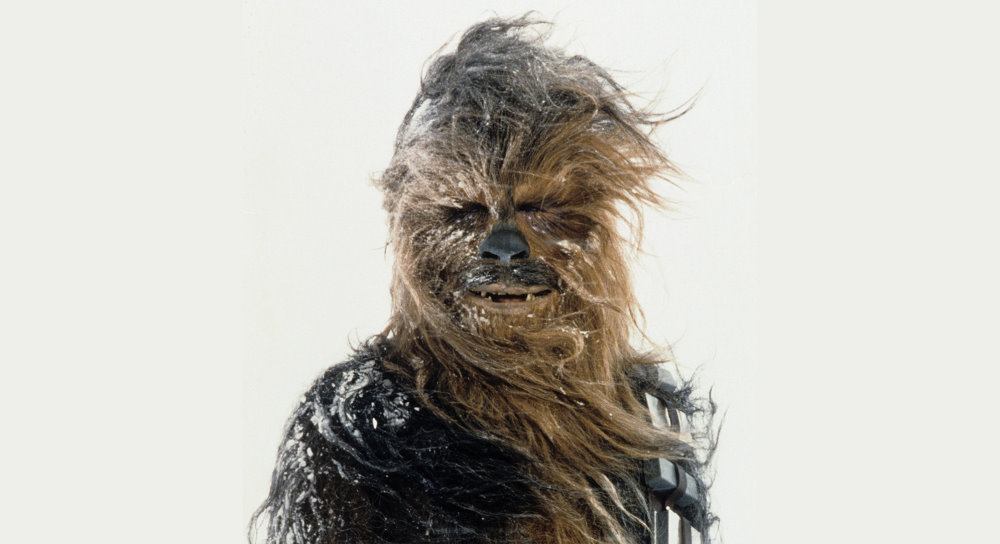 Many of the Fantha Trackers met Chewbacca actor, Peter Mayhew, over the years. Here, we share our memories of the man behind the mask and why he will never be forgotten.

I’d had a number of opportunities to meet Peter over the years, and finally did so at Celebration Europe 3 in 2016 at London’s ExCeL.

Maybe it was tiredness from the time difference between his US home and his native UK, or perhaps his ill health, but my experience with Peter was quite comical. 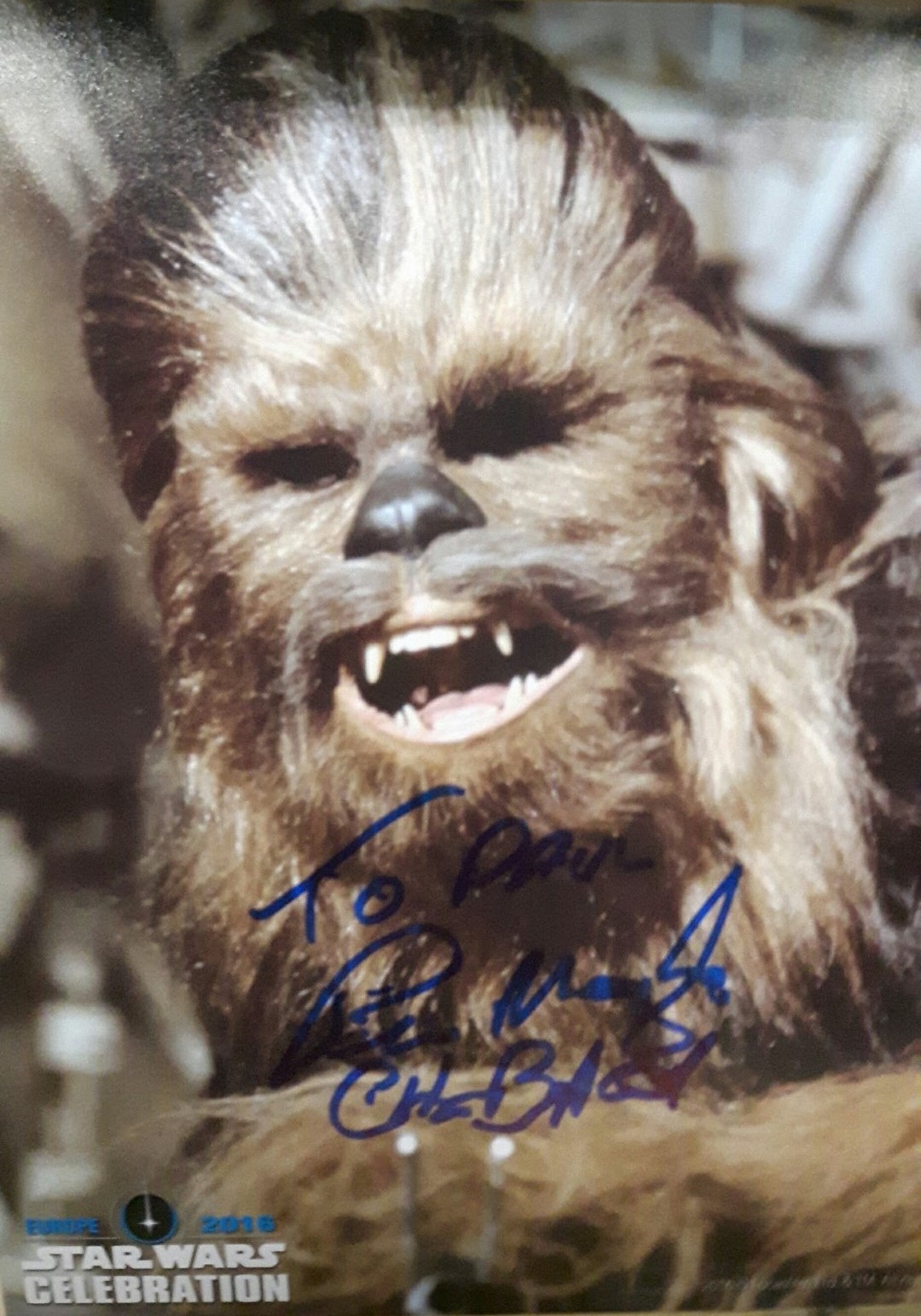 He was clearly not feeling the experience when I met him. I paid for two autographed photos – one for my son Matthew and another for myself.

He’d finished signing my son’s – and mine was almost complete – when I was about to take a picture with my phone.

“Too late,” exclaimed Peter. Well, it was more a Chewie bark actually.

I wasn’t aware that he was okay with photos being taken part way through the process, but not at the end. I’d have done so earlier had I known.

I didn’t want my arms to get pulled from their sockets so I let the Wookie win. Following a hand shake I shook the pictures dry, walking away from his table with a wry smile on my face. If anything, his grouchiness endeared the actor and character to me more.

I had met Kenny Baker just months before and the day following my meeting with Mr Mayhew I met Carrie Fisher. Three of my dearest heroes no longer with us. However, with a huge catalogue of work for us all to enjoy, no one is ever really gone.

I met Peter Mayhew very briefly at one of the very first Star Wars Weekends. He was just finishing up signing autographs when I walked by his signing area on the way to the Star Wars Trivia Contest. I did not get to speak with him, but I did get to see him up close as I walked by. After I was eliminated from the second to last round of the contest, I was given a signed photo as a consolation prize for reaching that part of the contest. It was a signed photo of Peter Mayhew, which I was told he signed just before the contest just for us! It was my first Star Wars celebrity autograph! I am so thankful that I have this to remember him by.

Being one of the tall kids in school – and a Han Solo fan – I always gravitated towards Peter and the character of Chewbacca he created. Han and Chewie were our Butch and Sundance, and while Harrison was the Hollywood superstar, Peter – as a fellow Brit – always felt like one of us. A 7 foot 3 inch tall one of us.

I met Peter a few times over the years, at Celebrations and UK events. It was always very brief, a minute here or a 30 second chat there, being seated a few chairs down at the German Garrison meal at Celebration Europe 2 in Essen, but my favourite personal memory of Peter was interviewing him for Lightsabre back in 2005. On that day I had a good 20 minutes all to myself to chat about the original trilogy, the Holiday Special and Revenge of the Sith which had just been released. It was a fun chat, with more laughs than I expected (you can read the interview here) and in the years in between there was the odd email and bits for the Insider. 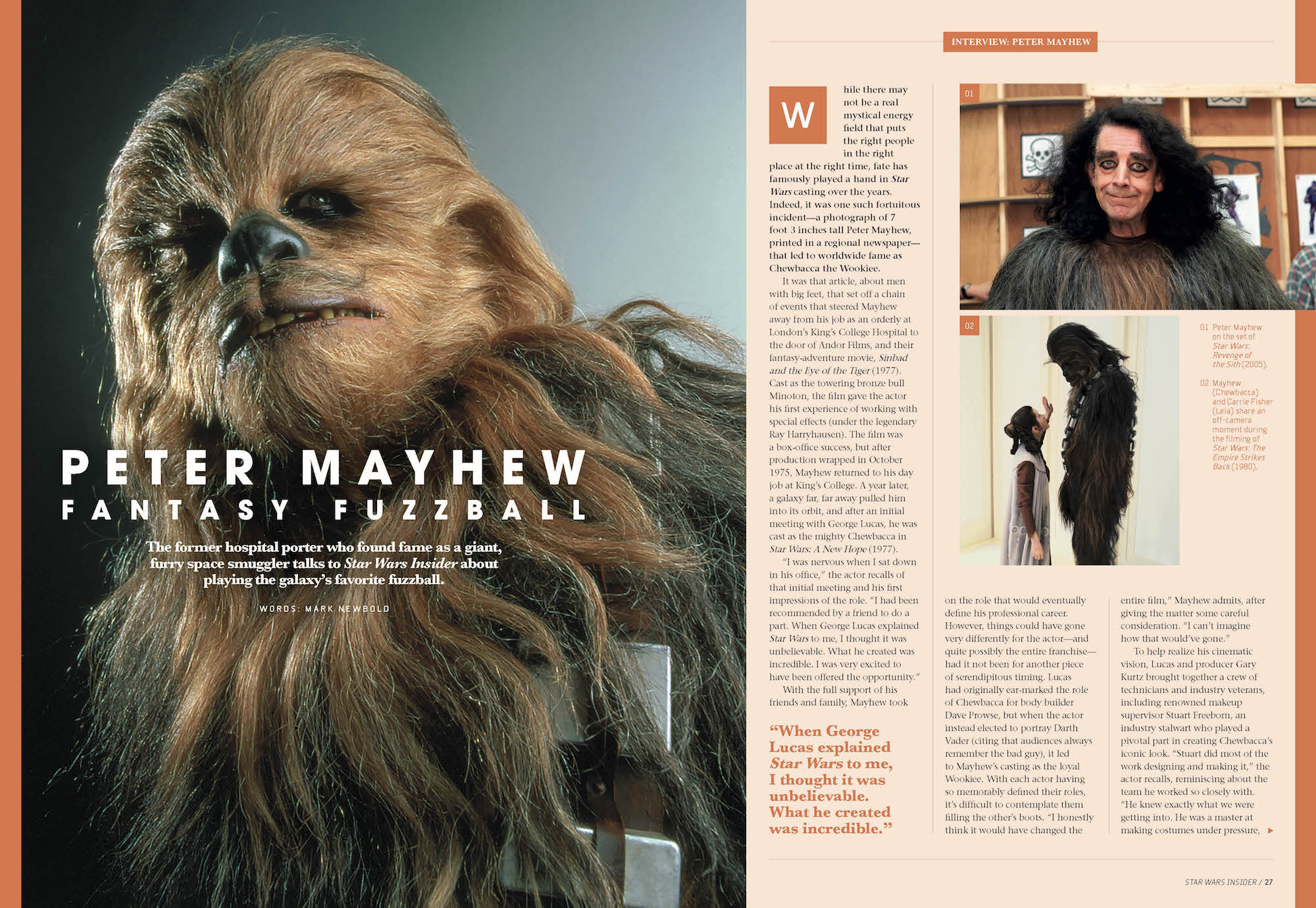 My final interaction with Peter was in the latest edition of the Insider, issue 189 where we ran through his career, from initially getting the role to what his family felt about him becoming a movie star. Of course, I had no idea it would be one of the last interviews he would do, because we never expect people who have been a part of our lives for a big percentage of it to not be there anymore. Even when we saw Peter at Celebration Chicago a few weeks ago, we had no idea it would be the last time.

Just like Carrie and Kenny, and so many other original trilogy actors before them, their absence will be keenly felt, but one thing is for sure. As long as the original trilogy, Revenge of the Sith and The Force Awakens are played on screens big and small, the wookiee will always roar. 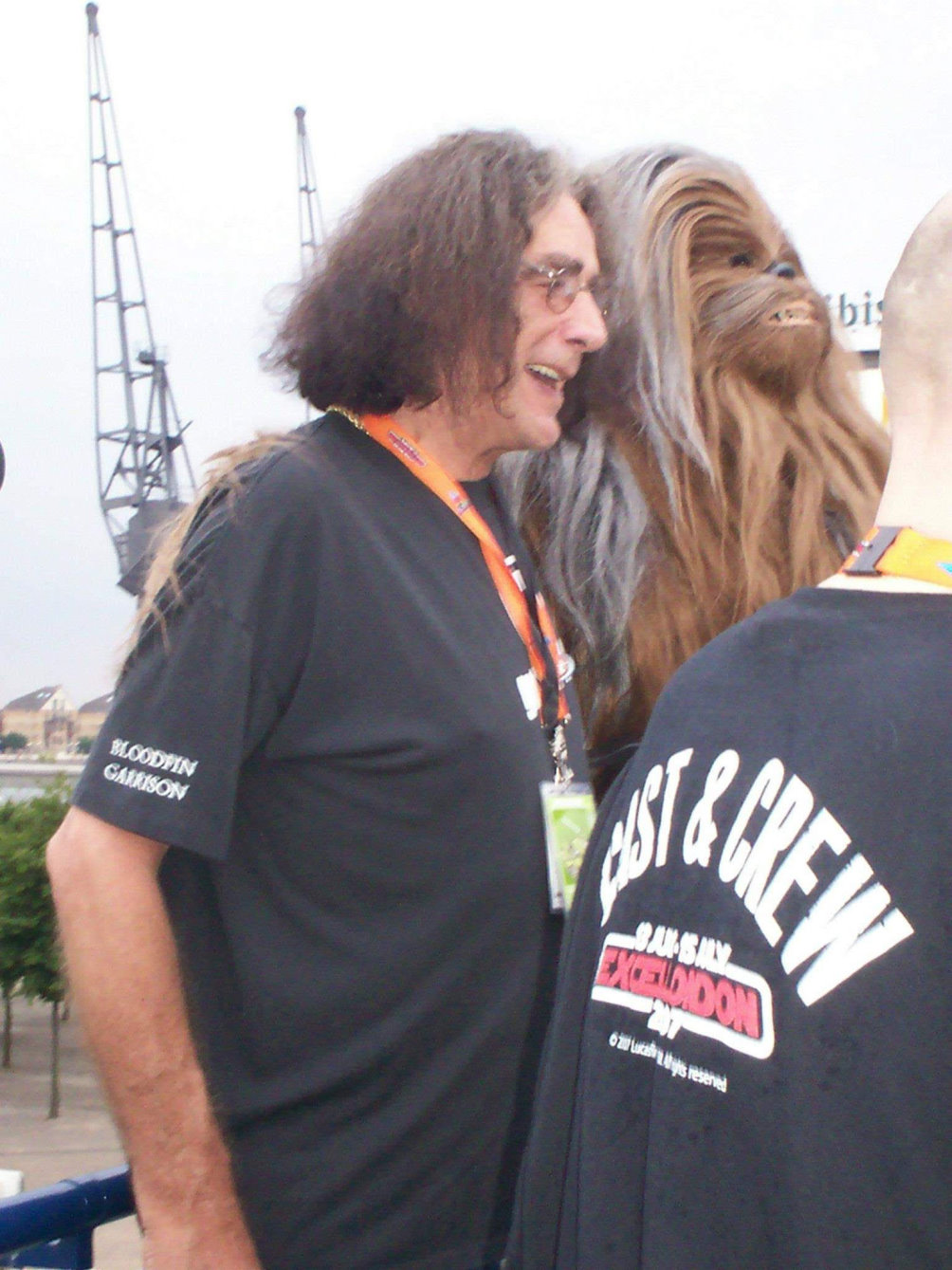 One of my first Star Wars autographs was a Peter Mayhew signed Chewbacca picture from Official Pix, purchased in 2007 prior to his announcement for the first Celebration Europe in London. Had I known he was going to be attending the convention, I would have held off and picked this up in person.

Celebration Europe in 2007 was the first convention I ever attended and was a dream come true to get so close to the stars of my favourite films. My wife Holly was heavily pregnant at the time with our first son Elliott, so we often would pop outside to get some air as the convention hall was like an oven at times. It was during one of these cooling off periods that we saw the legendary Peter Mayhew in person for the first time. 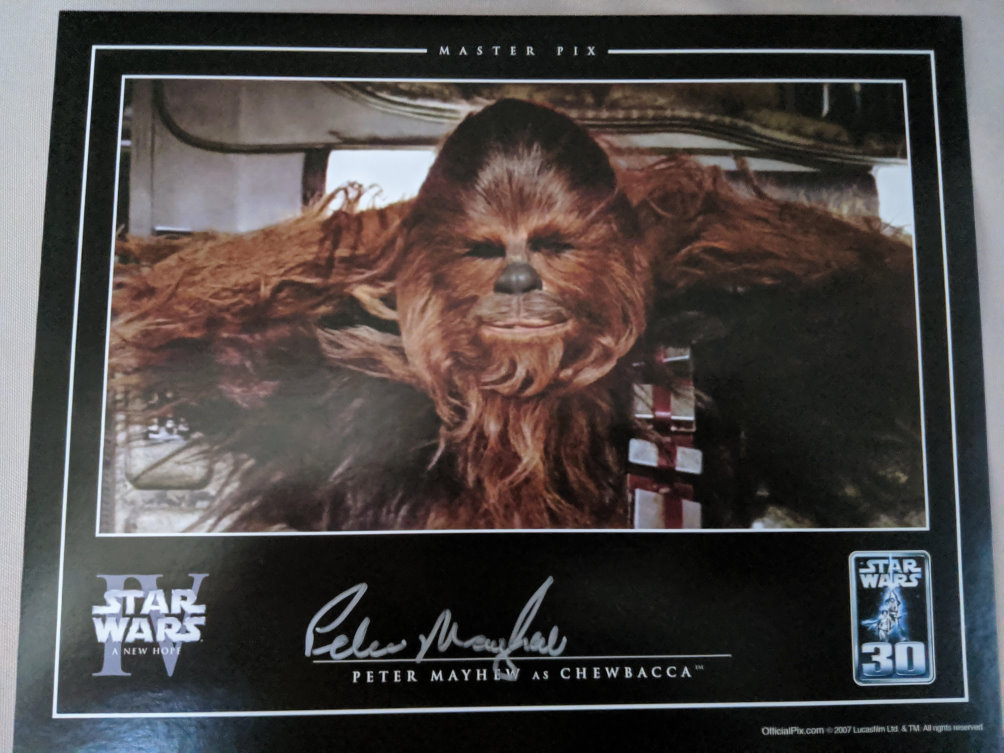 Standing so close to Peter, the mighty Chewbacca was one of those goosebump moments that I’ll never forget from this event. I don’t use the word regret often, but I do regret not taking the opportunity to get a picture with Peter over the years. You live and learn, but if I can offer a piece of advice to any fan – don’t hold back meeting your heroes!

I’m going to miss hearing Peter talk about the franchise that made him a household name but will always be thankful this loveable gentle giant was a part of all our lives.

We had just married and moved to England, I was quite homesick my husband wanted to show me how brilliant it would be living on the mainland and how everything was now so close and so accessible! So what is a husband to do to impress his newlywed but book us tickets to a comic con at Earls Court London! I couldn’t quite believe as we traveled down on the train I was going to see people I had only ever dreamed about meeting!

The headline actors were 3 of the stars of Star Wars Carrie Fisher Kenny Baker and Peter Mayhew. We arrived before opening and got in as soon as the doors opened, I walked in and there they were…

3 icons of my childhood talking and carrying on this could have been in the cockpit of the Millennium Falcon for all I cared! It’s with fond memories that I look back at this now. I was lucky they were all in great form and willing to share stories and have photos taken.

Peter was a true gentleman he asked where I had come from, why I liked Star Wars, I think he was surprised that it was me not Marcus getting the autograph! We talked about his costume and I thanked him for being part of my childhood. It was an amazing experience and something that I won’t ever forget.

I did catch glimpses of him after that at various conventions and celebrations and said hello in passing in London and Orlando however that first meeting was something else and I felt it was just right and my autograph hangs pride of place!

Farewell Peter and thank you!

Peter Mayhew: The wookiee roared for the final time two years ago today

The Star Wars Show: Journey to Star Wars: The Rise of Skywalker Books Revealed, Plus YOUR Star Wars Day Messages