Anyone who wants to truly call themselves a fan of the Star Wars franchise must be an owner of some of the films’ merchandise, whether it be t-shirts, figurines, or even a lunch box. As well as changing the science fiction genre, Star Wars was also a pioneer of the movie merchandise industry, creating toys aimed at children that generated significant revenue for Lucasfilm and also providing additional promotion for the films.

Aside from collecting merchandise, there is another way you can prove your true fandom of Star Wars. Although the film was set in a “galaxy far, far away”, the actual filming locations are much closer to home. Filming has taken place on all continents except for Antarctica, with locations that include Death Valley, Laamu Atoll and Tunisia.

Being at the forefront of the technology in the film industry, some of the more recent Star Wars films were produced by filming in these locations without the actors, adding them in later using computer generated imagery effects. This significantly reduced the cost of production, an important element for a genre of films that are generally expensive to produce. Whilst some of the actors may not have been there in real life, you certainly can.

Whippendell Wood, located in Watford’s Cassiobury Park was the location for the filming of the Naboo Forest scene in The Phantom Menace, where Qui-Gon Jinn and Obi-Wan Kenobi meet with Jar-Jar Binks for the first time. It was also used as a sacred place for the Gungans, the species to which Jar-Jar Binks belongs. Unfortunately the pond that they swam into doesn’t exist, the water was added thanks to some clever special effects but the area is there if you look hard enough.

Whippendell Wood provided three separate locations for filming, all of them quite small. The easiest to find is right across the road from the car park: the area is relatively small but was captured from many angles to make it appear much bigger. It is quite easy to spot and match up the film with the trees that have grown to a slight angle and the hills in the background.

Getting to Whippendell Wood is easy, as it can be reached on foot, bicycle or car from Watford town centre, with a 78-space car park for those travelling by car, however this can get full very quickly. Public transport is another great option, with London Underground services to Cassiobury Park, National Rail services to Watford Junction and several bus routes servicing Cassiobury Park. This makes this location easily and cheaply accessible for tourists visiting London without the need to book a special tour.

Wadi Rum, which translates to the Valley of Sand, is a 720-square-kilometre area of sandstone desert located in Jordan. It has been used as a film set since 1962 when it was used for much of the film Lawrence of Arabia. Its red sandstone makes it perfect for depicting Mars and Mars-like planets, hence its being featured in Red Planet, The Martian and The Last Days on Mars, as well as in Episode IX where it depicted Planet Jedha. One tourist who was in Wadi Rum at the time of filming took to social media to say that they had been asked to avoid a particular area of the desert as the film crew had set up a lot of pyrotechnics, as well as to report seeing a “tent city” with large trailers supporting the film’s production.

The area has become a major tourist attraction that generates a lot of revenue for the local economy from people taking day trips, eco-adventure vacations, and hiking holidays. Wadi Rum is such a popular destination that tours to it are available from several nearby and neighbouring countries, including Israel. The country, which is hosting the 2019 Eurovision Song Contest, where bookmakers have predicted Australia with best odds, is awash with its own historical and cultural landmarks, but Wadi Rum is a cut above many of these. 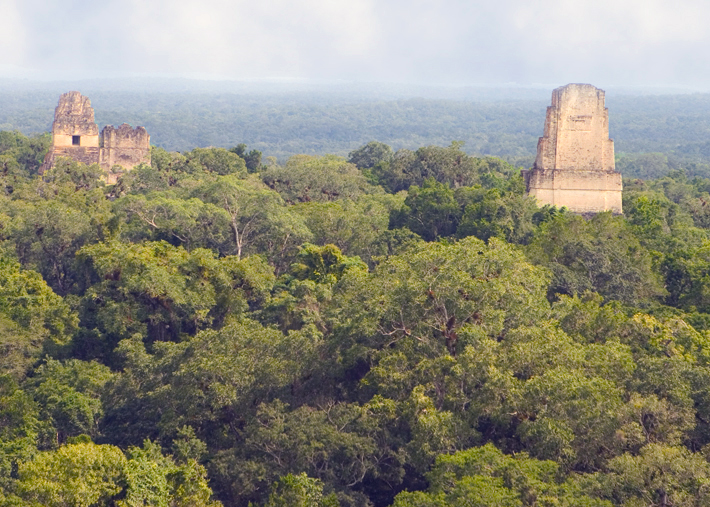 Used in the film “A New Hope”, the Mayan ruins in Tikal National Park were used as the exterior façade of the Massassi Outpost of the Rebel Alliance. The film also contains a panoramic shot over what is depicted as the Yavin IV Jungle with the Mayan ruins poking out through the jungle canopy.

Visiting Tikal National Park is easy, with regular tours from Guatemala and nearby Belize, Cancun and Chetumal. The tours generally require you to fly to nearby Flores, with day trips and longer tours with accommodation available.

After seeing the outside of the Massassi Outpost, take a trip to Cardington Airfield in Bedfordshire, United Kingdom to see the location used for the inside of the Rebel Base. The former Royal Air Force base was used in both Episode IV and Rogue One.

Previously known as RAF Cardington, the site was used to house airships and balloons, with two listed airship sheds used in the filming of two Star Wars films. As well as Star Wars, the site has been used for the production of other films, including Batman Begins, The Dark Knight, Inception, and Chitty Chitty Bang Bang. The site has also been used by the TV show, Top Gear, and by Rihanna, for her music video for “Shut up and drive”.

The site can be accessed by car and train, the former requiring a 45 minute drive from the M25 motorway that circles London, and the latter being a 35 minute trip from London St Pancras and a short taxi ride from Bedford train station.

In a franchise with as many films as Star Wars, it’s understandable that there are so many locations around the world featured in it. This is by no means an exhaustive list, but provides an insight to the breadth of variety in locations used by LucasFilm. From mundane wooded areas inside British parks, to ancient Mayan sites and from abandoned airship sheds to beautiful sandstone deserts, visiting the Star Wars locations will add plenty of variety to your travelling.