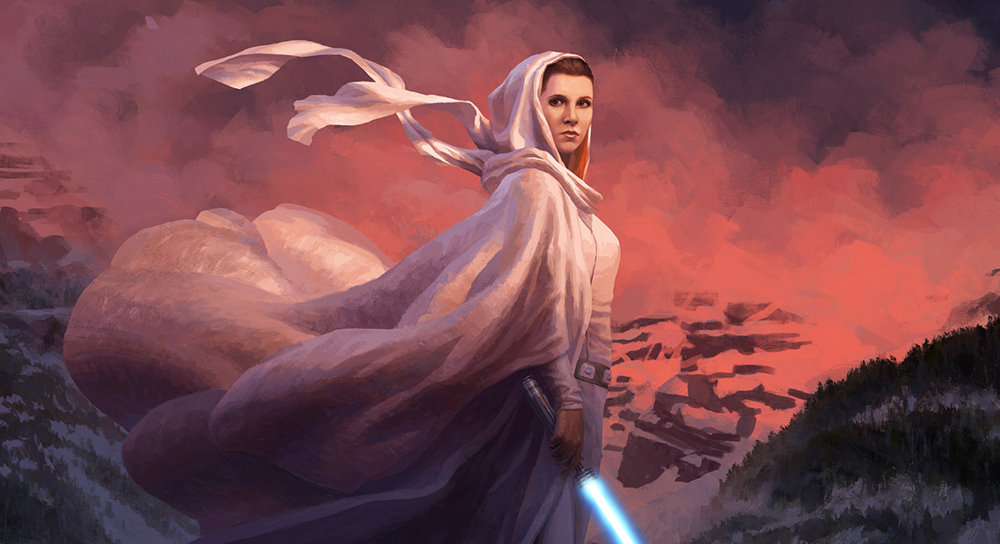 This stunning Princess / Jedi / General Leia piece is highlighted over at StarWars.com as artist Christophe Vacher discusses the journey to bringing Leia to life in a post-Return of the Jedi moment.

StarWars.com: Star Wars fans have rarely seen Leia Organa carrying her lightsaber, so I was thrilled when I first saw how you’d captured her. What inspired this interpretation? 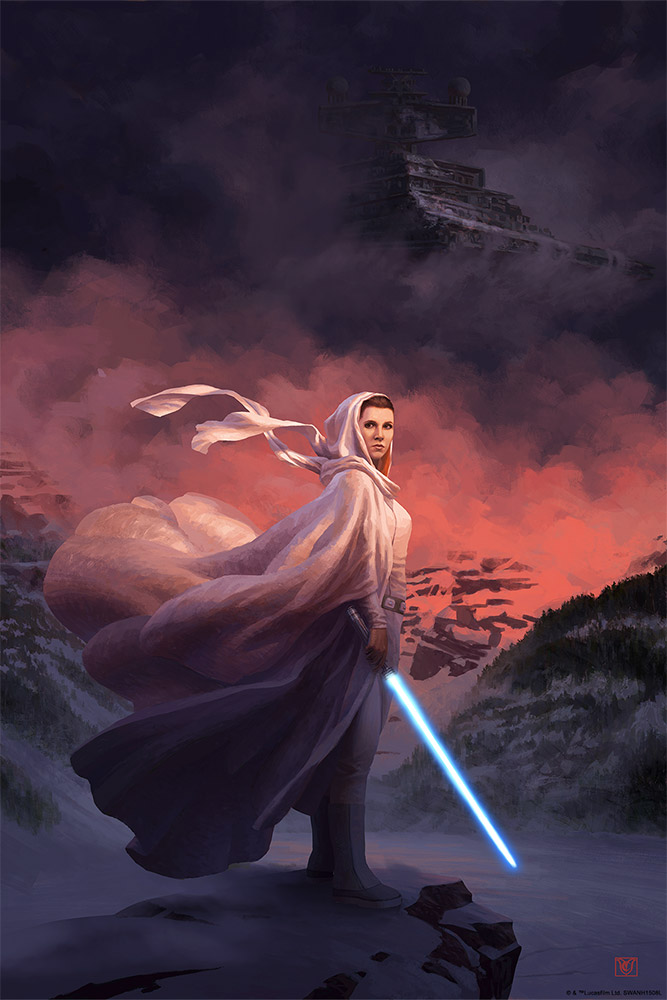 Christophe Vacher: At first, I wasn’t sure how I would visualize Leia, but I knew I wanted to put her in some kind of epic or heroic situation, yet without being corny. While I was putting together some ideas for the piece, I went to Lake Louise in Banff National Park in Canada in December 2019. I had wanted to visit it for 20 years, and was fascinated by the beauty and scale of the place, especially in the depth of winter, while the lake was frozen and the snow covered everything. When I came back, some visuals started to connect in my mind, that epic snowy landscape, and the idea of Leia in the middle of it. What I had seen in the last Star Wars, that short sequence where Leia is trained by Luke, started to trigger questions: what happened to her in those times? How long was she trained? Why did she eventually become a general instead of a Jedi, and did she make that choice or was she pushed into it?

StarWars.com: Your work often has a hauntingly ethereal quality to it, like something from a dream or a fantasy world. Beyond the beautiful mountain scenery, can you tell us more about the composition, especially some of the details like Leia’s robes, which look similar to her dress in Star Wars: A New Hope but fresh and new, and the meaning of the Star Destroyer looming overhead? In your headcanon, where does this scene take place?

Christophe Vacher: Thank you. I love to paint haunting ethereal and epic sceneries. Some of my major influences are the European Symbolists from the 19th century, like Arthur Hacker, Ferdinand Keller, Arnold Bocklin, or even later, the amazing Alphonse Mucha. Although I’d be lucky if I had half their talent. For Leia’s body outfit, I tried to get inspiration from other outfits I had seen in recent Star Wars publications that were depicting a Leia from A New Hope, so it would be consistent with what is out there right now, and I added other elements, like the boots and the robes. I had done another version with just the body outfit without the robes, and it revealed more of the mountains behind her. I liked it too, but it was obvious that the floating robes and the scarf were giving a more epic dimension to the image.

Regarding when this scene takes place, I see it happening after Star Wars: Return of the Jedi. Eventually, as J.J. Abrams states it, “she makes that personal choice of becoming a general instead of a Jedi,” maybe for selfless reasons, because she feels her people needs her more than ever to lead the fight against the new threat of the First Order, rising from the ashes of the Empire. Since the timeline was kind of loose, I just picked an environment where she might have been training, and where the First Order might have tracked her. The Star Destroyer coming out of the clouds in the background was an idea that came later, at the same time as the title, symbolizing the shadow of things to come and the moment she makes that personal choice.

From A Certain Point of View: What was Leia’s greatest moment?

Episode IX: Could footage of Carrie Fisher from The Last Jedi be used in the final chapter?

Motherly love in the Star Wars Universe: How hard can it be?