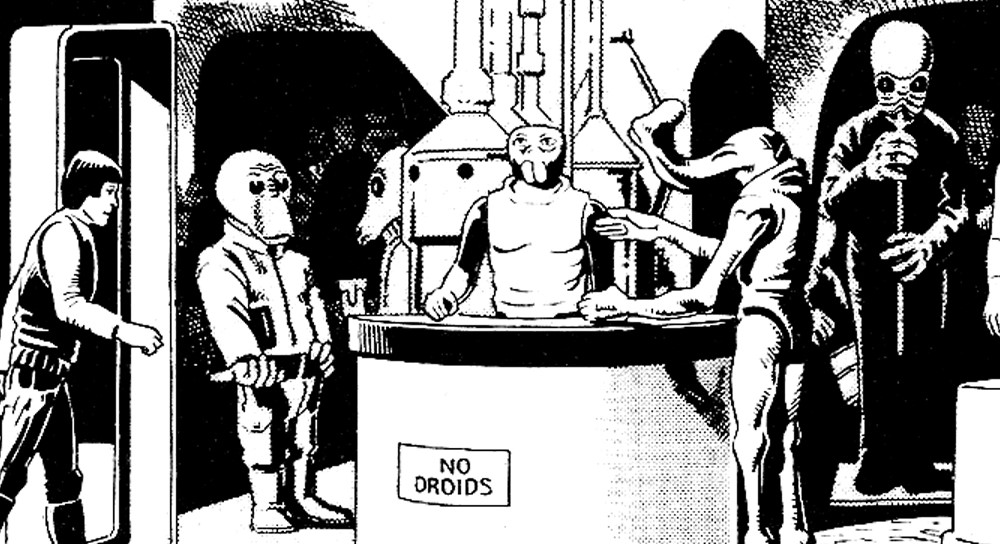 Whenever there is a piece of Star Wars related news, be it connected to the production of The Last Jedi, a video game preview or perhaps a new toy release, the revelation and the information is spread globally at the click of a button within seconds.

With the recent ‘Force Friday’ launch and the media attention it brought, videos from various locations from around the world can be streamed live across YouTube, Facebook and Instagram as they happen, it’s pretty hard to imagine a time where getting any Star Wars message out there presented a challenge.

The General Mills owned U.K. Toy Company that was to repackage and distribute the Kenner range of action figures, Palitoy, took a very different approach to its U.S. based counterparts in terms of promotion. Although benefiting from a six month heads up on the demand of Star Wars, it still was yet to prove itself to U.K. audiences, retailers and the advertising budgets that might be required to engage them 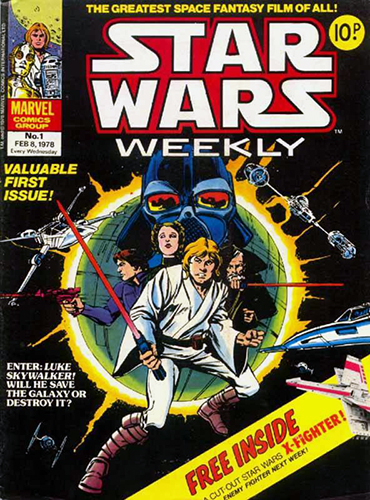 . Drawing on their experience in marketing of other toy brands like the best selling Action Man (the U.K. equivalent of the 12” G.I. Joe), Palitoy decided making use of the weekly outreach distribution of the U.K. Comics Industry would be the best channel to build awareness. Any advertising could be spread across multiple titles, targeted to specific readers of science fiction, with frequent weekly insertions and comparatively low cost in creating the advert compared T.V. commercials. Marvel U.K. were also given the task of reprinting the U.S. Star Wars stories into weekly issues giving Palitoy the perfect promotional platform. By focusing on comic book advertising, Palitoy would not only promote their products, but also go on to create some of the most distinctive and vibrant toy advertising associated with the original toy line.One of the most noticeable elements looking back at the early print advertisements is that they are monotone. 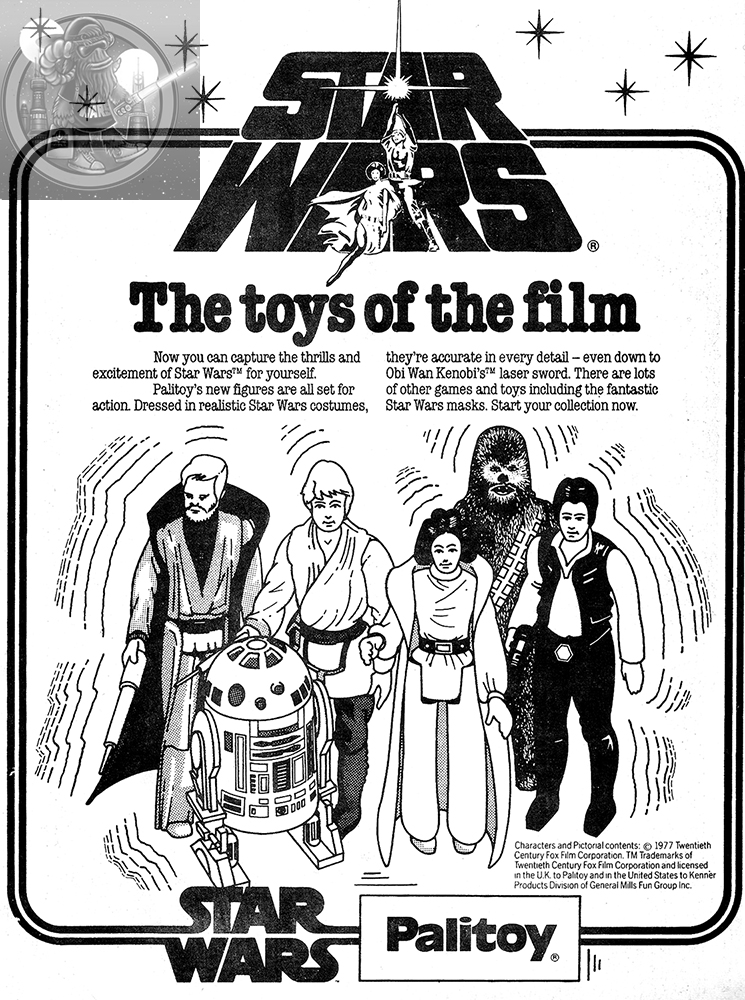 Most weekly UK comics from the late 1970’s were printed in black and white on “newsprint”, a low cost non-archival paper stock most commonly associated with newspapers, with only the cover and sometimes the centrefold printed in full colour. During the A New Hope era all adverts relating to Palitoy Star Wars toy releases were designed with black and white tones in mind. The very first adverts were literal line art representations of the toy products themselves, with a little annotation telling you about the products and through them suggest that you could continue the adventures of Luke Skywalker and his buddies. 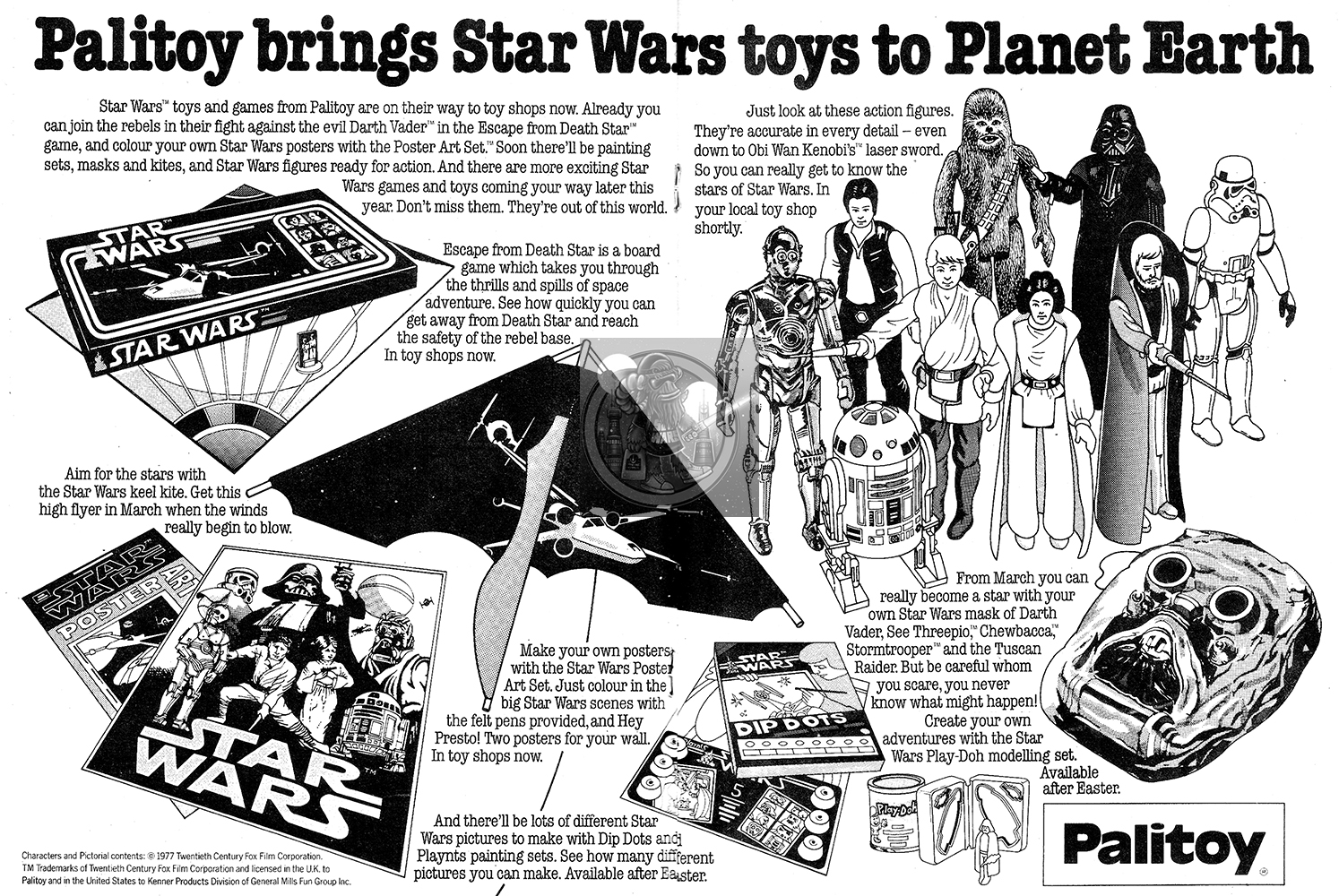 These adverts, whilst nicely representing the product, did nothing more to engage or suggest excitement, which would be needed to translate into sales of Palitoy Star Wars action figures over any competing products. They got the message across, but there was opportunity to make them more effective.

After the initial launch into the U.K. Palitoy would take a slightly new tactic in its print advertising for new waves of products that expanded the line, one that would enthuse a child’s imagination and the desire to expand their Star Wars toy collection. Although Palitoy employed capable artists they would usually be working on product or packaging art, so from time to time freelance artists would be given small projects to complete due to timescales or to maintain a particular theme. 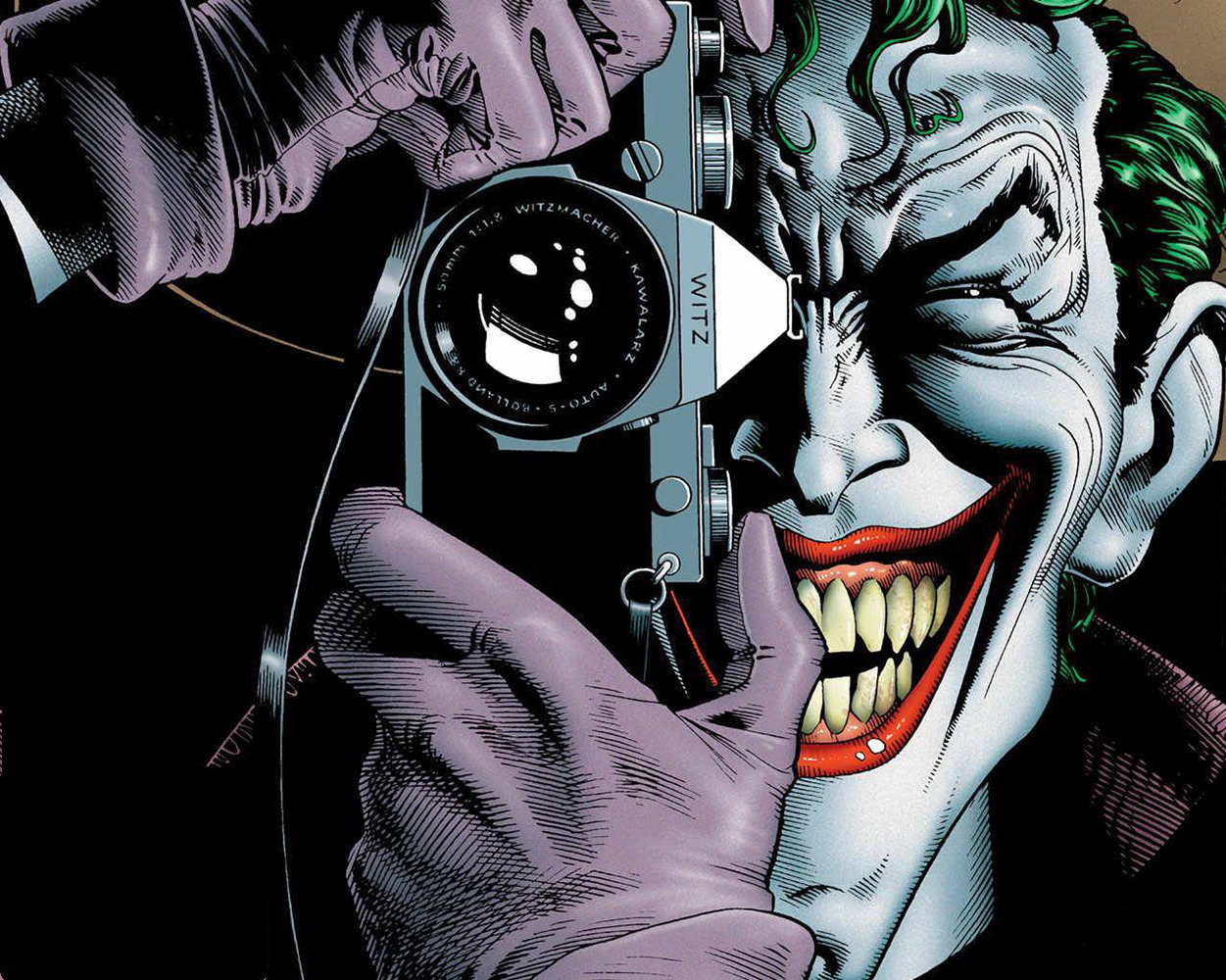 The freelance work was often taken up by comic artists to supplement income between comic strip assignments. One such freelancer, Brian Bolland, would later become best known as one of the definitive Judge Dredd artist’s and go on to provide D.C. Comics a wealth of amazing work including the legendary Batman: The Killing Joke cover, took on the challenge to create a message that went beyond the product it was advertising.

Using his experience from comics, rather than just representing the products, Brian designed the adverts to either work as a single panel or comic strip to create a scenario or 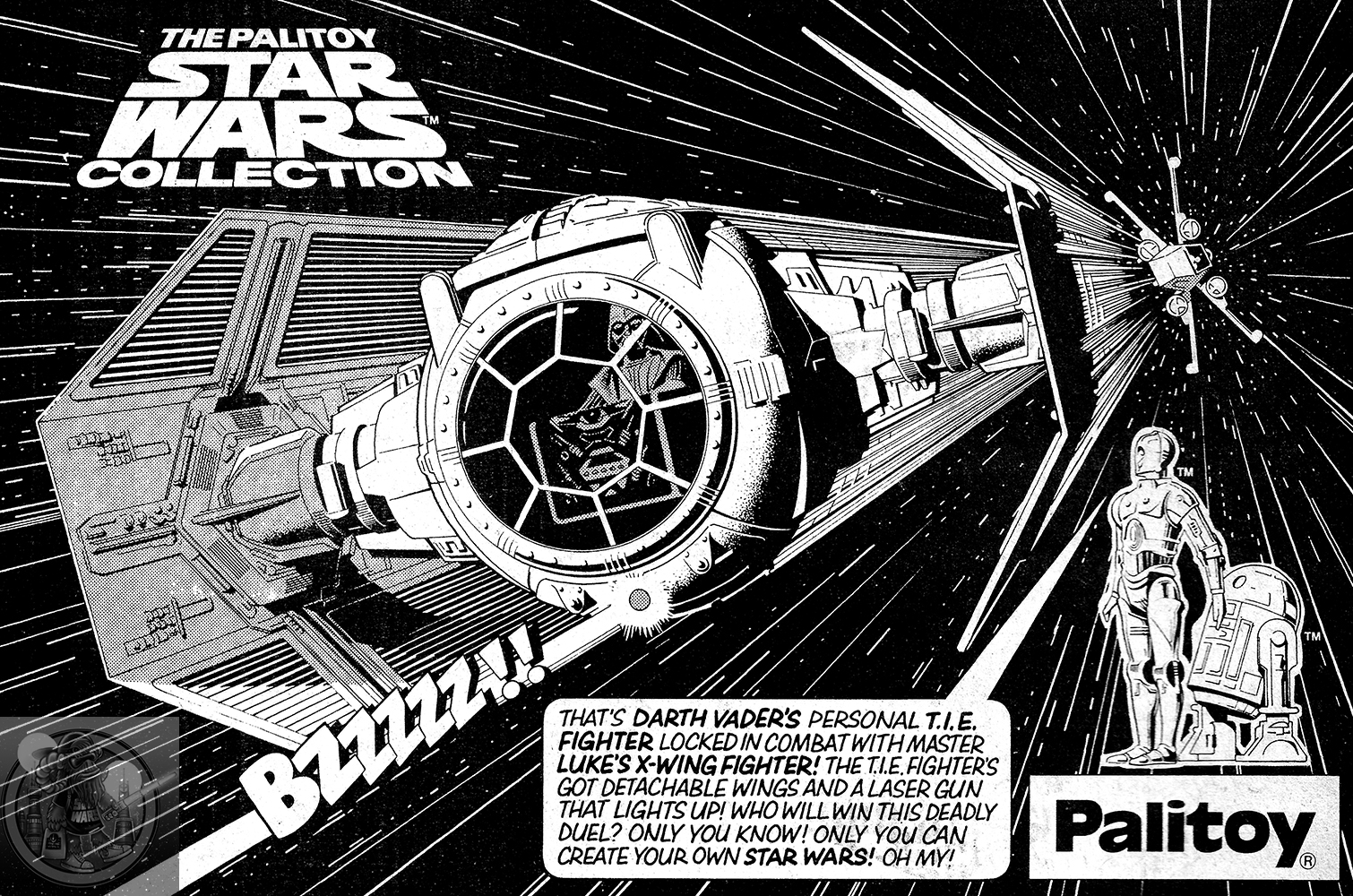 story, prompting the reader to imagine ‘what happened next?’ This form of advertising via graphical storytelling allowed Brian greater scope to represent the toys from interesting and exciting angles and perspectives not normally associated with product advertising. The best examples demonstrating this approach are the Darth Vader TIE Fighter and the introduction of the second wave of action figures. 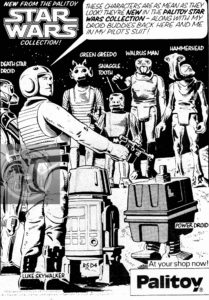 Introducing an additional 8 action figures with Luke, Droids and the mean Cantina aliens, is not the conventional way of print advertising with new product illustrated with their backs to the reader but it does create an exciting tense stand off. This advert was one of two that named “Green Greedo” as a new character, something that was only seen in the Palitoy comic adverts. 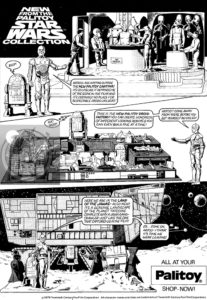 Reading more like a mini adventure comic strip, the introduction of the new Cantina, Droid Factory and Land of the Jawa playsets are of particular interest as they showcase for the first time the Palitoy versions of these products, which differed from the U.S. Kenner releases. Due to costs and availability early on, Palitoy cost-engineered down product and produced unique variations of certain products. In the case of each of these playsets, Palitoy utilized their accessibility to cardboard and vacuum form manufacturing. 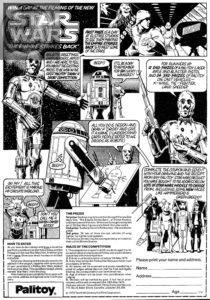 The last full page advert created not only promoted a competition, the prospect of a new film and Palitoy toy releases, but also positioned R2-D2 and C-3PO in poses and situations not normally associated with their characters, C-3PO touting a rifle, R2-D2 drawing a picture and calling C-3PO a ‘Namby Pamby’. However the grand prize of an on set visit to Elstree Studios to see filming of The Empire Strikes Back and to meet some of the stars was not to be scoffed at. The mini one page comic achieved a number of messages that would have been difficult to deliver otherwise.

For the next article we will look at further evolution of Palitoy’s print advertising as it moved into a new decade and a new Star Wars film.