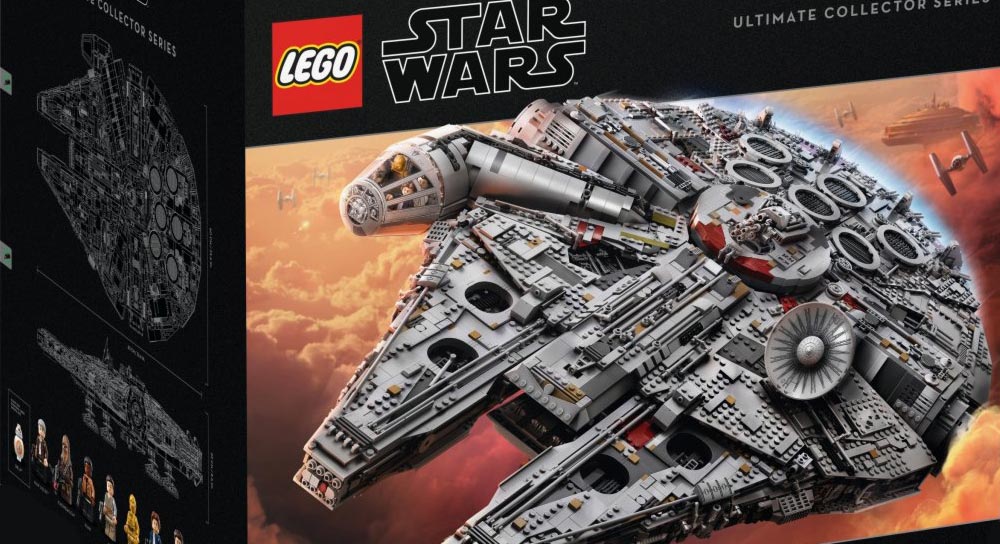 If you like Star Wars LEGO then you can’t fail to have noticed the UCS Millennium Falcon set. With 7541 pieces it is the largest LEGO set ever available to the public. It is also just plain huge at almost a metre long and over half a metre wide!

For several years I have had to put up with people buying it not to build it but to put in the basement until it gains value. It’s been driving me nuts!

I recently changed jobs and my leaving present from my colleagues was a gift voucher for a shop that just happens to sell the set. I had some other money saved so I swooped in and bought it. JOY!!!

Here’s how my build went…

First of all, what’s a build story without a good unboxing 🙂 The actual box is pretty impressive. It’s huge (as you’d expect) but also has some nice details. When you open it, you are presented with the instructional manual (more about that soon). Lift that out and you get four more boxes with a sectioned pic of the Falcon and a quote on each.

Inside each of the sub-boxes are the usual numbered bags that show what order you build in. For this set there are 17 sections each with at least three bags of parts. I really can’t stress enough just how huge this thing is!

Let’s get back to that instruction manual. The best word to describe it is MAHOOSIVE!!!

Before you even start to build, spend some time looking through the first pages of the manual. There are detailed descriptions of how the set was created, how the Falcon itself was designed and so on. It really is a very nice introduction to the whole build.

But enough chitchat. Let’s get building!

All in, I’d estimate that the build time was somewhere between 20 and 24 hours. It was a tonne of fun and I really enjoyed building it. But, am I happy with the final result? Well the one thing I have to admit is that I am very pleased with the sturdiness of the set. My last experience with the Star Wars UCS series was the original UCS Star Destroyer. While it was also a fun build and looked fantastic sitting in my home cinema, it was so fragile that it broke as soon as you looked at it. I’m very happy to report that this things, while not bombproof, can at least be picked up and move around fairly easily. They did a great job on the superstructure. Everything is tied together really well and it was only the last few sections where I couldn’t get a solid grip to pick the model up and throw it about any way I liked.

Secondly, I love all the little details in the set. Inside the compartments there is, as I’d expected, the dejarik table. What I had not expected was Luke’s training helmet from A New Hope, the belly gun from the Docking Bay 94 firefight and I loved how they dealt with the corridors that stretch around the insides of the “real” ship.

The mini-figures that come with it are really nice. From the original trilogy you get The Empire Strikes Back versions of Han and Leia both with and without gas masks and a mynock. From the new films you get an old Han, Rey, Finn, BB-8 and some Porgs. And spanning both trilogies are C-3PO and Chewie. The fact that the ESB Han and Leia are exclusive to the set doesn’t hurt them at all. Personally, I plan to build up my own set of figures from A New Hope. I’ve got Han, Chewie, Luke, Leia and 3PO. I just need to cannibalise some older sets and get an Obi-Wan and an R2. Since the model is based on ESB, my set will not be 100% accurate but, to be honest, I don’t care. That’s how I want it and that’s how it’ll be.

I guess the single most important question is, was it worth it? Well, the price tag is pretty hefty and it only seems to go upwards. Having said that though, how often will you get a kit this big and this amazing looking? Who doesn’t love the Millennium Falcon? And who wouldn’t want to have an almost one metre long version of it made from LEGO sitting in their lounge? Well, my wife, but that’s a different story!

What do the new The Rise of Skywalker LEGO sets reveal about the film?

LEGO Star Wars Stop-Motion Story: The One when R2-D2 and C-3PO Land Somewhere Else

LEGO STAR WARS – Stop-Motion Story: The One With The Giant Space Slug