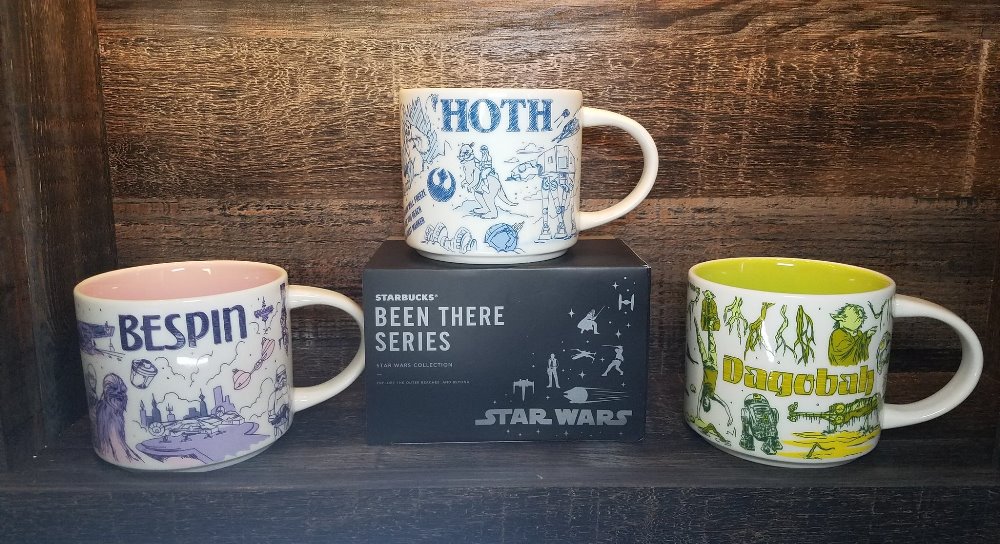 When the rumors began circulating about a Hoth version of a Starbucks “Been There Series” mug I was excited to say the least. I have this series of mugs from around the globe that I’ve collected for years and always thought it would be amazing to get Star Wars versions from the myriad planets and locations.

The fact that a Star Wars collection would start with three locations from The Empire Strikes Back—celebrating the 40th anniversary of the film—is almost as emotionally extreme to me as Luke Skywalker, after losing his hand and lightsaber, learning Darth Vader was his father. 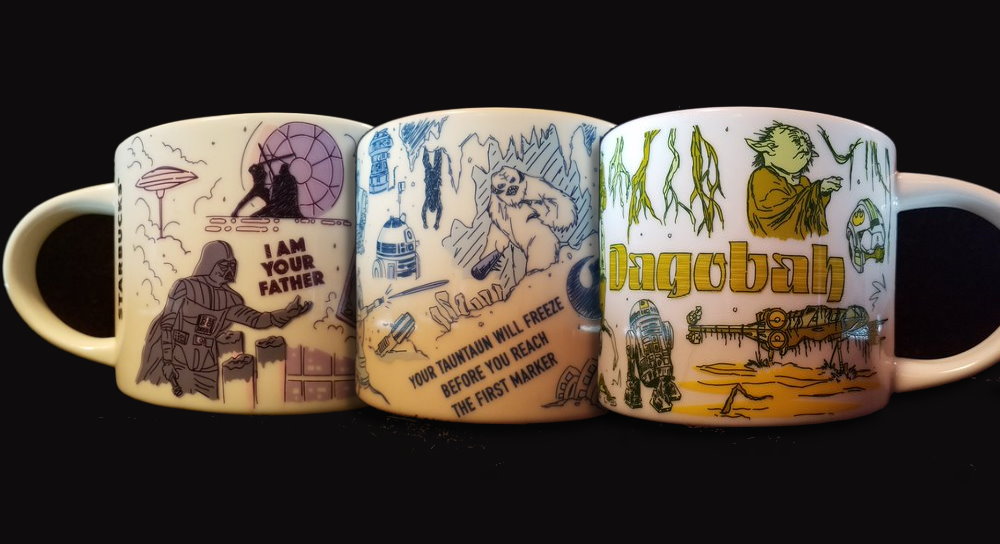 And I was one of the lucky ones on May 4, 2020 to get all three mugs from ShopDisney
—as online customers fought off the 501st snowtroopers that were lurking in the digital landscape—causing long waits and making sure some carts were grounded on Echo Base forever.

The sketch art is very fun as it stretches across the entire side of each mug. All three cups have a white base background and then a unique color scheme for the respective planet’s artwork. Hoth has a palette of dark blue, light blue and grey. Dagobah stresses the earth tones with a light green, dark green, yellow and a muddy brown. And finally, Bespin’s color palette is drawn from the sky hues seen during The Empire Strikes Back with purple, light purple, pink and grey.

Below is the list of sketches from each mug:

DAGOBAH
Luke’s pilot helmet
Dangling swamp vines (throughout)
Luke’s X-wing coming out of the swamp, covered in vines
Yoda using the Force
R2-D2
Luke doing a handstand while balancing Yoda
Flying Accipipteros (multiple)
Darth Vader in the cave
Yoda’s hut close-up
Luke swinging on vine with Yoda in backpack
Dragonsnake that swallowed, then spat out, R2-D2
Quote: “A Jedi’s strength flows from the Force.”
Yoda’s hut from a distance

BESPIN
Luke hanging from the weather scanner vane
Stormtrooper
Cloud City from afar
Cloud Car
The Millenium Falcon on Platform 327
Computer memory core from A’roFilter
Slave I
Chewbacca with blasted C-3PO in the netted backpack
Boba Fett’s Mandalorian helmet
R2-D2
Lando Calrissian
Han Solo in carbonite
Luke and Vader lightsaber battle in front of large observation port
Quote: “I am your father.”
Vader reaching out to Luke as he recites the above quote
Cloud City from afar

Fashion Force: It’s about family: Our Universe launch a Star Wars Collection for everyone