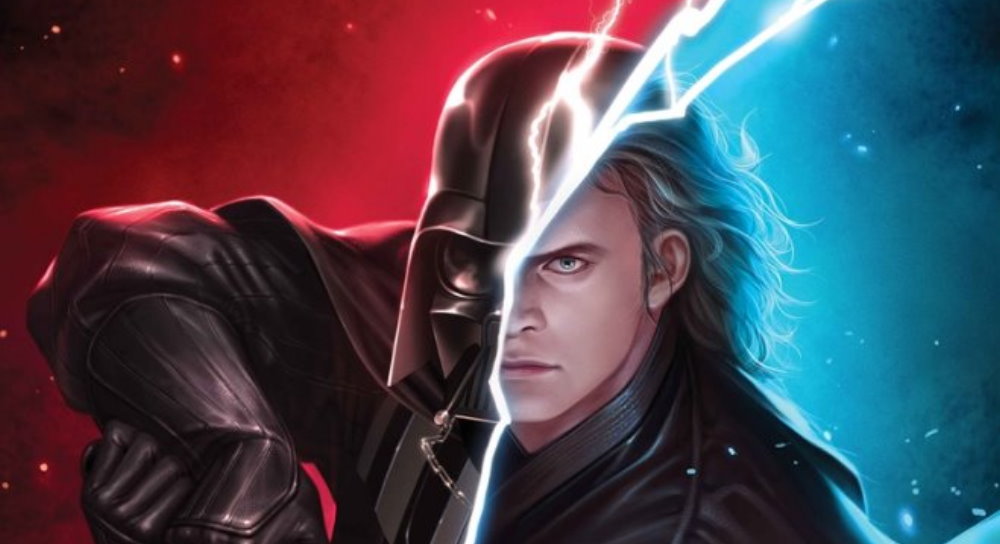 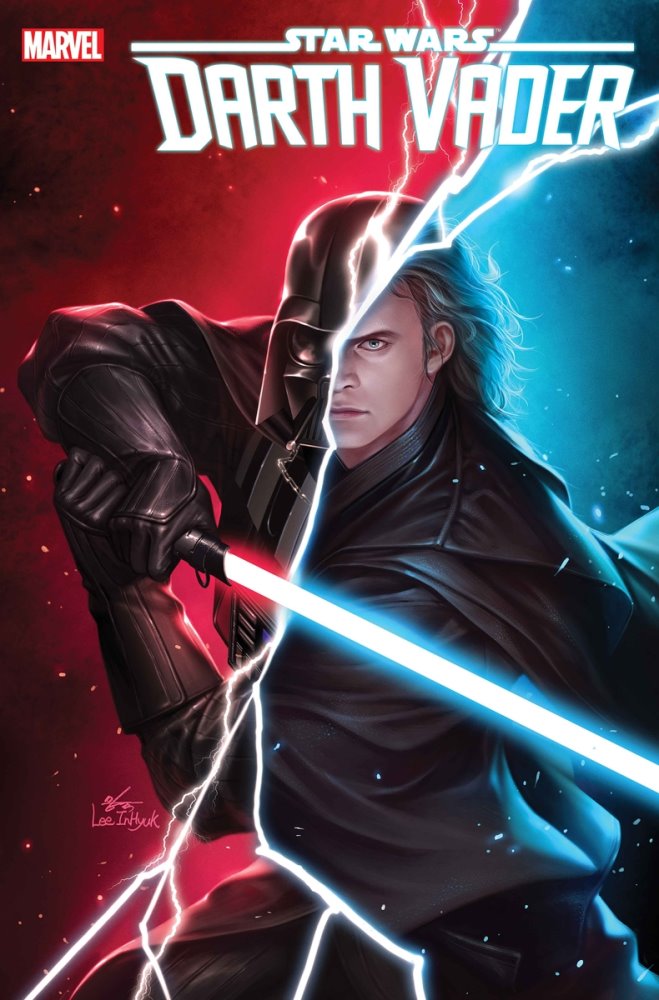 Enraged, Vader has taken a squad of death troopers and the Imperial forensics droid, ZED-6-7, on a quest of revenge against everyone who hid Luke from him. Vader’s new ally—Queen Amidala’s former handmaiden Sabé—has sworn a vengeance of her own against her queen’s killers.

But Sabé betrayed Darth Vader, believing the Dark Lord to be Padmé’s killer. Vader battled Sabé and her followers on Naboo before Padmé’s grave….

Within Padme’s tomb Vader stands ready to open the casket despite Sabe’s protests. A flashback to his life with Padme makes his reconsider his actions, and in the end he allows Zed-6-7 to scan the casket for clues to her killer instead. The scan reveals a medical implant, detailing that Padme received treatment at Polis Massa. Vader oddly implores Sabe and her Amidalans to follow him there.

Within the computers on the long abandoned Rebel Base, Vader and his droid discover than Padme arrived on the station with Obi-Wan Kenobi, and seek more answers but are interrupted by an attack by the Amidalans.

Vader quickly defeats them despite their far superior numbers. They struggle to find any more details of Padme’s medical treatment until they find a maternity droid. The maternity droid contains the final moments of Padme’s labour and life, where she mutters the name Kenobi. In anguish and rage Vader destroys Zeb-6-7. Leaving the base, and returning to his master The Emperor, who threatens Vader that he is been wallowing in grief, and he must now restart his training with fear…

Greg Pak gives us an unusual tale in this comic. He brings an end to an arc, with little in the way of conclusion. Delivers a very poor ending to the Amidalans, but entices us with an ending that promises much.

I don’t understand the logic of imploring the Amidalans to follow him, nor then easily defeating them at Polis Massa. They could have equally been forgotten and left on Naboo, as they were effectively already defeated. Equally I don’t understand the end to the arc. So Vader learns that Kenobi was last with Padme on Polis Massa, and what that provides him satisfaction in his quest? Surely with them both being on Mustafar, this must have always been his presumption. So what next, why is this confirmation enough to end his quest for justice / answers. It’s such an unsatisfactory ending to the arc.

Perhaps the saving grace of the issue is the ending where The Emperor basically tells Vader he is going to slap the wallowing in his grief out of Vader. Finally we are going to see real fire, with a Sith sending a lesson to a fellow Sith. I look forward to seeing more about the Power of Two dynamic between Vader and Palpatine, which is something we have seen little of in the past. This feels like we are going to get a deep dive into the psychological relationship between them, and I can’t wait.

Yet again Ienco’s art sets a level that other Star Wars comics should strive to hit. From the first massive panel of Vader towering over Padme’s casket, to recounting Prequel movie moments, to the large scale fight scenes, Vader powering over everyone in a two page spread, to the wondrous final panel of The Emperor in all his evil glory – Ienco just captures the essence in Star Wars in such incredible and rich ways.

Perhaps though the best page in the entire arc when it comes to art, falls in this issue. Taking the point that Vader looks down upon Luke at Bespin, to showcasing Vader falling into the abyss, then seeing himself as Anakin, and finally Young Anakin in subsequent parallel panels is such a brilliant way to capture Vader’s mindset. His entire life has led him to that moment, and he let his son fall into the abyss and that is so symbolic of Anakin’s entire life.

The other tremendous element of this arc has been the accompanying cover art by InHyuk Lee. So often cover art fails to pay tribute to the comics actual content, but InHyuk Lee’s work is so intricately connected to the comics story and such beautifully drawn.  We see Vader split between Vader and Anakin – the real emotionally rollercoaster of the comic played out in art. The vibrant split between Red and Blue, Dark and Light with the elegant matte blacks of Vader countered with the crystal clear eye on Anakin. It’s delightful, and Lee should be proud of his work across the whole arc. It is amongst my favourite arcs of Star Wars art, and certainly consistently the finest in the entire modern era of Star Wars by Marvel.

Star Wars: Darth Vader - Dark Lord of the Sith Vol. 2
$28.63
Buy on Amazon This is a paid link. Learn More. Clicking the link may take you to the Amazon store servicing your country Price incl. tax, excl. shipping.  Details correct as at: 2021-01-18