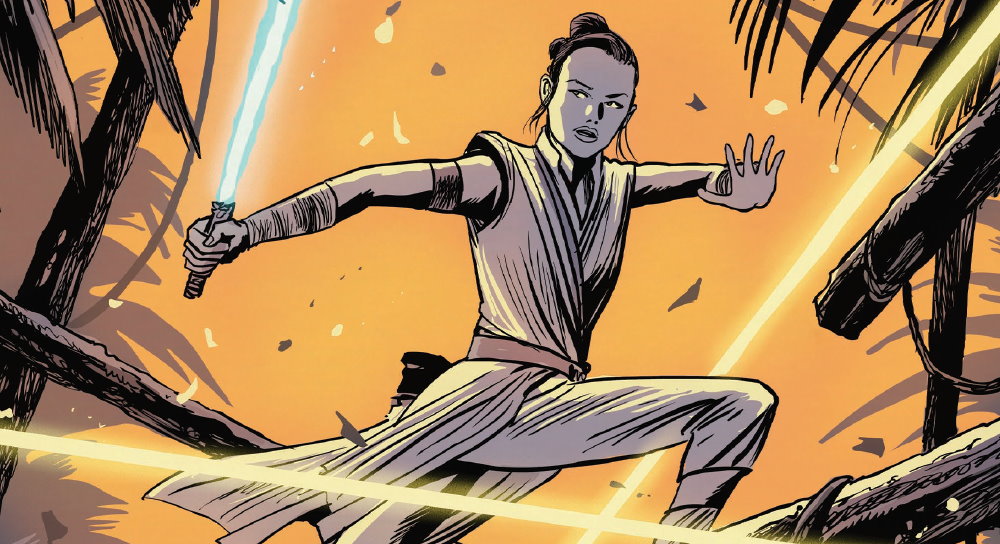 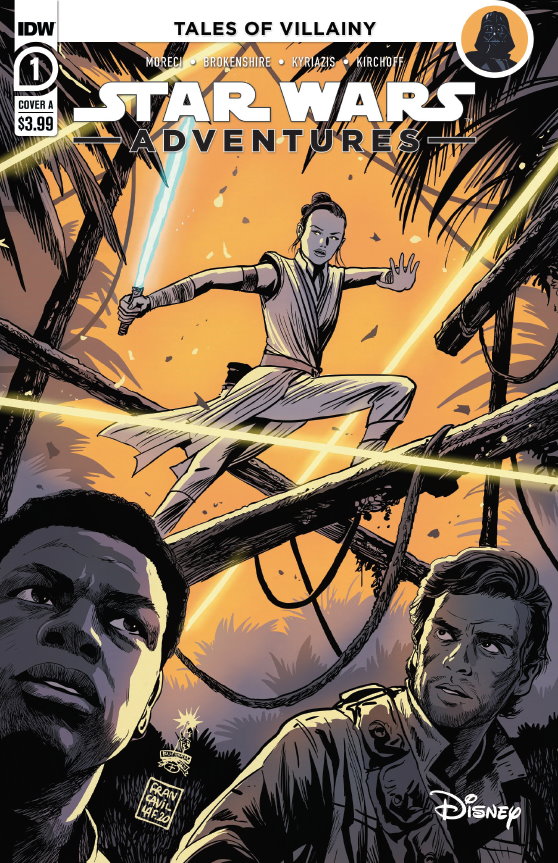 Each issue in this monthly series will feature two stories starring all your favorite Star Wars characters!

Between the events of The Last Jedi and The Rise of Skywalker, Poe and Finn have taken Rey to a remote planet to continue her Jedi training.

But they’re surprised to find that the First Order’s reach extends far and wide.

Plus, an all-new tale of the Dark Lord of the Sith himself, Darth Vader!

We kick off this new iteration of the IDW Star Wars Adventures title with The Obstacle Course, as writer Michael Moreci and artist Ilias Kyriazis take us to Noaxson, a ‘moon on the Outer Rim’ where we find Finn and Poe, BB-8 and Rey ready to take on an obstacle course. Tying in neatly with the terse exchange between Poe and Rey in The Rise of Skywalker, where Rey is busy training but not joining in the fight against the First Order, the guys along with R2-D2 design a course to test Rey’s Jedi skills. It makes sense, and Finn and Poe skew neatly towards young readers as does Rey and of course BB-8, and as we watch Rey take on the course (and see BB-8 display some impressive climbing skills using his cables) it’s a neat twist as they crash through the unstable ground into an underground cavern where a motley array of underworld types are seated, and none too pleased at their unexpected visitor.

Finn gets his Jedi tingle going, his sixth sense that was hinted at but not seen to its conclusion in The Rise of Skywalker, and the two head out to find her, only to be captured by the same pirates (including a male Palliduvan, the same species as Aurra Sing). Meanwhile the pirate boss recognises Rey and BB-8 as being wanted by the First Order and despite trying to talk her way out of it (life on Jakku likely taught her some evasive maneuvers in that regard) a scrap ensues that ends in a cliffhanger that will be resolved next issue.

It’s a fun tale, enjoyable drawn and packed with recognisable aliens (something IDW titles seem to revel in doing, there’s always loads to look at) and sits neatly in that Episode 8 to 9 stretch of time.

Our second story, Invasion of Echo Base, is written and drawn by Nick Brokenshire, and takes us around the Outer Rim to the wastes of Hoth during the events of The Empire Strikes Back as Lord Vader lands on the surface, on the hunt for Luke Skywalker and his allies. This is a definite tonal change, from the almost whimsical Sequel trilogy era story we’re right in the thick of it as Vader surges through Echo Base Rogue One style, interspersed with moments we saw in the film. Presenting paralleling moments from Luke and Anakin’s experiences, we see both of them in Bacta tanks, both reaching out to Obi-Wan, Vader on the lava shores of Mustafar and Luke prone on a Hoth icefield (or outside a Norwegian hotel depending on your point of view). As Imperial Snowtroopers bear down on Threepio, Han, Chewie and Leia we even get a nod to the infamous deleted scene of the wampa room, and watch as the Millennium Falcon escapes Echo Base, heading for the skies and an encounter with the Star Destroyer Avenger.

It’s beautifully crafted and drawn, both presenting new ideas and moments while seamlessly folding them into the Empire narrative we know so well. Brokenshire’s artwork has a distinctly British flavour, evocative of 1980’s 2000AD and Marvel UK and given the vintage of Empire this suits the tale perfectly. As a snapshot of a few moments in this, the greatest of all sequels, it’s a sweet spot in a 40th anniversary that isn’t over yet.

IDW really do have a knack for serving all areas of fandom. Kids and whimsical adults will enjoy the Rey tale, while the Hoth based story is crafted in such a way that it works for everyone. Youngsters reading this title who are not yet familiar with the Original Trilogy will surely use this tale as a jumping off point to further explore the Battle of Hoth; if this had been drawn and included in the classic UK monthly run of the early 80’s it wouldn’t look at all out of place (well, apart from the Lambda class shuttle which wouldn’t turn up until 1983 and Return of the Jedi, neatly retconned thanks to the Special Editions).