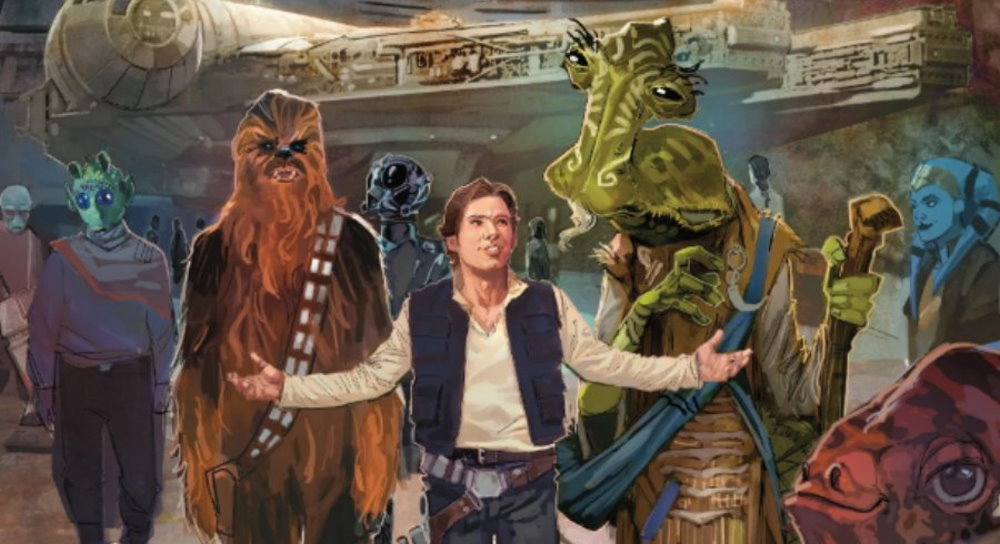 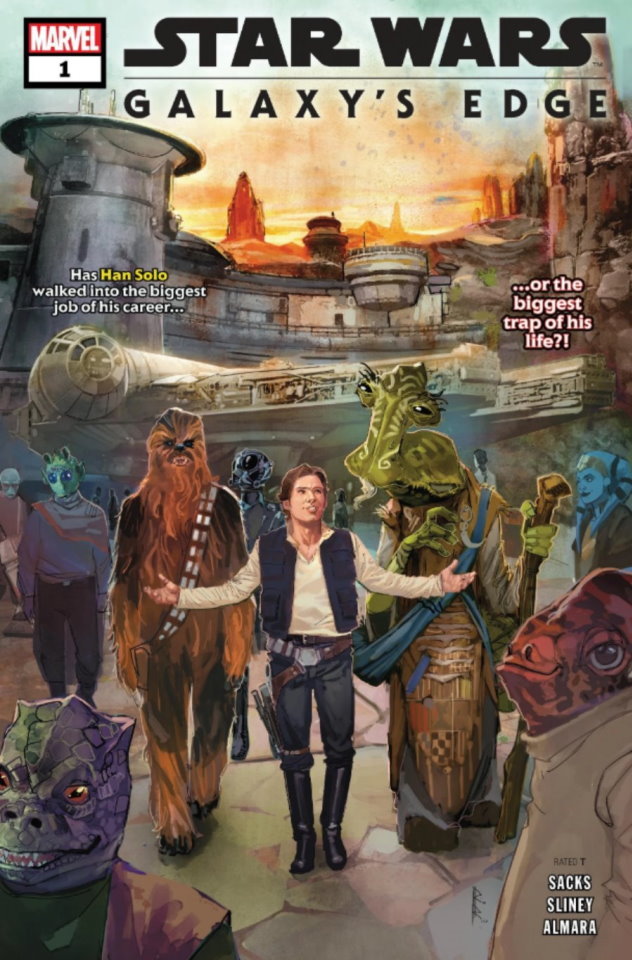 BLACK SPIRE OUTPOST is a haven for smugglers, merchants and travelers from every corner of the galaxy — all looking to make the score of a lifetime on the infamous black market.

War. The fall of the Republic. The rise of the Empire. Black Spire has endured. And the mysterious trader Dok-Ondar has weathered it all, thriving on the unique opportunities that abound in the lawless pockets of the galactic fringes.

But a new evil rises in the galaxy, one that may threaten even Dok-Ondar and Black Spire…

With the imminent opening of Galaxy’s Edge, the world is looking out for any and all slivers of information regarding the world of Batuu and the Black Spire Outpost and this 5-part mini series hurls us even deeper into the location by showing us Batuu in the present during the events of the sequel trilogy and by taking us into the past during the pre-original trilogy era when Han and Chewie fly the Millennium Falcon to I’vorcia Prime Preserve in the Outer Rim on a mission to pick up a deadly cargo – sarlaccs.

Yep, we’re nicely tying in not only with his Rathtar hauling exploits of The Force Awakens but his work in Han Solo At Stars’ End when he was willing to transport exotic creatures. The fact that it appears he only owns one pair of trousers, a shirt and vest aside (unless he uses Lando’s old cloak room to keep multiple blue trousers white shirts and black vests), we’re on classic Han Solo adventures territory as he lands on I’vorcia Prime and walks into a double-cross that involves the theft of his ship and tackling sarlaccs at very close quarters.

It’s a fun issue for sure, full of classic Solo barbs and lines backed up by Chewie on fierce form rampaging through the opposition like the furry fury we know he is. The majority of the issue may be set far away from Batuu on a previously unseen planet (with such a vast database of planets in place in the Star Wars galaxy, why don’t we revisit planets more often? A neat touch in this new era of the Star Wars title would be to head back to worlds we saw during the original Marvel run and investigate them more) but what we see of the location, especially in Dok-Ondar’s Den of Antiquities, is evocative, only making us keen to see more when the park opens.

Of course, while we’re seeing teases of Galaxy’s Edge there’s another reason for this series existing. Galaxy’s Edge is a new IP for the Star Wars brand, one that we will be seeing a LOT of over the coming years. Don’t be surprised if an animated series takes advantage of the location at some point, as it’s custom built for an anthology series, but also the title allows us to be introduced to key Batuu characters such as Dok-Ondar who appears to be the focal point of this five-parter.

Writer Ethan Sacks does a solid job with a simple story, ably backed up by Will Sliney on art and Dono Sánchez-Almara and Protobunker on colours. The main and variant covers are stunning, and evocative of the Dark Empire covers back in 1991 where we saw glimpses of the lower depths of Nar Shaddaa, giving us enough of a look without giving away the moisture farm. I’m already invested in this title and more than keen to see what happens next.

Speaking of what happens next, the second issue will see Greedo enter Black Spire, giving us the opportunity to see him in action prior to his unfortunate meeting with Han Solo in A New Hope. Let’s hope we get to see more of Black Spire Outpost in that issue.