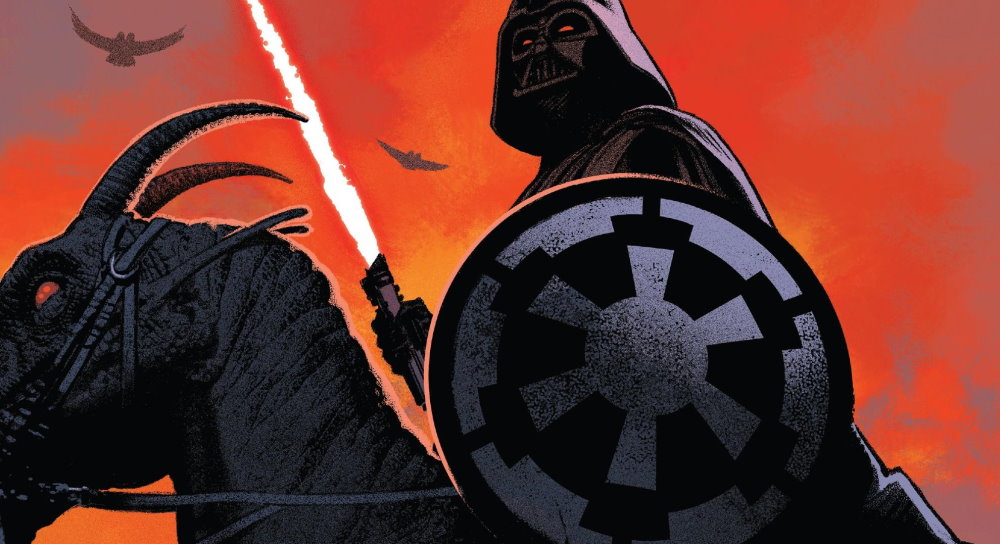 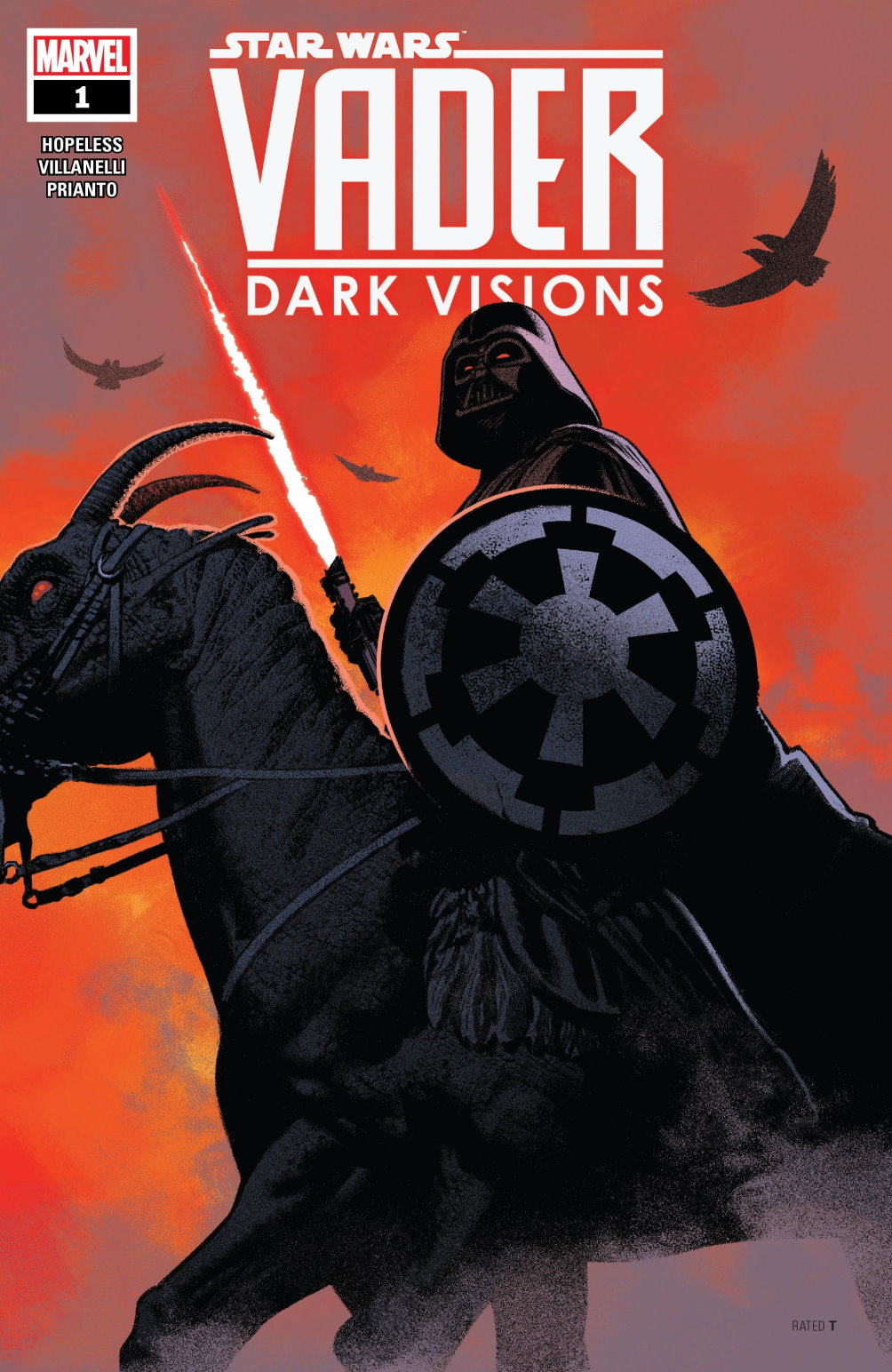 WHO IS DARTH VADER? He has been many things: a SITH warrior, a commander, a destroyer.

DARTH VADER is to many throughout the GALACTIC EMPIRE a symbol of fear and mysterious, otherworldly power. But there are some who have seen the DARK LORD in a different light. There are some corners of the galaxy so dark and desperate that even Vader can be a knight in shining armor.

The first issue of a new STAR WARS limited series, writer Dennis Hopeless (CLOAK AND DAGGER, JEAN GREY) sheds new light on the many sides of the galaxy’s greatest villain.

The first thing that strikes me about this particular Marvel title is its cover. Darth Vader sits atop a dark steed, with lightsaber in hand and a shield baring the Imperial cog against a fiery red background. It is an arresting image that immediately brings to mind legendary Arthurian knights rather than dark lords of the sith. 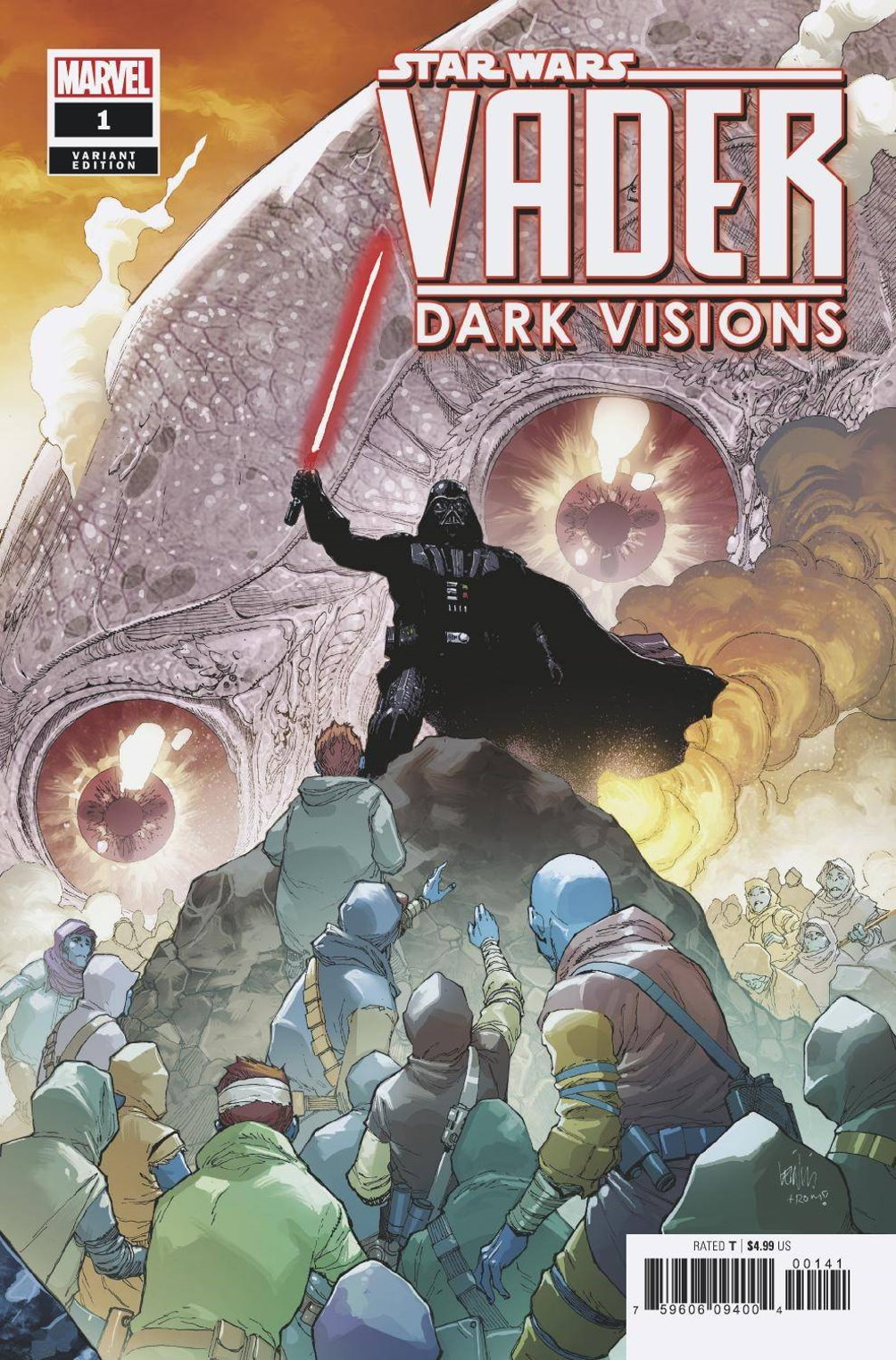 This limited series was described on StarWars.com as delivering ‘a side of Vader that neither fans nor the galaxy have ever seen before’ and this first issue certainly lives up to that promise. The comic is a somewhat self-contained story that is told from the perspective of a young boy on the ravaged planet of Cianap. The planet’s inhabitants are forced to dwell underground out of danger from ‘the ender’ – a huge kaiju inspired creature with a shark-like head which has decimated the planet’s cities. That is until Vader, seeking a place to repair his tie fighter, lands on Cianap and awakens the slumbering beast. The battle that ensues is brutal and epic, as Vader struggles to defeat his massive foe. Dennis Hopeless’ writing, though sparse in dialogue from Vader, captures the character perfectly, and it is easy to imagine Anakin Skywalker’s temper flare as he is first defeated then strikes back, this time riding the horse-like creature which graces this issues cover.

The art (by Paolo Villanelli with colours by Arif Prianto) is particularly distinctive; through the eyes of the young boy spectating the fight we see a Vader who is a little larger-than-life. Here he is depicted as an imposing warrior who’s saber crackles like fire.

Where this issue focuses on the raw power of Vader I’m hoping that each of the remaining four issues explore different facets of the character, but in a similarly new and exciting way. Overall this is an excellent first story, and I give it four decimated cities out of five.