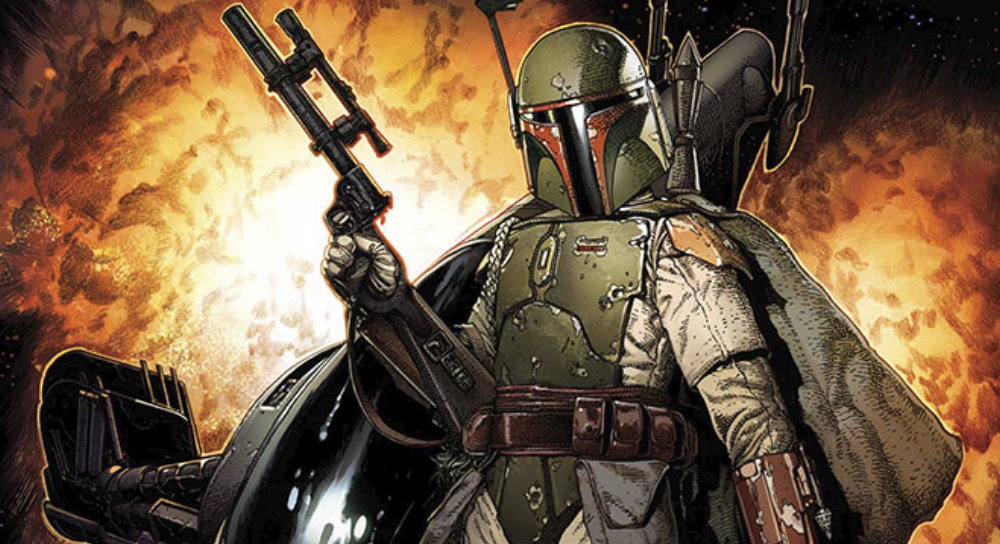 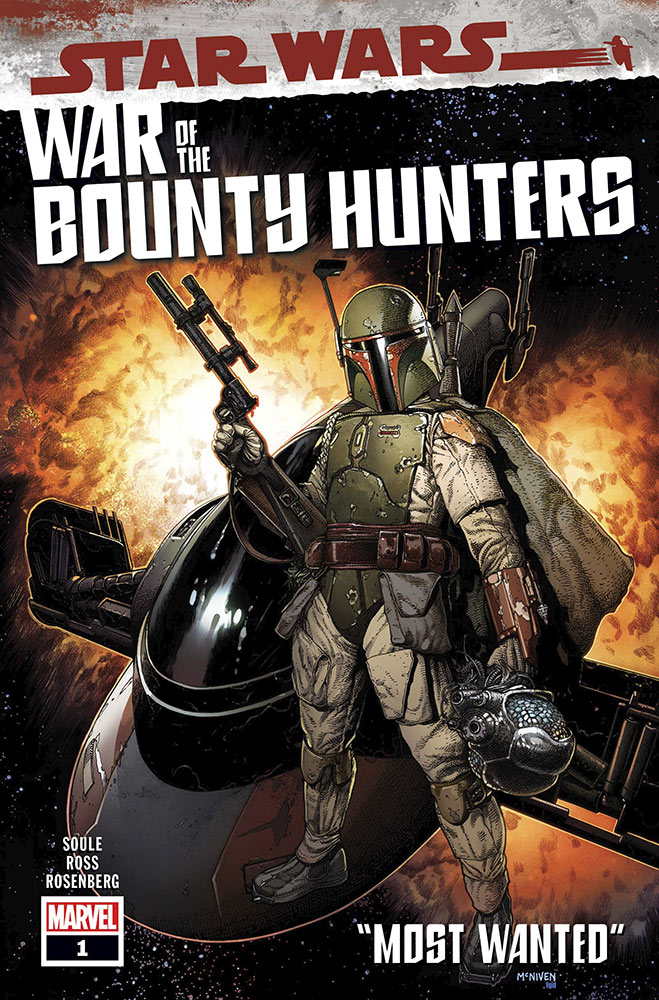 But Solo was stolen from Fett on Nar Shaddaa.

Who would dare steal from the galaxy’s most dangerous bounty hunter? This single act may change the galaxy forever….

We kick off strong as we gaze at coffee table Han Solo onboard the vast, butterly-like starship Vermillion somewhere in the Mid Rim. A hooded woman stands over him, wondering if Solo is conscious. James Kahns 1983 novelisation of Return of the Jedi described his carbonite prison as a long exhaled breath, a twelve month prison and he is awake for all of it. That may have changed in the current continuity – after all, we only hear the supposition of these characters, not the truth of it, presumably that will come later – but either way, this the grim reallity of Solo. Factor in the constant looming threat of his carbonite matrix breaking down and sending him to sludge, and Han Solo is not in the best place.

We jump across the stars to Nar Shaddaa, the Smugglers Moon which we last visited in Star Wars #13. This trip is in the company of a clearly annoyed Boba Fett, frustrated that Solo has been stolen from him and surprised that the huge bounty evry hunter inthe galaxy is chasing isn’t on the errant Corellian but on Fett himself. Cue John Wick vibes as he deftly avoiding an opportunistic attack by an eager amateur, and heads back to Slave 1 only to be ambushed by Zuckuss and 4-LOM (it will take me forever to forget 40 years of saying ‘LOM’ to now say ‘Elloem’, nevermind their names being back to front for most of that time) who have quickly taken up the opportunity to take out Fett for themselves. Fett makes short work of them, appearing to end Zuckuss and blowing 4-LOM to bits, keeping only his head as he hacks into the droid and learns that the bounty originated south, along the Tatooine Dash to the Arkanis sector where Fett takes Slave 1 to Jabba’s Palace and a testy confrontation with Bib Fortuna. Here he learns that yes, Jabba did place the bounty on Fett, believing he had sold Solo and broken their agreement.

There’s a healthy does of self-awareness about Fett in this issue. Keeping speeches to a minimum as he should – generous with blaster fire, he’s liberal with his words – he’s happy to remind people that he’s Boba frikkin‘ Fett, even Fortuna and a vast array of Jabba’s goons. Demanding to see Jabba, Fett learns he is offworld, a rarity as Jabba confers with other Hutt leaders about the return of an old adversary and as Boba enters the palace to see the ‘invitation’ Jabba recieved regarding Solo we learn as Fett does that Crimson Dawn are back and they’re led by none other than Lady Qi’ra, the long-lost Corellian love of Han Solo.

There’s so much to unpack in this issue. The splash page highlighting how Solo is involved in every corner of galactic affairs, tying people together in ways he likely doesn’t realise, the caution Fett’s fellow underworlders display when his anger starts to rise, the way Fett takes out the other bounty hunters like a Looney Tunes cartoon, knowing as we do that somehow they’ll be back. It’s fascinating to see other Hutts confering with Jabba in this era as we traverse the year to Return of the Jedi and genuinely exciting to see the return of Crimson Dawn and Qi’ra. You couldn’t hope for a more impressive start to the series, married with another deft script and plot from Soule and lush visuals that are a sight to behold. Steve McNiven gave us a treat in Alpha, and here artist Luke Ross matches that along with colouring work from Neeraj Menon that is just *chefs kiss*.

Right now we have a number of ongoing storylines in Star Wars fiction – War of the Bounty Hunters, the Chaos Rising trilogy, the recently finished Alphabet Squadron trilogy, The High Republic – as well as weekly episodes of The Bad Batch set 22 years prior to these events, and if the level of quality and attention can be maintained as it has been in this issue then we’re truly in for something very, very special. This time period is hallowed ground for many fans; wrong steps in the Hoth snow will only leave yellow footprints, but so far Alpha and War of the Bounty Hunters #1 have delivered the goods in a way that our beleagered Mandalorian bounty hunter could not. Enormously satisfying.