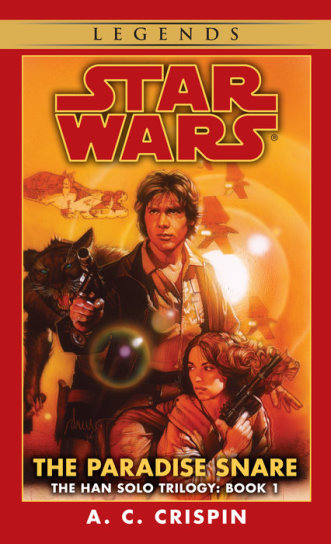 Han Solo was a child without a past, a Corellian street urchin, abandoned, foraging for scraps of food, when the cruel Garris Shrike whisked him away to a nomadic band of spacefaring criminals. Now, years later, Han fights his way free. His goal: to become an Imperial Navy pilot. But first he needs hand-on experience flying spacecraft, and for that he takes a job on the planet Ylesia—a steaming world of religious fanaticism, illicit drugs, and alluring sensuality…where dreams are destroyed and escape is impossible.

Here is the first book in the blockbuster trilogy that chronicles the never-before-told story of the young Han Solo. Set before the Star Wars movie adventures, these books chronicle the coming-of-age of the galaxy’s most famous con man, smuggler, and thief…

Here is the first book in the blockbuster trilogy that chronicles the never-before-told story of the young Han Solo. Set before the Star Wars movie adventures, these books chronicle the coming-of-age of the galaxy’s most famous con man, smuggler, and thief…

I use this sound-imitating word to express my feelings about this series of books.

Look, I not going to deny that I was bought the first book as a gift and then was compelled to buy the other two. I wasn’t bowled over by The Paradise Snare. I always had the feeling that Han Solo, when younger, was boisterous and adventurous but, unfortunately, these traits don’t really come across. I suppose it would be easy to say that those facets of his personality grew as he did but it would have been nice…

I digress. The Paradise Snare is very well written and, although I have not read any other Crispin works, I was impressed by the fluidity of the writing. Certain scenes, however, seem to drag with no apparent impact on the story. Just when you think things have boiled over and it’s time for some serious Star Wars action (which is what you expect from Han Solo) you feel kind of let down when the adventure is pretty low-key. 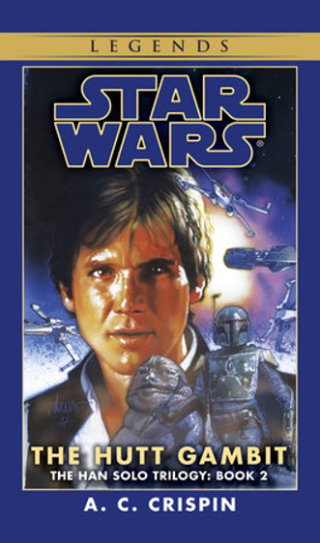 Once one of the Academy’s brightest stars, Han Solo is now a fugitive from the Imperial Navy. But he has made a valuable friend in a former Wookiee slave named Chewbacca, who has sworn Han a life debt. Han will need all the help he can get for the Ylesian Hutts have dispatched the dreaded bounty hunter Boba Fett to track down the man who already outsmarted them once.

But Han and Chewie find themselves in even bigger trouble when they agree to lend their services to crime lords Jiliac and Jabba the Hutts. Suddenly the two smugglers are thrust into the middle of a battle between the might of the Empire and the treachery of their outlaw allies…a battle where even victory means death!

From The Hutt Gambit I expected more, but what you are given is a long description and insight into Hutt politics, which, while interesting, you are quite willing to put aside for something to happen. 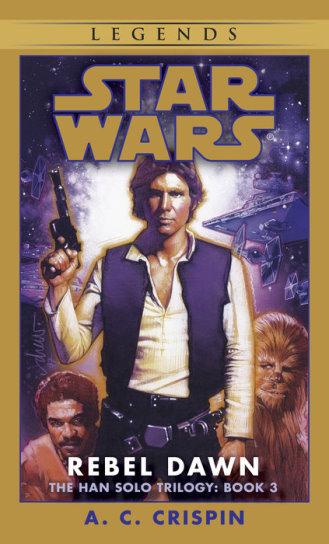 The Millennium Falcon is “the fastest hunk of junk in the galaxy.” So when Han Solo wins it in a game of sabacc, he and Chewbacca become kings of the smugglers—uncatchable, unstoppable. But with the Empire clamping down, Han knows his luck can’t last.

Still, when an old flame of Han’s, who is now the leader of an insurgent Rebel group, offers him a shot at an incredible fortune, Han can’t resist. The plan seems a sure thing. The resistance will be light, the take enormous. Han and his friends will divide it equally with the Rebels. Too bad for Han that the planet of Ylesia is far from a pushover, that the Rebels have an agenda of their own, and that smuggler friends can often turn into enemies…faster than lightspeed.

The final book, Rebel Dawn, is just a loose-ends tie up where things really start to happen. Although the end is predictable, it is a very good book which reads well at a very satisfying clip.

The whole trilogy is a work of background information. All three books are packed with characters pasts and their influence and relationships with Han Solo. It’s also an account of how Solo got into the business of smuggling, what happened when he joined the Academy and how he made friends and enemies alike. It’s a biography, basically.

Which is a shame. Star Wars has always been, to me, a story of heroism and space adventure, Saturday morning flick stuff where the heroes are cheered and the bad guys are booed. Over the last few years, especially with the release of The Phantom Menace the Star Wars universe has evolved into a story of not just black and white, good and evil, but a story with sharp contrasts in various colours. You can now get under the skin of characters, which is what these books offer.

So, if you want a series of books of grand adventure and excitement, you may find yourself a little disappointed with this series. If you want more information on the characters and their beginnings, then you can’t go far wrong. I do believe that these books will appeal to two kinds of Star Wars fan.

Myself? Give me a heavy blaster pistol and a fast starship anytime.