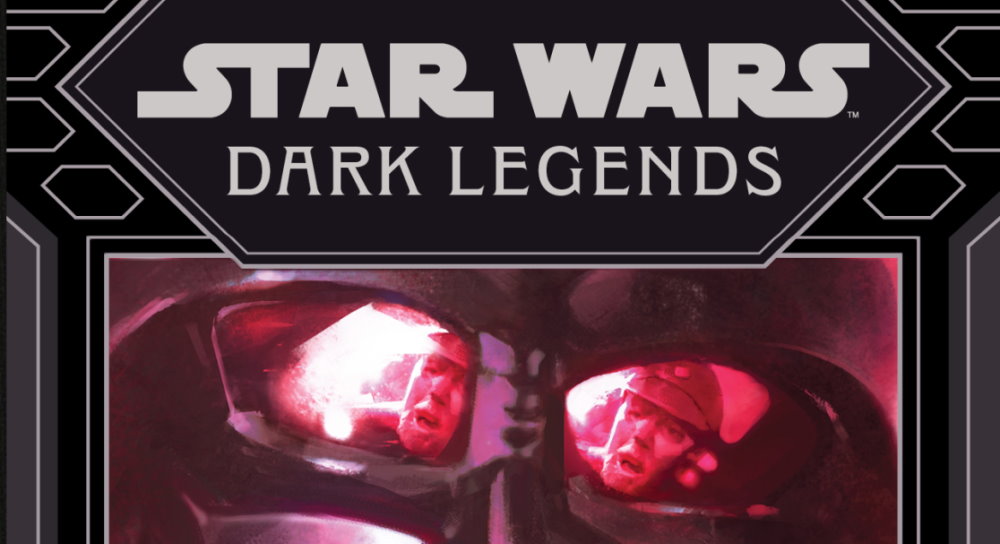 Read on if you dare! This unique in-world collection hallows the spooky tales and ghost stories that would have kept young Luke and Leia up at night.

Created by George Mann and Grant Griffin–the same team behind the stunning Star Wars: Myths & Fables–these six frightful fables have been carefully woven from the expansive fabric that is the Star Wars galaxy (including the thrilling landscape from Galaxy’s Edge at Disneyland and Disney World), and beautifully painted in a lush illustrative style that feels intergalactic yet innately archetypal and timeless.

Dark Legends is a new Disney-Lucasfilm Press junior novel, written by George Mann. It serves as a spiritual successor to Myths & Fables, Mann’s book from last year. Both books are compendiums of different myths and stories passed around in the Star Wars universe. This book takes a darker slant than its predecessor, focusing on spooky tales about monsters and curses and other evils from the Star Wars galaxy.

I enjoyed Myths & Fables enough for what it was, but I was a little hesitant when this one was announced because I was unsure whether the quality could be maintained with more and more stories. I’m surprised to say I enjoyed this one even more.

The book is both smaller and shorter than the last one but I preferred this format. Those aspects combined with other choices carried over from Myths (like the binding and serrated pages) give the book a very authentic feel. The shorter length is also fine by me, I prefer a focus on quality over quantity. 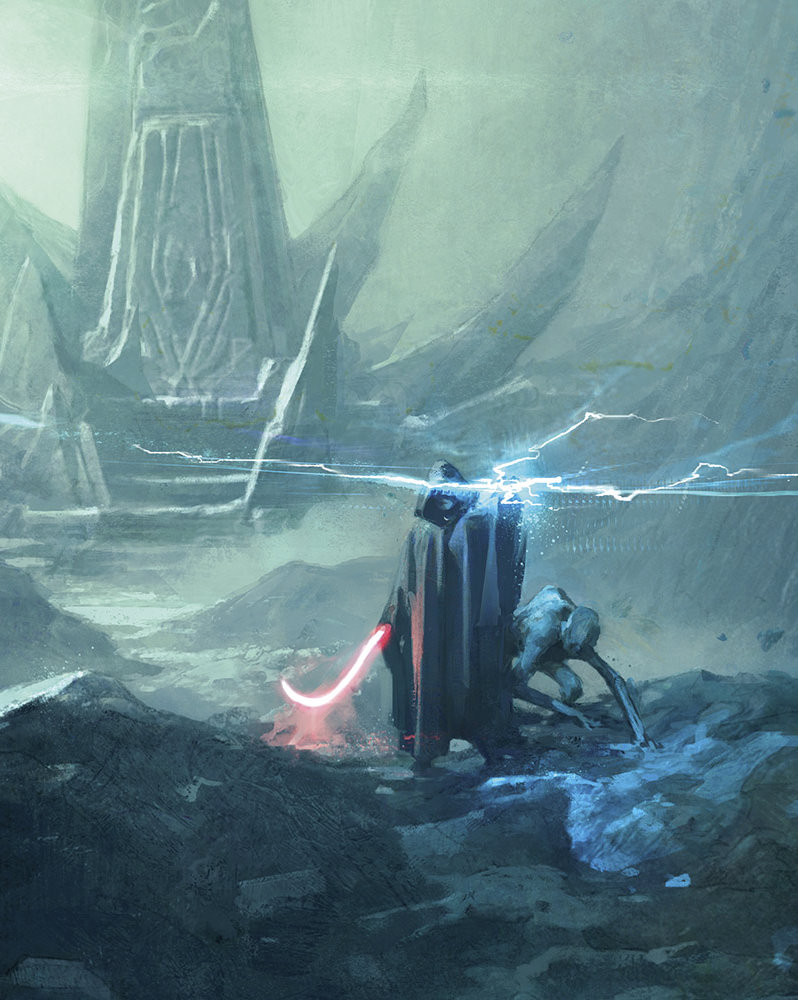 I was surprised by just how spooky they allowed these stories to be. At the recent Lucasfilm Publishing panel during SDCC, Mann talked about how he kept getting notes to make the stories darker and darker, and it definitely shows in the final book. It helps to sell the concept of the book; these being darker stories than in the last one doesn’t just feel like lip service, the stories are genuinely dark. And beyond just being dark, the scary aspect of each story is a preexisting or well-known aspect of the Star Wars universe, just with a darker lens put over it.

The first story in the book is a Nosferatu-like take on the Grand Inquisitor through the eyes of a young Force-sensitive girl in an orphanage. I thought this story worked especially well because of how natural it felt. The idea of the Grand Inquisitor stealing away children from their homes has been around just about as long as the Grand Inquisitor has. It’s a fitting choice for this book and the way the story plays out is exciting and engaging.

It’s followed by a story tied closely to Batuu and Dok-Ondar’s Den of Antiquities. Batuu was a key part of the last book and I’m not at all surprised that it got another story here. There are even plans to make a Galaxy’s Edge edition of Myths with a number of new stories, which I’m excited for. This story delves into the history behind one of the most striking items in Dok’s collection. It’s probably towards the bottom of my list for these stories but I do think it’s cool to get a backstory for the item, and I’m sure I’ll think about the story the next time I step into Dok’s.

Other stories in the book include a Wolfman story about the species that can be seen in the cantina (probably the spookiest of the book for me), a ghost story about the terror Darth Vader inflicts upon Imperial officers, and a Mr. Hyde-inspired tale about a Jedi on Coruscant. Another story serves as a semi-sequel to one of the stories in Myths, focused on the Nightsisters and Sith. It’s among my favorites, both for the chills and for how it expands on that previous story. 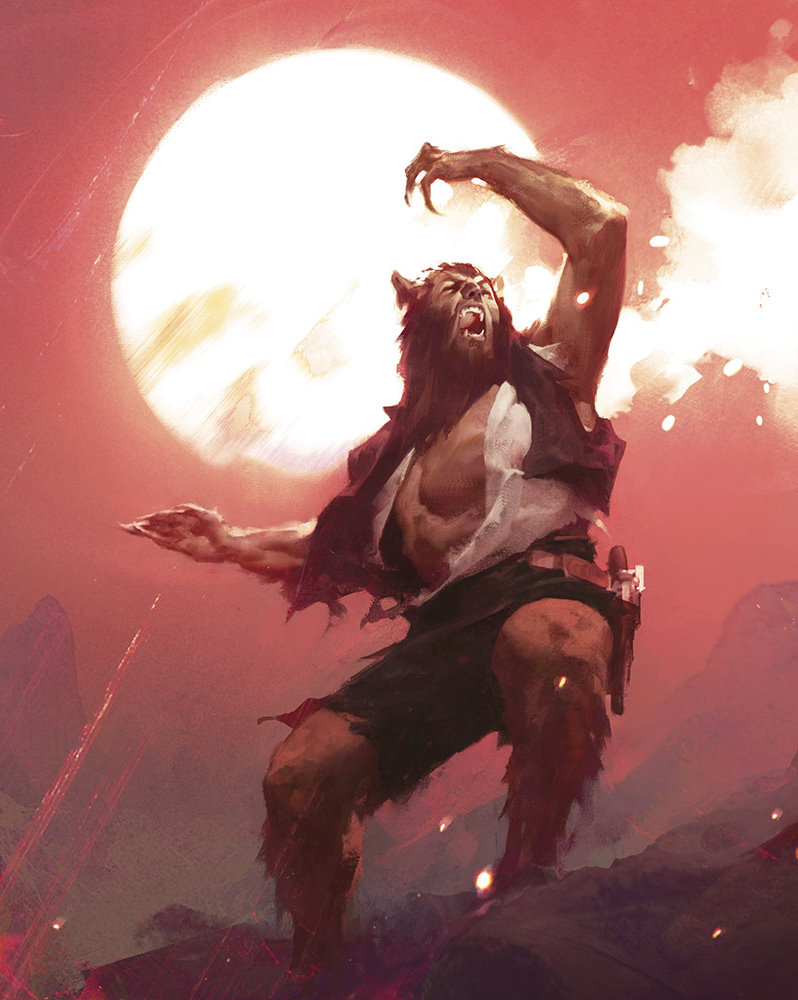 The final story is the one that’s probably going to get most of the attention: a tale set on the Sith world of Exegol. People hoping for answers for questions raised by The Rise of Skywalker probably shouldn’t look here; the Exegol setting felt mostly superficial. It’s cool that the story is set there, but there isn’t much lore given about the planet itself, the story could largely be set on any Sith planet. The story itself is as straightforwardly spooky and familiar as all of the others, telling about the life of a Sith who sought the secrets of immortality.

The artwork from Grant Griffin is an inextricable part of the book, going hand in hand with each story. From how Mann talks about the book’s development, I don’t think you could do these books the same way without both of them. Each piece gives a memorable and striking glimpse into the story it ties into.

Despite my initial hesitancy when the book was announced, I would be happy if they continued to make more books in this vein. The idea behind them has more potential than I initially gave it credit for, and I think they could easily make at least one more. I look forward to getting the Galaxy’s Edge edition of the previous book as soon as it is safe to do so.

Star Wars Dark Legends (Star Wars (Disney))
$12.24
Buy on Amazon This is a paid link. Learn More. Clicking the link may take you to the Amazon store servicing your country Price incl. tax, excl. shipping.  Details correct as at: 2021-06-16