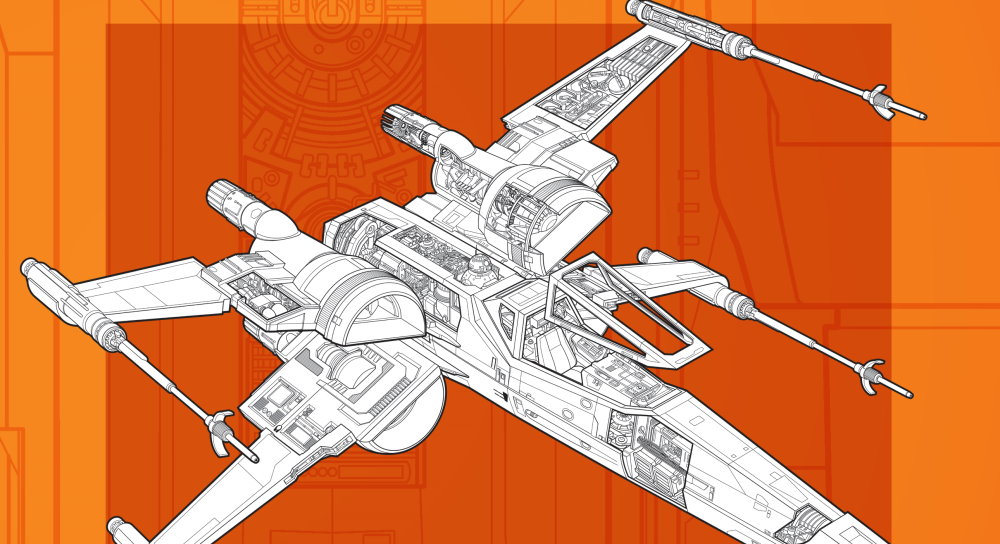 After the Clone Wars, the Galactic Empire spared no expense to build a massive  fleet of warships to enforce Imperial rule, intimidate defenseless worlds, and destroy all opposition.

However, the Imperial Navy underestimated Rebel Alliance fighter pilots, who flew X-wing, Y-wing, A-wing, U-wing and B-wing starfighters, and whatever else they could obtain to fight their Imperial enemies. Decades later, Resistance pilots would fly next-generation versions of Rebel starfighters against the First Order.

Fans who like to dive deep into the intricacies and details of the fictional creation of these amazing flying machines always look forward to the latest edition of the Haynes manuals, and this one is a doozy, casting its photoreceptors over Rebel (also New Republic and Resistance) Starfighters. That’s a lot of ground to cover, but as always Windham, Trevas and Reiff make a magnificent job of it.

As with the previous release looking at TIE Fighters and the vast array of different configurations that classic design has led to over the years, this collection lists the rag tag fleet of Rebel ships, including the venerable (and decidedly dangerous) Y-Wing, the devastatingly swift A-Wing, the design genius of the B-Wing, the iconic X-Wing and the workhorse U-Wing. We also delve into the Resistance fleet which includes new iterations of the X-Wing (T-70 right up to the New Republic’s T-85), the A-Wing and the Y-Wing. We also dip into some of the hangars they utilized and the differences in flight suits, and end the book with a very handy size comparison chart which makes the Corellian Corvette flying over the treetops from The Rise of Skywalker trailer seem even more impressive.

As a kid, it was this kind of information that really lit me up and kept me coming back to the GFFA. What’s more thrilling than a dogfight in space, or the reveal of a new Rebel or Imperial starfighter? Back in the day, when there were only a handful of different armours and fighters, a book like this would have blown our minds. Today, as the galaxy expands, the information and details builds along with it and as such, the ability to look closer at these vehicles – all standing on the shoulders of design cues set up by McQuarrie, Cantwell and Johnson – is available. It has to be said, while the format of the manuals is as attractive as ever, this book in particular is a joy to soak up. Rogue One blessed us with a pin sharp presentation of the A New Hope era vehicles, adding in capital ships like the Profundidty and the U-Wing, a gorgeous design very much informed by McQuarrie sketches (take a look at Buck Rogers fighter from the late 70’s TV show, designed by Ralph, and you’ll see what we mean.)

Flicking through there are some fascinating snippets of information to be found. The Y-Wing of the Galactic Civil war era had all its ablative armour removed to speed up access to its inner workings, replaced with energy shields instead, while the vessel had a variety of configurations allowing for gunners facing either direction or system changes to make the Y-Wing an excellent long-range courier ship. The A-Wing – a direct successor to the Deltas-7 Aethersprite Jedi Starfighter – often ran at the rear of Rebel fleets, to lull the enemy into thinking these small snub fighters were slower than they actually were. Also, A-Wings didn’t have astromechs to take care of navigation, astrogation, or ship board systems and as such were a beast to fly.

The B-Wing has an even more unusual origin, with design cues coming from unlikely sources. The T-6 shuttle and its rotating wing alignment and the V-19 Torrent were both predecessors to the Blade Wing, designed by Quarrie, a Mon Calamarian based on the planet Shantipole (remember that WEG fans?) That vessel was tested by Hera Syndulla and became the basis of the A/SF-01 B-Wing which was instrumental in the Battle of Endor.

Long-time fans will remember the Z-95 Headhunter from the original Brian Daley Han Solo trilogy and it’s that vessel that informed the design of the X-Wing. Taking the basic silhouette and adding in the split wing options given by the Republics ARC-170 starfighter, the T-65B X-Wing was born, becoming the backbone of the fleet in its battle against the Empire.

I could talk all day about the vessels in this book, and gaze lovingly at the pictures, but I won’t. I will insist you go out and grab a copy of this manual for yourselves, because apart from being an attractive book to have on your shelves, this has some invaluable information within and is a joy to read. Well done to all involved, and please, keep them coming.