News of the New Republic’s victory still reverberates through the galaxy. In its wake, the capital ships of the newly legitimized galactic government journey to the farthest stars, seeking out and crushing the remnants of imperial tyranny. But some old ghosts are harder to banish than others. And none are more dangerous than Shadow Wing.

Yrica Quell’s ragtag Alphabet Squadron still leads the search for Shadow Wing, but they’re no closer to their goal—and the pressure to find their quarry before it’s too late has begun to shake them apart. Determined to finish the fight once and for all, Quell works with New Republic Intelligence’s contentious Caern Adan and the legendary General Hera Syndulla to prepare the riskiest gambit of her starfighting career—a trap for Shadow Wing that could finish the chase once and for all.

But in the darkness, their enemy has evolved. Soran Keize, last of the Imperial aces, has stepped into the power vacuum at the head of Shadow Wing, reinvigorating the faltering unit in their hour of need. Once adrift in the aftershocks of the war, Keize has found meaning again, leading the lost soldiers of his unit through to safety. The only thing standing in his way? The most mismatched squadron in the New Republic Navy, led by his former mentee: the traitor Yrica Quell.

Not only in her skills as a purple-skinned B-wing fighter pilot within Alphabet Squadron, but also through her non-stop playlists cranking through her cockpit when on a mission. Chass’ love of music and playing DJ to her own soundtrack—maybe the only thing she could truly control in battle—completely drew me to her as a story lead.

And for “Shadow Fall,” the second installment in the Alphabet Squadron trilogy, the change-up in music—from “Loletian politi-folk,” to a “cryptosymphonic house jam using old Corellian folk tune as a bass line”—keeps time for the change in pace, tenacity, and levels of desperation in yet another rich story from author Alexander Freed.

Freed utilizes his Theelin pilot to help crank up the volume in so many ways while unleashing the organized chaos of characters, locations, and battles—in space, in atmosphere, and on the ground—in the second story of a diverse group of five pilots in different style ships representing the New Republic shortly after the Battle of Endor.

She is once again joined by squadron leader Yrica Quell (X-wing), Kairos (U-wing), Wyl Lark (A-wing), and Nath Tensent (Y-wing), as disparate backgrounds co-exist in order to extinguish the threat of the fallen Empire’s 204th squadron, better known as Shadow Wing. The stories from both sides of the battle intersect somewhere between the intensity and glamour of “Top Gun” and the raw, grit, sacrifice, and trench warfare of Rogue One as revelations and surprises appear like a ship out of hyperspace. 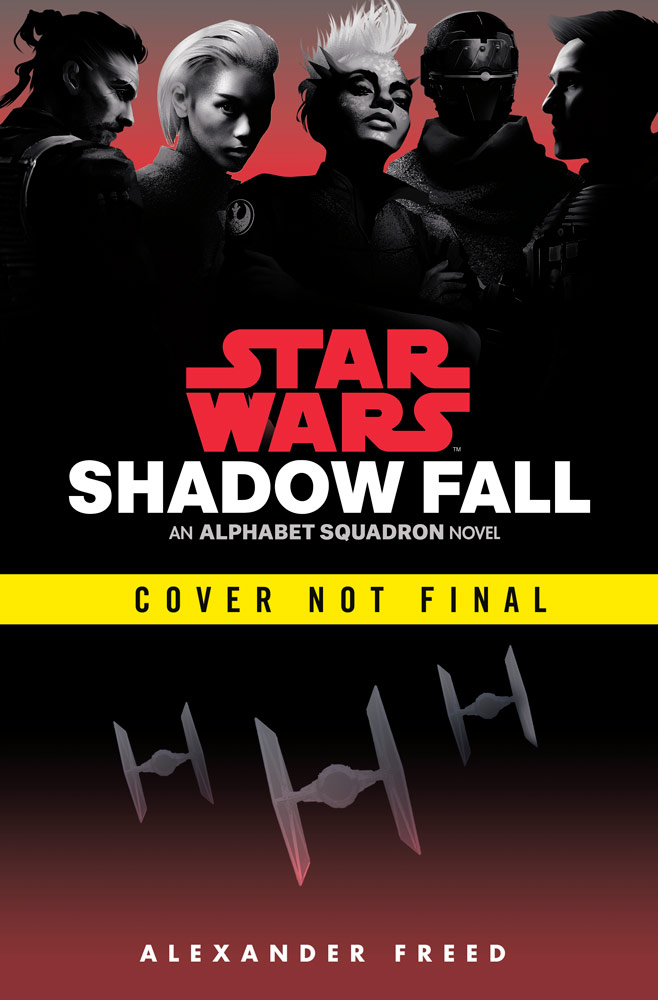 The brilliance of Freed’s storytelling is that the novel could be the individual story of any number of the pilots. However, I’ll take the lead of the hardback cover and lavender spine of the book and focus on Chass, the punk-rock pilot seemingly longing for a glorious death after an emotionally crippling past.

Though she and Alphabet Squadron earn the trust of General Hera Syndulla (yeah, reason enough to read the book right there), this story is more about each pilot trusting themself and figuring out who they are and what they should be after so much loss in a dangerous job and unstable time.

We take a journey with Chass that rotates at full speed like the gyroscopic machinations of the B-wing around her cockpit—the control center of power, speed, and destruction that is exemplified by Freed’s description of the six-horned, turquoise-mohawked pilot with an edge and thirst for intoxicants:

“She sang as she fired, let the music dictate the rhythm of the violence, and adjusted her vector so that she could batter the asteroid as she passed.”

With a history that includes Jyn Erso, religious cults, losing too many friends in space battles, being stranded alone in space, and strong personal and emotional barriers, Chass’ journey alone is worth the price of admission.

And then there’s the leader of the Children of the Sun’s final words to her and the decision of Quell, which Chass won’t learn about until the final installment of the Alphabet Squadron series to truly set the stage for an epic conclusion.

The encore of this written act will be amazing, but has a ton to live up to—and that’s only through a review focusing on one of the five primary pilots.