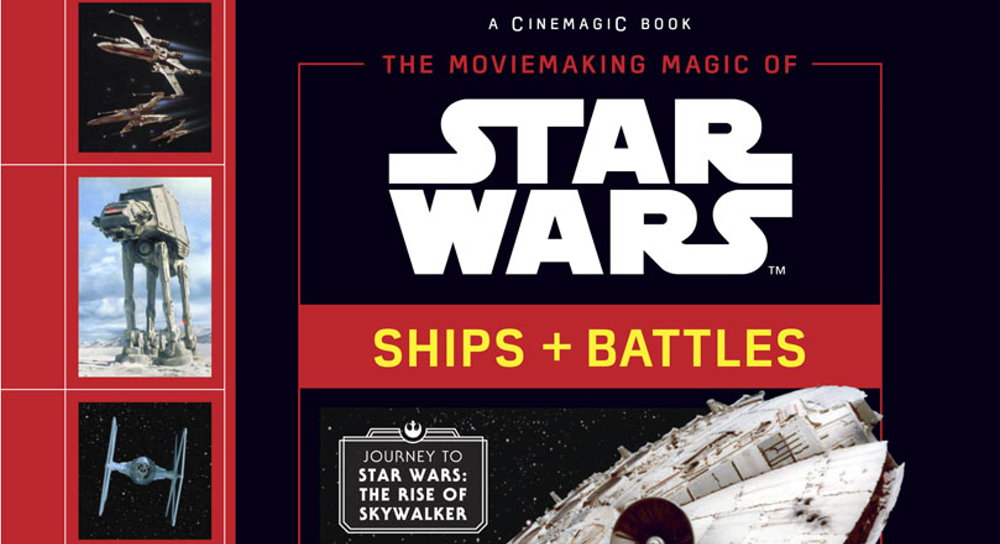 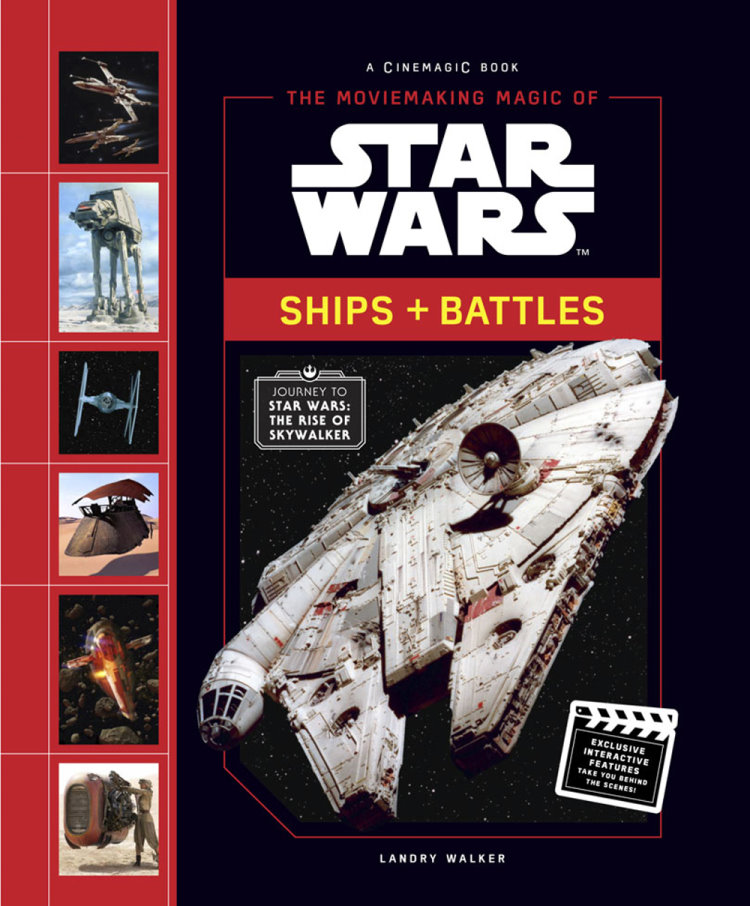 The Moviemaking Magic of Star Wars: Ships and Battles

Go behind the scenes of the biggest movie franchise of all time in this immersive and interactive book to see how the most iconic vehicles in the galaxy—from the Millennium Falcon to X-Wings and TIE fighters to AT-ATs and the Death Star—were created and used in the films of the Star Wars saga. This collectible book includes special interactive elements, including six-page booklets, accordion folds, and flaps that reveal the magic behind the movies with concept sketches, molds, digital imagery and more! Plus, get a sneak peak at some of the vehicles from Star Wars: The Rise of Skywalker!

In the years – the decades – since the very first starship flew high over Tatooine, chased by an impossibly huge, mile-long Imperial Star Destroyer, we’ve been obsessed with the vehicles of Star Wars. The Tantive IV, TIE Fighters, X-Wings, landspeeders, the Millennium Falcon….fans fell in love with those original vessels, not only in their onscreen GFFA environments but their real-world creation. Star Wars fans were among the first film fans to dive deep into the magic behind the movies, learning about ILM, the creative minds behind the concepts and designs of the ships as well as the craftsmen and women who brought those ideas from sketches to physical, 3D reality. Knowing there’s an audience for this knowledge, and buoyed by the success of the first book in the series The Moviemaking Magic of Star Wars: Creatures and Aliens, Abrams bring us The Moviemaking Magic of Star Wars: Ships and Battles, a closer look at those magnificent flying machines.

A satisfyingly hefty tome, Ships and Battles takes us through the saga episode by episode, unveiling the armada of Star Wars not only in release order but reveal order. As such, the book kicks off with the Tantive IV, the very first vehicle seen onscreen in A New Hope, informing us of the ships name (remember kids, it’s Tan-ti-veeee), copy about its history, concept sketches, a Force Fact and the method the vessel was brought to the screen.

That’s not all. If this were a classic informational book it would be enough – the design is crisp, clean and pleasing on the eye with pre-production sketches and behind the scenes images littering the pages – but The Moviemaking Magic of Star Wars: Ships and Battles has another ace up its sleeve. Each ship has a mini file, pages showing the ship onscreen, it’s model being shot or on set images or sketches, making an already pleasurable read a more interactive journey.

It really is a fun read as we move through the events of the original 1977 film, and there are rarely seen images to accompany the information. The Escape Pods page shows us the making of the model, shots from the film itself as well as images of Stormtroopers next to the location model while the landspeeder highlights the original Colin Cantwell design (similar colour, very different circular design). 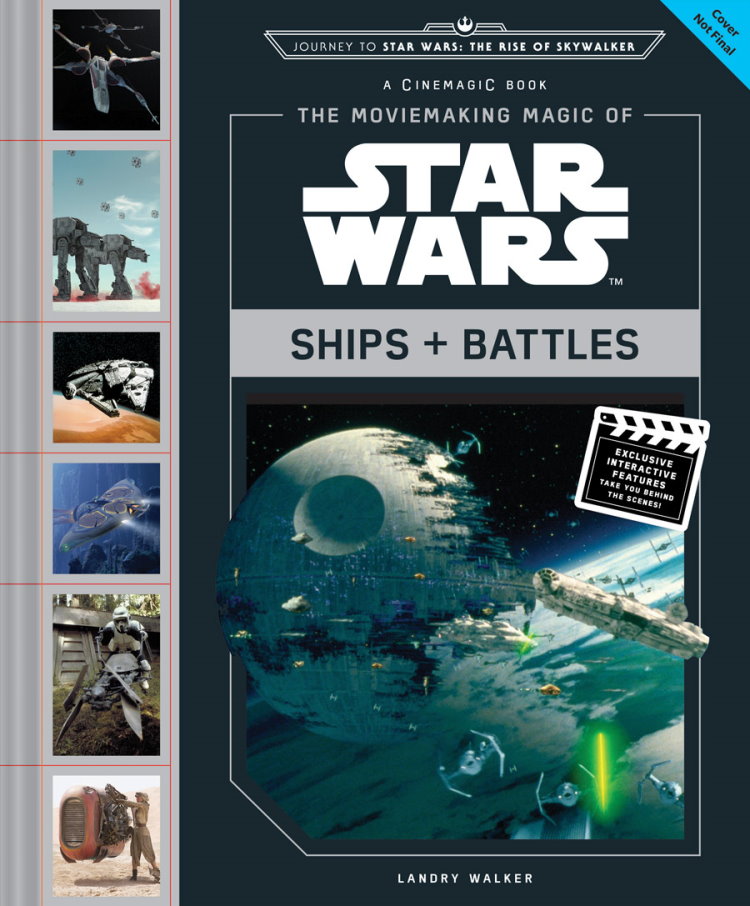 All through the book, the modelmakers of ILM are heavily featured, with fascinating images of the ships being filmed prevalent throughout, and the method of the ships onscreen appearances are detailed. Some are scratch models, some kitbashed. Some, like the X-Wing, landspeeder and Millennium Falcon were full-size sets.

We’re also treated to in-depth looks at certain scenes in Bringing The Action To Life and technologies. The Dykstraflex gets a full page, the computer controlled camera rig that filmed the descent into the Death Star trench and as the book moves into The Empire Strikes Back and beyond, so the technology required to bring George Lucas’s saga to the screen develops. While there are occasional oversights – the use of the original trilogy’s beautiful matte paintings are passed over – this lays the creation of these ships into a pleasing chronology as the technical developments progress.

A look at the CGI of the Special Editions eases us into the Prequel Trilogy era, a time when the popular perception was that everything onscreen was swathed in green and while indeed many of the sets and locations were created in a computer, using technology to place live action characters in those fantastic environments, The Phantom Menace produced more physical models than the entire Original Trilogy combined and while Revenge of the Sith is mostly skimmed past (no tri-fighter, Theta-class shuttle, A6 Juggernaut, AT-AP or swamp speeder) there’s plenty to dig into in the Sequel Trilogy.

Rey’s speeder, a practical on set vehicle that could race across the sands of Jakku at a fair clip as well as a CGI model and on to Rogue One and it’s classic styled mix of vehicles that sat so perfectly with the ships of A New Hope, including the Death Star which was created entirely in CGI.

It’s also notable that The Last Jedi relied entirely on CGI and full-size sets while the pre-OT era Solo mixed in scale models and while there’s nothing on The Rise of Skywalker other than a pair of pre-production sketches and two images (expanded and updated edition to follow in 2022 no doubt) this is a book that fans of the saga with a modicum of interest its creation need to have on their shelves.

The Moviemaking Magic of Star Wars: Ships & Battles
$13.39
Buy on Amazon This is a paid link. Learn More. Clicking the link may take you to the Amazon store servicing your country Price incl. tax, excl. shipping.  Details correct as at: 2021-01-25