WAR OF THE BOUNTY HUNTERS PRELUDE:

The Hunt for Han Solo

The Rebel fleet awaits word from their missing comrades—Shara Bey, lost on Starlight Squadron’s first mission, and Han Solo, frozen in carbonite and in the hands of the infamous bounty hunter Boba Fett.

A friendly signal from the Imperial Star Destroyer Tarkin’s Will reaches the Redemption in the middle of the night. Shara is alive, hiding in the depths of the ship and gleaning information about the Imperial systems.

But the Rebellion still seeks Boba Fett and his cargo….

After the explosive start to War of the Bounty Hunters in the Alpha issue, the storyline heads out into the regular monthly titles for the preludes, arriving first at #13 of Star Wars as we join Luke Skywalker training alone in an octagonal room, a troop of training remotes hovering above him. We’re in that pivotal stretch between Empire and Jedi, where Luke’s absense from Dagobah after a few short weeks of training see him blossom into a Jedi worthy of taking on the Emperor and his father Darth Vader. Without any one-on-one training, it would appear to be an echo of Rey’s untrained awakening in The Force Awakens, as he figures out the ways of the Force, leaning on the lessons he clearly studied closely with his master, but that’s interrupted as Artoo and Threepio arrive with a message regarding the abandoned Jedi temple on Elphrona, a world recently seen in Light of the Jedi and later down the timeline in The Rise of Kylo Ren. However, that message is cut short by Chewbacca as he steps in to tell Luke – via Threepio – that a contact on Nar Shaddaa has spotted Boba Fett, and so off they jump to the smugglers moon where they’re recieved by Sagwa, the wookiee who helped Han, Chewie, Qi’ra, Beckett, L3 and Lando escape from Kessel during the events of Solo: A Star Wars Story.

We quickly get to meet the ‘supporting cast’ of Alpha as the Pa’lowick ticketmaster and the heavies from Kanji arrive and lead us into an unneccesary fight and chase through the streets of Nar Shaddaa, back to the Millennium Falcon where the gang, including Sagwa who plans on throwing his lot in with the Rebellion, board the freigher and blast off to return to the fleet to follow up another lead on the whereabouts of Han Solo.

Issue 13 is frustrating for what is such an early entry in the War of the Bounty Hunters storyline. Ignoring an editorial oversight (Luke found his yellow-bladed lightsaber on Tempes back in Star Wars issue 6, not Elphrona, so it would be reasonable to assume Soule got his High Republic and War of the Bounty Hunters notes mixed up at some juncture and editorial didn’t pick up on the mistake) the story goes nowhere. The gang arrive on Nar Shadaa, make the logical assumption that Jango (Fett’s black armoured alter ego in Alpha) is indeed Boba, get chased off the moon and then return to the fleet, learning precisely nothing and achieving little other than adding the skills of Sagwa to the Rebel cause before preparing to chase another lead. They just had a lead, a sighting of the man who left Cloud City with coffee table Han Solo; what lead could be better than that? 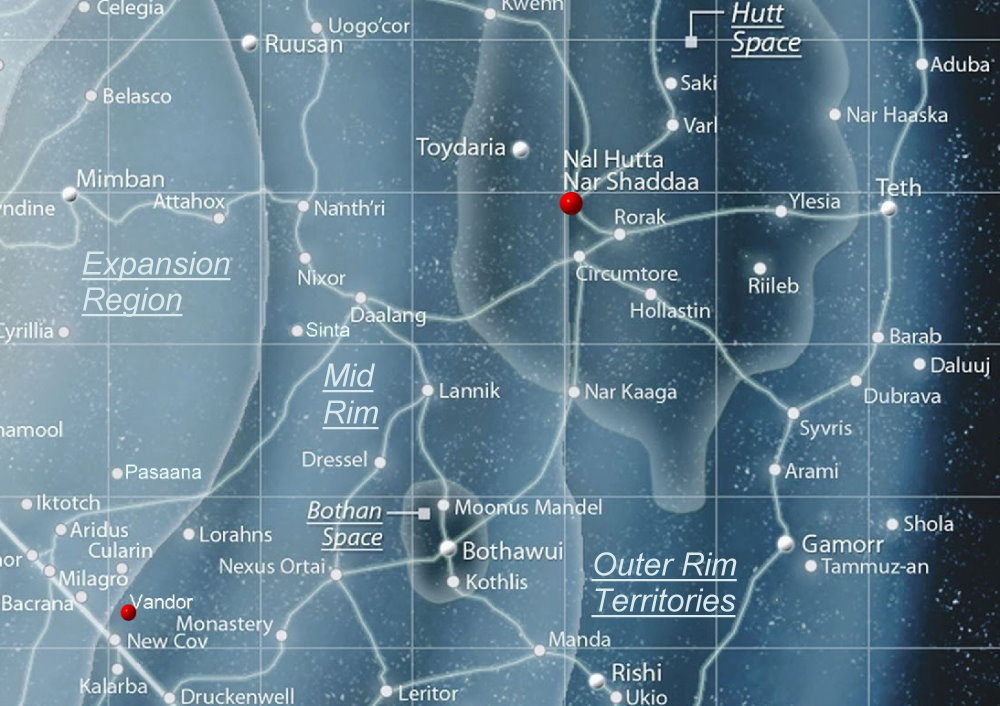 A geographical gripe; this issues mostly takes place on Nar Shaddaa, deep in Hutt Space on the eastern side of the galaxy on the border of the Mid Rim and the Outer Rim Territories, so why would the Kanji goons contact the Imperial garrison on Vandor, far to the south-west near to the Correllian Run on the edge of the Expansion Region? There’s likely an easily-explainable reason why they’d do that, but with Nar Kanji a Hutt colony in the Outer Rim, the story taking place in Hutt Space and the Empire being as far spread across the galaxy as they’ve likely ever been at this point while chasing down the Rebellion, a call so far distant to an Imperial Garrison on the periphery of the Expansion makes little sense.

There’s also the matter of Artoo revealing information about Jedi outposts spread across the galaxy that he downloaded from the Death Star three years previously. The High Republic is doing a grand job of laying out just how far-reaching Jedi outposts were two centuries before, but has Artoo been silently decoding this information for three years? Did he forget he had it? Why is he only coming to Luke with this now? It’s perfectly logical for the astromech to have scooped up all kinds of information when he accessed the Imperial network in A New Hope, but to reveal this now out of the blue makes little sense, other than filling a gap in the plot.

As stated before, Luke has a lot of remote learning to do between Empire and Jedi, and this reveal appears to feed into that, but it could have been more elegantly revealed. That said, with War of the Bounty Hunters promising to ‘redefine this period of the Star Wars mythos‘ and filling in that legendary journey of Fett from Bespin to Tatooine with all kinds of left and right turns and The High Republic delivering galactic history in books and comics, it’s little surprise that there’s no longer the time to refine such plot points. Right now it’s full speed ahead, and despite the read-it-once, bag-board-and-box-it nature of this issue it’s handsomely drawn by Ramon Rosanas and as always Soule captures the characters well, especially Threepio who can be a tricky one to voice.

Sagwa is a welcome addition that will hopefully lead somewhere interesting, and a special shout out to colourist Rachelle Rosengerg. In just the same way that the lighting on shows like The Bad Batch elevates the viewing experience, so good colours do the same in a comic and once again she displays excellent judgement. Far from the hue-drenched pages of The High Republic, this shows Nar Shaddaa as the shadowy, murky hive of trouble that it is. Not as grim and dangerous as the first time we saw it way back in Dark Empire, it’s clear that the smuggler’s moon is no place to visit for a vacation.