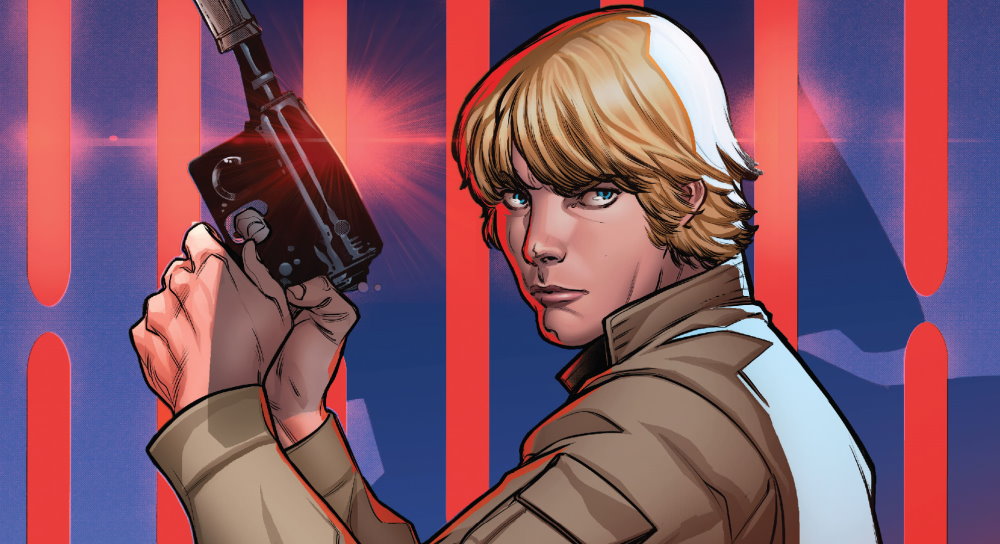 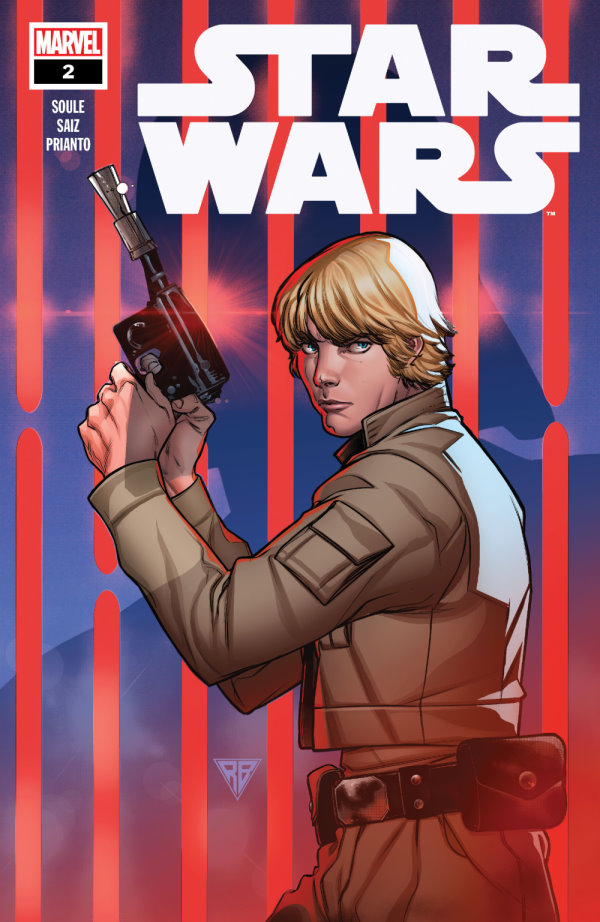 The Rebel fleet has been scattered following the Battle of Hoth. After losing Han Solo to Darth Vader’s bounty hunter, Princess Leia Organa, Luke Skywalker and Lando Calrissian returned from Cloud City aboard the ”Millennium Falcon” to find a rebel fleet under attack.

But Leia’s daring plan allowing the fleet to escape. In the battle, a wounded Luke tapped deep into the Force to destroy an entire squadron of enemy fighters.

And after learning that Darth Vader is his father, Luke now questions his destiny as a Jedi….

We’re on very familiar ground with this issue of Star Wars, and there’s a good reason why. In the year of the 40th anniversary, a good chunk of this issue takes place during the events of The Empire Strikes Back which, with a bit of logical thought, makes sense. As the issue opens, Luke is still one-handed, and as Lando and Chewie take the Falcon to Tatooine to check whether or not Han Solo has been delivered to Jabba by Boba Fett we not only see Landos famously quick mind at work, but also his bargaining skills as he gets an audience with Jabba the Hutt and fistbumps Amanaman.

It makes sense in one respect; playing for time to give the Alliance the chance to get the fleet so far out of the galaxy they can look down upon it at the end of the film, but in another way defangs their eventual trip to Tatooine a year later. Entering the court of Jabba the Hutt is a huge deal, and no doubt Jabba’s spies and agents are everywhere but having Lando chance his way in for an audience, get caught out and then huckster his way out again doesn’t quite ring true. The galaxy has shrunk tremendously in recent years, hyperdrive seemingly able to take people from one side of the galaxy to the other and back again in mere hours, but the journey Boba Fett took to Jabba was always played to be a tactical game of cat and mouse during those Empire to Jedi days and especially during the Shadows of the Empire era. This side trip, just days after Lando lost Cloud City but before he heads off with Chewie at the end of the film when Luke’s hand has been replaced feels superfluous…BUT it is neatly done and doesn’t contradict what we know.

Empire always felt like it took place over a long period of time, perhaps the longest stretch of time within a Star Wars film so far (the time jumps in Rogue One and Solo notwithstanding) and there are gaps in the flow of the story to drop in other elements. Soule takes good advantage of this one; shame that it’s to go to the planet that felt like the end stop on a long, hard journey in Jedi. That said, it’s a lush issue to look at and very much feels in keeping with the era. Lando is slowly gaining Leia’s trust, and knows how to ‘be’ around Chewie, even when occasionally putting his foot in it with misplaced choice of words, and Jabba’s palace looks as dank and dangerous as ever. The shoehorning in of Poe Dameron’s parents may seem a tad forced, but think back 20 years when the prequels were here and the worlds and characters of those films were eased into the wider chronology – it has to be slotted in some way.

Whichever way you cut it, it’s good to see Chewie and Lando in charge of the Falcon, a duo that takes us back to the ’80 – 83′ era of Marvel comics as the hunt for Han Solo took Lando, Chewie, Luke, Leia and the droids across the galaxy in search of their lost friend as they evaded the clutches of the Empire. That era was among the very best in Star Wars comics history (stay tuned for our Empire40 interview with Walt Simonson coming to the site very soon), and if Soule and co aim high then there’s always the hope that those heady days of almost 40 years ago can be matched.