Queen Trios of Shu-Torun’s betrayal has left the heroic Rebel Alliance of the evil Galactic Empire!  Luke Skywalker, Leia Organa, and Han Solo have been on the run ever since and barely one step ahead of the Empire’s agents.

After running into an Imperial patrol, Luke, Leia, Han, and the droids R2-D2 and C-3P0 fled smuggler Sana Starros’ ship in an escape pod and crashed on the hidden moon of Hubin.

The rebels have only been saved from an attack of the monstrous beasts native to the moon thanks to the arrival of Hubin’s mysterious inhabitants.  But are their new hosts friend or foe…

The second chapter of “The Escape” arc picks up with the heroes being waited on hand and foot at their mysterious host’s mansion.  Han Solo quickly indulges the opportunity to enjoy the gracious comforts while Luke and Leia remain cautious.

The identity of their overly hospitable host is revealed as Thane Markona, but he portions out his background in bits and pieces.  This furthers Luke and Leia’s suspicions and they are exasperated to learn they are stranded on the moon due Markona’s isolated existence.  Luke quickly changes his tune upon meeting Markona’s daughter Tula and becomes a bit more comfortable with the circumstances.

Thane Markona reveals the motivation behind the isolation of his community from the rest of the galaxy and Tula provides a tour of the community.  She details the philosophy of the hard-working clan allowing Han and Leia to explore on their own.  While Thane Markona invites Luke on a tour of their own.  They are interrupted to defend Markona’s citizens attack by the moon’s indigenous predator, the Thanrax. 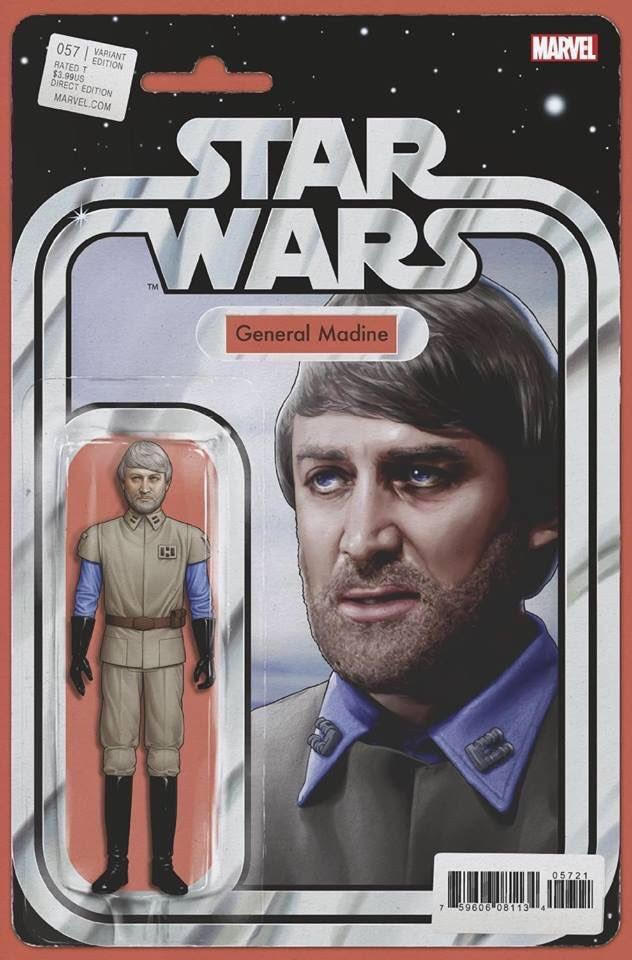 Coming out of Kieron Gillen’s “Hope Dies” arc, I had really high expectations for the current storyline.  We learn a little about Thane Markano, but we still get the impression there is something sinister lurking just below the paradise.  The issue provides a little information but no action.  The story is turning reminiscent of a common Star Trek plot, but I am going to remain optimistic there are some surprising tricks up Mr. Gillen’s sleeve.

The artwork remains constant with the exceptional Angel Unzueta and creative team.  I hate to admit that I was a bit pique with the Jamal Campbell’s cover featuring a parody of “American Gothic”.  Although I understand the theme, I just like to keep my Star Wars in a galaxy far, far, away…  This personal foible does not infer the quality of the cover art is subpar.  In fact, it is of Jamal Campbell’s work is some of the finest out there.

The issue is a bridge to allow the story to move forward.  Those apprehensive characters are given to time to feel out the situation and they begin to accept it.  Mr. Gillen has cleverly passed the mystery surrounding Thane Markano and his followers over, at least temporarily, to the imagination of the reader.

Star Wars Vol. 10: The Escape
$41.79
Buy on Amazon This is a paid link. Learn More. Clicking the link may take you to the Amazon store servicing your country Price incl. tax, excl. shipping.  Details correct as at: 2021-06-24