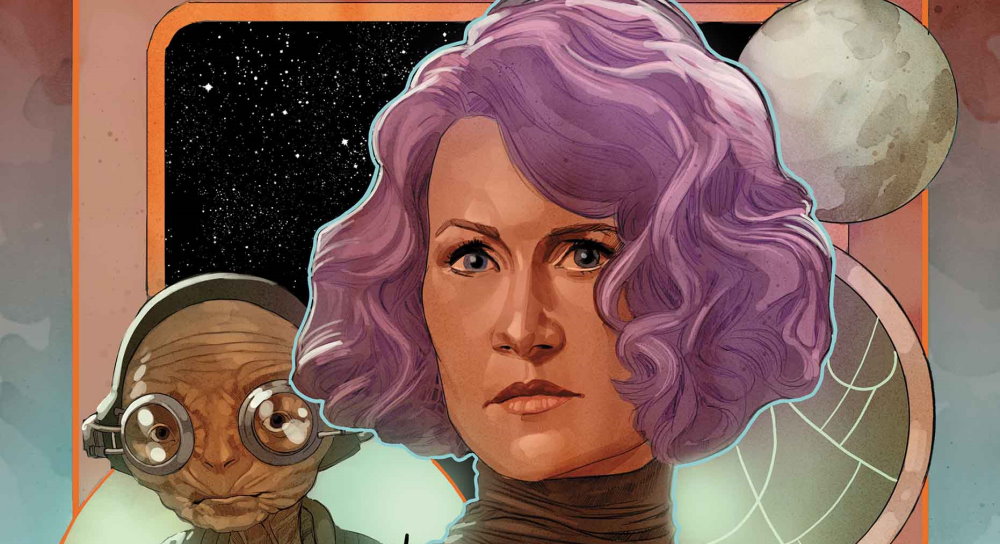 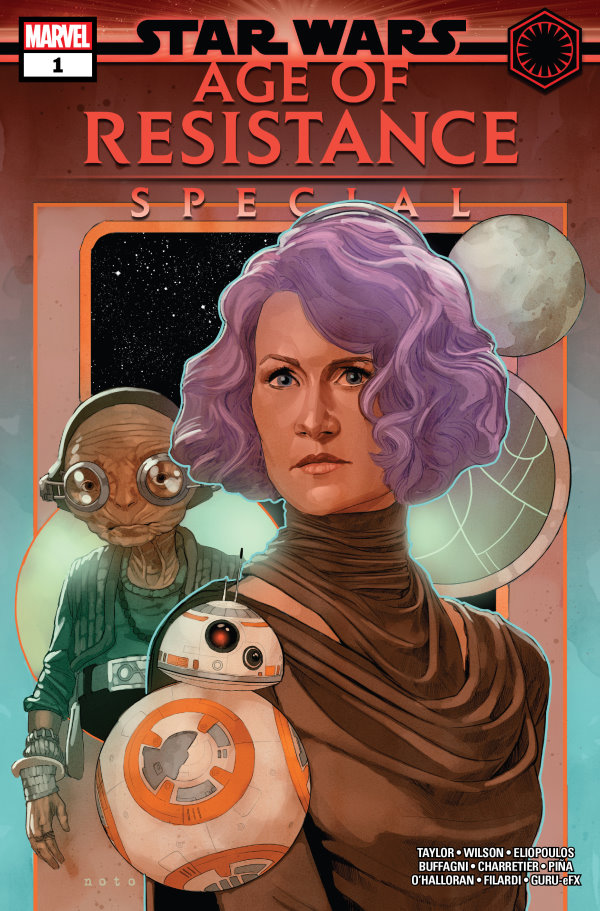 A ONE-SHOT SPECIAL FEATURING YOUR FAVORITE CHARACTERS FROM THE NEW STAR WARS TRILOGY! Star Wars fans first met Resistance leader and confidante of Leia Organa VICE ADMIRAL AMILYN HOLDO at the end of her story in 2017’s The Last Jedi—now, witness her triumphant beginning! This July, Hugo Award–winning writer G. Willow Wilson (MS. MARVEL) explores a pivotal conflict in Holdo’s early career that will start the young woman down the path to heroic infamy for the rebellion! With her ship at the mercy of a dangerous enemy, it’s up to Holdo to outsmart their foe and win the confidence of her compatriots in the process. With art by Elsa Charratier! [sic] The infamous “pirate queen” of Takodana, MAZ KANATA, thought she’d seen everything in her thousand-plus years of running a bar and hiring smugglers. But it turns out that the criminal underworld is always full of new surprises…especially when she hires HAN SOLO and CHEWBACCA for a job! Story by Tom Taylor (AGE OF RESISTANCE)! And Poe Dameron’s loyal companion, the astromech droid BB-8, just can’t seem to stay out of trouble. His missions always seem to escalate into a full-blown adventures! And if it means a win for his friends and the heroic Resistance freedom-fighters the little droid will stop at nothing to get the job done! Story by CHRIS ELIOPOULOS!

Generally, Specials like the Age of Resistance special are patchy affairs, with one story shining above the others and there’s no break from the formula here, with the opening story Maz’s Scoundrels being a particularly strong opener.

Written by Tom Taylor and drawn exquisitely by Matteo Buffagni and coloured by Chris O’Halloran, this sees Han. Chewie and Maz Kanata head from the Unknown Regions in the Millennium Falcon for an unnamed ice planet where an enemy of Maz is holed up. He – Baron Somareeva – has something she needs and Han and Chewie are the perfect duo to help her. The concept is basic and straightforward, but the execution works a charm, solidifying the bonds between the Falcon crew and the pirate queen, and making very clear just how much Maz thinks of Chewie.

It also focuses on Maz’s quest for sith artifacts, taking items away from the dark side and making you wonder what else she had in the bowels of her Takodana castle. It’s pacey, charming, funny (MAZ TO SOLO: “You run away better than anyone I’ve ever known.” “I’m…gonna take that as a compliment.”) and fits into what we know of their relationship like a glove. More of this trio would be most welcome.

That’s followed by The Bridge, focusing on Amilyn Holdo. Drawn by Elsa Charretier and written by G. Willow Wilson, this sees Holdo – at this point a minister – pull off a bold maneuver that sees her cache elevated and her reputation cemented.

There’s no doubt it kicks off in an odd way, as Holdo – with blond hair – holds a snapping Venus Fly Trap type plant in her hands before we return to the room, a dead plant and Holdo with her familiar Mrs Slocombe hair. All fashion decisions aside, we also see why Holdo was held in such high esteem by Leia as she takes control of their Blockade Runner after being caught in a tractor beam by an ISD and manages to blast a hole through the weakest point (shooting right through the docking bay) and blasting through the other side. 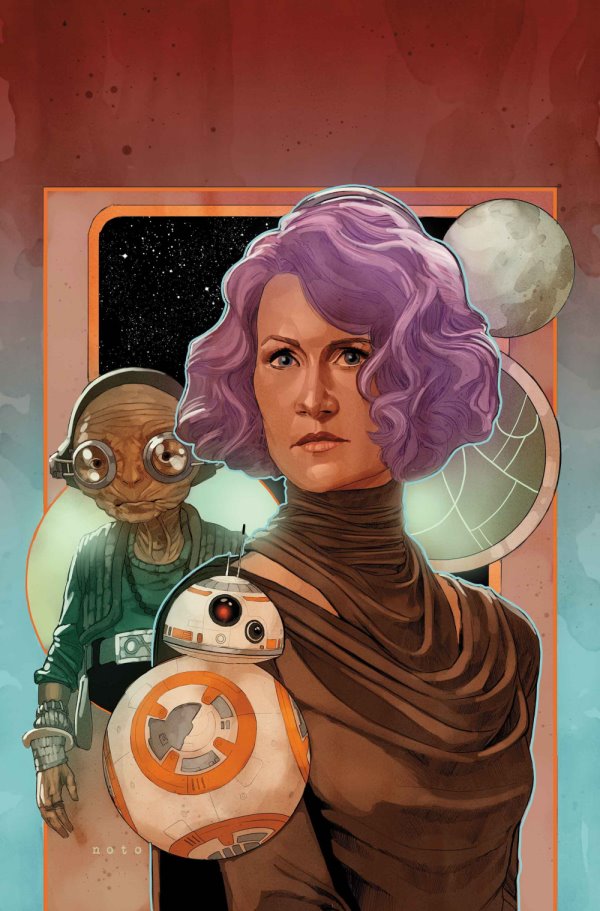 It makes sense – more than her final move in The Last Jedi – and shows how bold and three steps ahead of the board she was. Taking control of the ship doesn’t go unnoticed and as she is promoted to Captain it’s easy to see how fast she would have risen up the command ladder. Another enjoyable entry in this special edition.

Next we have Robot Resistance, written by Chris Eliopoulos and drawn by Javier Pina which sees poe Dameron on the world of J’hosh in the Fla’Nagan system along with his partner and buddy BB-8. They’re there to infiltrate the First Order base and it’s imperative that they not be spotted, a plan that goes well until BB-8 sees some droids being bullied by a First Order officer. A problem, but it’s BB-8 and of course he Swiss Army Knives his way out of the situation by getting the droids onside, destroying the base and bringing the droids back.

All in all a cracking special that adds depth to some relationships (the Maz, Chewie and Han story), characters (Holdo’s adventure) and some straight up old fashioned fun.