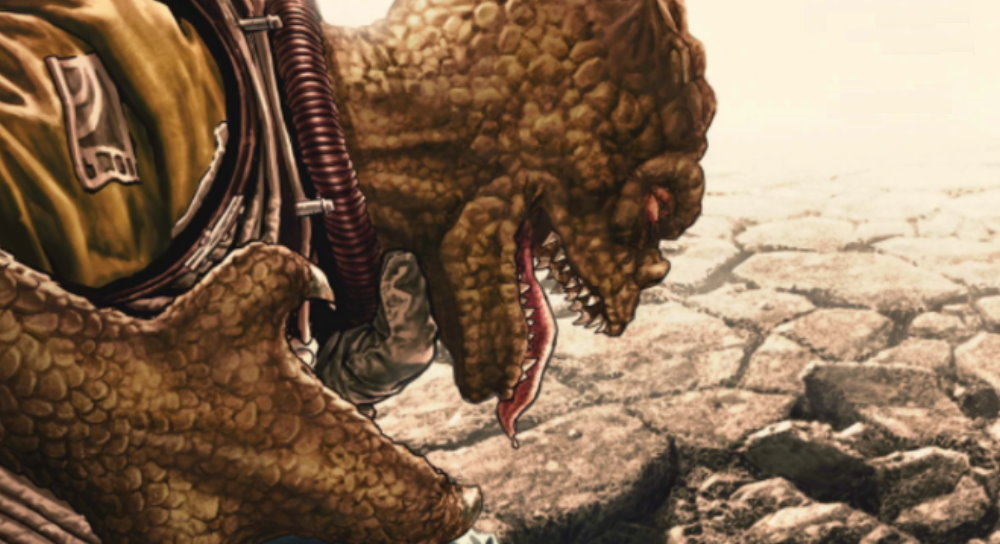 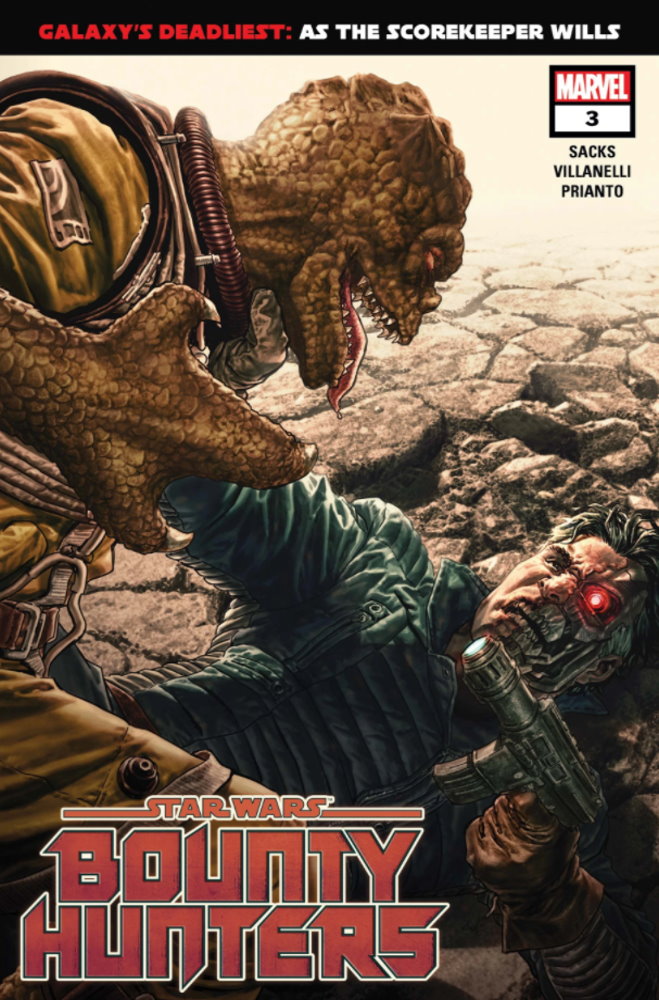 Years later, Lash re-emerged, and the price on her head has attracted hordes of hunters—including the remains of her old crew: the Trandoshan Bossk, Boba Fett, the human T’onga, whose brother T’ongor died as a result of Lash’s actions, and her cyborg protégé Valance, who found coordinates Lash hid at the grave site of her parents.

Valance’s droid now has Lash’s location…and Valance’s ex-teammate Bossk isn’t above killing him to get it!

In the modern era of Star Wars, a series like Bounty Hunters – unapologetically brutal, down-and-dirty and reeking of the 90’s – may appear to stand out like a sore thumb on a trandoshan, but when you dig a little deeper into the characters this series is based around – people like Valance, Bossk, Boba Fett and the like – then it becomes quickly apparent that a more socially conscious presentation wouldn’t be doing these dangerous, vicious characters justice. A harsh, smashmouth approach works best for this series, and issue three continues in that vein as we return to the graveyard planet of Galmerah as the bounty hunter Ooris arrives, hunting for Valance.

We learned last issue that Valance knew where Nakano Lash was hiding, and Bossk was ready to kill him for that information. This issue literally smashes the sides of the panels as the two go at it, their old enmity broiling to the surface in a heavy-hitting fistfight that see’s Valance’s face once again shorn of its synthetic flesh and Bossk grabbing a sword to finish the job as we jump back a number of years to the Starskimmer, the vessel of Nakano Lash.

Flashbacks are often employed as a narrative device, useful if done well but  speed bump in the road if deployed incorrectly. Fortunately, Sacks knows how and when to play that card, filling in gaps of knowledge as we see the old rivalry between Valance and Bossk, and why it reached tipping point. A misunderstanding, and a decision by Valance to not involve someone he cared about in his current dealings. A snide remark from Bossk is halted by Lash who explains their next job, escorting the scion of the Mourners Wail; not their usual gig, but 100,000 credits goes a long way.

In the present, Valance finally gets the upper hand in their brawl, sparing an unconscious Bossk and preparing to leave before finding his droids head has gone. The result of that; Ooris Bynar has learned where Lash is hiding, on Ruusan in the Mid Rim. Issue 4 is set up to be a thrilling encounter.

Once again the art is action-packed and kinetic, Paolo Villanelli doing a bang up job while colourist Arif Prianto adds energy to the proceedings with liberal dolops of vivid colour and atmospheric black. Ethan Sacks clearly revels in this kind of hard-edged action, scripting bitter characters dealing out death and destruction with barely a second glance. That’s the world these characters live in – look elsewhere for conscience, empathy or apology – and as a gritty part of the Star Wars underworld it adds another thread to the ever-expanding tapestry of the galaxy far, far away.