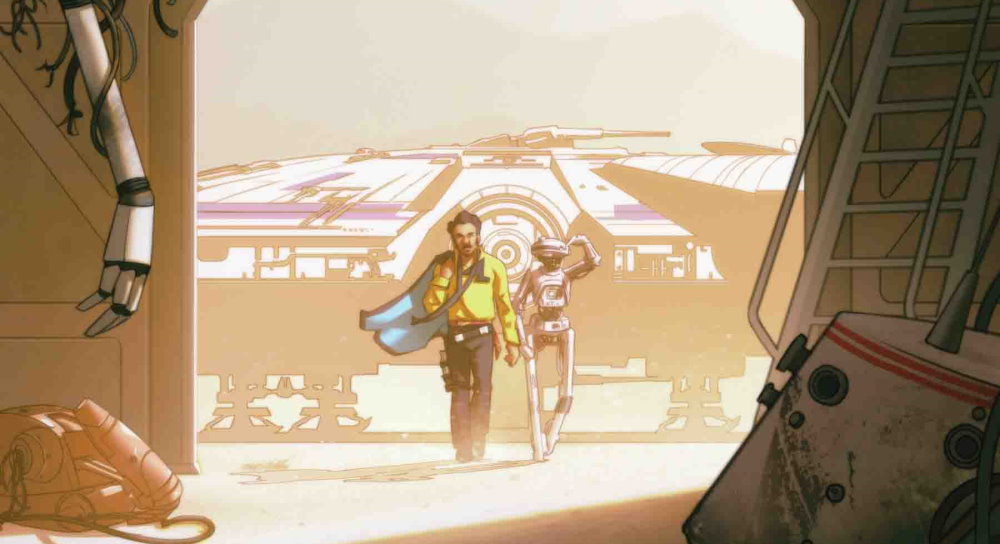 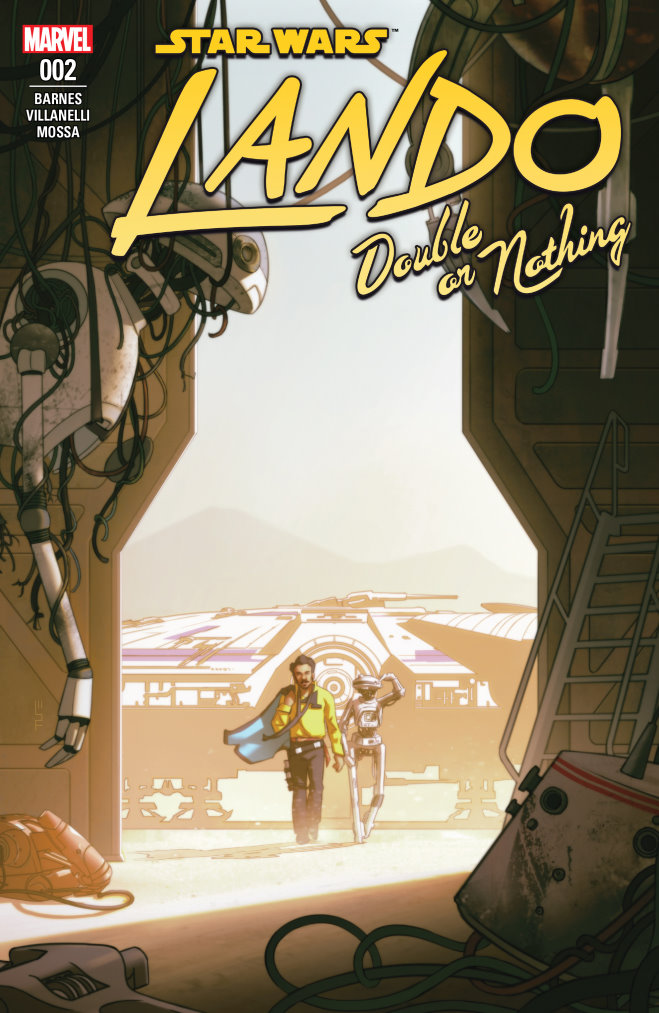 Star Wars Lando – Double or Nothing #2

LANDO Double or Nothing PART 2

LANDO CALRISSIAN, the “greatest smuggler in the galaxy” and captain of the Millennium Falcon, seeks fortune, glory and epic exploits to fuel his personal memoir — the Calrissian Chronicles.

But Lando also has big debts to pay and has taken a job from a Petrusian freedom-fighter named Kristiss to smuggle weapons to her people enslaved by the Empire on Kullgroon.

Lando and his droid companion, L3-37, have outmaneuvered the Imperial fighters in orbit, but what other dangers does this mission have in store?

There’s a fine line between an accurate portrayal of a character and parody. Misjudge the use of certain phrases, over-egg character tropes, be too heavy-handed with the catchphrases and what can be a spot-on impersonation of a character we know and love edges into caricature, and sadly that’s what we get here in the second issue of Double or Nothing as Lando, L3 and Kristiss arrive at Kullgroon to carry out their mission.

Indeed, apart from the off-kilter characterisations there’s not much happening in the issue. The Falcon engages in a bit of silent running, killing the engines to evade detection and gliding down to the planet and into the wastelands where there are fewer Imperials and therefore less chance of capture, and split up as they try to enter the droid processing plant. We’ve seen Lando record one of his infamous Calrissian Chronicles, and watch as he evades an attack from first a gang of armed thugs and then what appears to be a dozen ships before stealing a vessel of his own, making a run for it before being taken down and captured, all while Kristiss and L3 discuss their own grim options.

It’s a common occurrence, made in not just Star Wars but many fictional realms. Lando – just like his ‘buddy’ Han Solo – is a braggart, a loud-mouth and his own best spokesperson. Certainly, he is more than capable of handling himself and his talents are prodigious, as Qi’ra would later say, but here it’s a little too on-the-nose, and the constant conversation throughout every scene of battle is wearing. The Lando Calrissian of this era, 13 years before we meet him in The Empire Strikes Back is certainly cocksure and confident, cool, calm and capable but that’s overplayed to the point of being annoying.

As our three leads characters all face capture leading in to the third issue it will be interesting to see how they wrangle their way out of their situations. L3 (without any of the Phoebe Waller-Bridge sass or charm she showed in the film) is a three-dimensional thinker who should be able to wriggle her way out of any predicament and we don’t know much about Kristiss other than her mission to save her father and her apparent dislike of Lando. As for Calrissian, lady luck often plays a huge part in his adventures, which is possibly why this arrogant, self-invested version doesn’t ring true. Perhaps this series is where he learns the lessons of pragmatism, well drawn as it is by Paulo Villanellli and coloured deftly by Andres Mossa. We’ll soon find out.