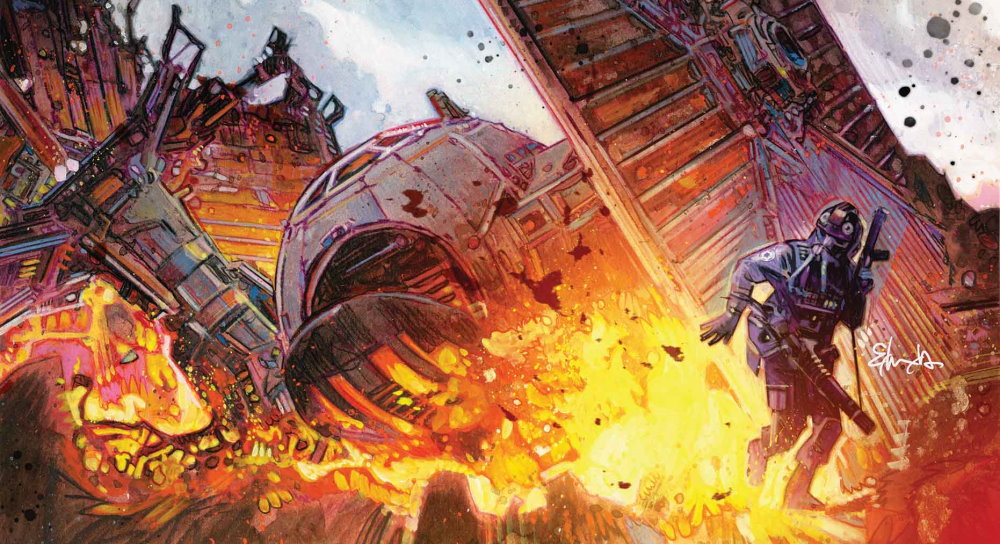 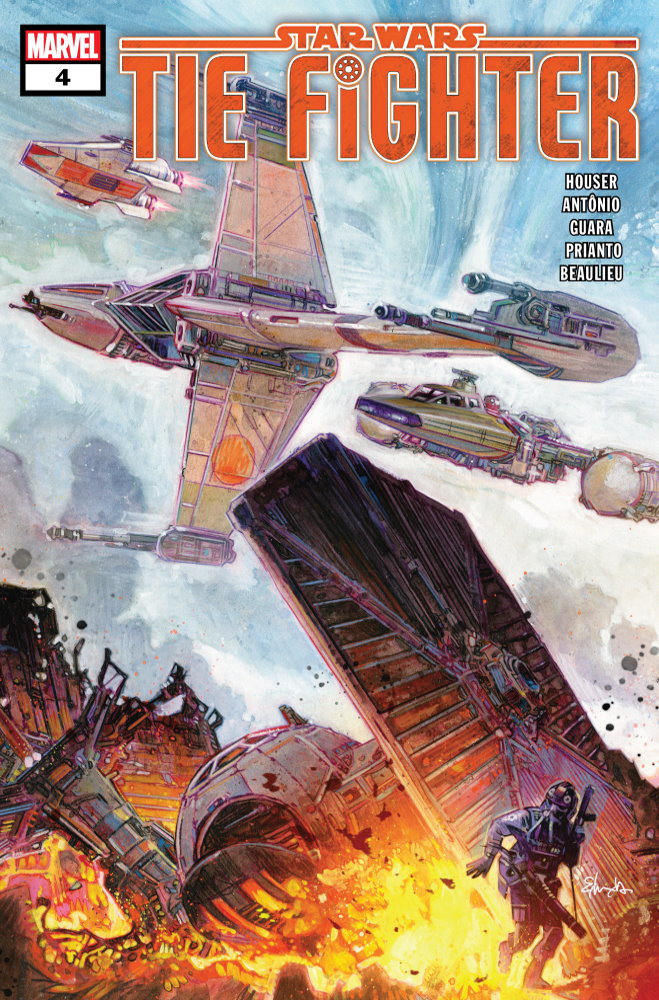 Orchestrating an escape, the squad attempted to seize the ship before prospective Rebel buyers arrived.

However, as battle ensued between Imperial and Rebel forces, Squadron Five gained control of the ship…but not before losing Lyttan and Zin to enemy fire!

After a passable start and a tight but second issue the third issue of TIE Fighter really took off, and I’m glad to say the fourth issue stands on the shoulders of that and really lifts off in a story that while featuring very little action gives us a fascinating insight into the Imperial war machine and the soldiers who power it.

We kick off on the Imperial training world of Carida, as two young cadets vie for the top spot in their class before being told they are being fed into that war machine and drafted into the 204th – Shadow Squadron – for a high-priority mission. Swing across the cosmos to the ISD Pursuer (some great ISD names in this series) where the remainder of Shadow Squadron are being briefed by an Imperial colonel who not only claims that Zin (who was shot down last issue) was feeding info to the Rebellion, but that she left breadcrumbs that lead to the rebel base, a vessel crawling through space. Low on numbers, they travel to Ryleel Base where their ranks are filled by those two cadets, something Broosh was not expecting.

It’s expected to get inside the heads of the alliance. After all, they’re the good guys, even when they use questionable means to achieve their goals, but it’s not so common to have an insight into the relationships of the Empire and here Houser excels, giving us a glimpse at the people behind the power. And they are just that, regular people fighting for a cause they believe in. It’s give spine to the story, knowing there are people behind those implacable helmets and as the main portion of the story ends it’s an odd feeling to hope they fare well in the final battle of issue 5.

The back up story is once again without action, but no less interesting. As a young Ganem Kahi gets nervous as his elderly grandmother talks openly about the Emperor and his lack of heirs (how odd reading that now, written before the release and reveals of The Rise of Skywalker) we see how many older citizens of the galaxy night view the new order. She refers to it as ‘the Republic’, something Ganem wearily corrects her about, but proudly tells him of the many generations in their family who have flown for the Republic, with the coda being a sweet reveal that she was a part of that line.

The artwork in this issue is really pleasing on the eye, not at all static with the mostly talking heads, and conveying the emotions deftly while the second back-up flashback has an early 90’s, Todd McFarlane fee to the art that works well. If the fifth issue can build once again on this issue, you’d have to consider the series a success.

Star Wars: Tie Fighter
$31.78
Buy on Amazon This is a paid link. Learn More. Clicking the link may take you to the Amazon store servicing your country Price incl. tax, excl. shipping.  Details correct as at: 2021-05-10