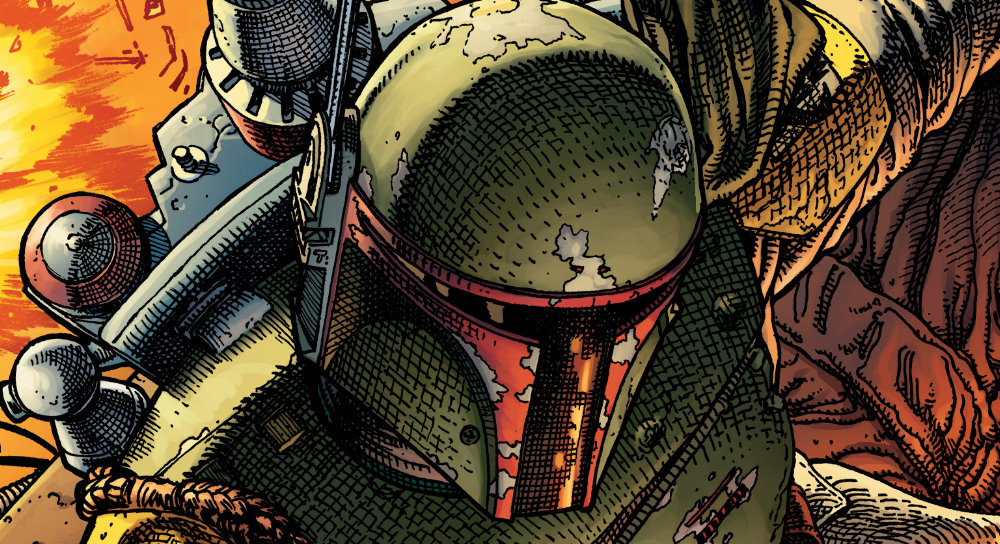 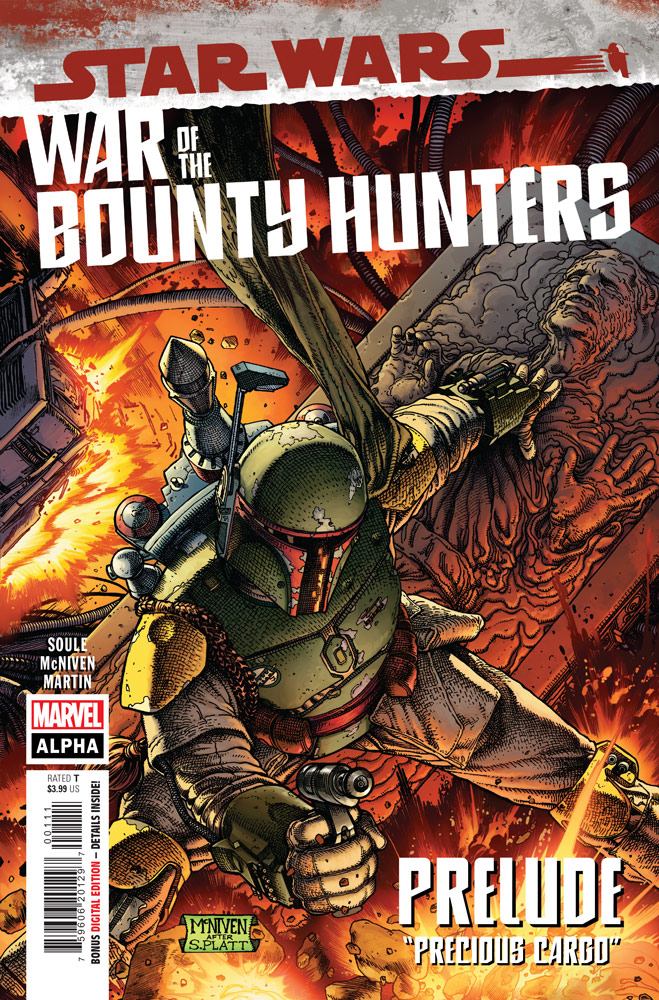 Jabba the Hutt eagerly awaits Fett’s delivery of Solo’s carbonite-frozen body to Tatooine, where the crime lord will exact his final revenge.

Han Solo’s debt is thus paid. But Boba is desperate for a payday himself….

The time period between The Empire Strikes Back and Return of the Jedi is arguably the most sacred period in the entire Star Wars timeline. The prequel trilogy has the pivotal gap between Attack of the Clones and Revenge of the Sith, which is occupied by the animated adventures of The Clone Wars, while the sequel trilogy only takes place over a couple of years and is yet to be truly explored and expanded. That sweet year of in-universe time, as Han Solo is taken, the Empire growls and the Rebellion plan, is very special indeed.

Not only because of what was happening in the galaxy. For the creatives behind the modern Marvel stories, they are contending with a golden age of their storytelling back in the early 80’s when comic icons like Walt Simonson and David Michelenie were at the helm, scribing and crafting stories that have lived long in the memory. It’s a path well trodden, so for Charles Soule to attempt something in that time period, as Boba Fett takes Han Solo to Jabba the Hutt, is a brave one. That he delivers something fresh and interesting in doing it is worthy of note.

We join Fett in deep space and in conversation with Bib Fortuna as he takes the carbonite frozen Solo to Tatooine. Of course, that precious cargo makes Fett the most wanted bounty hunter in the galaxy, but the new wrinkle to this very familiar set up is that the carbonite matrix holding coffee table Han Solo prisoner is becoming unstable. If not fixed, the corellian will melt into a pile of goo, and so Fett changes course, winging around the Outer Rim to the smugglers moon of Nar Shaddaa and a Besalisk ‘doctor’ with knowledge of such matters. This is the galactic underworld, so nothing’s simple; the Besalisk Doc Ragon wants paying up front, but also offers Fett an alternative, to take out Wyrmen Lictor, a fighter who cost Ragon a ton of money. If Fett helps him with his vendetta, Ragon will ‘fix’ Solo, and so Fett paints his armour black to avoid detection as Boba Fett, names himself Jango and enters himself in the arena battles, working his way up the rankings until he meets Lictor in the final.

That original journey anti-clockwise around the rim from Bespin to Tatooine was clearly taken via a circuitous route, with his enemies knowing many of the back road hyperspace routes Fett would have taken. Here, his problems are far more immediate and perilous, with a potentially spoiled cargo and the arachnid-like Lictor to deal with. Fett winning in gruesome fashion is no surprise, or that in his absense the Besalisk is murdered and Han Solo taken. We even get a quick panel in Jabba’s Sail Barge as Fett explains to Fortuna that the delivery of Solo will take a while longer than planned, setting up the next chapter of the War of the Bounty Hunters.

Tight, fast and compact, Fett’s infamous word economy is perfectly portrayed by Soule, the story skipping along as the slide from minor problem to disaster is drawn beautifully by Steve McNiven. Saying the art’s easy on the eyes is an understatement; this is crafted to within an inch of its life, the colours by Laura Martin complementing the images and delving us into the seedy side of the galaxy. As a one-shot it works well, kicking off the crossover with aplomb, and achieves its mission of leaving us hungry for more.