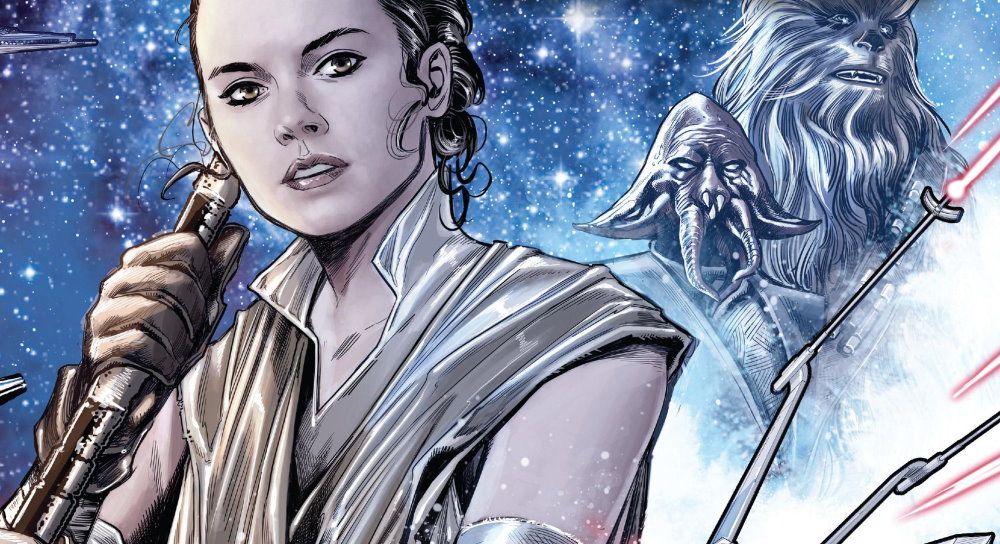 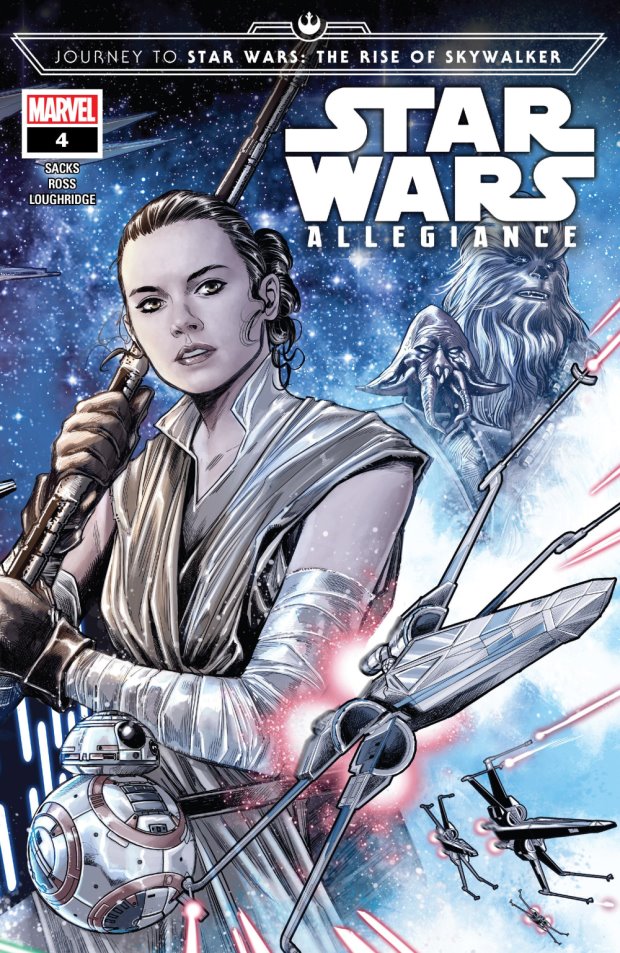 In desperate need of aid to fight the evil First Order, Resistance General Leia Organa traveled to Mon Cala to recruit her old Rebellion allies into the fight. But some of Nossor Ri and Chadkol Gee’s isolationist Quarren attacked Leia’s group, and Rey, Rose and Chewie were arrested. The only way to regain their freedom—trial by combat.

Meanwhile, on the Moon of Avedot, Resistance fighters Finn and Poe Dameron were after weapons to arm the dwindling Resistance but were ambushed by a trio of merciless bounty
hunters, intent on taking Finn to the First Order.

Locked in battle with Chadkol’s security droid, Rey gained the upper hand. That is until the droid turned on the trial’s spectators. Rose stepped in to help Rey, in turn breaking a sacred rule and exiling them all from the watery world. But before they could leave a Quarren dropped off a mysterious container—which exploded….

As the cosmos held its breath and the First Order pushed on with its plans to subsume the galaxy, key world by key world freedom was torn from their clutches, including the once loyal world of Mon Cala. The previous three issues of Allegiance have seen Leia plead with the leaders of the water world to once again join the fight against tyranny, and their reticence to pick a side in a fight that increasingly looks like a forlorn hope. With the loss of Admiral Ackbar and the First Order freely raining fire on long-neutral planets it’s understandable that even Leia, a galactic beacon for believers in freedom, wouldn’t be enough to sway them.

As we rejoin the story, a bomb has exploded putting everyone at risk, and as Rey contains the explosion, capturing the culprit and bringing him before the Mon Cal king to explain himself, Leia – as always – chooses the perfect moment for forgiveness and unity, bringing the Mon Cal people back into the forces of freedom. It’s a powerful reminder not only of Leia’s political acumen, but also her position as an icon within the galaxy. As Luke had become a myth, so Leia has become a living legend of what defiance against tyranny can look like.

We also have Finn and Poe on their own mission on Avedot, attempting to acquire much-needed weapons for the Resistance as the end game against the First Order draws near, only that mission goes nowhere near as smoothly as Leia and co. You could argue that it’s a failure – many weapons are lost, but still a huge cache is taken – and again Finn, who we know to be more than capable, needs rescuing. It’s a fun side mission with an explosive and action-packed finale, but is of little consequence to the wider plot and largely serves to involve Finn and Poe in the story.

With The Rise of Skywalker now out and heading our way on home video, it’s interesting to view the characters as they are presented here. In Rise, Rey is far more like her The Force Awakens self, initially still unsure of her place (and most likely wishing she’d never learned it after Exegol) while Finn is still a loyal and grateful friend to Poe and Rey, thankful he was able to escape the clutches of the First Order and now a fully invested member of the Resistance. Poe is still a highly skilled warrior with a past not dissimilar to Han Solo (spice runner, there’s surely some interesting adventures to be told on Kijimi off the back of that) and Leia the beacon she always was.

Who in the Star Wars story has inspired as many people as Leia Organa? Here, while a nervous Mon Cala pauses before making its choice to hand over its formidable fleet (and as the last panel shows, likely paying for that decision) Leia finds the words to ease them over. Rise may be her swansong, her final living actions saving Ben and Rey (Rey from the blade of Kylo, Ben from Kylo and the dark) before joining her brother and father in the Force, but here it’s clear that what little fight is left in the spirit of the galaxy is willing to listen to the venerable senator, general and Princess and ignite yet another spark of rebellion.

While the series doesn’t break any barriers it’s well presented with pleasing artwork and solid characterisations, but the real gold lies in the wider story. A galaxy that, while not heeding the clarion call sent out at the end of The Last Jedi, is still prepared to fight. That’s a message that finally arrives at the end of The Rise of Skywalker – albeit taking some time – and proving that – as if we ever doubted it – whilst being a politician, mother, lover, general, Jedi, warrior, at the end of the day Leia Organa was far more than the sum of her parts.