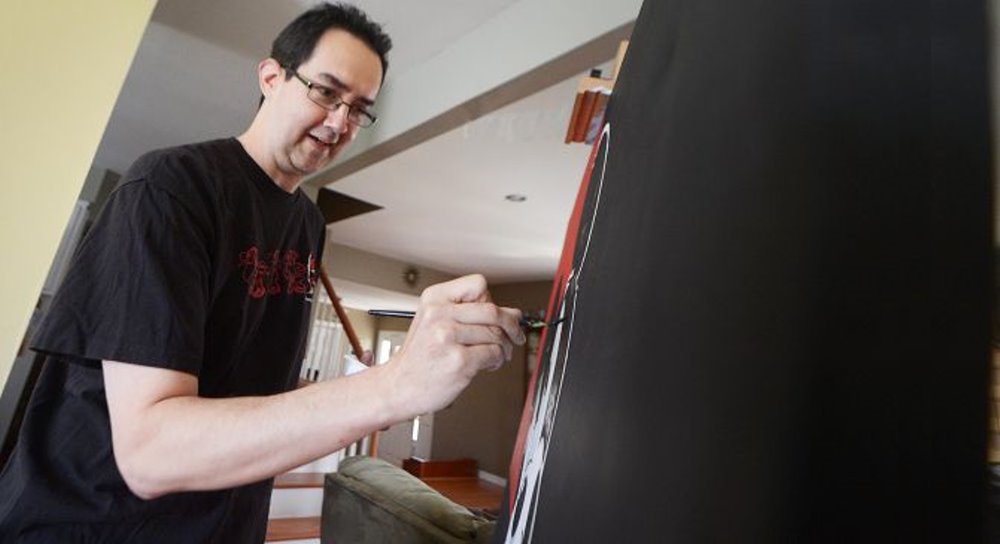 Between 1999 and 2009 Lightsabre.co.uk brought news, fanfic, podcasts and much, much more to the masses. Our one hundred and twelfth guest was known for his stunning artwork on Topps trading card sets – Kevin Graham.

KG – Thanks for the opportunity. When you said this was an informal interview I didn’t realize you’d be sitting here in your boxers. 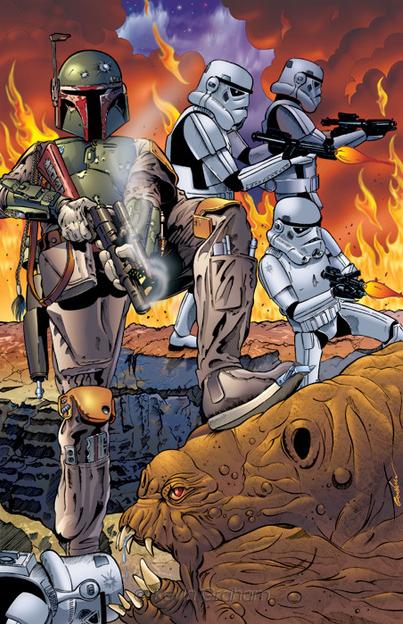 Lightsabre – You’re becoming a regular fixture in trading cards sets with your art being distributed far and wide. When did your career as an artist begin?

KG – I have been drawing ever since I could remember. I’ve always wanted to draw Star Wars as a profession and am very glad I finally got the opportunity to. I’ll probably draw up until my final breath. I find drawing very relaxing. Well at least when I don’t have deadlines looming over my head. I actually started very young doing artwork for companies, mostly logos and illustrations. Around 2000 I started my own company covering all areas of media.

KG – I’ve been interested in Star Wars ever since I saw it in the theaters in 1977. I was seven at the time and it was something so different then anything I had seen before. I started collecting the Star Wars figures throughout the years. Sadly I opened them all. When your a kid what kind of fun is an action fiction still in it’s box. I still collect the action figures now but don’t open them. My kids think I am nuts. I just say, at least I know where all the parts are to my figures, still in the box.

Lightsabre – Every artist has his or her own way of planning, preparing and executing a piece of art. Tell us how you prepare yours?

KG – It often depends on the project. I usually start by gathering reference materials/photos or if possible do a photo shoot myself. For Star Wars related projects I often do photo shoots with my friends at the 501st Legion. In the drawing process I usually do pencil sketches of the basic layout. After doing sketch cards for a while I wanted to do something different so I decided to do mini animation cells. Basically I take a clear piece of vellum/plastic put it over my initial pencil drawings and go over the outlines onto the cell with black ink. After this I flip the cell over and paint all the colors on the back. The process of coloring it has to be done rather quickly per color as the acrylics dry fast onto the plastic. If I put a heavy coat of paint on I will often use a hairdryer to dry them faster so I can move onto the next color. When done with the animation cell I will paint a background onto an official sketch card provided to me by the companies I work for or onto my own cards. When that is done I apply a thin strip of a gel based super glue to the top of them cell card then attach it to the official sketch card. All the clear areas on the cell card will then show the background on the card. This process sometime takes a long time but in the end is worth it. The colors are very vibrant and the final art appears to give a 3D look. 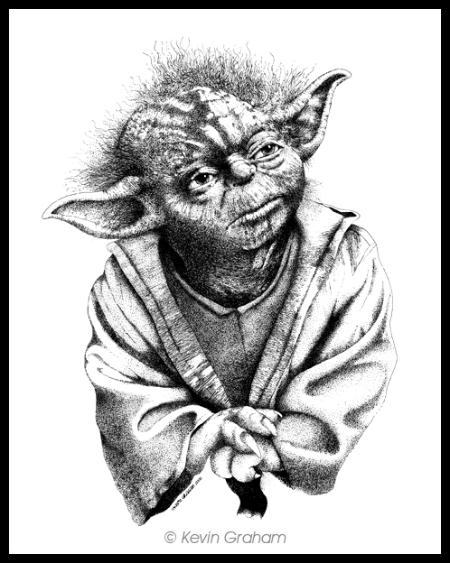 Lightsabre – As a working artist you must attend a lot of conventions. How do you enjoy the interaction with the fans?

KG – I don’t attend to many conventions as of now due to my busy schedule. When I do attend them I usually attend smaller conventions because it gives me the opportunity to spend more time talking with fans. I use to be a very shy person but attending conventions has made it easier for me to socialize with people. It’s nice to speak with so many other people interested in what I do.

Lightsabre – As well as your Star Wars art, tell us something of the other works you produce.

KG – Well I work in all aspects of media. I own a graphic design and web design company. With this I have had the opportunity to do artwork and design work for a large list of celebrities and for two years I even did design work for President Bill Clinton and Hillary Clinton. In regards to sketch cards I have worked on Iron Man, Lord of the Rings Masterpieces I & II, Dr. Who, Halo, CSI, Heroes 2, Indiana Jones Heritage, Indiana Jones KOTCS, AVP Requiem, Ray Harryhausen, Hammer Horror, Marvel Masterpieces, Wizard of Oz, and many more. I have also worked in photography, sculpting, etc.

Lightsabre – You are involved in one of 2008’s huge Star Wars events, The Clone Wars. Tell us about your involvement with the new movie? 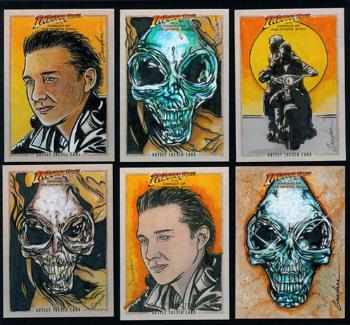 KG – Topps will be releasing a trading card set to coincide with the upcoming Clone Wars movie and I have been given the opportunity to do sketch cards for the set. I will be doing a total of 300 cards. The majority of my sketch cards will be just inked in black but still highly detailed. Because I have so many different projects going on right now I was only able to do about 20 color cards. All of which are animation cells. I am really happy with the way they came out and hope all of the people who will be collecting the cards will enjoy them also. Unfortunately I’m not allowed to show them yet but if you check my site often enough you’ll come across them when they are approved. I really enjoyed working on this set.

While working on the set I got a chance to take a break and go to Disney’s Star Wars Weekends in Orlando, Florida with my family. I often speak with Steve Sansweet and I finally got to meet him in person there as he was doing a book signing. He spoke a bit about the new movie at an event and showed an exclusive trailer. It’s going to be a great movie from all I have seen.

Lightsabre – Tell us of your interests outside of your artwork and Star Wars.

KG – It seems I am always drawing Star Wars artwork which I love to do but in between this I am often remodelling our house we bought a few years ago. I’ve been remodelling the entire house. Removed all the carpeting and put in wood floors, repainted everything, knocked down walls to put arches and columns in, etc. I also enjoy watching movies and spending time with my family.

Lightsabre – With the new TV series and CG show on the way we are in for a lot more Star Wars. Are you optimistic for Star Wars future?

KG – Yes. I always enjoy going on the Star Wars related sites and seeing what new things are coming out. Although George Lucas says he won’t be doing anymore big screen movies it would be great to see some movies related to the expanded galaxies, video games, books, etc. I am really looking forward to the TV series and the CG movies as well though. 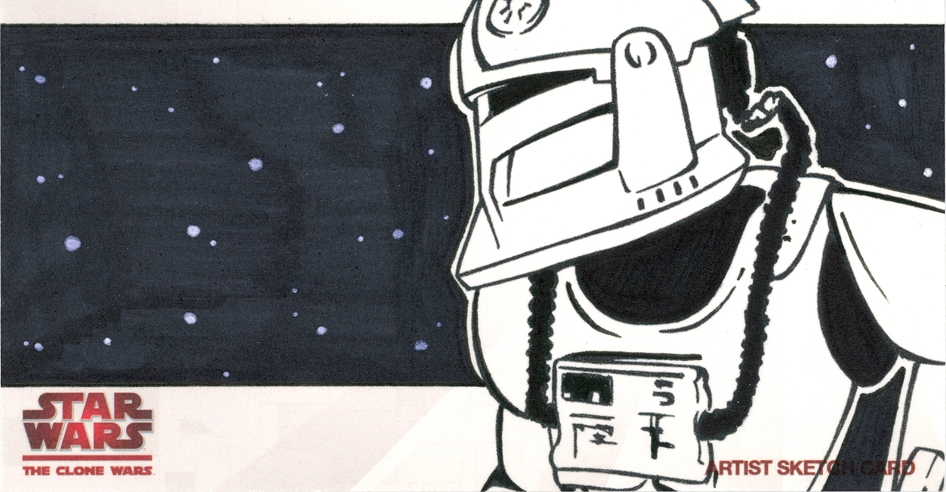 Lightsabre – Which of the many characters you have worked on is your favourite?

KG – I have always enjoyed drawing Yoda and Boba Fett. Drawing Yoda as a animated character is a lot of fun. I did a few of him for the Clone Wars set. He has some great expressions and features to work with.

KG – I have some Lucasfilm related projects I am doing, a few sketch cards sets, a graphic novel, spending time with my family, getting old and all that good stuff. My life is often filled with surprises but you can keep up to date with many of them on my site: www.kevingrahamart.com

KG – Ummm, do you guys get paid in Cheerios to work on the site? 🙂

Lightsabre – It’s been a great interview, and thanks for being our guest on Lightsabre. Just one final question. Darth Stewie, Darth Maul and Darth Binks are thrown into a sealed room. The airlock shuts and the air is seeping out. Only one of them will survive, but which one and why?

KG – I’d have to say Darth Stewie, one Darth Doodie in the diaper and the other two are done for sure.