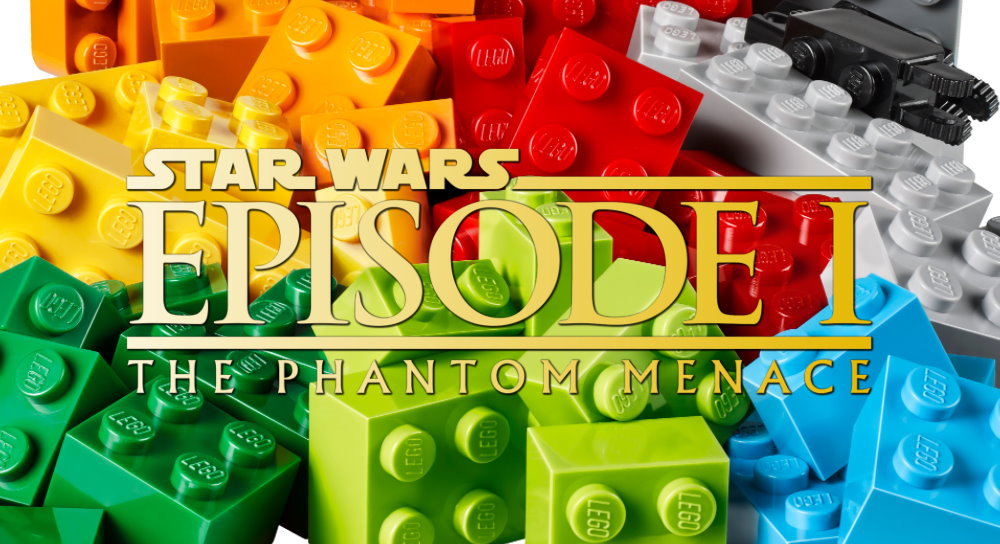 During the past year we have been celebrating the 20th anniversary of Episode 1 – The Phantom Menace. However, that is not the only 20th anniversary that we have had this year. 1999 also saw the first released Star Wars LEGO sets. In the last two articles of this year we take a look back at the sets and compare them to their modern counterparts. In this first part we talk about the sets based on The Phantom Menace. 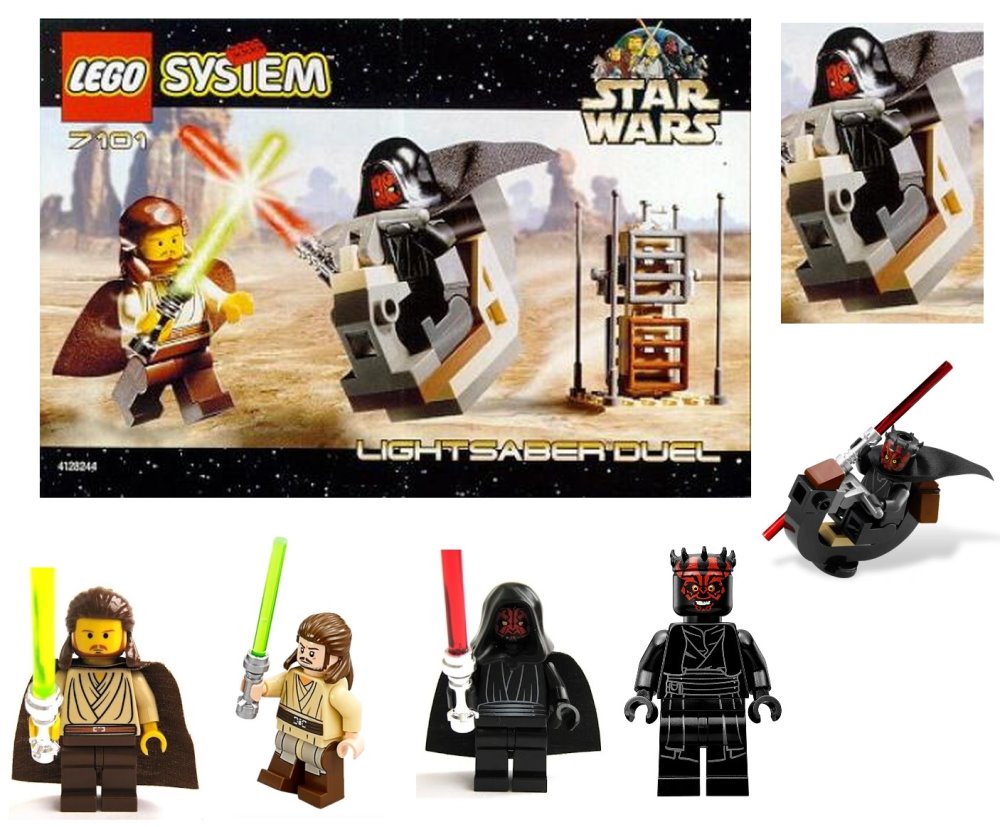 With all of the sets mentioned in this (and the next) article having been released at the same time, the numbering technically makes this the first LEGO Star Wars set ever. The set features the duel of Qui-Gon Jinn and Darth Maul, who has his FC-20 speeder bike (better known as the Bloodfin) to ride on. To better show that this happens on Tatooine, a very simple build of a moisture vaporator with a tan ground piece was included.

This set has no modern remake, but all the elements have returned as part of different sets. Qui-Gon has four minifigure variants, with the latest version being from 2017 (75169 Duel on Naboo). The one thing that never changed between those four variants, are the lightsaber (which never changed in twenty years except for the one used by Dooku) and the hairpiece, which was unique to Qui-Gon for a long time until it was also used in black for Bard the Bowman in The Hobbit sets and for Tasu Leech of The Force Awakens. Darth Maul has five variations if we do not include the two from The Clone Wars. The biggest change being more printed details and the horn piece. In this set Maul also has just 1 red lightsaber piece as he would not ignite the second blade until later in movie. The Sith speeder, build here with a couple classic Space pieces like the control panel and seat element, returned three more times, all of those as part of Sith Infiltrator sets. And even the moisture vaporator has returned a couple of times as part of other sets, first in 2002 as the Tusken Raider Encounter set in 2002 (set 7113) and more recently in 2014 as set 75052 as part of the Mos Eisley Cantina set. 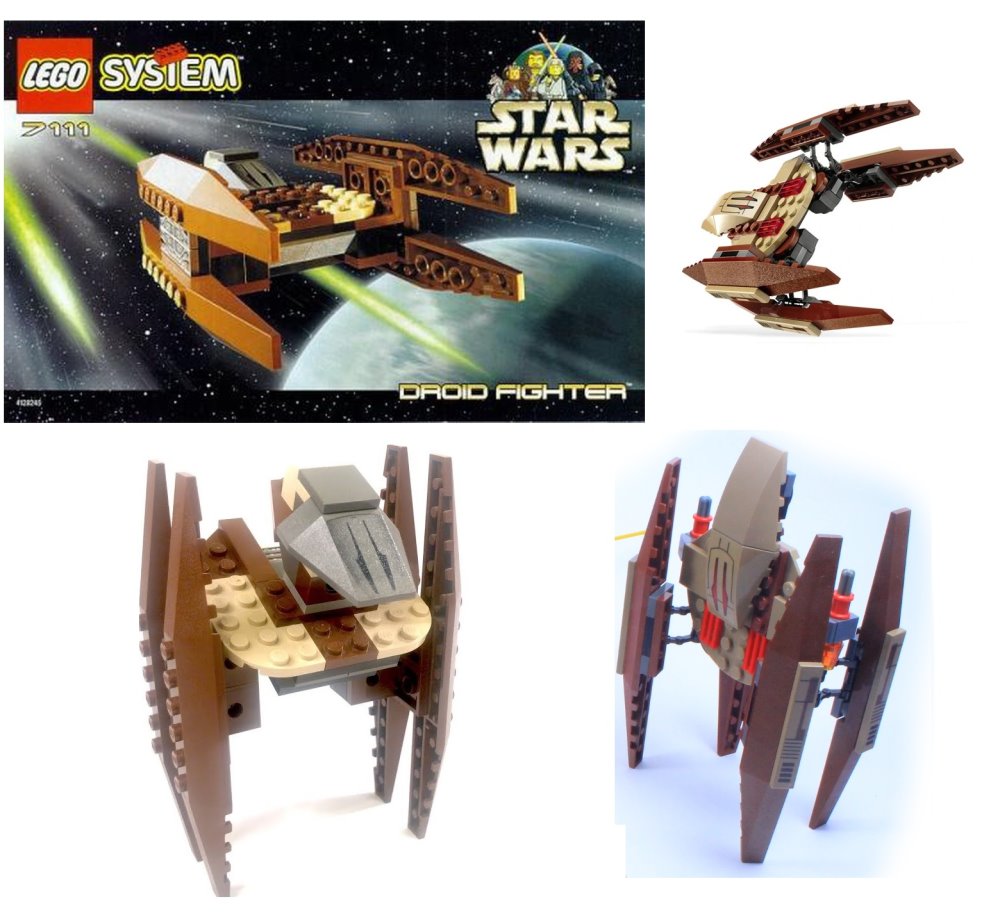 Out of the regular sets this is one of the few Star Wars sets not to include a minifigure, but it introduced a multi-faceted slope element and was able to switch between the flying configuration to the walking mode. And while we had plenty of other Vulture droids in the past twenty years of sets, only one was not a grey/blue one of The Clone Wars but a brown The Phantom Menace version. This was set 7660 when it was paired with a N-1 starfighter. 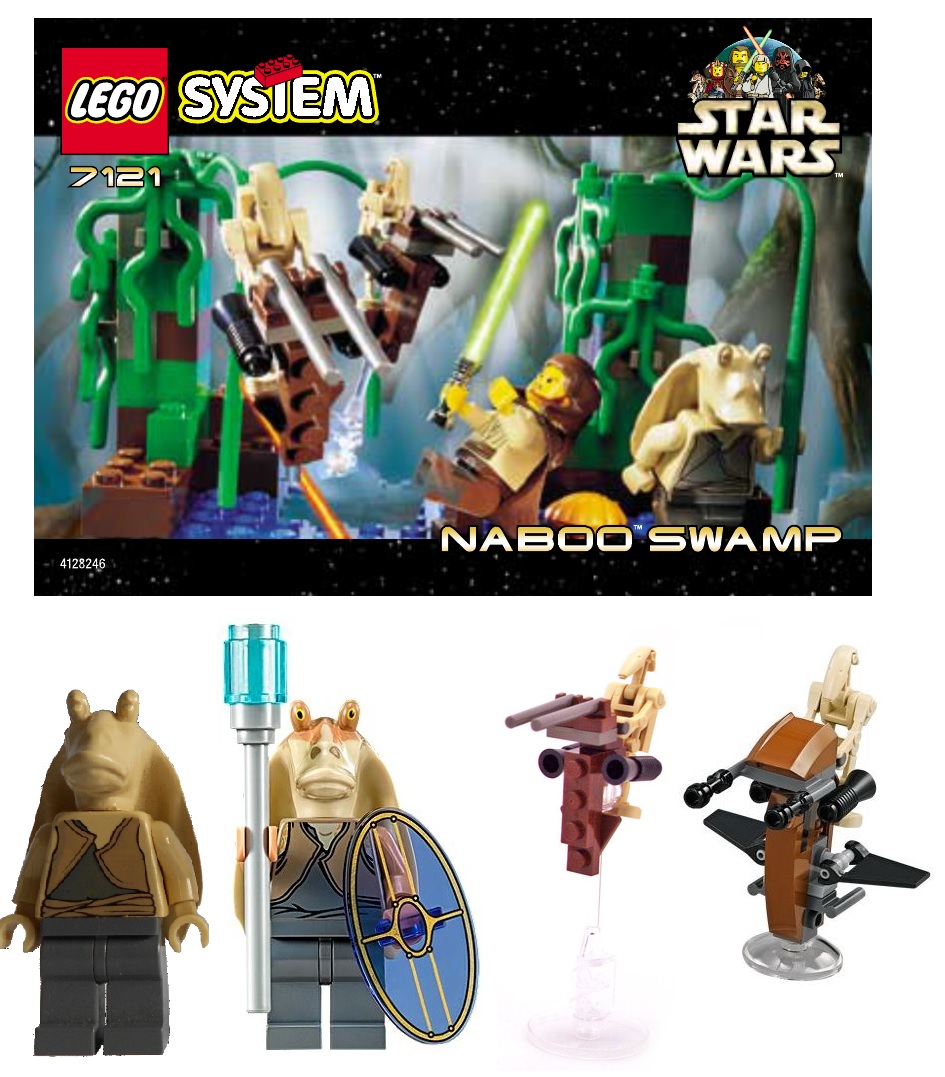 This small set recreates the moment where Qui-Gon Jinn runs into Jar Jar Binks when pursued by two battle droids on STAPS. The Jar Jar Binks minifigure was one of the first minifigures to have a uniquely moulded head piece along with C-3PO. But our beloved protocol droid would not arrive until the next year, 2000. This head piece, with different coloring, was re-used for the other Gungans that found their way to sets: the generic Gungan Warriors and Captain Tarpals.

LEGO tends to only introduce new elements if they are versatile and can be used more than once. Another good returning element introduced in 1999 Star Wars sets are the Battle Droids that to this day keep returning, albeit with slightly different arms and sometimes in different colors. The STAPS they use have gotten beefier over the years, with each new variation adding more and better bricks used for the gentle curves of the vehicle. The most recent one was in 2014 as part of the 75058 MTT set. 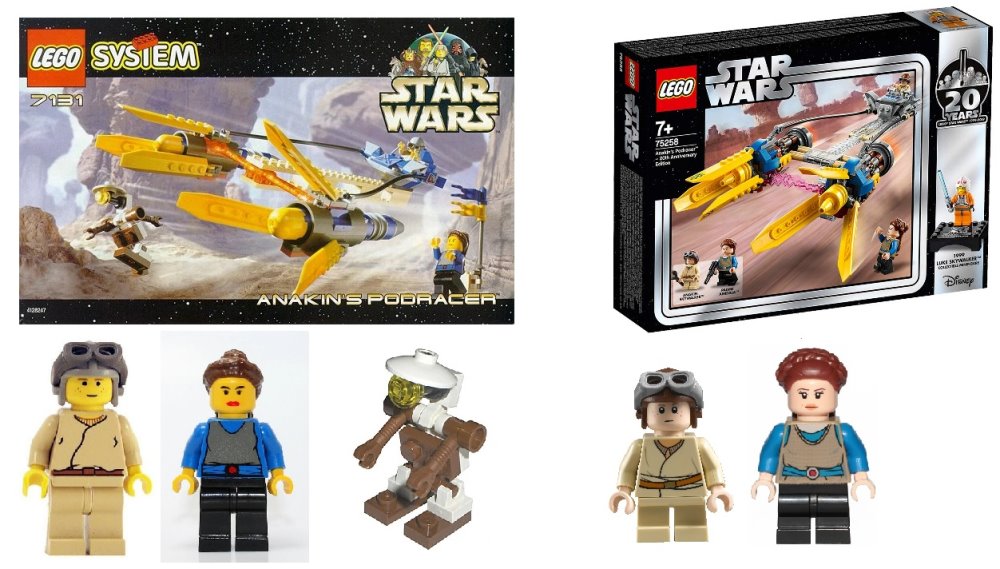 With just Anakin’s podracer and 2 minifigures, three if you count the buildable pit droid, this set was mostly released  for the children who were unable to buy the more pricier 7171 Mos Espa Podrace. The podracers in both those sets include brick-built, sand-colored booms that connect the Pods to the transparent parts of the energy couplings to increase stability of the sets.

For this years the 20th anniversary sets, this one was chosen to get a modern upgrade in retro-style packaging. The pit droid did not make the cut however, perhaps to make room for the yellow-head Luke Skywalker figure with commemorative plate. 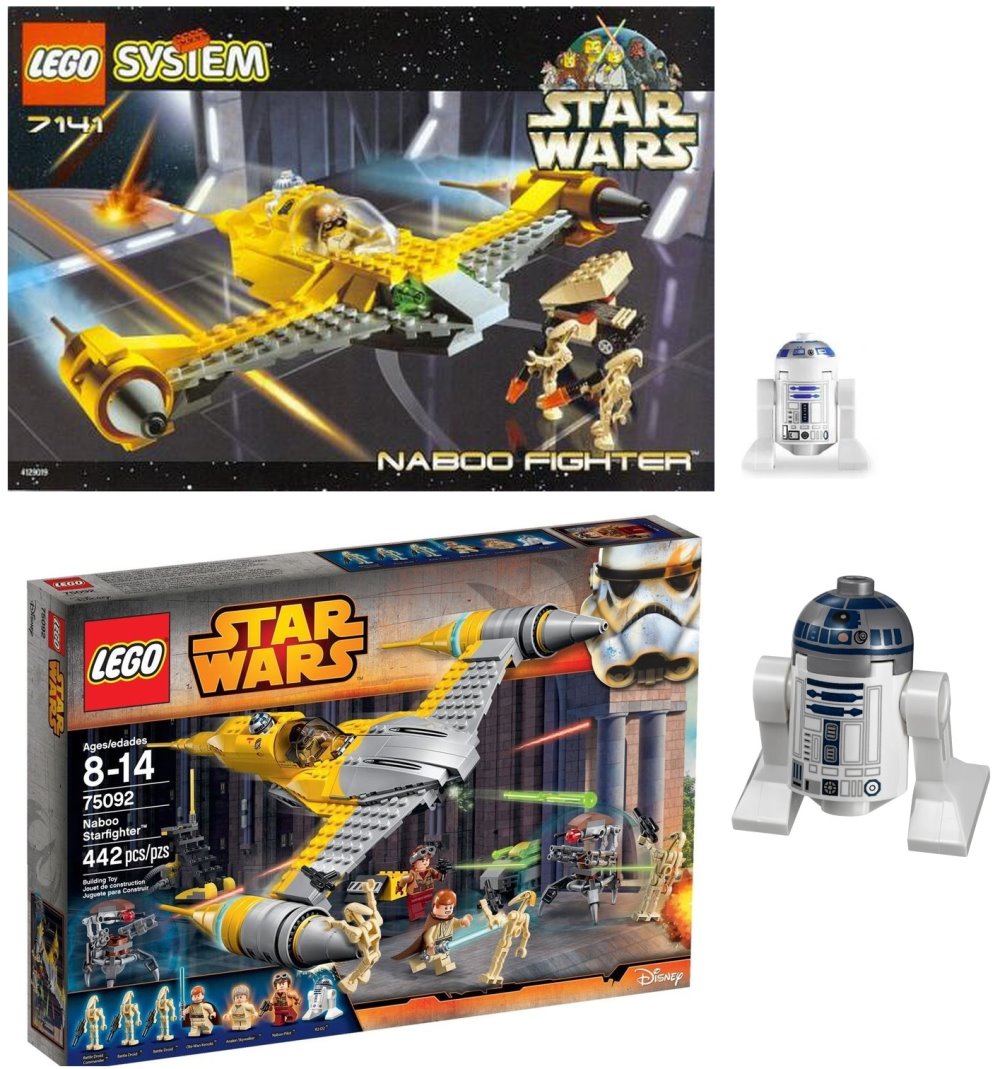 And with the release of 7111 Droid Fighter it makes sense that we would also be flying a brick-build Naboo N-1 Starfighter into battle against the Trade Federation. In this set we get Anakin, Artoo and two battle droids. A small extra build was included, that of a service vehicle not seen in the movie.

The first non-moving short legs would be introduced with Yoda’s minifigure in 2002 with the release of 7103 Jedi Duel, so the Anakin minifigure in this set, and the podracer sets, had regular sized minifigure legs. In the 2007 upgrade of the N-1 (7660 Naboo N-1 starfighter and Vulture Droid) we first got our flesh colored and small legged young Anakin Skywalker figure. This 2007 however is not the most recent version that has been released. That distinction goes to the 2015 set of 75092 which contains a whopping 9 minifigures! Including a redesigned Naboo pilot and the fourth version of the buildable Destroyer droid. 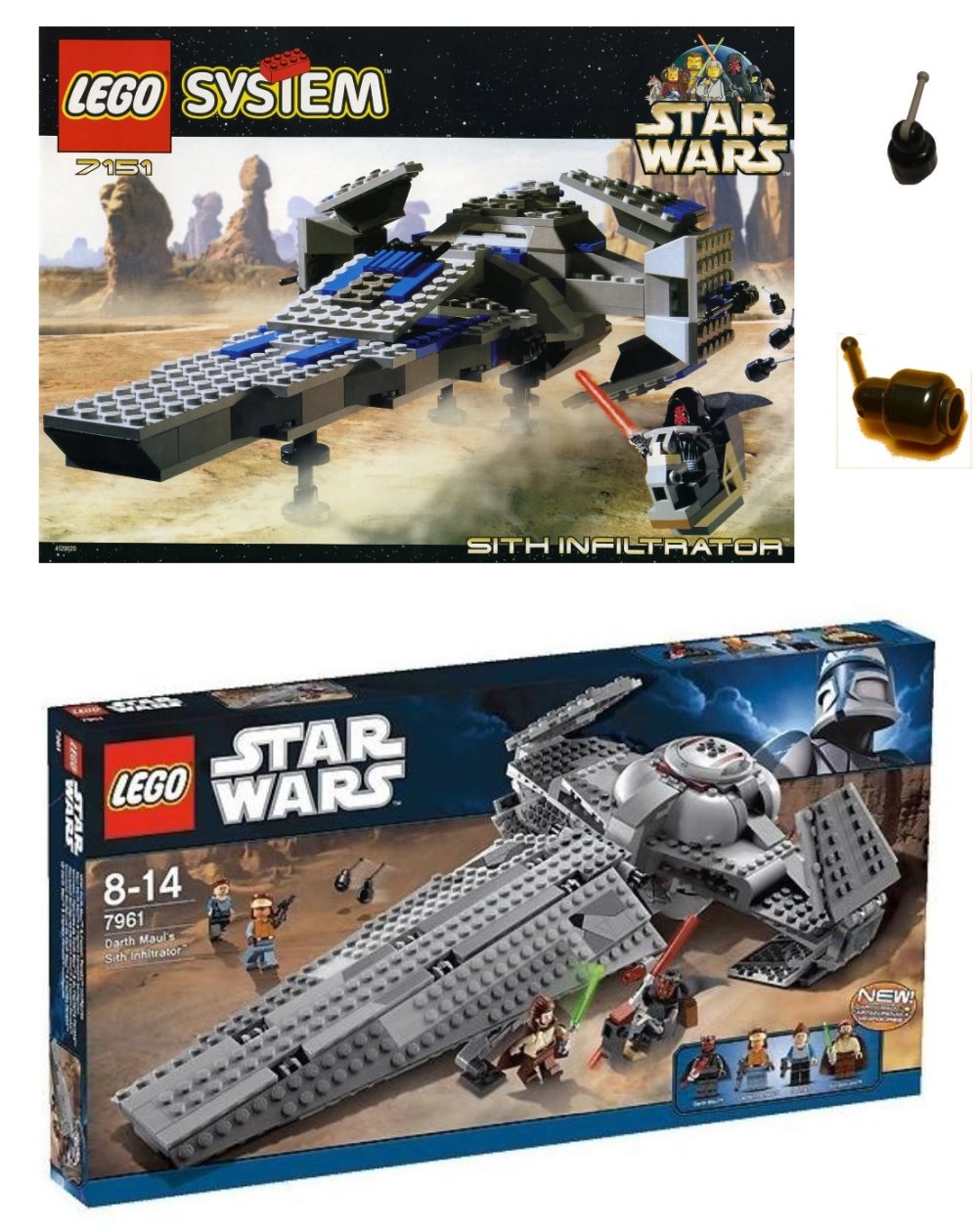 One of the biggest sets of The Phantom Menace, along with the next two, this was LEGO’s best attempt to recreate the Sith Infiltrator. Which was a decent attempt at the time with the limited parts available, but with just one color of grey at the time, the ship got the same blue highlights like the early TIE Fighters.

Besides the minifigure of Darth Maul, with the same speeder bike as the smaller 7101 Lightsaber duel, you get three probe droids to build. These DRK-1 Dark Eye Probe Droids were upgraded only in the other two Sith Infiltrator sets: 7663 (2007) and 7961 (2011 – Which was also the first time that we got a Captain Panaka minifigure). 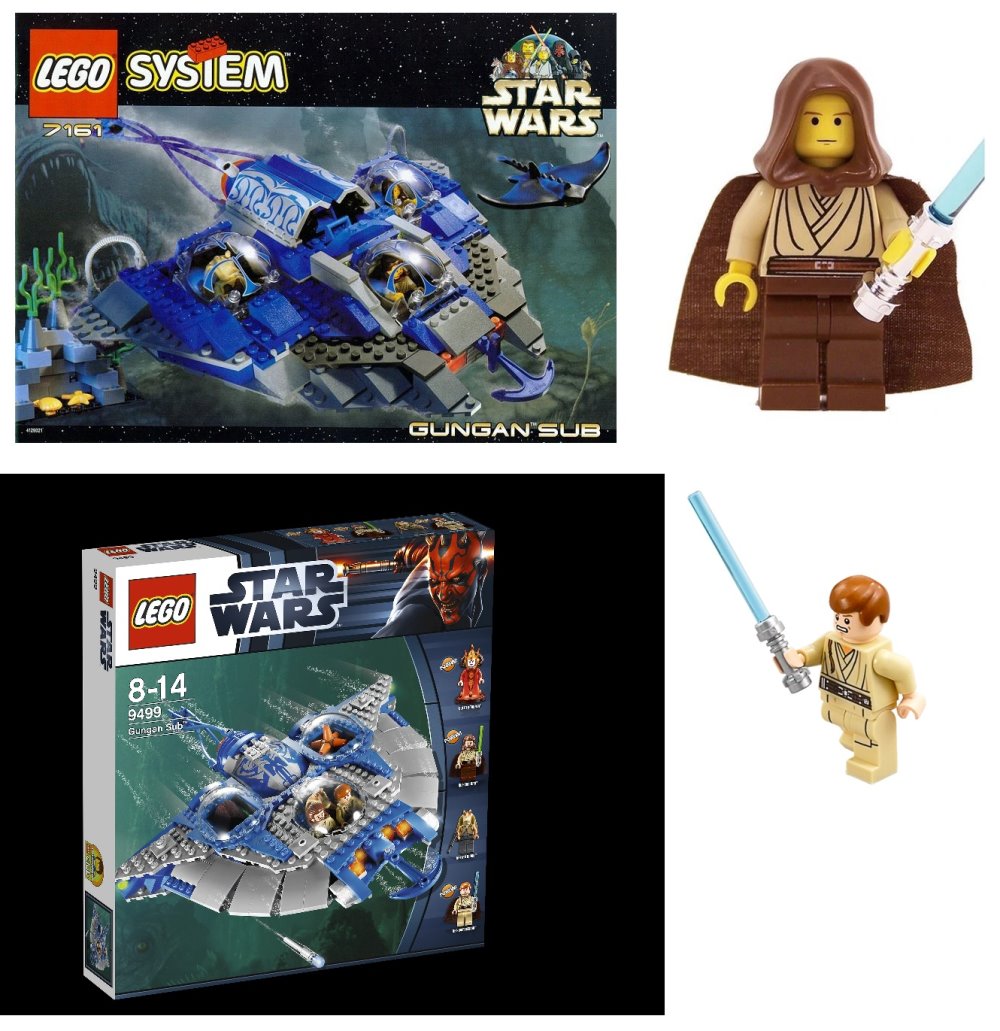 Because in the eyes of LEGO you can never have enough swoosh-able ships, they delivered in 1999 the Gungan Sub, or Bongo. With the limited parts available it was difficult to get the many smooth round curves down just right, but all in all LEGO did a really good job with this set, and still looks nice to this day. The only thing they did change, probably because there was not a dome piece big enough, is that instead of the 2 Jedi and their Gungan navigator sitting together beneath one dome bubble, they each get their own cockpit bubble. This also helped the playability because you could detach the segments into 3 smaller subs. Completing the set was a minibuild of some underwater foliage with a manta ray. This set was revisited only once, in 2012, with 9499 Gungan Sub. This set was noteworthy because it gave us for the first time a minifigure of Queen Amidala, and thus completing the Star Wars Episode 1 minifigure logo (as seen on top of this article) at long last! This newer Gungan Sub keeps the same three individual cockpits, but with a newer piece and the ability to fit all three minifigures in one cockpit.

Next to yet another Jar Jar Binks and Qui-Gon minifigure was Obi-Wan as a Padawan. 1999 was a good year for Obi-Wan fans, because not only did his younger version appear in this set, at the same time the A New Hope version was also released as part of 7110 landspeeder. Obi-Wan is also one of the characters with the most different variations of minifigures because each time he was included in a set they changed something on him. In the case of his Padawan appearance, we have 5 different versions with the latest being in 2017’s 75169 Duel on Naboo, including the alternate expression of him being angry and ready to avenge his master’s death. 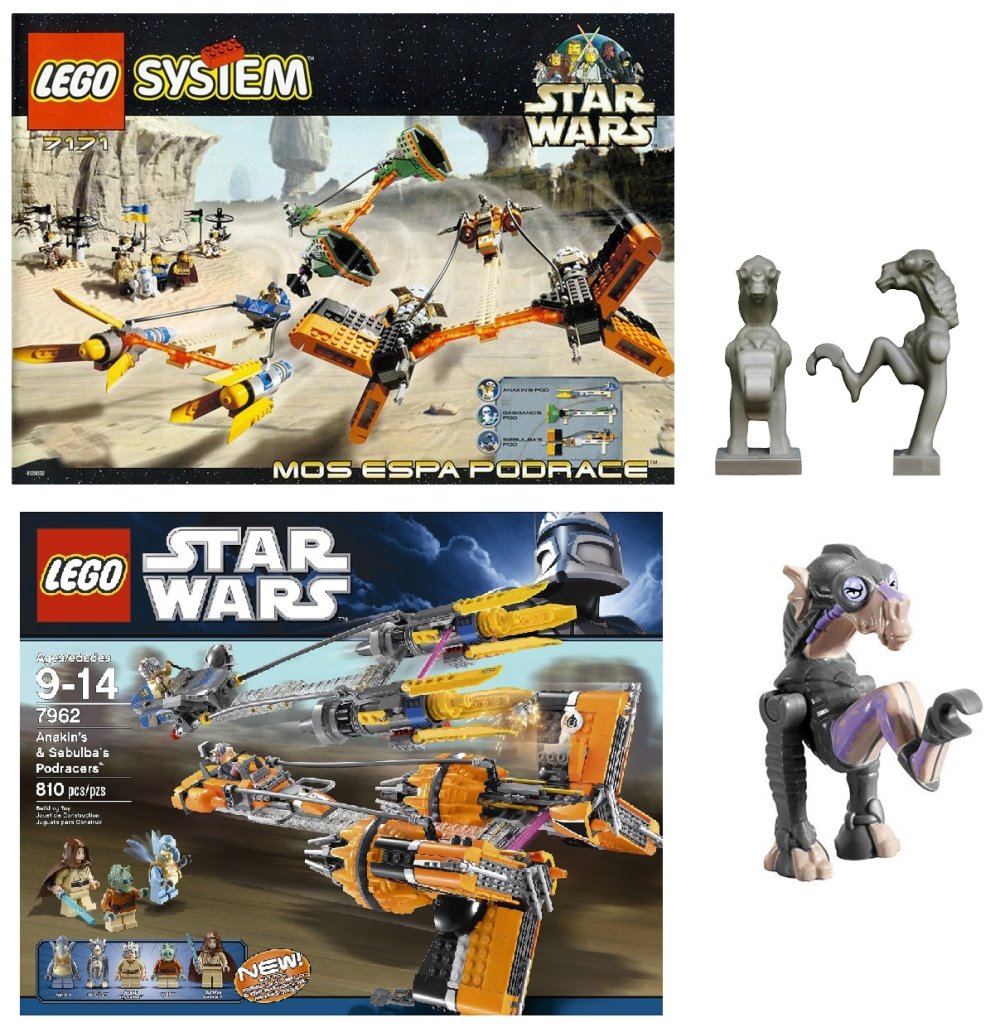 And the biggest set released for The Phantom Menace wave was that of the Mos Espa Podrace which included the podracers of Anakin, Sebulba and Gasgano along with their respective minifigures and pit droids for them all, as well as Padmé in her peasant outfit, and again minifigures of Qui-Gon Jinn, Jar Jar Binks and R2-D2.

It would take another ten years before we got a new Padmé minifigure, which was an update to this one. Which lasted only one set because the one from this year’s 20th Anniversary set is another upgrade. This time the wig piece was also new. Sebulba’s one-piece figure without moveable arms and legs saw an update in 7962 Anakin’s and Sebulba’s Podracers, which was in a way the modern counterpart to this set, even if it does not include Gasgano’s podracer. And while we got a very nice Wald minifigure, we are still waiting to this day for a new and more accurate Gasgano minifigure. And while we are happy that they added Wald, having Shmi included would have had made more sense.

Join us in a couple of weeks for the second part of our look back at the 20th Anniversary of Star Wars LEGO exploring the sets based on the Original Trilogy!