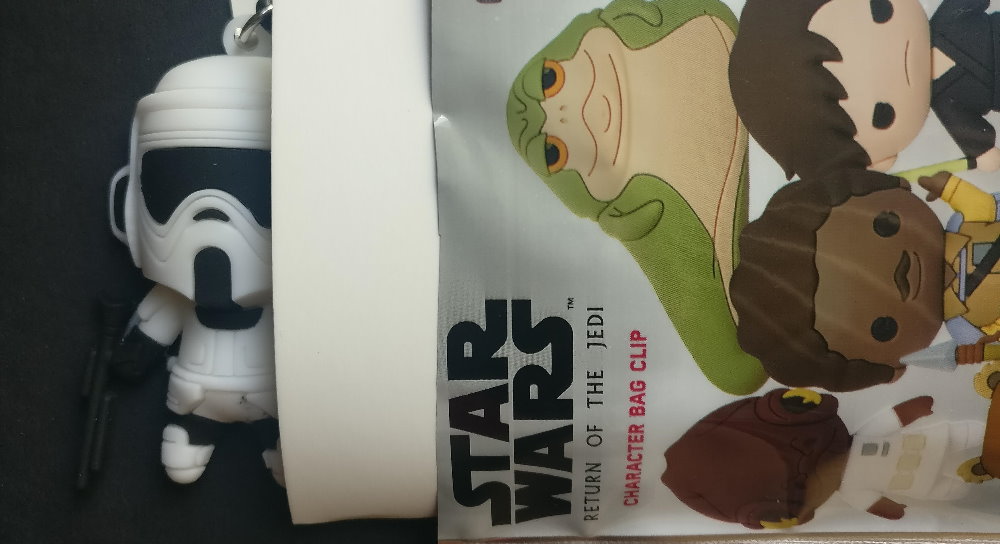 Monogram continues their ongoing series of 3D Foam Bag Clips with Return of the Jedi, and has kindly provided us with a shelf box of 24 blind bags. The box we received contained one complete base set of nine, 13 additional duplicates, and one each of the “exclusive A” and “exclusive B” chase clips.

The selection in this series nicely represents key characters (or versions of characters) introduced in the film across its three key locations: Tatooine, the Rebel fleet, and Endor. As with the previous A New Hope and The Empire Strikes Back lines, the latest series once again includes both Skywalker twins: Luke is now a full on Jedi with his blue sky-friendly green lightsaber while Leia once again gets represented twice, only now both versions of her (Endor and Boushh disguise) feature as part of the main set. R2-D2, this time holding a beverage tray, makes a return as one of the chase characters and is joined by none other than Salacious B. Crumb.

While of course long familiar with the product line, I admit this is the first time I have had the chance to look at a Monogram bag clip up close in person. Right off the bat, I appreciated that the packaging included a folded piece of paperboard to help retain the “mystery” part of these mystery bags. Once open, each one is rich in detail (even the backs!) and has a nice bit of heft to it, particularly R2-D2 and unsurprisingly, Jabba. Salacious B. Crumb stands out as an outlier on the other end of the size spectrum. Crumb’s relatively small mass, even compared to the diminutive Wicket, is more than made up by its whimsical design and is definitely a visual standout amongst the cast of characters. As with previous releases, they are all designed to be able to lay flat which works well in the context of its intended use. I was particularly impressed by Princess Leia as Boushh: the level of both color and texture detail sets it apart from the rest, and the back of the helmet even boasts painted black vents. Completely unnecessary, but totally appreciated. As for the character that already adorns my main backpack, being a long time motorcyclist I of course had to go with the 74-Z speeder bike-riding scout trooper.

The clips are made of PVC, imported from China and are officially licensed by Disney and Lucasfilm. Here’s a closer look at each clip:

Jabba the Hutt
Easily the largest clip from the base set, unsurprisingly. Despite his obvious asymmetric design, Jabba hangs fairly upright.

Princess Leia (Boushh)
Cool enough to have been an exclusive, but luckily for fans is part of the base set. Staggering amount of detail on both the front and back, especially in Boushh’s helmet.

Admiral Ackbar
Ackbar’s face lends itself well to the style of this series. Features a nice amount of detail consider the simplicity of his uniform.

Lando Calrissian
Unsurprisingly, the award for best dressed goes to Lando. Lots of great detail in his uniform, and they really nailed the blue color of his cape too.

Wicket
Arguably the simplest design of the bunch, but more than enough to adequately portray Wicket’s likeness. Smallest of the base set, which makes sense.

Scout Trooper
Plenty of great armor detail front and back, and always nice to have a trooper in the set. Doesn’t hurt to have more than one of these guys.

Princess Leia
Leia’s Endor poncho features camouflage paint on the front which continues on the back as texture detail. Above and beyond levels of detail.

Luke Skywalker
Full fledged Jedi Luke, complete with black outfit and mild scowl. The lightsaber connects to his head, which is a good design choice for stability.

Emperor Palpatine
Simple all black hooded cloak, but the Emperor’s face sports some nice wrinkle texture unique from the rest. Position of the hands is spot on.

R2-D2 (Exclusive A)
R2-D2 is back, with a simple but accurately designed drinks tray. Arguably the heftiest clip of the series, even more than Jabba.

Salacious B. Crumb (Exclusive B)
Easily the smallest and lightest clip of the series, but definitely not the most boring. Nice hair and tail detail on the back. 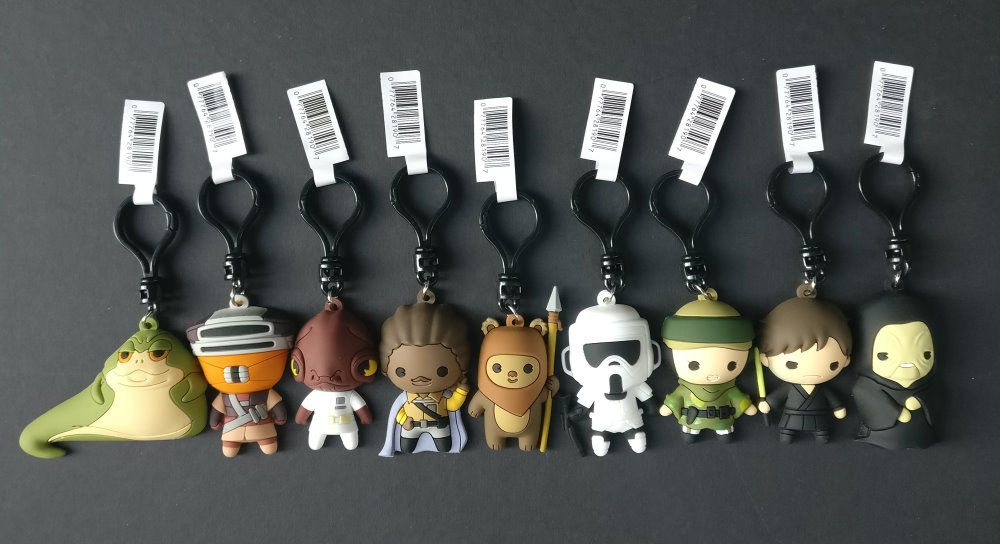 In short, if you are a Star Wars fan and own a bag, these Return of the Jedi bag clips are for you.

They are also available at Box Lunch.

Star Wars: Thrawn Ascendancy (Book III: Lesser Evil)
$22.99
Buy on Amazon This is a paid link. Learn More. Clicking the link may take you to the Amazon store servicing your country Price incl. tax, excl. shipping.  Details correct as at: 2021-07-29

The soundscape of Return of the Jedi, explained by Ben Burtt

The Secret Corellian Corvette from Return of the Jedi

Film ’83 looks at Return of the Jedi

Star Wars 100 Interviews: Ken Coombs from Return of the Jedi

The story of the TIE Vigilant: Long-lost Return of the Jedi TIE Fighter variant surfaces

Return of the Jedi: Raw footage from the death of Yoda