STAR WARS NEWS IN A SINGLE FILE
Search
Home News Collecting What a heap of junk! 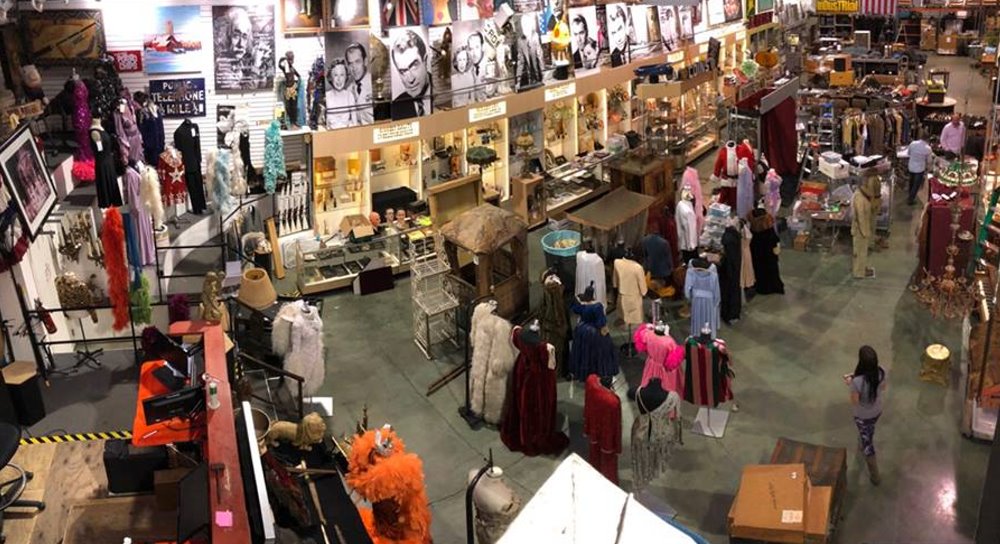 With the recent auction of random items collected by Carrie Fisher, (seen in our featured image and in an article published on Sunday) and a question asked at the end of each From Different Points of View , which is:

What is your most ridiculous random piece of merchandise you own?

Like most Star Wars fans, the Fantha Trackers have been collecting weird and wonderful things associated with Star Wars. We thought it was only right that we should share ours with you.

One of my favourite oddities is also perhaps the most practical. My Ponda Baba oven mitt from 2017s Star Wars Celebration in Orlando, Florida, was a seemingly random choice at the time. However, as I am sure many who visited the official store at the event will testify, there wasn’t as great a selection available as many would have hoped. That said, I am more than happy with my injury preventing glove. Oh the irony Ponda, such irony. Over the decades of collecting Star Wars tat I’ve come across quite a few bits of randomness. Partly because I’m not a completist by any measure, so I have random bits of product from across the years, but mainly because I’m drawn to the ephemera – the random bits and bobs that accumulate around the merchandise. Bits of swag you grab at conventions, promo pieces that pop up here and there, that kind of thing. 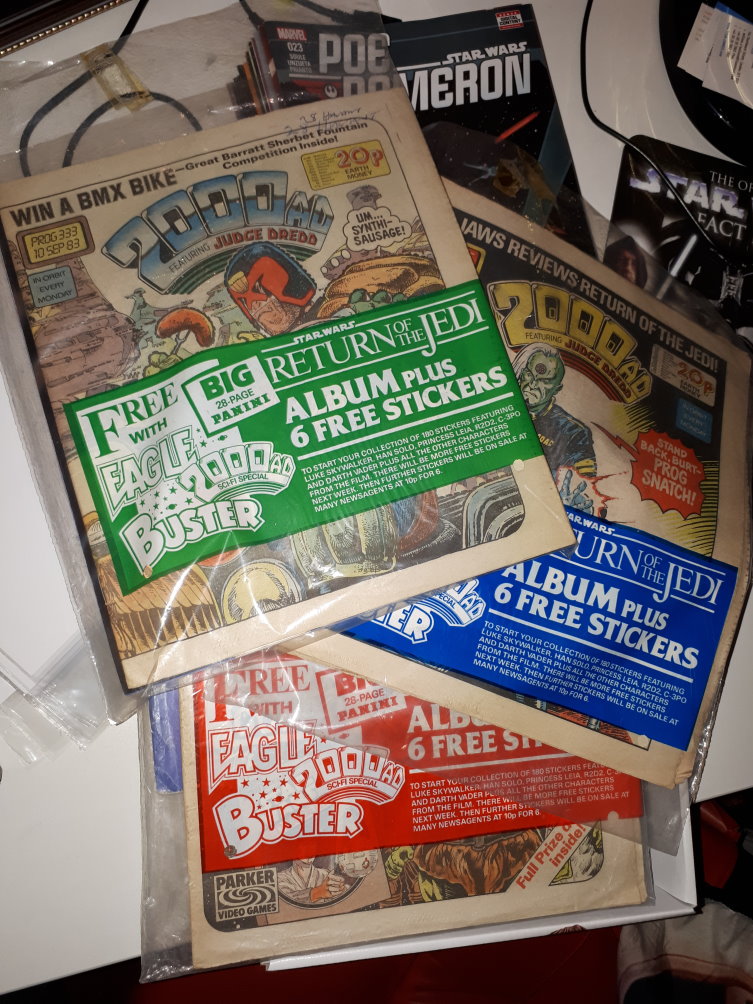 That said, one of my favourite pieces of randomness is only partially associated with Star Wars. It’s Prog 333 of 2000AD, from September 1983. It was something I picked up a few years ago, prompted by my old buddy, best man, official Fighting Fantasy author and our Roleplay Editor Jonathan Hicks, who has loved the mag since the late 70’s.

It’s bagged with the Return of the Jedi sticker album from Panini, and came with (to my knowledge) three different coloured bags, red, green and blue. I’ve put later progs, relevant to ROTJ in the other bags. In one, Robo-Jaws of the ABC Warriors reviews Jedi, and the other issue had a competition to win a Jedi video game.

Similar to some of the other Fantha Trackers, I’m not a completist collector, and even my ‘focus’ of Stormtroopers and TIE Fighters is fairly well controlled. Most of my collection therefore is pretty unremarkable, however there are some items that I acquired a few years ago that could be considered as random, partly for the fact I’m almost certainly not the target market for them. Behold my Star Wars/Hello Kitty mash up stickers, which were briefly available from ‘Hello Wars’ on Etsy. My initial reason for getting these was for them to become a ‘gateway’ to the Star Wars universe for my then young daughter who was all about Hello Kitty. Suffice to say she wasn’t massively taken with them, and hence they became part of Daddy’s horde of Star Wars tat!! There were a few designs in the works but I believe they then fell foul of the legal team at one or other of the franchises and had to cease selling them. Just as well I’m not a young Star Wars obsessed girl or I’d be almost as grumpy as Master Obi_wan if he’d found out about Anakin’s fruit-slicing escapade!!!!! 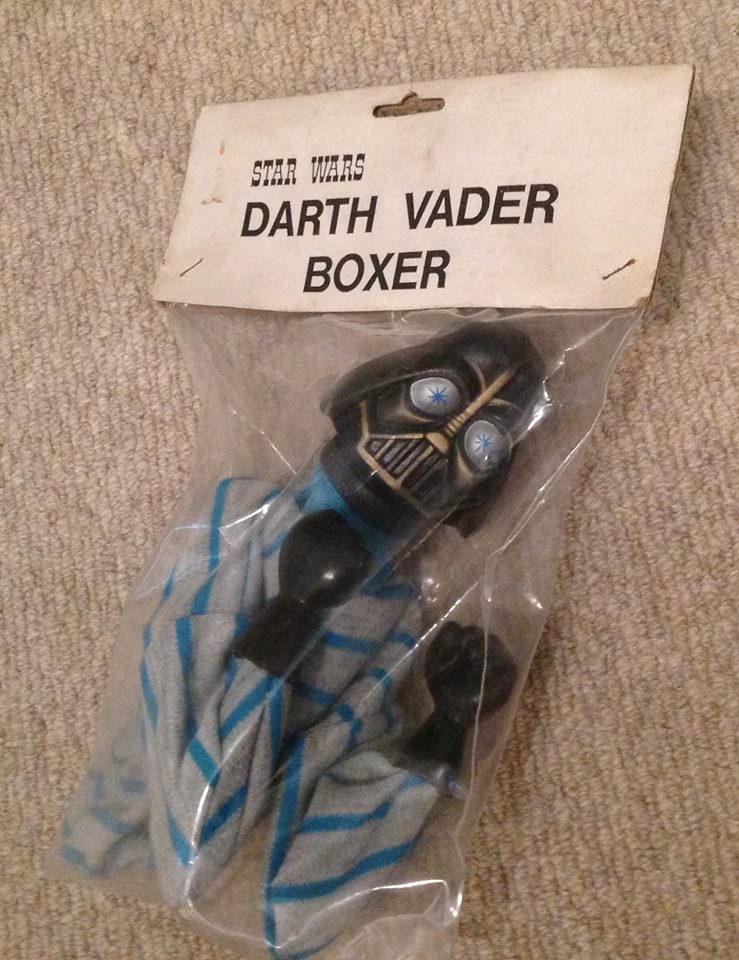 So here is the randomness that is a boxing Darth Vader puppet, with a grey and blue stripey jumper, gold drybrushed highlights on his helmet and drug induced stars in his eyes, topped off with a Wild West font on his header card, what’s not to love? 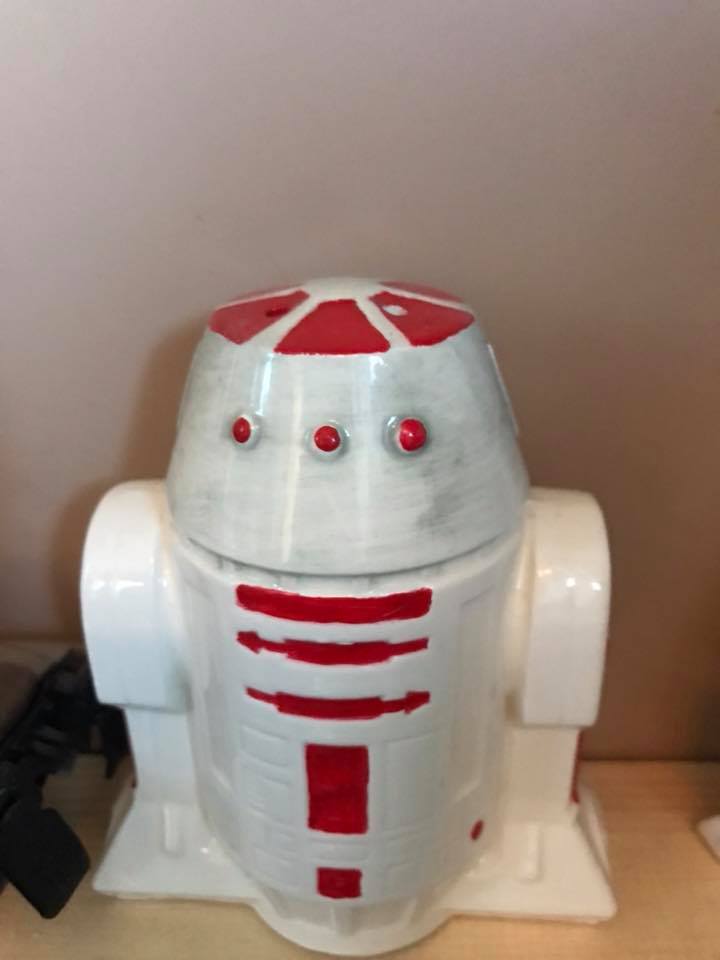 As an R5-D4 focus collector there are a surprisingly number of weird and wacky items to acquire. I think my favourite is the Pepper Pot from the Sigma Salt and Pepper set that came with R2-D2 back in 1983.

I managed to acquire this a few years ago and was delighted to see it for sale as a solo piece.

I would have bought them both if they came as a pair but poor R2 would have been taking up space needed for another R5 item. 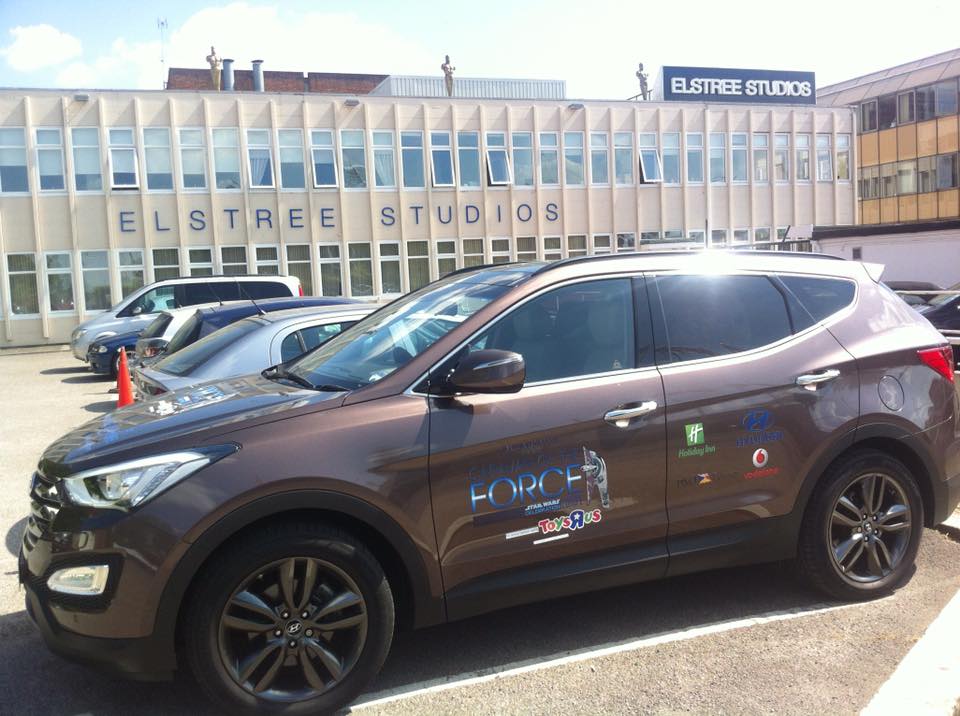 I’ve 3 of the Slave 1 stickers used on the 2 cars for Caravan of the Force” when I and friends did a charity drive for Lucasfilm taking Jeremy Bulloch from his home across Europe to Star Wars Celebration in Germany!

Here they are pride of place! 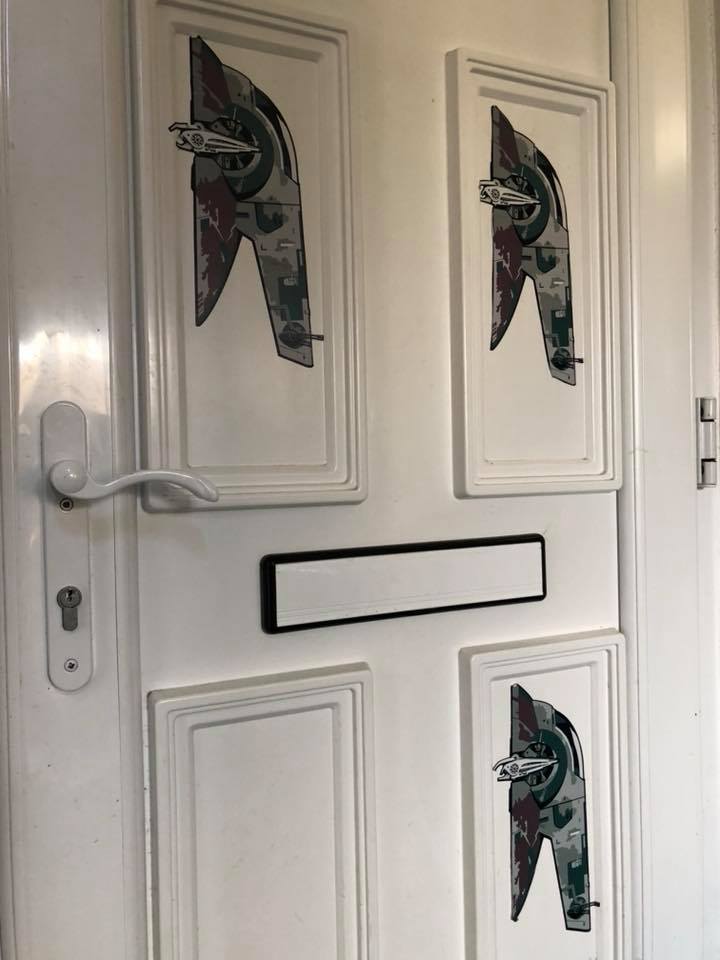 So included in my collection of randomness is something that Rey of the desert planet Jakku needed for her survival ! 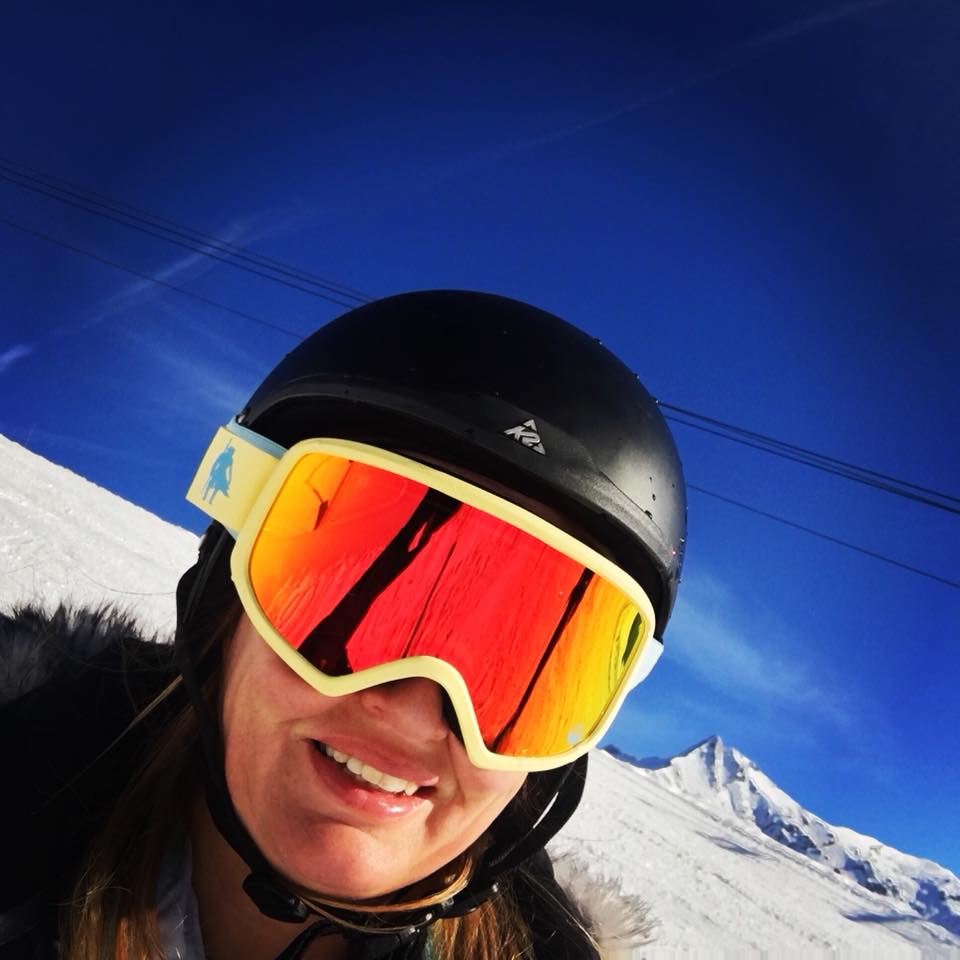 A pair of ski goggles by Snowboard and Skigear maker Burton and ANON. In my quest for a bit of Star Wars apparel for skiing I searched for Star Wars and got these!

I’m still puzzled by the link between Rey and Skiing however I love them and they are actually great in most ski conditions! ( I still don’t want to go back to Jakku though!)

They did a lot of strange merchandise for The Phantom Menace. Here is my sad Jar Jar mug. It’s impossible to drink out of and is neither dishwasher or microwave safe. They couldn’t even make him happy, and instead there is this sad and solemn Jar  Jar.

The best thing I can say is that I didn’t buy it myself. From time to time people leave things on my desk at work, after all I like Star Wars so I must love all Star Wars-related things. It is a gift so I will never get rid of it, but I’ve relegated him to penholding duties and will not try to drink from it again.
Megan Zomboracz Cullinan Back when The Phantom Menace came out, I was full-speed into the Star Wars merchandise train.  I was collecting action figures, puzzles, and even the merchandise from the restaurants that were a participating sponsor (Taco Bell, Pizza Hut). I even went so far as to collect the Pepsi soda cans that had the characters on it!
Those cans are long gone, and I eventually slowed down on collecting, only picking up things here and there. But for birthdays and Christmases, I would sometimes get Star Wars merchandise from my family. My sister April even started making things for me.  This is where we get to my most random piece of Star Wars: she made me an Admiral Ackbar mug cozy!!!
It’s so random, but I love it so much!  I’ll always have Ackbar to protect my hands from the intense heat of my hot tea!
Jazz Kopeček Rathore
Who knew I needed this in my life, I have yet to build it but it’s a Japanese Star Wars-inspired droid model kit with a swastika sticker for Artoo’s dome!