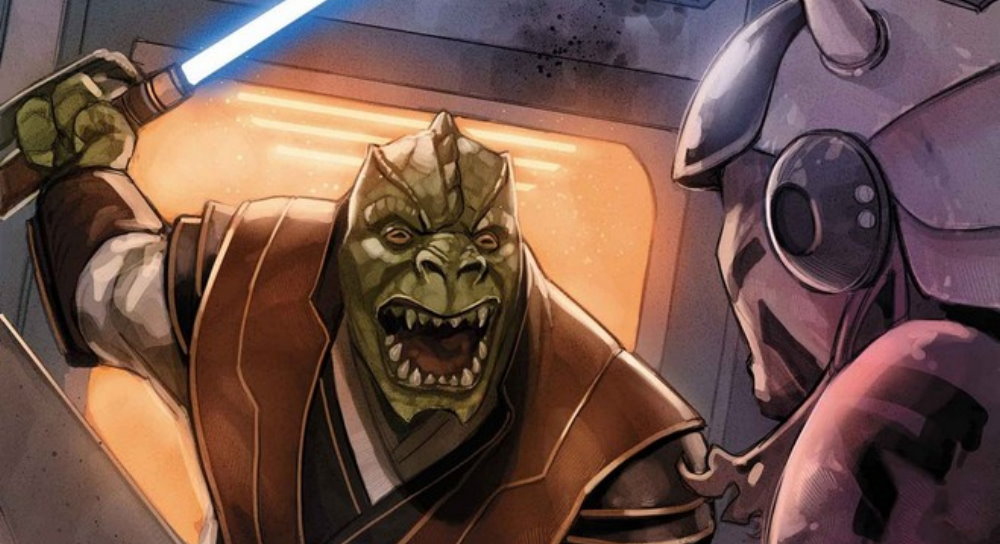 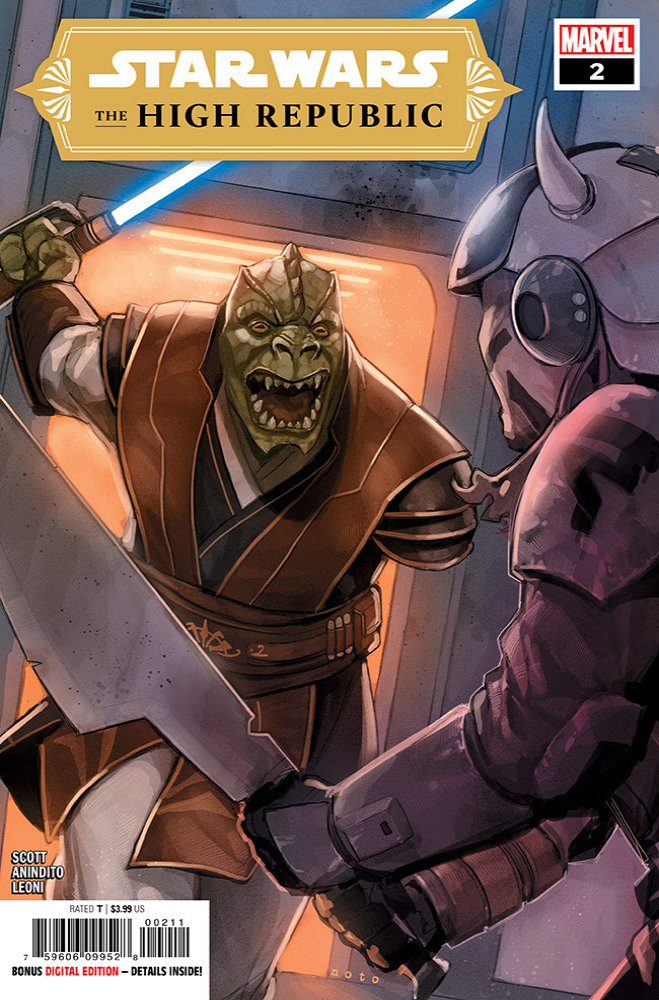 The galaxy is at peace, ruled by the glorious REPUBLIC and protected by the noble and wise JEDI KNIGHTS.

As a symbol of all that is good, the Jedi launch STARLIGHT BEACON into the far reaches of the Outer Rim. This new space station will serve as a ray of hope for the galaxy.

Young Keeve Trennis triumphantly passed her trials and is now a Jedi Knight. But her master, Sskeer, is deeply troubled. Something is very wrong….

While colour is often an unheralded but key element of comic book storytelling, rarely is it so refreshingly implemented as it has been in the first two issues of The High Republic. While Cavan Scott is as ever a steady and confident hand leading us through the galaxy, and pencilling/inking team of Ario Anindito and Mark Morales etch some firm and pleasing pages, colourist Annalisa Leoni bathes those panels in lush and engaging colours. For a new era, one still finding its feet with the readership and within in the wider continuity of the saga, her choice of subtle, strong and vibrant colours beds us even deeper into the world. Again, often overlooked but here every bit as essential as the words and the images.

In this the second issue, originally intended to be the first but shifted back to allow Keeve Trennis to be given more backstory in that dazzling first issue, we’re off on a mission as Trennis, her Trandoshan Jedi Master Sskeer and Kotabi twins Ceret and Terec head to the Kazlin system where they find the wreckage of a ship, dead bodies scattered in the vacuum. We quickly learn as they do that this is no accident when the ship turns out to be billowing with Nagnol gas, deadly to the huge Hutt they find dead and pockmarked with blaster bolts. Sskeer identifies a type of barley on the ground and once scanned it’s found to be a component of bacta, something the galaxy needs plenty of in the wake of the Great Disaster.

While these investigations are going on it’s clear that Sskeer, badly injured in a prior engagement, isn’t himself. Sskeer and Terec are attacked, and the Trandoshan engages with their attacker, a Nihil pirate who drops down silently to attack but is cleaved in two by Sskeer. and then hacked to pieces as the Trandoshan goes into a fit of rage. After reporting back to Starlight Beacon, Jedi Master Avar Kriss warns Sskeer not to demonise their enemies, and after identifying the grain, Kriss sends Sskeer and Ceret to Sedri Minor on the Periphery and herself travels to the Hutt ship with Vernestra Rwoh.

Once there, Sskeer and Ceret meet with the locals who are less than pleased to see Jedi on their world, and while Sskeer talks to the locals a curious Ceret wanders off and is captured by an unknown assailant, an action his twin feels acutely far away on the Hutt ship. We end the issue as Sskeer runs into the field where there’s no sign of Ceret save for his discarded lightsaber left behind.

This really has been a strong start to the series from Scott and company, building on the bedrock of Light of the Jedi as the galaxy is shook by the Great Disaster. Already, after just 2 issues we’re invested in these new characters and hungry for more, which can be nothing but a positive sign. There’s a fresh perspective here, a different feel and outlook on something deeply familiar to Star Wars fans. For the first time in a long time, this can’t be miscontrued as coming from a different era; this is distinctly ‘High Republic’, and for the future of publishing and the continued interst of fans old and new that is a very encouraging move. Tip of the bucket to all involved for the stories so far and for making issue 3 a must-read.

Star Wars: A New Hope
$19.99
Buy on Amazon This is a paid link. Learn More. Clicking the link may take you to the Amazon store servicing your country Price incl. tax, excl. shipping.  Details correct as at: 2021-03-01
SaleBestseller No. 3

Star Wars: Return of the Jedi (Theatrical Version)
$19.99
Buy on Amazon This is a paid link. Learn More. Clicking the link may take you to the Amazon store servicing your country Price incl. tax, excl. shipping.  Details correct as at: 2021-03-01
Bestseller No. 5

STAR WARS The Black Series Credit Collection The Mandalorian Toy 6-Inch-Scale Collectible Action Figure (Amazon Exclusive)
$24.99
Buy on Amazon This is a paid link. Learn More. Clicking the link may take you to the Amazon store servicing your country Price incl. tax, excl. shipping.  Details correct as at: 2021-03-01
SaleBestseller No. 6