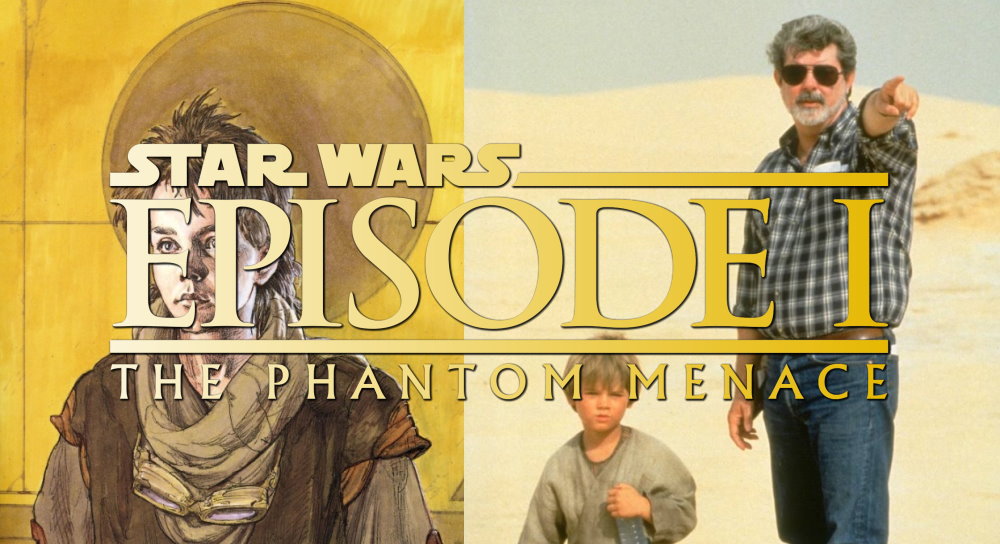 The teaser trailer for Episode I informed us all that ‘Every journey has a first step’, and Anakin’s journey started out on the desert planet Tatooine where he lived with his mother Shmi as slaves under the ownership of Watto. 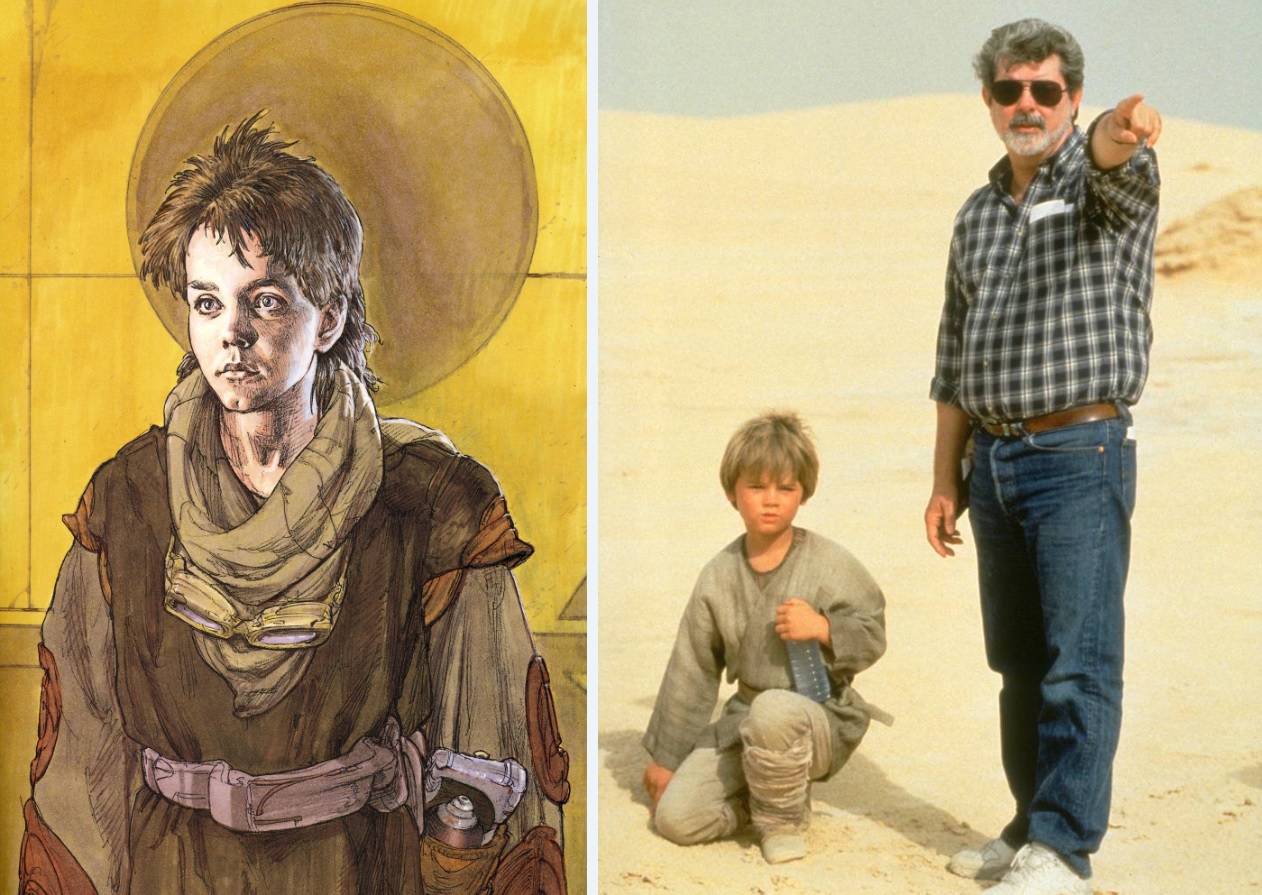 Anakin – Writing the screenplay for Episode I was not easy for George Lucas, and one of the main things he struggled with was the character of Anakin, and in particular his age. Originally Lucas conceived the boy as being 12 years of age, which made a lot of things easier. For example it is easier to find and cast someone around that age. Also certain elements of the storyline would work better as it is more believable for an adolescent to ride a podracer to win his freedom, or fly a starfighter into battle to save the day. But as he was developing the story, Lucas realized that he had to lower that age or else the emotional trauma of the boy having to leave his mother behind would be less strong, which was to be an important first step on the journey towards becoming Darth Vader. So Lucas ended up lowering the age to 9, and he wrote in little moments to explain why Anakin could do certain things at such a younger age. Podracing was known to him, because he had done it before and he had the Force. Flying a starfighter? Anakin was a quick learner, as shown in a scene with Ric Olié in the cockpit of the Royal Starship on approach to Coruscant, and Anakin also had R2-D2 flying with him, to help him out.

The difficulties continued however even after Lucas has clearly defined the Anakin he wanted, because now an actor had to be found that could portray Lucas’ vision. That task led casting director Robin Gurland to talk to and interview close to three thousand children to find the one that could not only act, but also to possesses an intelligence and dignity believable to be “the Chosen One”. When Gurland met Jake Lloyd she saw something magical in him, but the boy was 5 years old at the time, which was too young. But she kept him in mind, knowing that filming would not take place for another couple of years, making Jake closer to the age he needed to be when the time would come. And sure enough, two years later the role had not yet been cast, Lloyd came in for an audition at the Skywalker Ranch. Lloyd’s energy and cheerfulness reminded Lucas of a young Luke and thus Lloyd was hired. 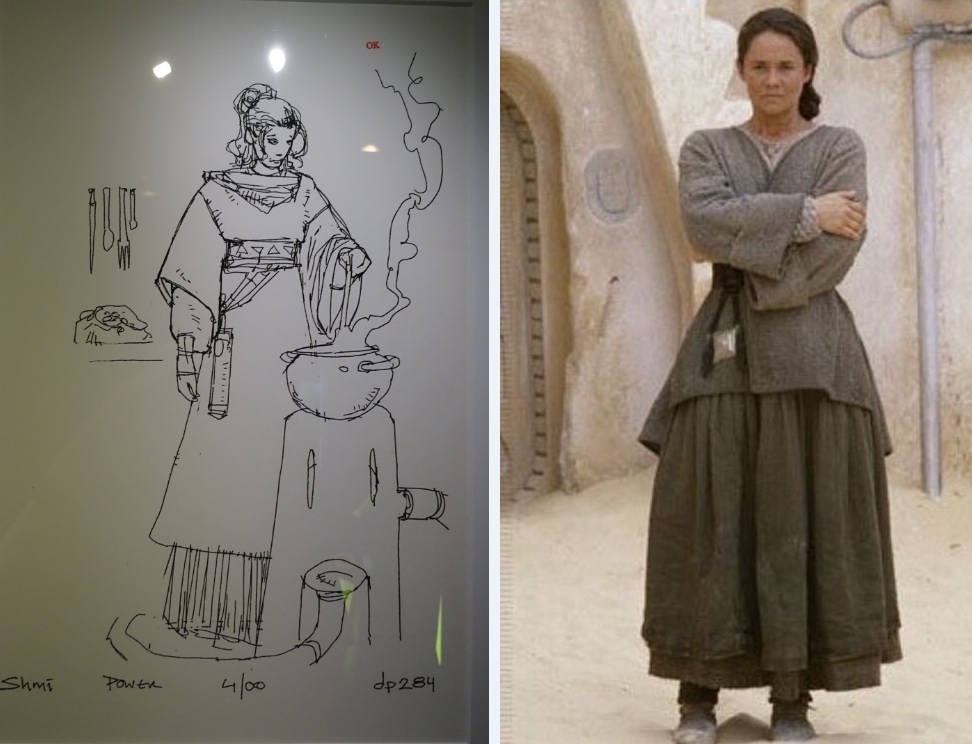 Shmi – For the role of Anakin’s mother Lucas envisioned a warm but solid woman, who had endured the hardships of living as a slave, who loves her son a lot and wishes a better life for him. At first Lucas, producer Rick McCallum and Gurland looked for someone British and more older, but the moment they looked at Pernilla August, who they knew from starring in Lucasfilm’s The Young Indiana Jones Chronicles, they knew they had found the right woman for the role. August however had some concerns about her Swedish accent, but Lucas reassured her that it was no problem at all. For a time, the earlier first drafts had her name as Shmi Warka.

C-3PO – With The Phantom Menace taking place decades before A New Hope, even the returning characters from the original trilogy had to be redesigned. C-3PO ended up as being the droid that Anakin was building and was described by Lucas as “the underskin of the droid as we know him, a man of wires”. Because of this C-3PO’s frame was too thin for Anthony Daniels to put on as a costume, so C-3PO was realized instead as a puppet, controlled by Mike Lynch with Daniels being on set to help out and of course be the voice once more. 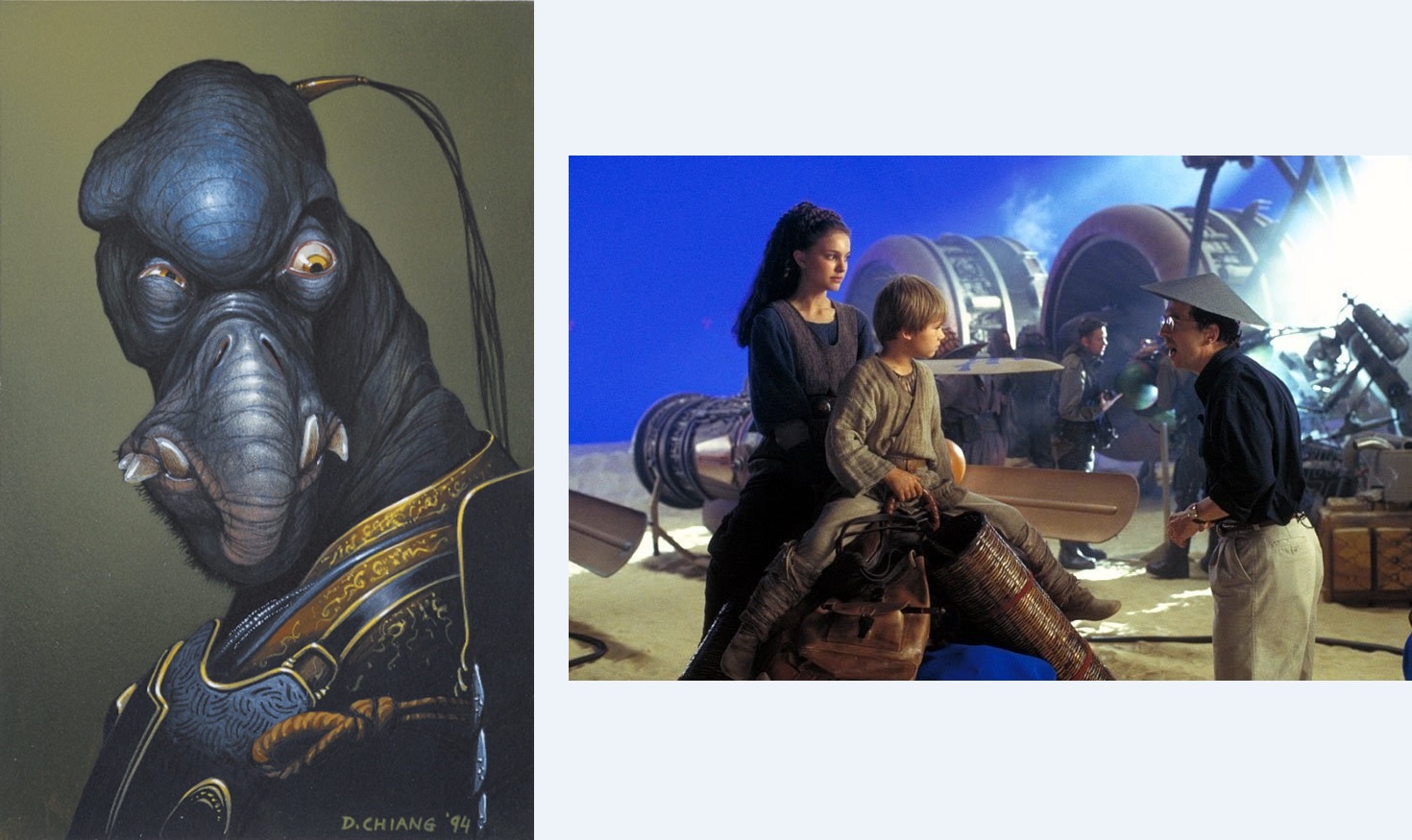 Watto – Because Lucas had to create so many new worlds, and populate them, he brought in Terryl Whitlatch, a designer with a background in zoology. Together they combined elements from one animal to that of another, be it fictional or not, creating interesting hybrids for the movie. One of these was Watto, whose duck feet were combined to a drawing of an ugly cherub-type thing with wings. The head of Watto came from a drawing by Doug Chiang (as seen above), which was originally meant for the Neimoidians when they were more pirate-like armored noble-looking characters. To help the animators Whitlatch even drew detailed skeletons of the important characters like Watto, resulting in detailed 3D models that could get scanned into the computer and then be animated. However the people of ILM encountered a problem with animating the CGI Watto, his tusks made lip-synching more difficult and it was ultimately decided to break off one of the tusks. Andy Secombe voiced the character and performed on set. The sound of the constant flapping wings was at first Ben Burtt flapping various pieces of cloth and leather, but Burtt never was too happy with those sounds. So he ended up using the sound of an umbrella opening and closing, and speeding that up.

Jake Lloyd: Family give update on his health

Will Anakin Finally Bring Balance to the Force in ‘Star Wars: The Rise of Skywalker?