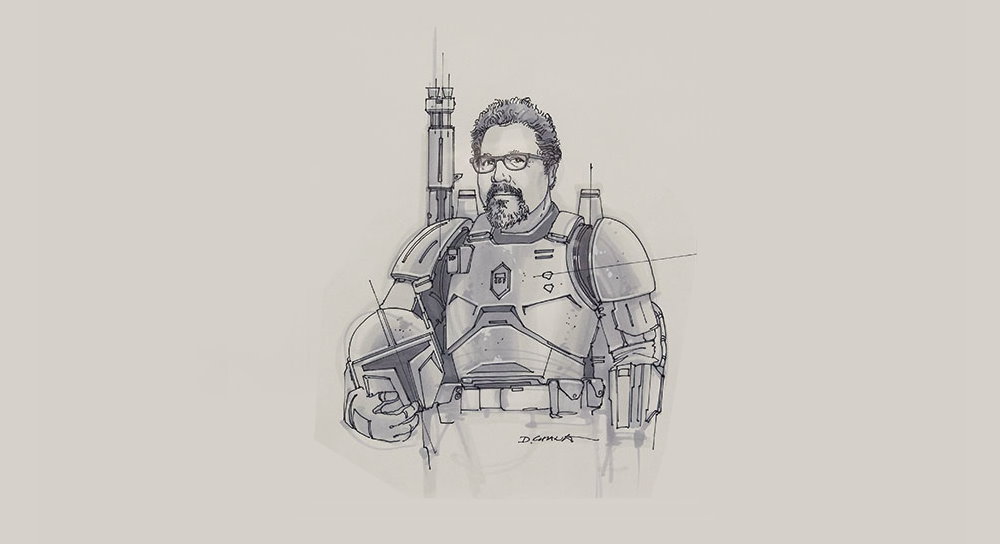 While he’s the man of the moment – The Mandalorian about to launch, with a teaser coming later this week at D23, The Lion King approaching $1.5 billion at the box office and his role as Happy Hogan in Spider-Man: Far From Home also we north of the billion mark – it seems that Jon Favreau‘s heart is very much in GFFA territory, and while he discusses his other projects including Netflix project The Chef Show and his new endeavour Golem Creations, The Mandalorian is clearly front and centre in his thoughts.

There will be people who hear “digital production” on The Mandalorian and think “Great, we saw digital production on the Star Wars prequels and it didn’t look very good.” How is this different?

Well, I would argue that the prequels are — and [George] Lucas in general is — the bedrock that all of this is built on. He is the first person that had digital photography, he was the first person to do completely CG characters. The whole notion of not having even a print [version of the film], of having everything be 0’s and 1’s, was all George. Not to mention EditDroid, which turned into Avid, Pixar was spawned out of their laboratories at LucasFilm, so he is arguably the center of the Big Bang for everything that I’m doing. It’s building on the shoulders of what he was able to innovate.

So the answer is this is 20 years later than the prequels?

This is 20 years later, and also there’s been a democratization of the skill set too. It’s no longer a few vendors innovating in ivory towers, that information has been expanded and disseminated and democratized so that effects that would cost you millions of dollars, you can do it on a PC now, with consumer-facing filmmaking tools. When George came to our set and visited The Mandalorian, he said, “Oh, we did this,” and what he meant was, “We had green screen and we were building small sets and expanding upon it.” Now, we have video walls, NVIDIA video cards that allow a refresh rate that allows you to do in-camera effects, we’re in there taking advantage of the cutting-edge stuff.

You showed me some of the video wall work, and my first thought was, “Why the hell does J.J. Abrams go to Jordan?”

Every film is a puzzle, and there’s a freedom that you have as a storyteller if you go to the real environment; it affects you and the human element. When you see Lawrence of Arabia, how much of that is informed by really being there and not shooting it in Calabasas — I think you get a different movie. The way I work and the stories I’m telling are geared specifically toward what this technology has to offer, so I could not make Episode IX using these tools. If you notice, there’s a certain look that the Mandalorian lead character has, there’s a size that the spaceship is, there’s a scale that lines up with the original trilogy. I’m trying to evoke the aesthetics of not just the original trilogy but the first film. Not just the first film but the first act of the first film. What was it like on Tatooine? What was going on in that cantina? That has fascinated me since I was a child, and I love the idea of the darker, freakier side of Star Wars, the Mad Max aspect of Star Wars.

People might assume that Disney asked you to figure out what Star Wars looks like on TV, but the opposite is true: You came to them, right?

And by that you mean using the technology that you’ve been developing and doing it on the scale that you’re comfortable with?

I had been thinking about Star Wars since Disney acquired Star Wars. When I was working on Lion King, it was a full-time job for a few of the years, but there was a lot of time when I just had to be available for three very focused hours a day. The TV model allowed me to be an executive producer [on Mandalorian], which allowed me to, on my own time, write everything. It’s a lot like being a chef. You write the menu, you staff up with people who are great at what they do, you oversee and help guide the people who are actually cooking the food, working the line, and then at the end, you plate.

So that’s why you didn’t direct the episodes?

That’s why it worked well for Disney. Plus, Disney+ is emerging and there’s an opportunity to tell a story that’s bigger than television, but you don’t have the same expectations that a big holiday release has, which to me isn’t that type of Star Wars that comes out of me. The type of Star Wars that I’m inspired to tell is a smaller thing with new characters.

But Bob Iger says Disney+ is the future of the company. So there is some pressure on this anchor show.

It’s a dense and fascinating interview that goes well beyond his work on Star Wars, so click here and have a read.