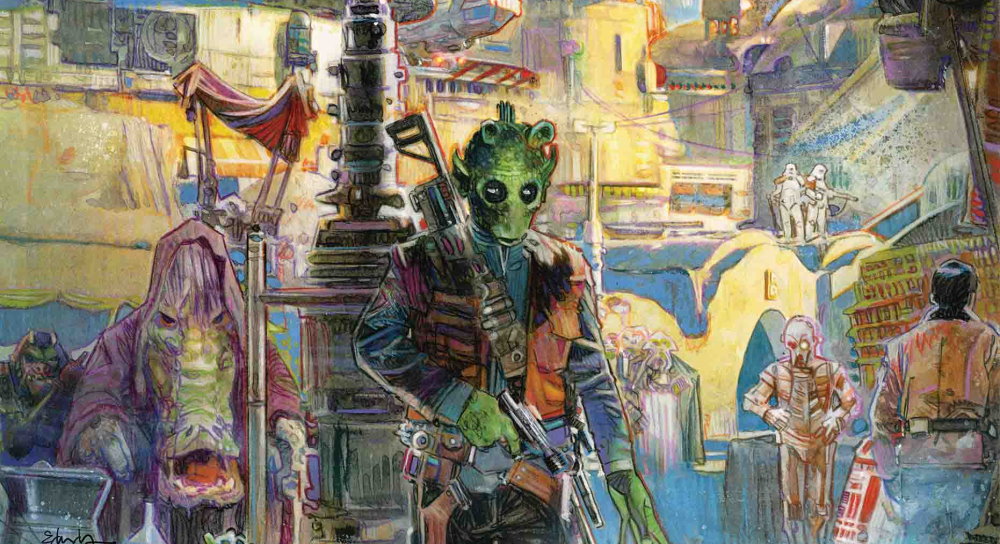 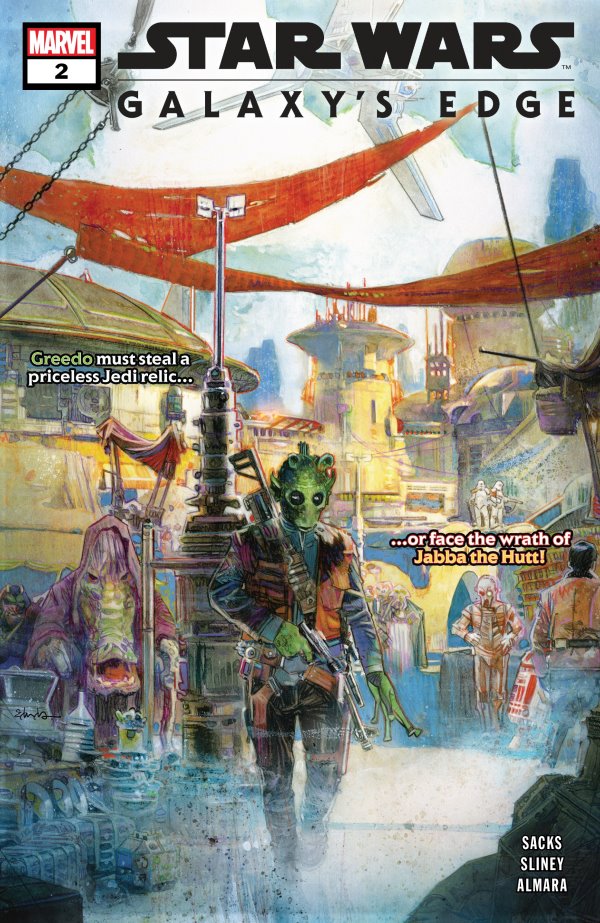 The mysterious Dok-Ondar is known far and wide as a collector and trader of only the most valuable artifacts money can buy. But a trio of outlaws are after a fabled relic that even Dok-Ondar fears…and they’ve hatched a scheme to swindle the Ithorian out of it.

But with the evil First Order occupying Black Spire, time is running out to pull this difficult heist off….

After the satisfying first issue of Galaxy’s Edge, featuring Han and Chewie and more than a few sarlaccs, we head into the second issue with Han’s drinking buddy Greedo front and centre, and once again the issue blends past with present as it kicks off during a key scene of Revenge of the Sith – Order 66 has been initiated and Ki-Adi-Mundi stands on the bridge on Mygeeto, about to head into battle as his Clone Troopers turn on him and as he falls, his lightsaber slips out of his grasp.

Hop to the present as the First Order enter Doc Ondar’s, with questions about the Resistance and how the Ithorian antiques dealer came to possess a Jedi weapon such as this. A tough question indeed, and one that is watched with interest by the crew of a freighter docked at the outpost who have their own plans for the lightsaber. As with the first issue, we time hop from past to present and back again, and as we step back to the past we find Greedo attempting to capture a cybernetically enhanced Givin for Jabba the Hutt, and much as we might expect for our hapless Rodian, things don’t go entirely to plan.

Just how hapless, you’ll need to read to find out, but suffice it to say that things go south for Greedo, to the level of facing Jabba in his Tatooine courtroom where Doc Ondar appears and saves the day, saving Greedo and purchasing the lost lightsaber of Mundi from Jabba. And in the present, a sith relic being hid from the prying eyes of the First Order becomes the heist target for the watching criminals.

This series, while lightweight in story, is certainly a lot of fun, skipping through the timeline from Clone Wars era to just prior to A New Hope and the sequel era. The art by Wil Slimey is attractive, and the covers by Tommy Lee Edwards are just superb, poster worthy pieces of art. The writing on the cover is certainly confusing though; ‘Greedo must steal a priceless Jedi relic, or face the wrath of Jabba the Hutt’. He finds the lightsaber by accident, and Jabba has less than no interest in it, hence the quick sale to Doc Ondar so that’s more than a bit misleading (and Greedo is never seen at Black Spire, his mission is on Mygeeto and his grovelling to Jabba is of course on Tatooine) but nevertheless Ethan Sacks weaves a light and breezy tale that continues to embed Galaxy’s Edge into the Star Wars canon, making it an increasingly kep location way out beyond the Western Reaches.

The perfect title to release while Galaxy’s Edge is hot, and another interesting addition to the wider story. And remind me never to trust Greedo with a grappling hook ever again.