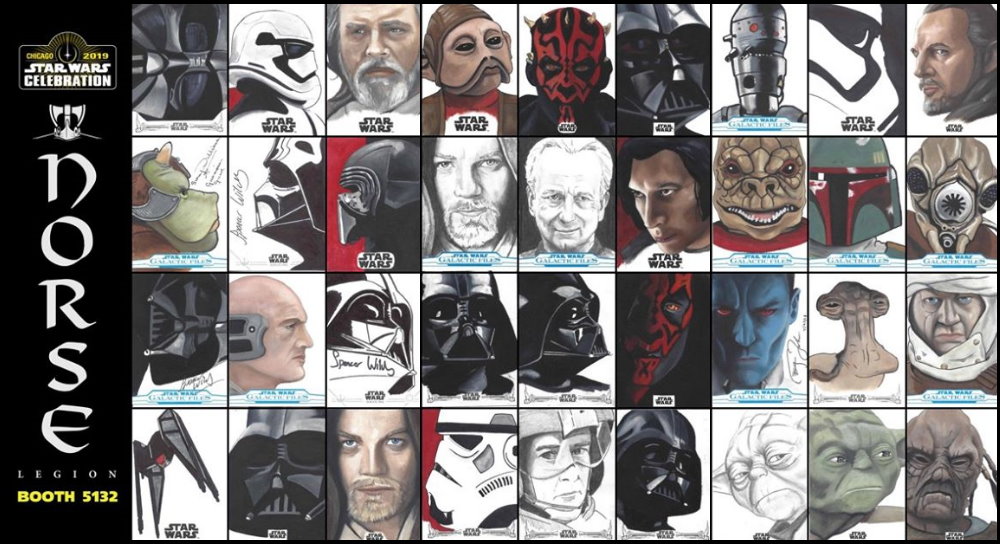 Our friend Kevin Liell suffered some bad fortune at Celebration Chicago, with the theft of a significant amount of original artwork – $10,000 – from his table. Thanks to the quick thinking of the security at McCormick Place and the Chicago Police, a good portion of his losses were recovered. Wishing to give those officers some recognition, Kevin got in touch and asked if he could give his thanks for their quick and efficient actions.

I attended Star Wars Celebration Chicago, as an artist working at the convention, I had a booth at the show, and I represented one of the actors who came to the convention. After the closing of the first day, Thursday April 11th, I had 62 individual original Topps sketch cards stolen at the event. All of these Topps sketch cards were hand drawn or painted by me and where in a photo album, secured by a steel cord. Sometime between 8:30 and midnight, someone came in the my booth and cut the Steel cord Securing the photo album and stole all my sketch cards. The sketch cards had an estimated value of around $10,000, as each card was worth about $100-$200 each.

The person who stole them wasted no time in putting the cards online for sale. He actually sold the first of my cards on Friday April 12th, while I was still at the convention.

When I discovered the cards missing on that Friday, I immediately posted an image of all 62 cards online. Some quick acting Star Wars fans found them online and reported where they were being sold to me. This information was quickly given to the Chicago Police Department. Detectives Stoll and Navarro diligently worked the case and eventually arrested the perpetrator within two weeks, far sooner than I could have possibly hoped. Most of my cards have been retrieved. Unfortunately some were already sold by the perpetrator, but had the investigation taken longer, even more would have been gone. The police were able to quickly move in and arrested the individual on felony charges. He is currently being held in a $50,000 bond with a court date on May 2nd.

The quick and efficient work by Detectives Stoll and Navarro, and with the help of some Star Wars fans helped to end what I would call the worst event of my professional career.

Before I new of the online sale of my cards, during the second or third day of the investigation, Detective Stoll called to inform me (after he spent hours reviewing security video) that there was no clear footage of the robbery. This call was a low point for me, but Detective Stoll explained that they were still working the case, and he then ended the call by saying: “I’m very sorry this happened to you in our city.”

This last statement told me of his pride in his city and in the Police Department itself, Which of course has gone through some public scrutiny lately. Detective Stoll’s statement gave me confidence for a positive outcome. After the call, I turned to my friend and said “that cop is going to get him,” which he did in less than two weeks.

I can not express enough the appreciation and respect I have for Detectives Stoll and Navarro, The security at McCormick Place, ReedPop and most importantly the Star Wars fans who all helped in quickly resolving this situation.

A look back two years to Star Wars Celebration Chicago 2019