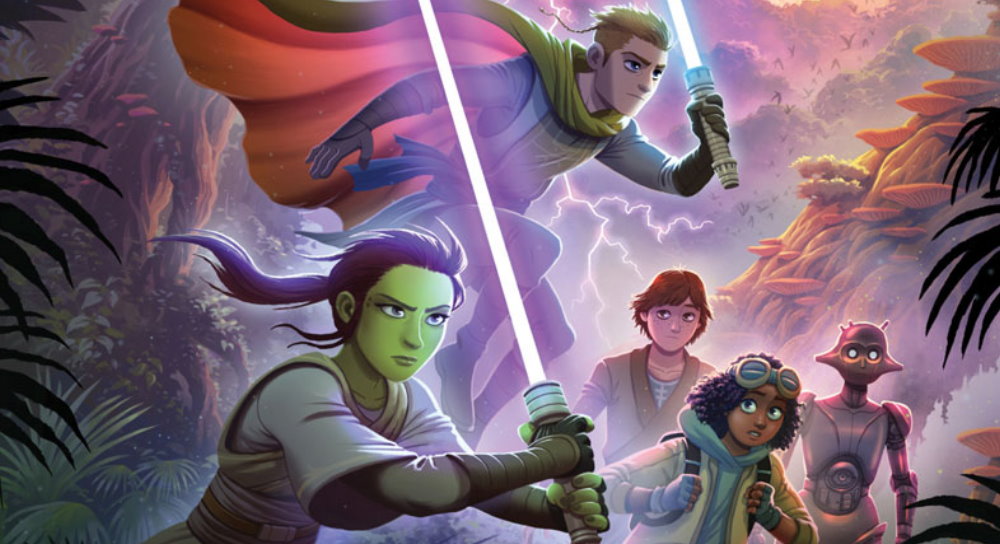 It’s a busy day for book excerpts and reviews here on the site as we now bring an excerpt from the second chapter of Star Wars: The High Republic: A Test of Courage by Justina Ireland, the mid grade novel that arrives on 5th January 2021.

Klinith grabbed both her blaster and her knives, because in stealthy situations knives were sometimes the better option, placing them in her toolbox. Gwishi grabbed his own blaster plus his face mask and a canister of ovax gas, which he placed into his tool kit along with the rest of his gear. The gas would be necessary to incapacitate the mechanics on board the Steady Wing, a luxury liner they had followed to Port Haileap, a remote outpost on the edge of the Dalnan sector.

The plan was simple. They’d been told to board the Steady Wing and sabotage it so that no one on board was left alive. The ship was scheduled to pick up someone important to the Republic on Haileap, and the Nihil needed to let the Republic know they were not welcome in this part of the galaxy.

Not now, not ever. The Republic was bad for business.

Before disembarking Klinith went back and grabbed one more blaster, small enough to tuck into the top of her boot. Sometimes things went wrong and people got hurt. That was Klinith’s favorite part.

There was a short walk through thick jungle, the marblewood trees large and covered in blue moss, before the busy docking station came into view. Klinith had purposely chosen an out-of-the-way landing space to allow her and Gwishi to enter undetected. The last thing they needed was too many people asking questions. Manifest or not, less attention was better.

“That’s it right there,” Gwishi said, pointing to an enormous ship that took up most of the landing yard. The thing was easily ten times the size of the cargo hauler they’d stolen, and Klinith felt a tendril of fear sneak through her as she considered that.

“How in the seven Genetian moons are we supposed to destroy that?” she asked.

Gwishi sighed. “From the inside. You’re Nihil. Act like it and stop worrying.”

“I’m not,” Klinith said. She had no problem with the mission; it just felt more serious than her previous jobs, like she’d been promoted. And if this job was successful, she surely would be. She’d rise within the Nihil, maybe even report directly to Kassav himself.

Klinith and Gwishi were close to the ship, and she grinned with anticipation. Everyone would be talking about the destruction of the Steady Wing. “I’m excited. This is going to be monumental. I’m just sad we don’t get to smash anything.” Gwishi watched her with unblinking eyes. “Come on, let’s go.”

The port was teeming with people from many different systems. As the last stop before some of the most dangerous uncharted regions in the galaxy, Port Haileap, like other ports on the edge of what was considered civilized space, was a place for ships to refuel and for people to catch up on news from back home and relax before spending time in a cramped ship. A large landing area stocked with supplies and surrounded by a ring of shops, it was just like most of the outposts Klinith had been to, with the exception of the giant marblewood trees that were visible in the distance, stabbing the violet sky with their green crowns. Humans, Trandoshans, Pantorans, and more weaved among one another in a throng, making their way to the various shops lining the outside edge of the landing zone. Klinith saw a sign advertising gambling down a far hall and her hands itched. It had been a while since she’d had a chance to play rykestra, a popular dice game. But she had more pressing issues than a game of chance.

Klinith and Gwishi made their way up the boarding ramp to the Steady Wing. The Republic guards standing at the top of the walkway were laughing over something and paid the pirates no mind as they walked past. They blended in perfectly with the other mechanics walking on and off the luxury liner. Once they were in the ship proper, Gwishi slapped Klinith on the back.

They walked through the hallway, and Klinith felt a familiar anger rising deep in her middle. It was a grand ship, with beautiful golden ﬂoors and silver walls that featured a ﬂower-patterned screen that shifted its design every few seconds. She tried to imagine what it would be like to stay on such a ﬁne ship. She couldn’t, and that made her angrier than anything else. She couldn’t wait to destroy the Steady Wing and watch its beauty fracture in the emptiness of space.

Klinith followed Gwishi, stopping when he pointed to a plaque on the side of the hallway. The ship was so large that there were maps every few meters to show how to get to different areas.

“That’s where I’m headed.” Gwishi pointed to a blank spot before patting the heavy tool kit he carried. “I’m going to leave everyone a few surprises. You go and make sure the escape pods aren’t any good, either. The last thing we want is survivors. This should be a disaster that will make the Legacy Run look like a day at the fair.”

Before Klinith could respond, Gwishi turned and started off down the hallway, leaving her to ﬁgure out where the escape pods were held. After a few moments puzzling out the map—she wasn’t the best reader, and the map seemed purposely confusing—she ﬁgured out they were on another deck.

When Klinith arrived where the escape pods were, she discovered she wasn’t the only one there. A maintenance droid buzzed around the bay. At her entrance the droid stopped.

“Are you here to sign off on the pods?” the droid asked. It was a little box of a thing, with several arms sticking out at every angle.

“Yes, but we need to upgrade them. Take out the comms and nav systems.”

The droid rolled forward and back as it processed her command. “I have no such instructions. I must update my feeds to receive new instructions.”

There was a large, heavy hydrospanner on the wall, and Klinith lifted it in her hands, testing the weight. “Oh, I have your updates right here.”

She slammed the heavy tool into the top of the droid, again and again, until the droid was little more than random metal parts. Klinith smiled at the destruction all around her.

She’d gotten to smash something after all.

Star Wars The High Republic: A Test of Courage
$11.99
Buy on Amazon This is a paid link. Learn More. Clicking the link may take you to the Amazon store servicing your country Price incl. tax, excl. shipping.  Details correct as at: 2021-06-13